The new, not-yet-shipping Canon C700 made an appearance at the Northwest Filmmaker’s Festival Summit in Portland, Oregon today. There are only three prototypes in the USA, and the other two are at SMPTE NY, so this was a special privilege.

I’m not going to run through the camera’s particulars—Jon Fauer has already done that spectacularly—this is a more informal look. Tap or click any picture for a bigger version. 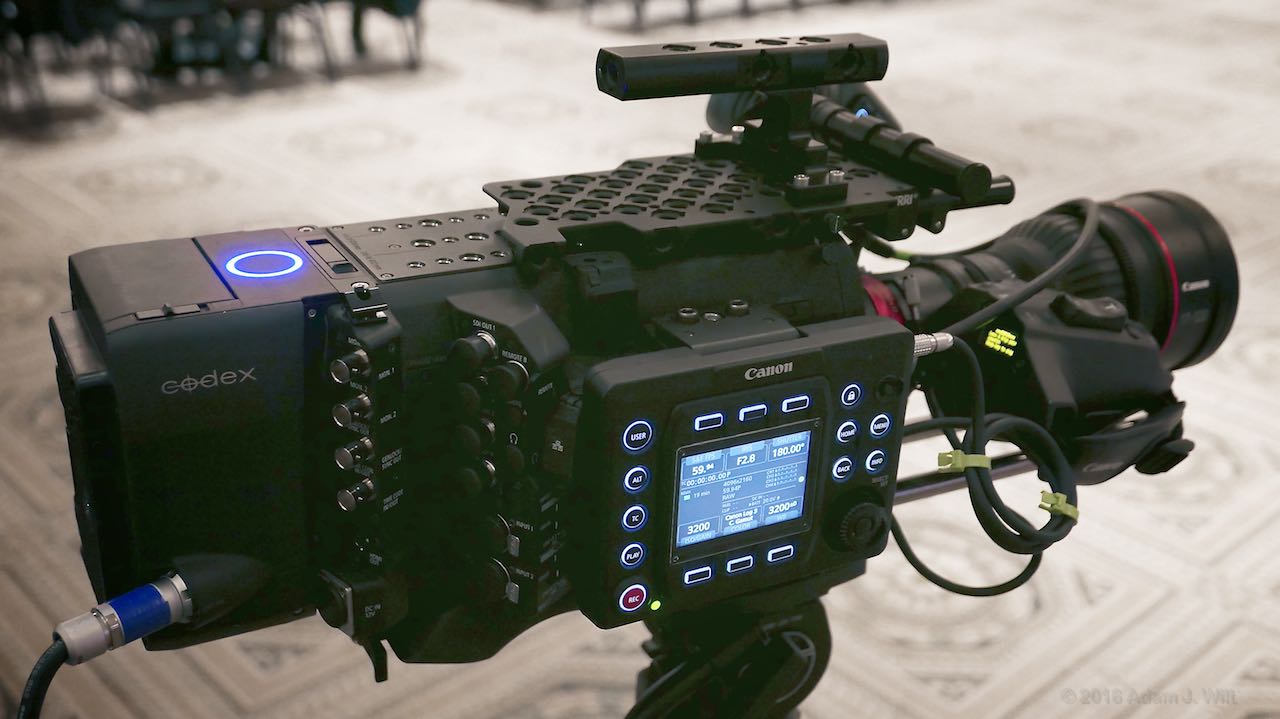 This camera is set up with Arri rigging: lightweight rod system, cheeseplate, EVF mount, and top handle. It’s a bit different from the standard setup in Jon’s publicity pix. Note the hinged, separable control panel, which replicates the display and most of the controls on the left side of the C700. 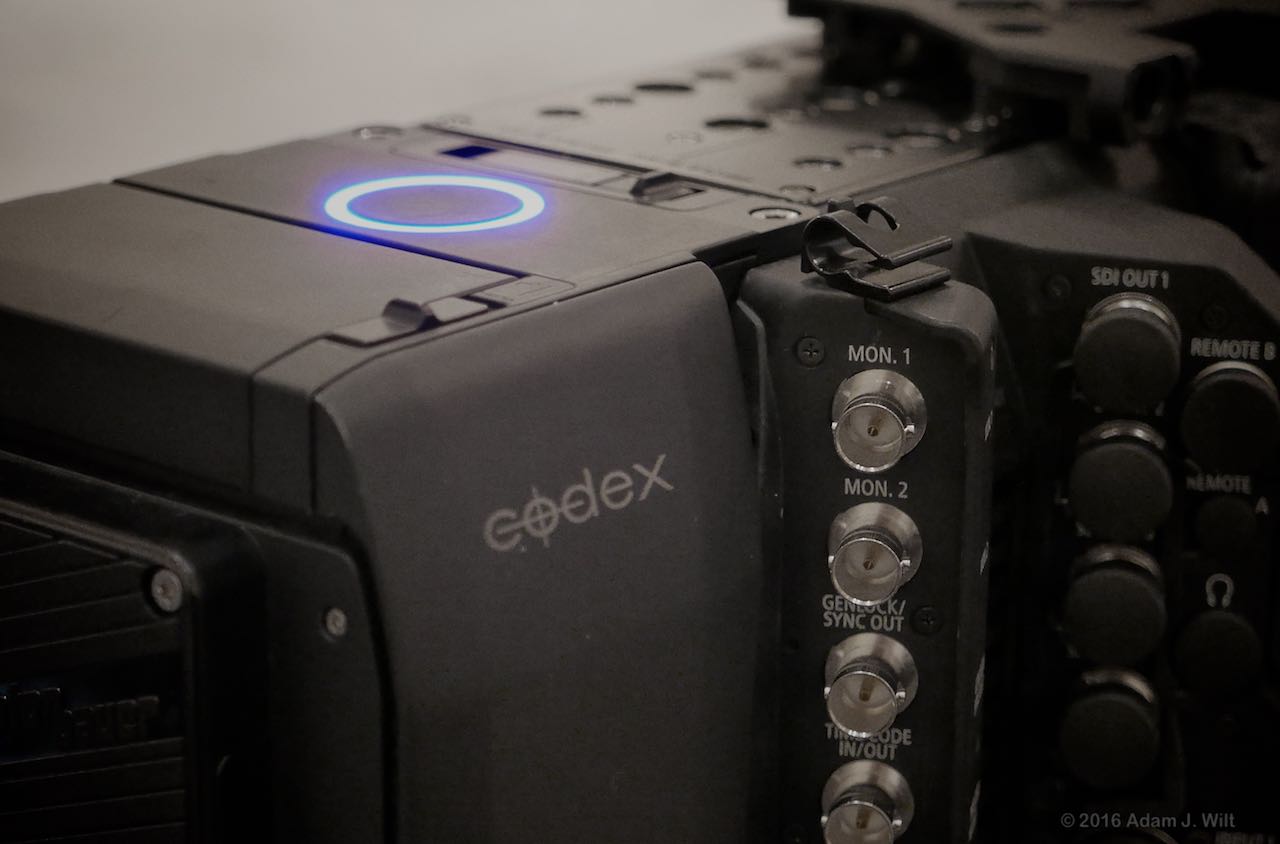 This C700 has the optional Codex recorder on the back. The Codex lets you record raw or ProRes. 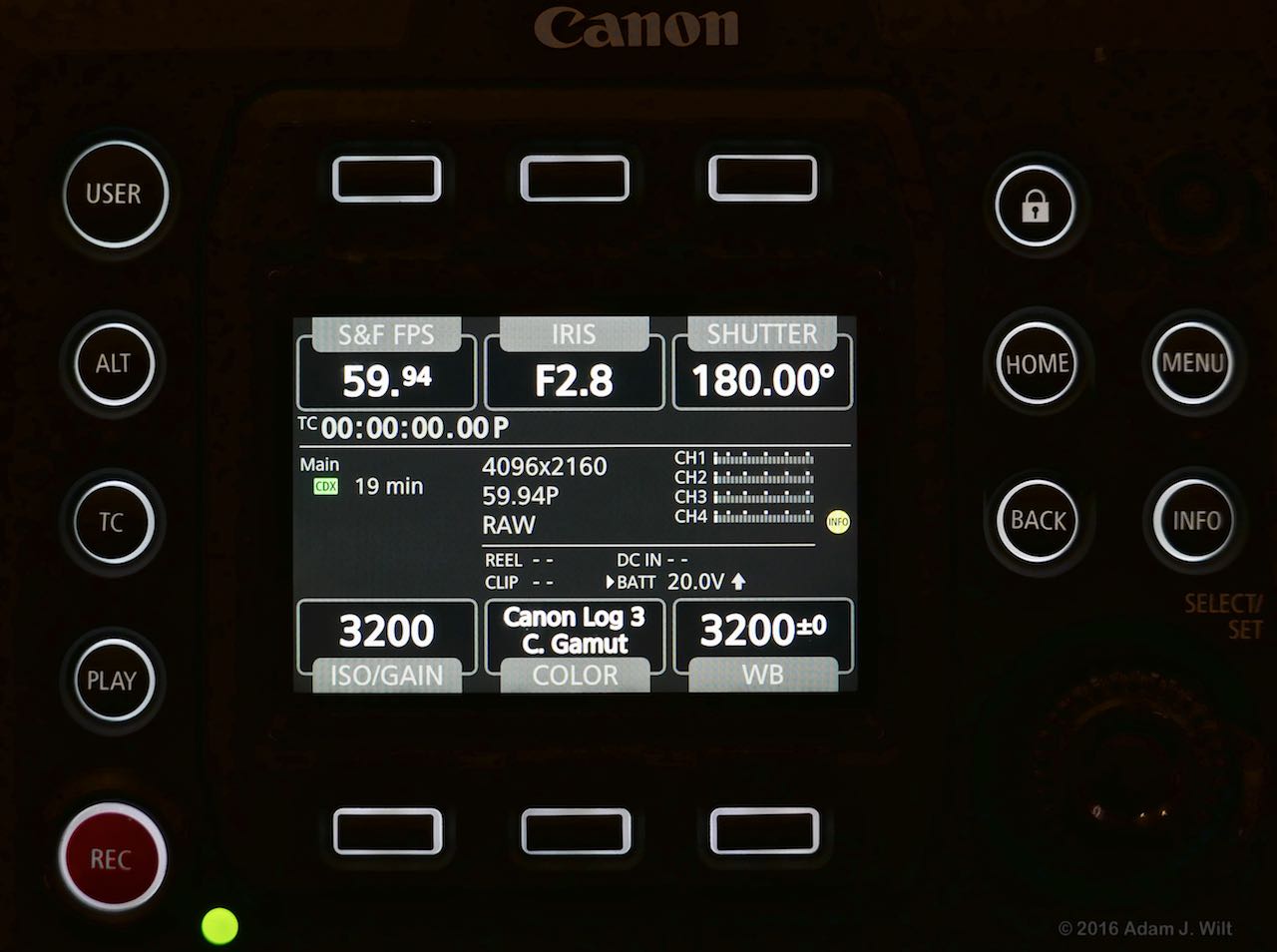 Here’s the control panel, exposed for the display. As on the Arri Alexa, the Sony F5 and F55, and Panasonic VariCams, six softkeys surround an information-rich display. This configuration seems to be the new standard for cinema cameras; despite the differences between ’em, they’re all quickly understood and easily navigated. 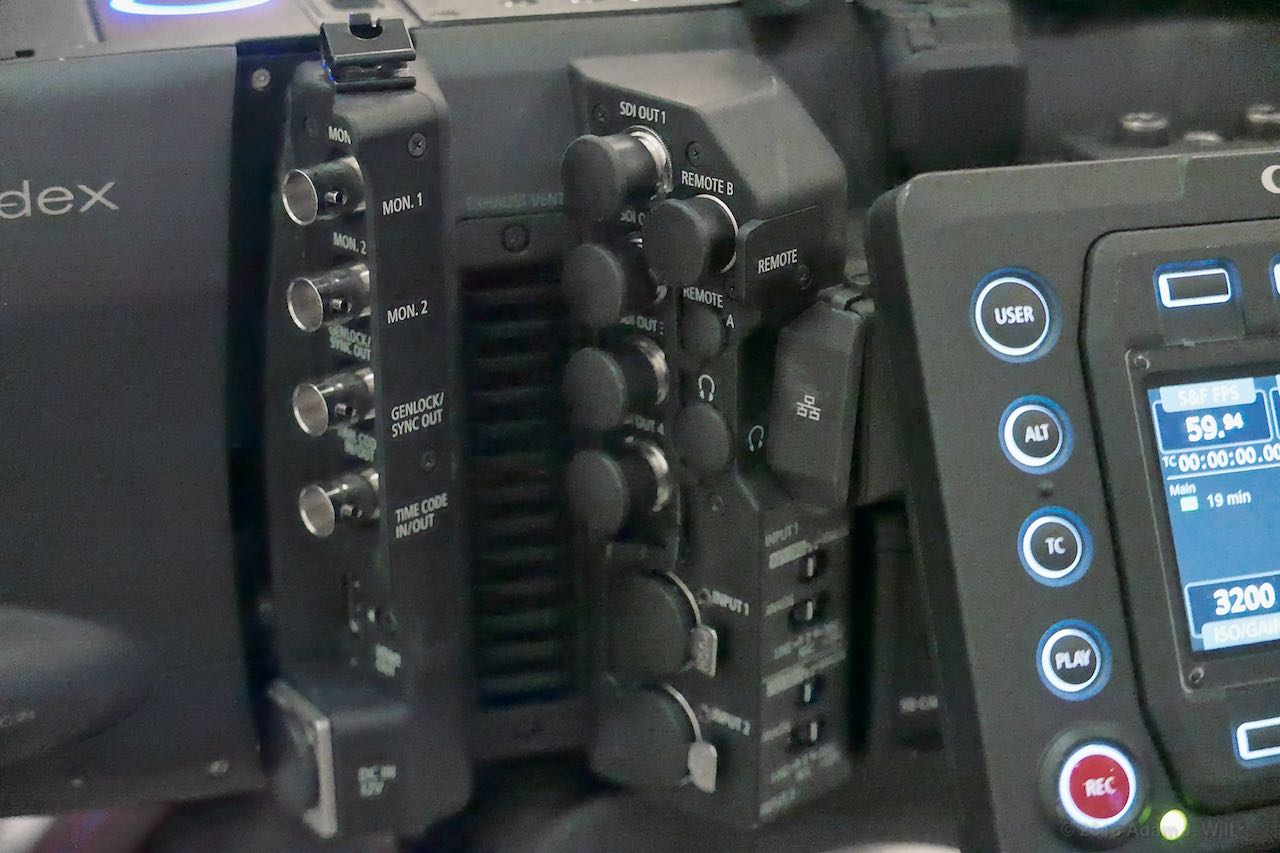 Two angled banks of connectors provide multiple 3G-SDI outputs (some dedicated to monitoring), timecode and genlock, DC power in and out, remotes, headphones, two XLRs for audio, and networking. Dual-link SDI can be used for 4K/ UHD outputs. There’s also an HDMI output below those four rearmost BNCs. 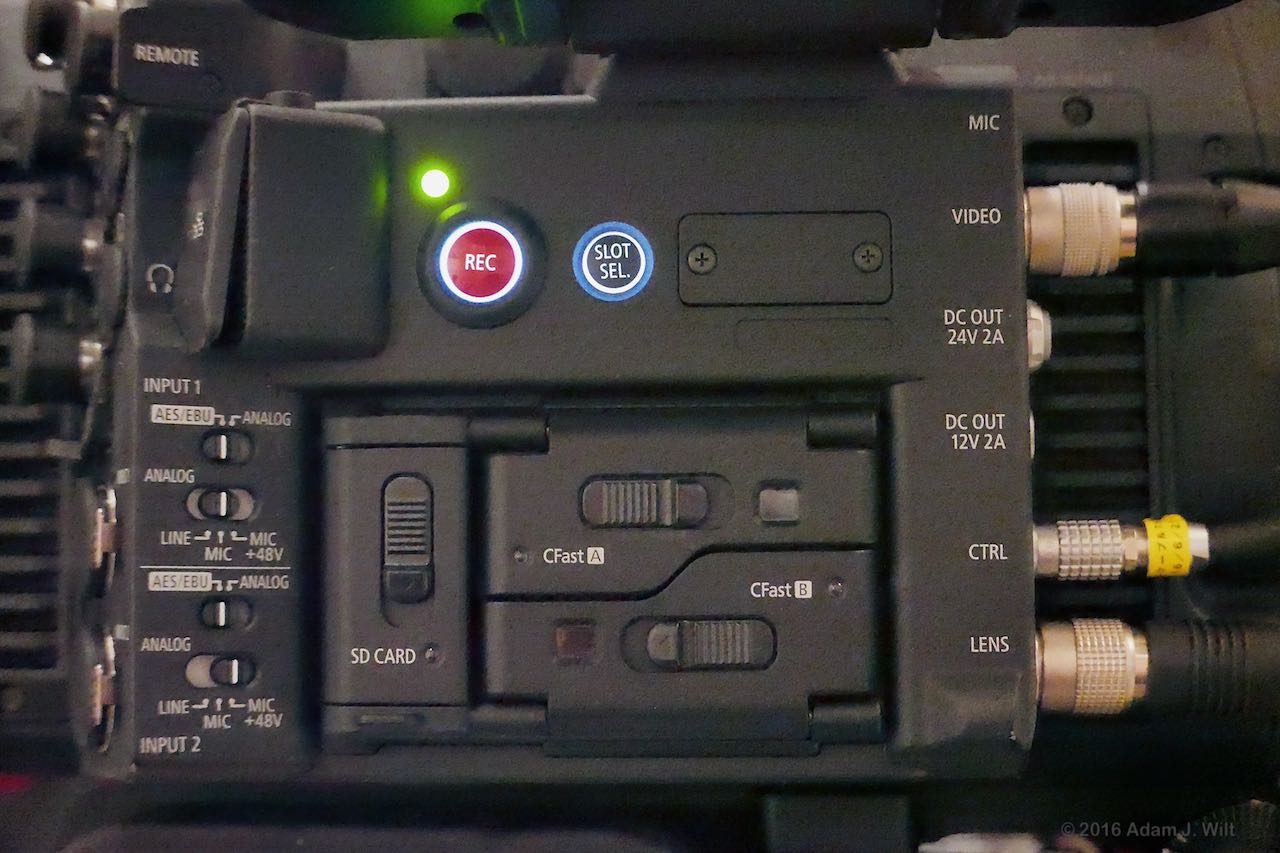 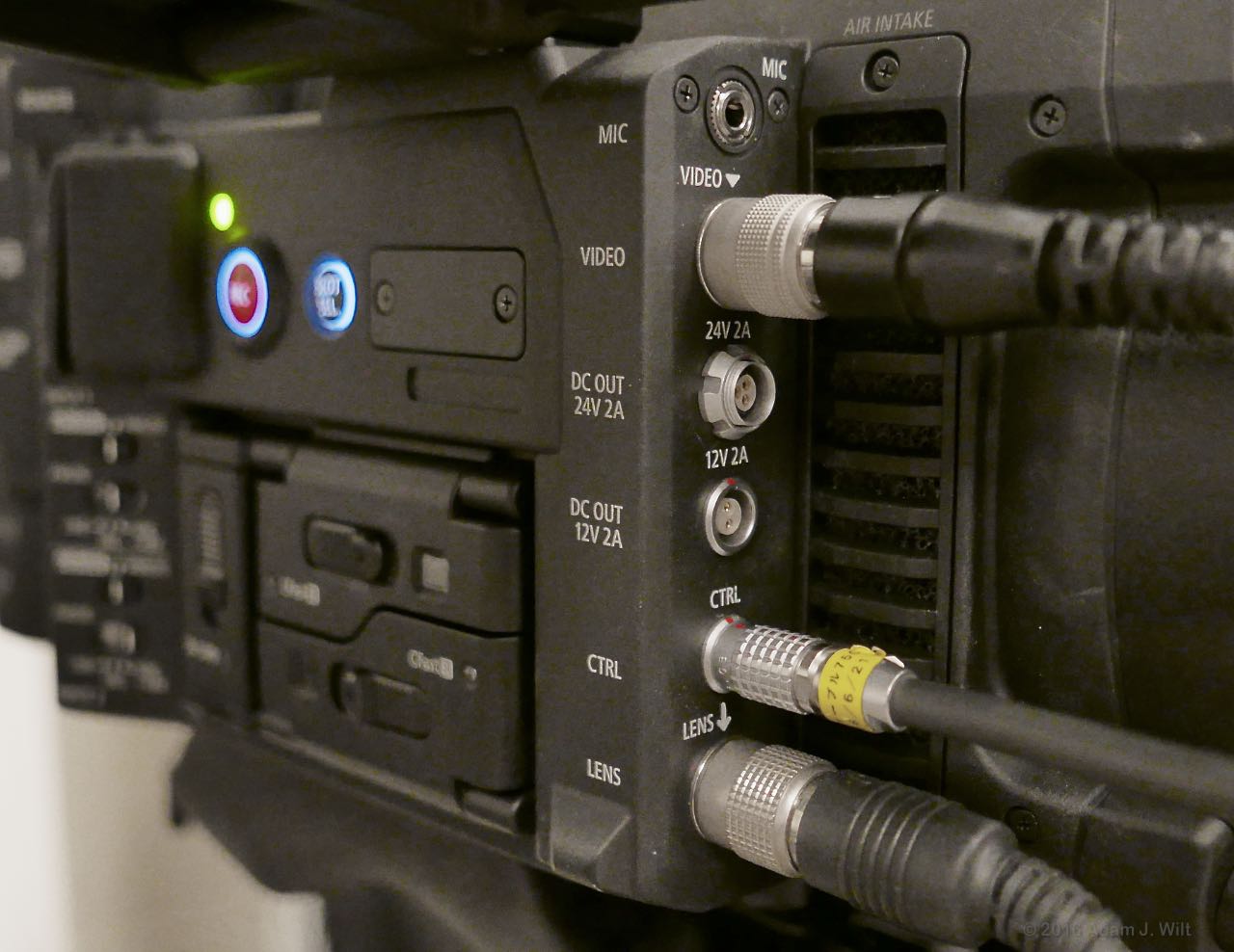 At the left front, there’s a miniplug mic input (!), a “Video” lemo for the EVF, 12v and 24v power taps, and Lemos for the control panel and the lens. 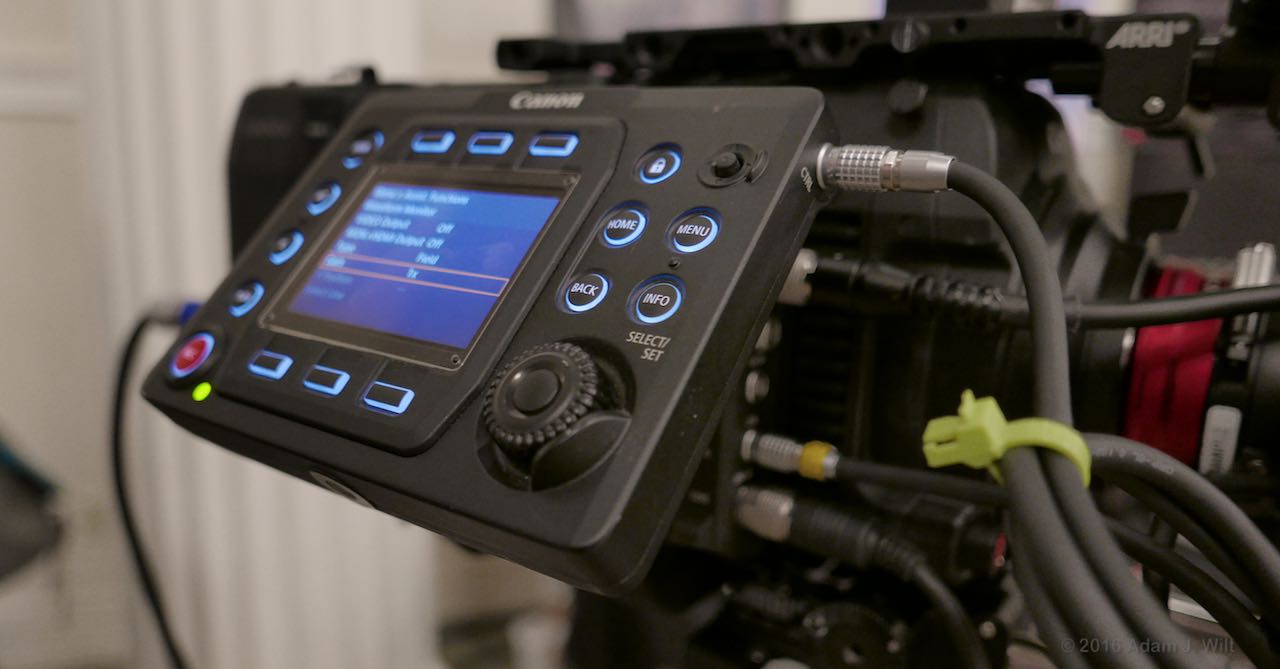 The control panel’s cable can be swapped out for others of varying lengths. If I remember correctly, there’s one that’s 20 feet long or more, so you can stick the camera on a jib and still control it from the ground. 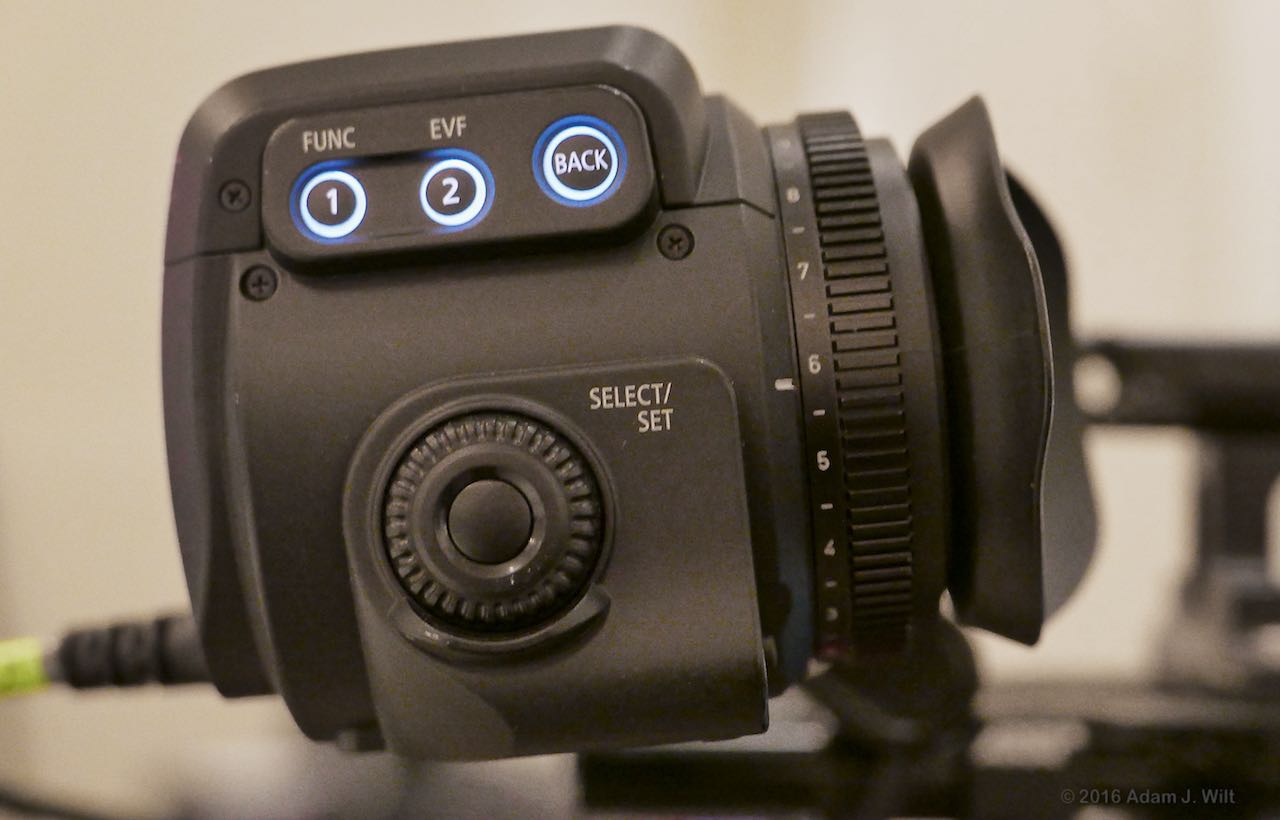 Here’s the right side of the compact OLED EVF, with two assignable buttons and a selection controller. 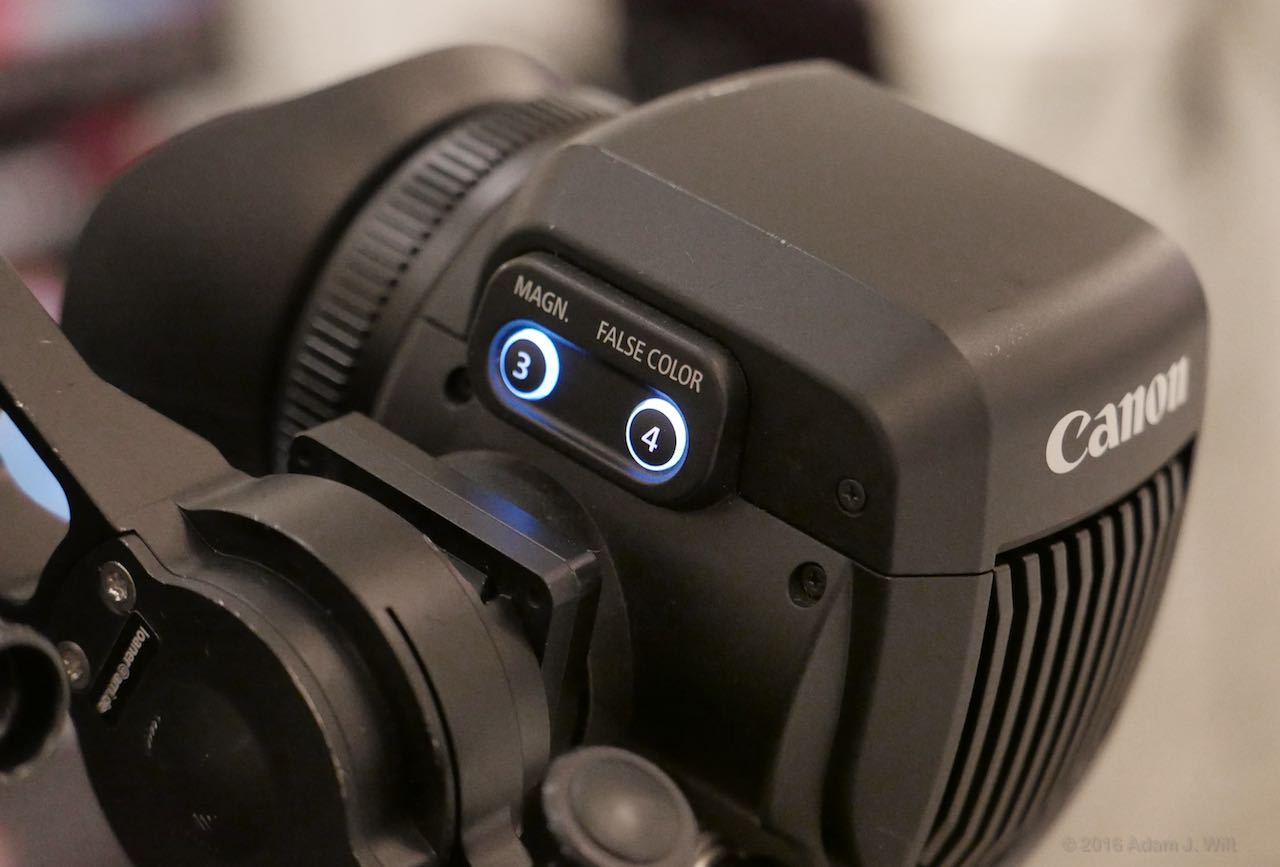 The right side of the EVF has two more buttons. 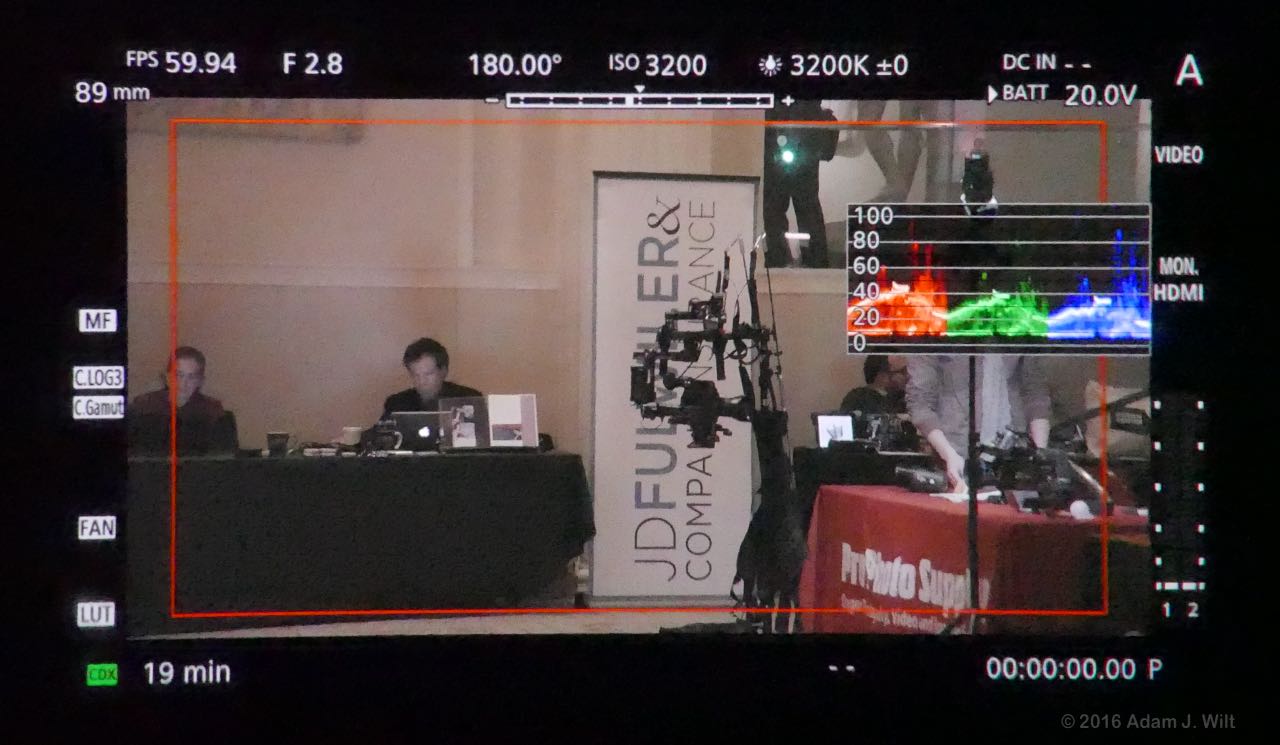 Here’s the view through the EVF: the red frame is the active picture, with ample lookaround outside it. The frame’s color can be changed, or the lookaround can be dimmed 25%, 50%, or 75%. Canon’s usual informative data readouts, including a sliding-bar exposure indicator, surround the view. Of course you can enable a WFM: I’m showing RGB, but you can also choose luma-only in both field and line modes (and you can select the line!), or YCbCr. 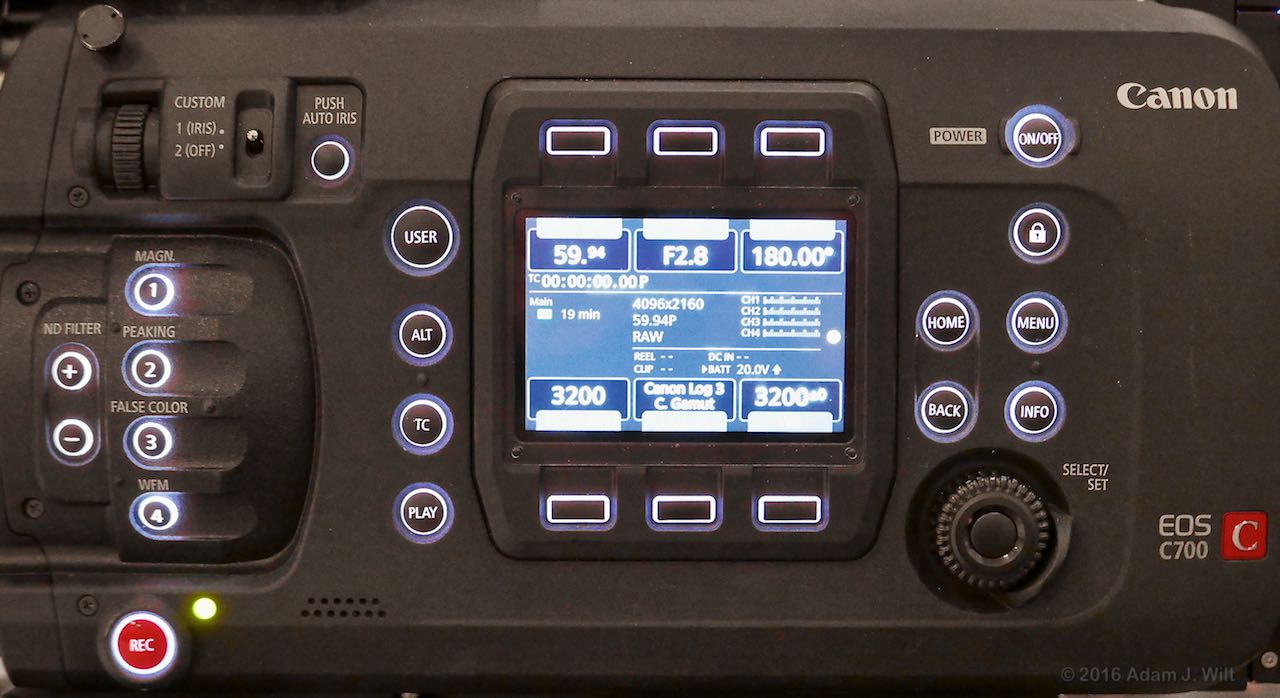 Close up on the left side. Up front on the rounded side panel there’s the ND filter selector, and more programmable buttons with very useful defaults. The operator’s-side control panel is built in and not removable.

If I had to guess, I’d venture that you can set position 2 on the front thumbwheel to control audio gain, but that’s only a guess. 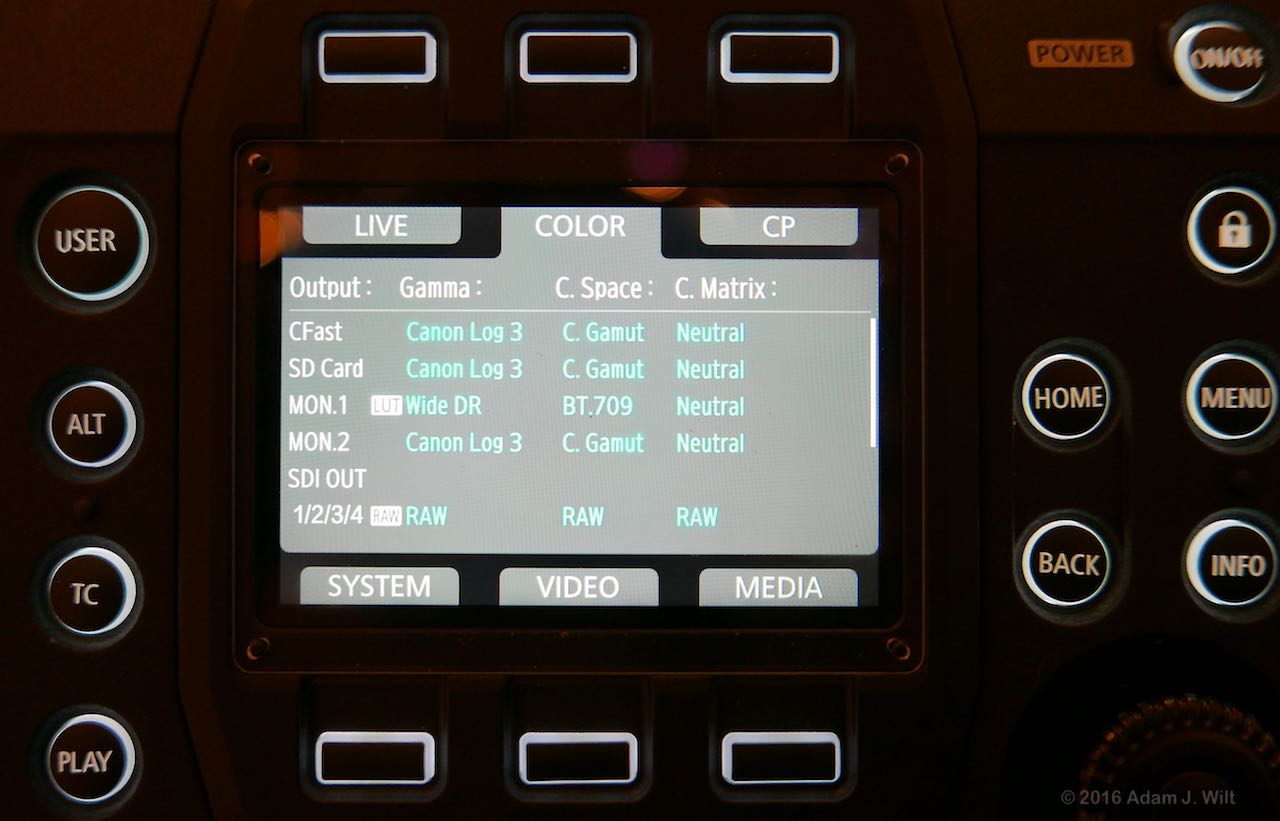 Pressing INFO and selecting the COLOR softkey give you an indication of the flexibility of the grading options for monitoring and recording. 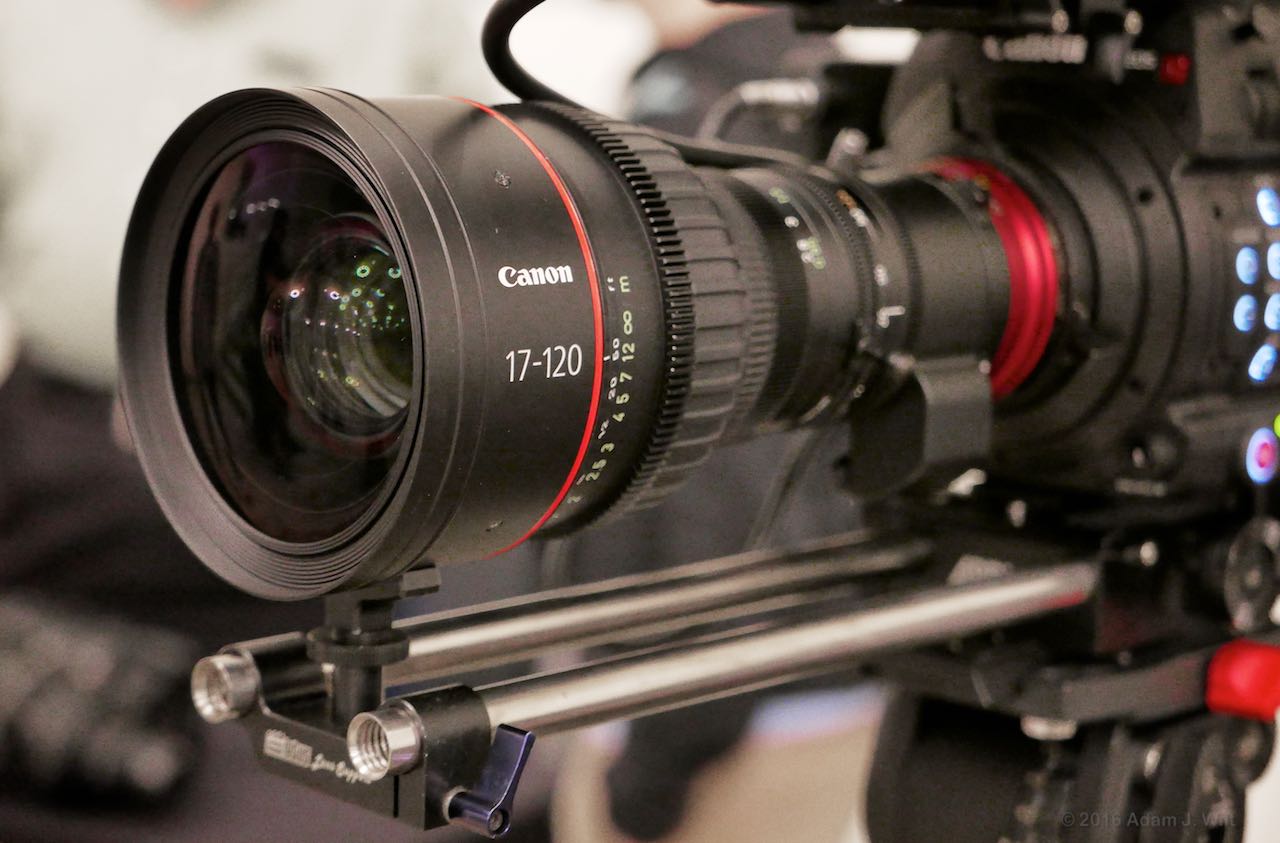 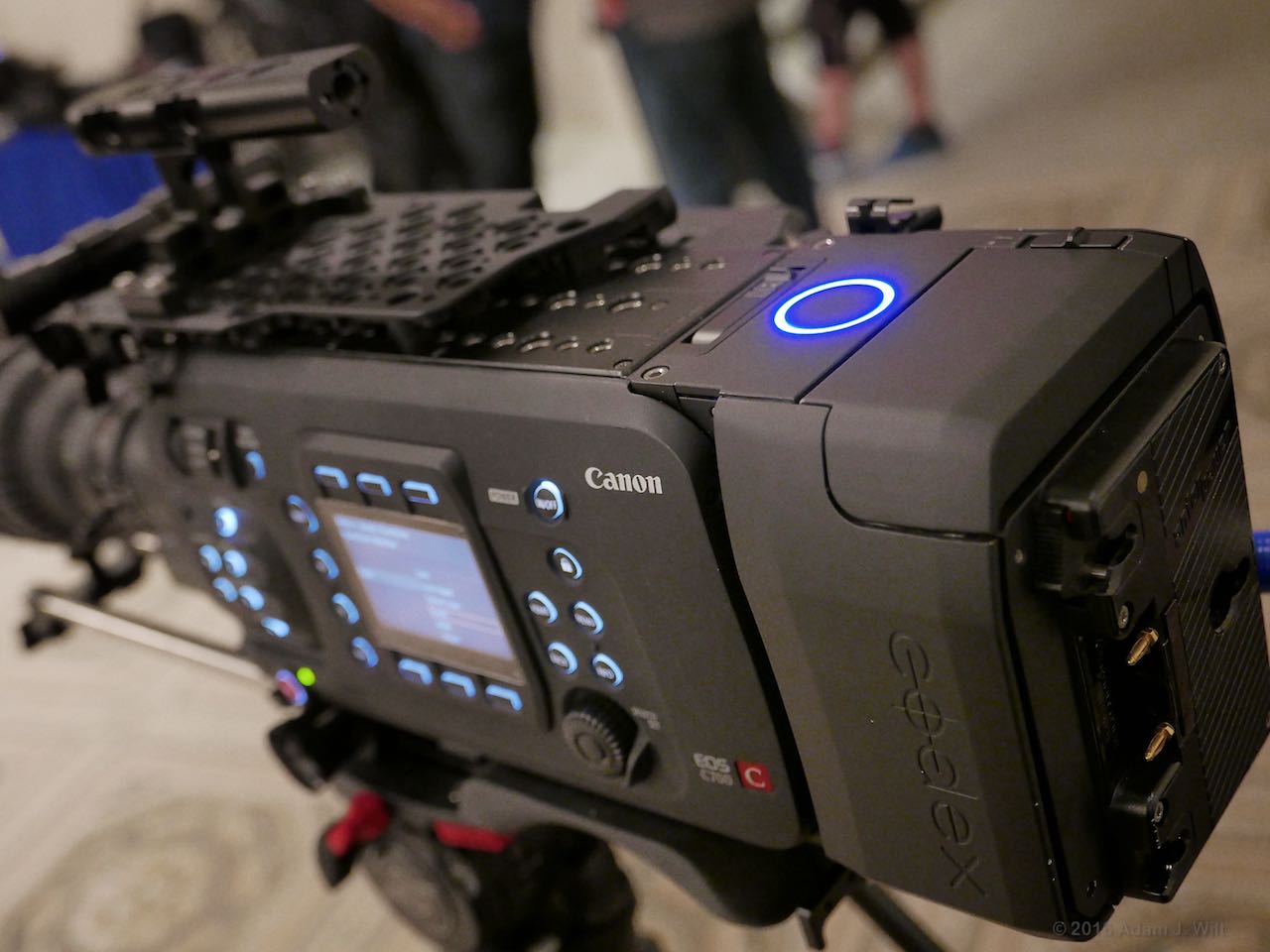 Another view of the Codex and its trademark blue ring.

Also observe that the camera’s entire top is a cheeseplate (it extends all the way to the front, under that Arri cheeseplate). FIZ radios? Monitors? Teradeks? Wireless audio receivers? Betcha run out of accessories before you run out of mounting holes to stick ’em in. 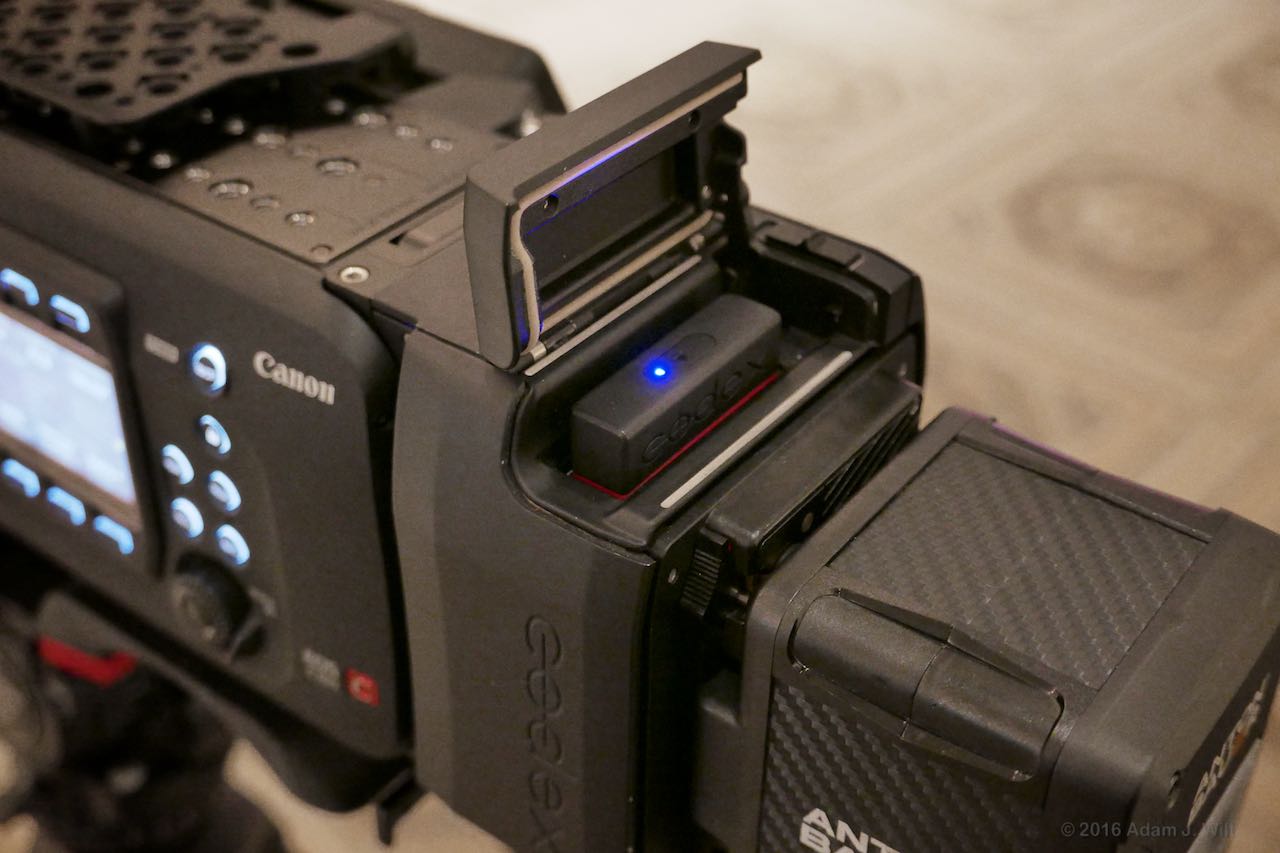 Flip open the lip on the Codex (it’s weather sealed, of course), and you can see the Codex Capture Drive therein.

The Canon folks say that Koerner Camera has expressed interest in getting a couple of these for their inventory, so we’ll have C700s to play with in the Pacific Northwest. This may be the first time we’ve seen this puppy ’round these parts, but it won’t be the last.

And now for something completely different: 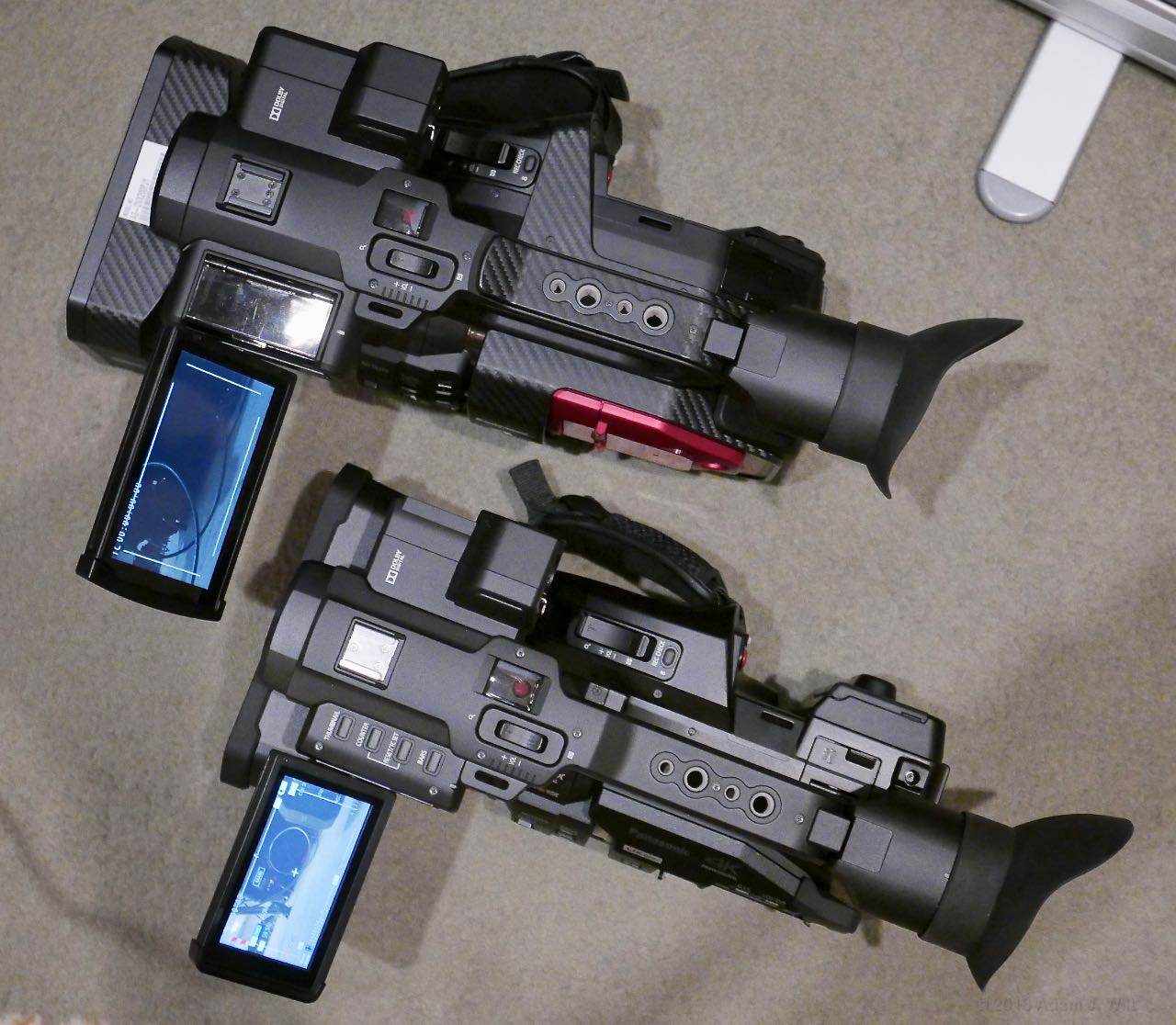 On the top, the Panasonic AG-DVX200. On the bottom, the new, not-yet-shipping UX180. The UX180 is a 4K/UHD camcorder with a 1″ sensor and a 20x zoom, compared to the DVX200’s 4/3″ chip and 13x zoom. The overall designs and controls are very similar, and the UX180 is slightly smaller and lighter—but more importantly, it’s much better balanced for handholding. I find the DVX200 to be so side-heavy it’s painful to use for more than a minute; the UX180 is substantially easier to hold single-handed.

So, UX180 for the win? Maybe. The DVX200 is somewhat fuller-featured, and only the DVX200 has V-Log. The UX180 will be a few hundred bucks cheaper than the DVx200, but it’s not a huge price difference. Choices, ever more choices…

Disclosure: I paid my ten bucks just like any other schlub to attend the NW Filmmaker’s Festival Summit. While speakers talked about diversity in filmmaking, and about getting more women into positions of power in the industry, and how to talk to music people about scoring your production, and played back commercial spots they’d done for clients, I ogled cameras. Sad!