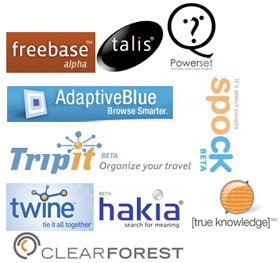 One of the highlights of October’s Web 2.0 Summit in San Francisco was the emergence of ‘Semantic Apps’ as a force. Note that we’re not necessarily talking about the Semantic Web, which is the Tim Berners-Lee W3C led initiative that touts technologies like RDF, OWL and other standards for metadata. Semantic Apps may use those technologies, but not necessarily. This was a point made by the founder of one of the Semantic Apps listed below, Danny Hillis of Freebase (who is as much a tech legend as Berners-Lee).The purpose of this post is to highlight 10 Semantic Apps. We’re not touting this as a ‘Top 10’, because there is no way to rank these apps at this point – many are still non-public apps, e.g. in private beta. It reflects the nascent status of this sector, even though people like Hillis and Spivack have been working on their apps for years now.

What is a Semantic App?

Firstly let’s define “Semantic App”. A key element is that the apps below all try to determine the meaning of text and other data, and then create connections for users. Another of the founders mentioned below, Nova Spivack of Twine, noted at the Summit that data portability and connectibility are keys to these new semantic apps – i.e. using the Web as platform.

In September Alex Iskold wrote a great primer on this topic, called Top-Down: A New Approach to the Semantic Web. In that post, Alex Iskold explained that there are two main approaches to Semantic Apps:

1) Bottom Up – involves embedding semantical annotations (meta-data) right into the data.
2) Top down – relies on analyzing existing information; the ultimate top-down solution would be a fully blown natural language processor, which is able to understand text like people do.