While affordable and simple to use, my syncing results weren’t very encouraging

I’ve made no secret of my love for PluralEyes, the auto-syncing tool that came to market a few years ago. It has saved me countless hours in the edit suite doing that most menial of tasks: syncing. A competitor popped up a while back (not counting Final Cut Pro X’s built-in option) called WooWave. It’s certainly a quirky name that fits this quirky tool. But the most important question is this: how well does WooWave sync? I put it through my usual battery of syncing tests to find out. The results weren’t so great.

WooWave’s personality is evident as soon as you launch the app. Click the help or license button and a big, yellow speech bubble responds. 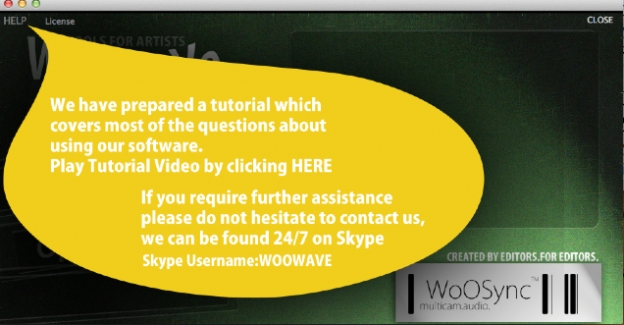 There aren’t a whole lot of options but click the Options buttons and you’re greeted with just a few settings and sync options. 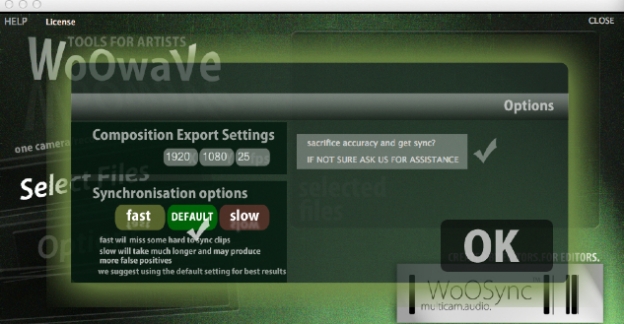 Normally misspellings in a software interface might be a bad sign but English isn’t the WooWave developer’s native language. The default frame rate of 25 is another sign WooWave doesn’t originate from an NTSC land.

And don’t try the menu as there’s nothing there. All your interaction with WooWave takes place right in the main window. But it’s very simple to use: click the Select Files button and a window prompts you to load your clips. 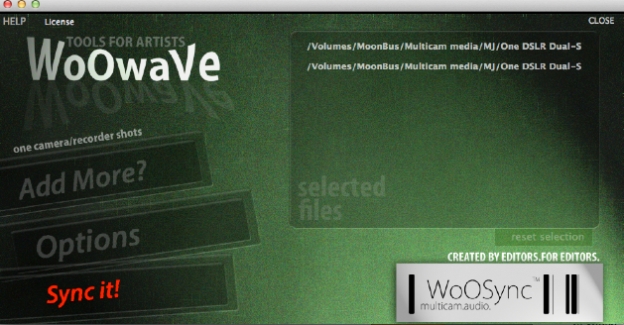 Once that is done it’s just a matter of hitting the Sync it! button to begin. A bit yellow progress bar shows you WooWave is working. 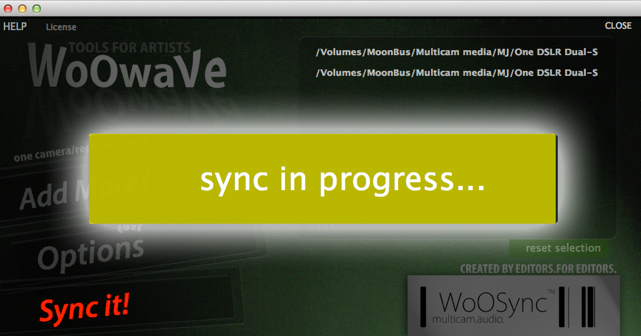 And when you’re done. 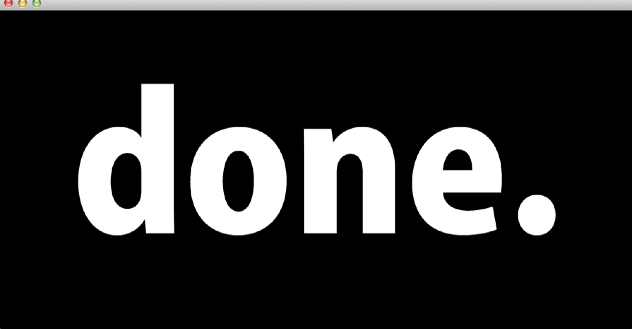 Once you get that message above check your desktop for a SYNCED folder. In there you’ll find a batch of XMLs ready to import into Adobe Premiere Pro or either of the Final Cut Pro’s. I'm not sure of the purpose of the UNSYNCED XMLs but my guess is that is to just get all the clips from the sync operation into the NLE.

What you won’t find is an AAF for import into Avid Media Composer.

When syncing is done, WooWave is ready to go again. 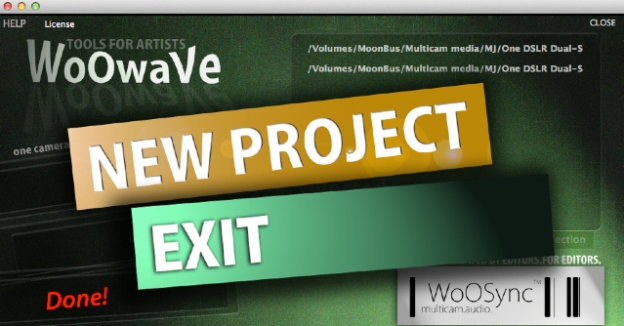 But just how fast (and accurate) is WooWave?

Of course the real question is just how fast and how accurate is any syncing tool like WooWave? Here’s my test results using the same multicam source files I’ve been using for quite a while now to test all things multicam.

3 seconds … but I got no resulting XML output files. Instead I got this text file that popped up:

That could be the result of only having one video angle though there is often the occasion to sync a single DSLR angle to good audio. But there is an option in the WooWave project pane to turn on one camera/recorder shots so I thought I’d try that. With that option I got this message:

No sure why it wouldn’t sync those items.

2 minutes 10 seconds … and a much better resulting note:

But once I imported the synced XML into Adobe Premiere Pro the sync wasn’t accurate.

WooWave was able to put the two video angles in sync but did not place the two 4 minute clips at the correct synced position in the 1 hour audio clip.

An even stranger thing happened when opening the resulting synced XML in Final Cut Pro X. WooWave was able to get the two cameras into sync but the long audio file just showed up in the timeline as a silent clip with no audio. 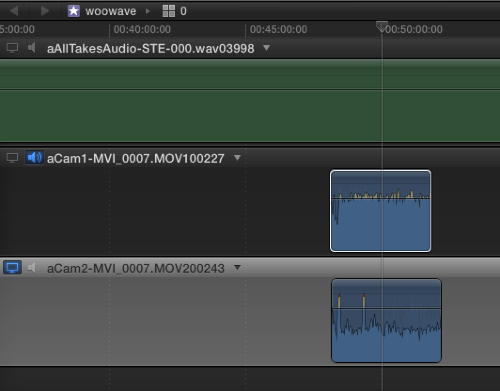 Even stranger than that is if you look at the file names in the FCPX multicam clip they have the letter a added onto the front and a suffix at the end. Compare those clips in the FCPX timeline above with the names of source the clips in the Finder:

I’m not sure what is up with that.

I thought I might have gotten a setting wrong so I tried it again tweaking the settings and got this message: 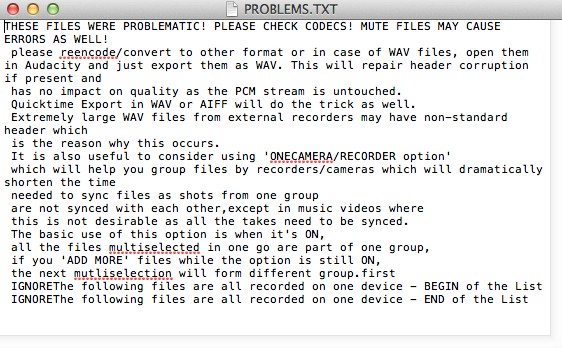 It’s nice to provide some details on what might have gone wrong in the sync but these are some relatively simple files so I’m not sure why I got these errors.

So let's try a few other files

While it’s certainly common to have DSLR media to sync with an audio only clip recorded as the main audio source, I thought that maybe the audio only clips were throwing WooWave off.

With this test WooWave was able to get a couple of the angles in sync in Adobe Premiere Pro. But in FCPX there was a similar problem as that above in that two of the synced angles didn’t include audio. 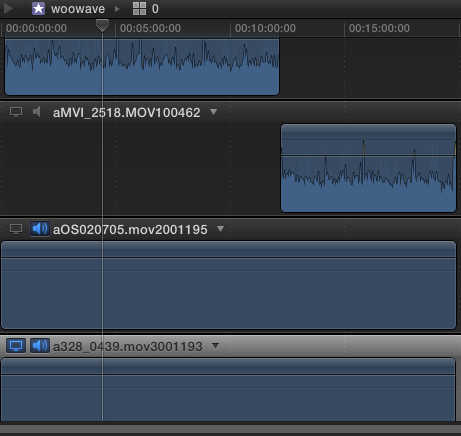 But those angles did sync with the one camera that did come in with audio.

At this point I thought I would toss back to what should be a super simple sync. I tried two 11 minute DSLR talking-head angles with decent scratch audio. WooWave took 45 seconds to analyze but then I got this message:

That was very surprising. These were ProRes Proxy clips so I wonder if that was the issue? I tried again as the message suggested and used the “Slow” setting. That also took 45 seconds but I got the same error with no results.

Thinking it might have been the ProRes Proxy codec causing issues I tried four 3 minute clips from a music video shoot that were straight up ProRes. That one gave me a “SUCCESS!” message.

At that point I abandoned the test.

I’m not sure why I had such disappointing results with WooWave. It could be the formats I was trying to sync. It could be I didn’t have a good understanding of what some of the different settings mean and what they do. Both the WooWave interface and the website offer online Skype help and certainly encourage you to use it but admittedly I didn’t dig deep into support to try and figure out the problems. Software like this should be simple in setup and operation so trying to understand just what some of the error messages meant and what I needed to do to get the sync to work wasn’t something I had the time to do. I think some of the ease of understand of both the error messages and the interface options are lost in the translation to English. Maybe the developer can clarify things in a future update. There is some footage out on the internet from the WooWave developer that he encourages people to use for testing. I download that footage and tried to sync it but only had mixed results.

I emailed the developer of WooWave and got a quick response. One comment from the develop worth noting was this: “What I do for some clients is I modify the algorithm to suit their needs. Not all audio is the same and some spectral representations are very different usually caused by compression artefacts. It is still a matter for further research, and I am actively thinking of ways to weed out false positives(and solve negative results).” It sounds like he is open to working with users on improving the application. That is a plus of working with small developers as there is often an open path of communication between the developer and the user to sort out problems and work in new features. The downside can be it might take some time to work up a new version if the developer is working alone. I got the feeling that the developer, Igor, is doing the development himself.

Overall you can see my success with WooWave wasn’t very, well, successful. I was surprised it didn’t work better as I threw some relatively simple syncing stuff at it. I was using the latest version of the application running on Mac OSX 10.8.2. The obvious comparison to make is to compare WooWave to PluralEyes and that’s a comparison that is made on the WooWave website. To me there’s not much of a comparison as PluralEyes works very well and has synced (or is that has sunk) some amazing stuff in the past, including all of the things I did in this test. WooWave is cheaper at $99 (though you might be able to get a version for free) and has a Windows version as well. I like the fact that there is an alternative options besides PluralEyes for syncing as the post-production world needs choices. And with PluralEyes 3 the new interface, while amazingly powerful, is complex so the simplicity of WooWave has a place in the world. I’ll still choose PluralEyes 3 for my syncing operations as my experience with WooWave didn’t produce great results.

I’m very curious as to other’s experiences with WooWave so if you’ve used the product please post in the comments below and tell us how your experience went.