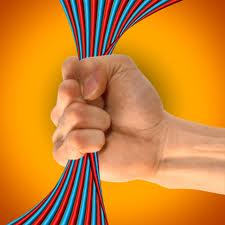 Right now. YouTube takes up 8 percent of prime time Internet traffic with 24 hours of video is uploaded every minute.

But that’s not the big problem in the USA. No,the real problem lies here:

Netflix represents more than 20% of downstream Internet traffic during peak times in the U.S. — and is heaviest in the primetime hours of 8 to 10 p.m., according to a new report from bandwidth management equipment vendor Sandvine. As much as 43 percent of peak Internet traffic is eaten up by real time entertainment, mostly streaming video. As that grows rapidly, it imperils the ability to pipe entertainment to neighborhoods.

Is the stage for being set for ISP’s to push back? With video streaming via the Internet pipes increasing dominance in bandwidth consumption, the Internet service providers might push back on at some point. The streaming video using the Internet Protocol (IP) business model into homes, relies on — essentailly — poaching bandwidth. And the Net Neutrality issue will simply exacerbate the situation. If you back net neutrality, it’s a lose-lose situation. If ISP’s are forced to grant Netflix free reign, the response will simply be to raise the price on your Internet service. That is, if they can’t “tax” the outsized impack back to Netflix, they’ll bill you for it whether you use it or not. Be careful what you wish for as you just might get it.

But it’s not just Netflix. It’s all the new connected devices coming off the shelves this holiday season. From Connected TV’s to Tablets to more Smartphones to your Xbox, Your PS3, your Wii, your Roku, your Boxee box, your Set Top Box… all which are capable of streaming video from the Internet, all which are capable of streaming Video on Demand. Now consider what might occur in January… when the massive gadget-giving season is over — when it’s all unwrapped and plugged in, and — perhaps 20 percent of the population start streaming video off the Internet.