Jerome Sabourin is an award-winning cinematographer and colorist based in Montreal. He uses Adobe SpeedGrade on all his projects, including TV shows and a feature films. In this piece, Jerome writes about his path from cinematography into color, and shares with us what he loves about SpeedGrade.

It’s funny how I became a cinematographer. I had worked on sets since I was 18 as a PA and I was always slightly intimidated and a little irritated by the DPs. They seemed to be so confident and in control – but sometimes I had the feeling that they were a little too sure of themselves. So when I went to university and started making student films, I always chose the role of DP: I didn’t want to work for one!

Today, after twenty years of doing that job, I’m still learning. And, to be honest, I am still intimidated by this work. I love my work so much because I feel challenged every day.

My minor was in sculpture and for me, being a DP is similar to that art – you are playing with perspective, light, shadows and gesture. It’s about giving an angle and consistency to the story and the actors in it. As a filmmaker, I still approach my work like a sculptor or an architect.

When I started out, I had no plans to become a colorist. But now I grade my own shows because the pre-grade and the final grade are so interlinked with the way I shoot. The thing I love most about SpeedGrade, is how fast it lets me work. I can finish a show in two days. 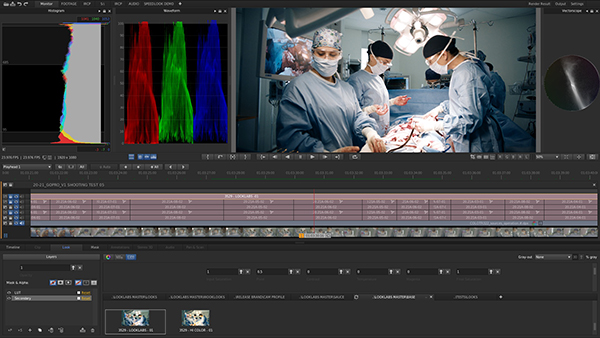 “Trauma” is a TV series I shot and graded. This image shows my grading setup for the show in Adobe SpeedGrade CS6

How I got into color grading
About ten years ago I was first introduced to the concept of using LUTs to simulate film stock. It was a revelation to me. I knew it couldn’t solve all of the problems of video. For instance, it wouldn’t give me a softer roll-off to white, nor could it give me the latitude of film. But I was sure I could use this technology to give my shots a unique character, a look and feel like film has, but that digital had lacked for me. I even experimented with compositing software to add grain and better highlight curves to NTSC video footage.

In searching for tools to do this, I became one of the very first SpeedGrade users in 2003. SpeedGrade didn’t just give me tools for color management and grading, it gave me a creative tool to express the personality in my images.

After that, all my cinematographic decisions were influenced by the creative looks I was producing with SpeedGrade during my prep. As my cinematic looks became more and more complex, I felt frustrated by the fact that they had to be manually reproduced by someone else in post-production, sometimes with results that weren’t close enough to my original intention. In 2004 we began work on Le n©gociateur (The Negotiator), a crime drama set in 1970s Montreal and I persuaded the producer to take the color grading to the only house in Montreal that had a SpeedGrade DI suite.

Two years after that, on a new series about a boxer – Le 7e Round (The Seventh Round), – we did the look design as part of our preproduction. We created eight basic looks – the approach worked like a charm and made our production work much more efficient. The Sony F900r cameras we used recorded clean, with a modified gamma, but we reviewed our shots on a Cine-Tal Cinemage with the looks applied, so we knew that the final product was going to be what we wanted. We used these .Look files for our dailies, and used them again for the final grading sessions back in SpeedGrade.

The producers were so happy with the final result that three new projects we had lined up following this show were done with the same pipeline. I have been using SpeedGrade on all my productions ever since. 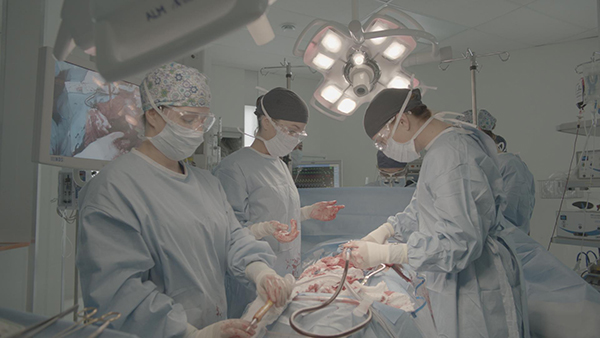 The shot is clean with good lighting, but the image if flat and has no character. 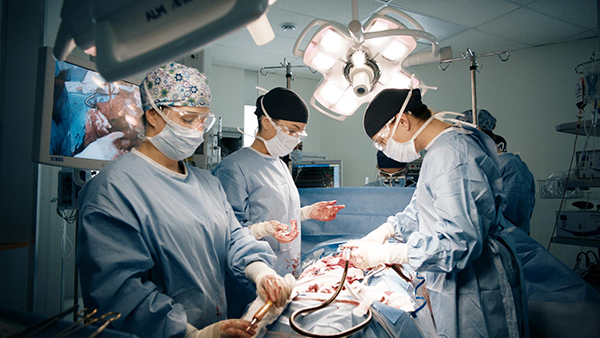 Here is the same image with my look applied. Now it has depth, contour and drama.

SpeedGrade CS6
Adobe SpeedGrade is a really nice evolution of the old SpeedGrade. The color science in SpeedGrade CS6 is excellent and has given me a new level of creative freedom in designing looks.

I come from a production point of view and I like that this software is very pragmatic and efficient. SpeedGrade gives you an open structure that allows you to set up your own workflow. I find this very different from the other grading applications, because they always seem to force you to work in a certain way. SpeedGrade is so versatile that it becomes your own tool. That’s very attractive to a DP.

Color grading has really expanded my experience as a cinematographer and I would encourage other filmmakers to explore this new world. SpeedGrade is a great tool for that!

Jerome Sabourin, CSC is a director of photography based in Montreal. He was DP on numerous acclaimed and award-winning television dramas and feature films, garnering G©meaux awards for cinematography on Le n©gociateur (2005) and Minuit, le soir (2005). He is currently in pre-production on a new feature film, Amsterdam, slated for release in 2013.

Adobe SpeedGrade CS6 is a professional color grading software. It is available as a stand-alone application, or as part of Adobe Creative Suite 6 and Adobe Creative Cloud Membership