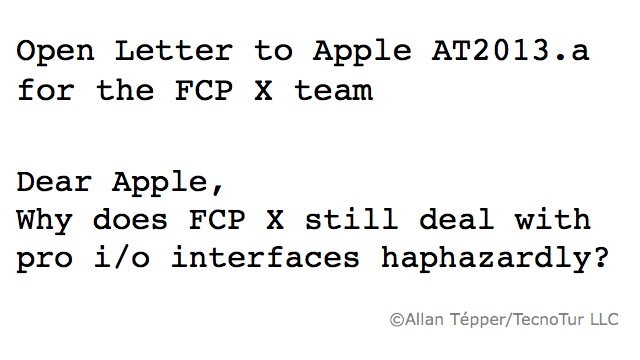 Since Apple released Final Cut Pro X in June 2011, there have been seven updates and many valuable features have been added. Although FCP X fortunately achieved partial compatibility with professional audio/video interfaces as of version 10.0.4, we are now at version 10.0.7 and it still handles those devices haphazardly. I am not talking about capturing from videotape, nor am I talking about printing to tape. Both of those can be done externally if required. I am talking about something much more fundamental: controlling the spatial resolution and framerate of a hardware-based professional audio/video interface for monitoring purposes, like those sold by companies like AJA, Blackmagic, Matrox, and MOTU.

With other professional video editing software, including Adobe Premiere Pro, Avid Media Composer, and even Final Cut Pro versions 6 and 7 (and perhaps further back, but I only remember back as far as 6), critical settings for the professional audio/video input/output devices were accessible on a sequence-by-sequence basis, as they should be. So with those programs, just as you would set a particular project/sequence to be with a particular spatial resolution (i.e. 1280×720 or 1920×1080) and a particular framerate (i.e. 23.976p, 24.000p, 25p, 29.97p, etc.). So if you had one project/sequence at 1080p25 and another at 720p59.94, not only the editing parameters were saved, but also the appropriate settings for the professional i/o interface. That way, if the human editor needs to alternate between projects or sequences, the i/o’s hardware automatically stays in sync as the human editor goes back and forth between projects/sequences.

As of FCP X 10.0.7, these settings are only accessible in a control panel which is supplied by the pro i/o interface’s manufacturer. There is no control from FCP X to change spatial resolution or framerate of the connected professional i/o device. Instead, within FCP X you only select which i/o interface you’re going to use (presumably in case you had more than one, or to deactivate the use of any) in FCP X’s Preferences>Playback>A/V Output: and then you go and activate external monitoring in FCP X’s Windows>AV Output menu. So if you have to alternate between different spatial resolutions and/or framerates in different projects (as in the example shown in the prior section), you must quit FCP X, make the appropriate change in the external control panel, and then re-launch FCP X. If you forget to do so, in the best case, you’ll realize it because you won’t see proper moving video on your monitor… and in the worst case, you’ll see processed video, which (when the i/o interface supports it) can often be unnecessarily scaled spatially, and/or framerate converted, let alone the delay that this processing often introduces. Even if you remember to change it manually in the external control panel, it is stressful to have to do this continually and is subject to human error each time it is done.

The way it should be in FCP X

Apple should re-establish the capability in FCP that allows controlling these two critical settings (spatial resolution and framerate for professional i/o interfaces) and save them together with the project. Other critical settings which don’t change from project to project —but are specific for a particular monitor— should only be in the i/o’s control panel. In fact, that’s where AJA and Matrox allow for forcing RGB/4:4:4 output for a monitor like the HP DreamColor (and where I hope Blackmagic will eventually, via a software/firmware update), and where in some cases we can set between PsF output and native pure progressive output (as well as forced pure progressive, in the case of an interlaced project used with a DreamColor monitor). There is no reason for that type of adjustment to be in FCP X, since it is more about the monitor than about the project.

In order to work properly within a workflow, the numbers must interchange properly. For example, when I mention that when shooting at 59.94p and then conforming the playback to 23.976p in post, we get natural 2.5 x slow motion, the numbers work. Go ahead: Divide 59.94 by 2.5 and you’ll get exactly 23.976, not 23.98. Of course, I know that even numbers like 23.976, 29.97, and 59.94 are not exact and are in themselves rounded versions of much longer numbers, but they are close enough to work properly within a workflow. That’s why Apple should consistently adopt 23.976 nomenclature instead of 23.98 nomenclature in all menus and Inspectors that make reference to this framerate. This applies to FCP X, QuickTime Player, OS X’s Display Control Panel (once Apple begins supporting 23.976 there), and iMovie. Yes, even iMovie should now distinguish between 23.976p (which is recorded by virtually any camera under US$10,000) and exact 24p, which is recorded by the GoPro camera after a recent firmware update, and optionally by the Blackmagic Cinema Camera.

Please see my other Open Letter to Apple