Philips ramps it up a notch but is it marketing more than good tech? 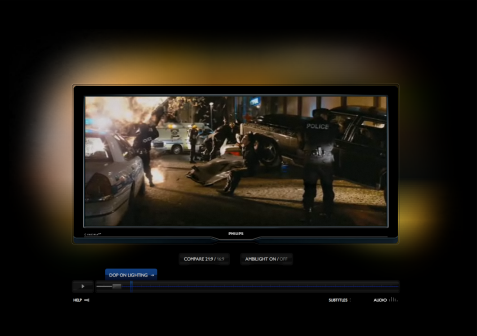 Yesterday my PVC colleague Mark Christiansen posted this quick-link to to an utterly amazing promotional piece / short film from Philips touting their upcoming 21:9 television. It’s a fantastic piece of work with the camera drifting slowly through a crime scene in a bullet-time sort of way. Throughout the piece a number of the filmmakers step into the scene to explain various parts of their art and craft.

Go and watch the piece and check out this new television and then come back for discussion. I call marketing bullshit on this TV.

Yep, that’s right. They said that the tv is a 21:9 tv. The whole world is producing 16:9 tvs right now but if you notice you still see the letterbox bars on the screen during some movies. That’s because movies can be shot at different aspect ratios so they aren’t always 16:9. I guess if all you watch are DVDs then maybe a 21:9 tv makes sense but since there is still a lot of regular television watched on HDTVs I would bet there will be a lot of regular tv watched on this thing too. It does have a built-in tuner. It seems to be that 99% of people that have 16:9 televisions today will watch 4:3 programming stretched to fill the screen. It stands to reason that this would be worse on a 21:9 television. But Phillips says no:

You needn’t worry, advanced formatting technology simply, and almost imperceptibly, fits them to the screen. The image is constantly analyzed and the edges of the picture are progressively stretched to the 21:9 format. All you’ll see is a flawless image filling every pixel in front of you.

Of course we know you can’t really fit 4:3 to any wide screen without either distorting the picture in some way or scaling the image up to fit, which might mean losing some quality. A common practice now is to just scale the sides of the image while leaving the middle distortion free. Call it flexview, panorama or whatever it can be very obvious when there is a text crawl across the screen. Andy Mees calls it Elastic Aspect and has a plug-in for Final Cut Pro to achieve the effect. But with a 21:9 tv it must have to stretch it even more. Philips website says no:

Okay, but just look at the image they supply on the website:

Are you kidding me? There’s LOTS of distortion in that picture. It’s also clearly visible in the 16:9 to 21:9 image on their webpage as well.

It seems that these tv manufactures are tying more and more to fool the public into believing they have better television technology than everyone else. Philips has used this Ambilight tech for a while that “launches the movie out of the TV onto the wall behind it, enlarging the screen with an ever-changing burst of color” by projecting light onto the wall behind your screen. This has been used in color grading suite for years as a subtle light behind the monitor on a neutral gray wall (I don’t know the exact spces for the light color temperature and wall colors) helps with color perception and viewing while grading an image but Philip’s Ambilight takes it to the extreme with light that changes color with the scene. You can turn it off but I be most people who have these tvs never turn it off. I’ve watched movies on several of these things and it is way more annoying that helpful, IMHO. They even seem to have a model that actually changes the color of the frame surrounding the screen: 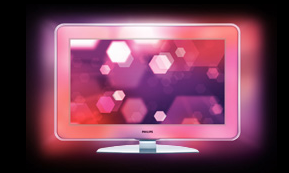 Where will the madness end? Certainly not with “Perfect Natural Motion” from Philips which overcomes “these traditional film shortcomings” of shooting at 24 frames per second. You have to click over to Features page of the Philips and watch the Perfect Natural Motion video as they explain how they “solve the annoying judder” of watch 24fps movies on their television: 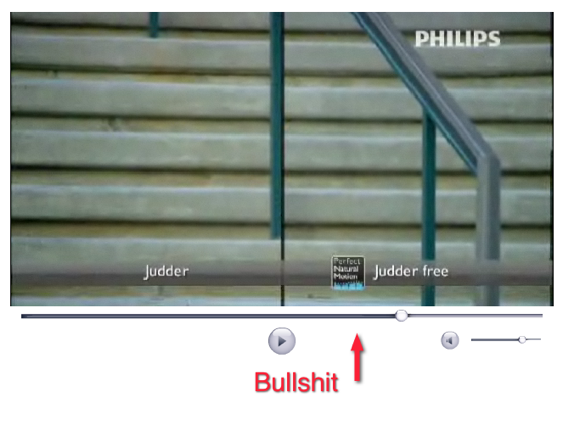 It’s sad that most tv manufactures are adding this technology, also known as 120Hz refresh rate, as it doesn’t feel right when watching a movie. The motion feels very much like pan-and-scan motion when watching pan-and-scan treatments on a 4:3 tv. This 120Hz debate may just be an old school vs. new school debate but you can’t debate how it makes the motion feel when watching narrative movies on one of these tvs. Combine that with things like the distortion you get when scaling 4:3 to 16:9 (or 21:9) and the ambilight glowing behind your screen and it really changes the viewing experience of a feature film. While it’s hard to get the proper viewing experience at home anyway, IMHO these type of “advancements” are more just marketing and take the viewer further and further from what the filmmakers intended when they created the work. I wish the Spielbergs and Bays of the world would try to educate the general public a bit on this. Of course most people probably don’t care. They just don’t want “those black bars on the top and bottom of the screen.”