Movies are dead.  TV as we know it is dead.  Print is dead.  Or at least that’s what everyone in entertainment seems to think.  But we know the truth, right?  None of these media are truly dead.   They’re simply evolving yet again.  Back when VHS tapes went the way of the dodo, surely someone said home entertainment was finished, but it only improved with DVDs.  Over the course of the next few months, we’ll talk about how the advent of what we’re calling “Connected Experiences” is another evolution of entertainment. 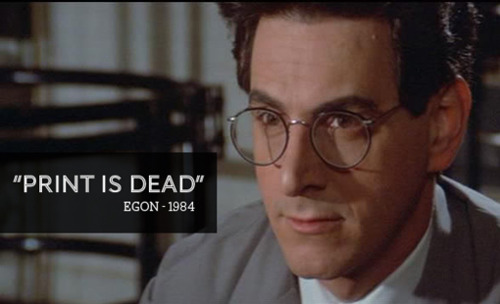 In the last decade, multi-platform storytelling has become more and more prevalent even though the likes of Mickey and Yoda have been practicing it for decades (though those are arguably franchises). This was made possible by the  Internet, which brought people together. Then, came mobile devices allowing the story to follow you everywhere. Now, you can interact with the story and your friends, instantaneously through social media.  But as access increased so did the choices, fragmenting audiences into the highly specific niches of personal interest.

Marketers reveled at this (after their initial panic), and a few smart people came up with the concept of the Alternate Reality Game.  Why not take full advantage of ravenous fans in that coveted 18 to 34 demographic that notoriously hate advertising but were willing to do anything to get more about the thing they loved.  The best of their kind were groundbreaking and amazingly creative endeavors.  But only a few IPs out there were big enough to warrant a multi-million dollar experience that often touched small numbers of people in isolated timeframes.  Sure, hardcore evangelists are crucial to a brand’s longevity but a funny Super Bowl spot will reach 100x the audience for the same cost. Even people who hate advertising watch Super Bowl ads.

Then, more smart people started bringing their favorite characters to life in such places as Twitter and Facebook.  And after that initial panic, media outlets jumped on board and hired their best, bright-eyed interns to tweet like Don Draper (after fans took it upon themselves to tweet like him first).  But then, that may not gel with the network’s ad campaign or the actor’s Conan interview.

Meanwhile, millions of videos were uploaded to YouTube and audiences started ditching their cable box for a Netflix account and once again, there was panic.

We think it’s about connecting all the media together by story.  It’s not a new idea but one that’s been misused by siloed decision-makers who mostly care about selling a product.  We’re ok with selling products too, we’ll just do it with a little flair and a cohesive plotline across every touch point.

In the coming weeks, we’ll talk about how to concept and execute Connected Experiences: the writing, the experience design, the production, and the learnings.   Join us, comment, or go out there and prove us wrong.