Why Crowd-Funding Will Change the Way Movies Are Made 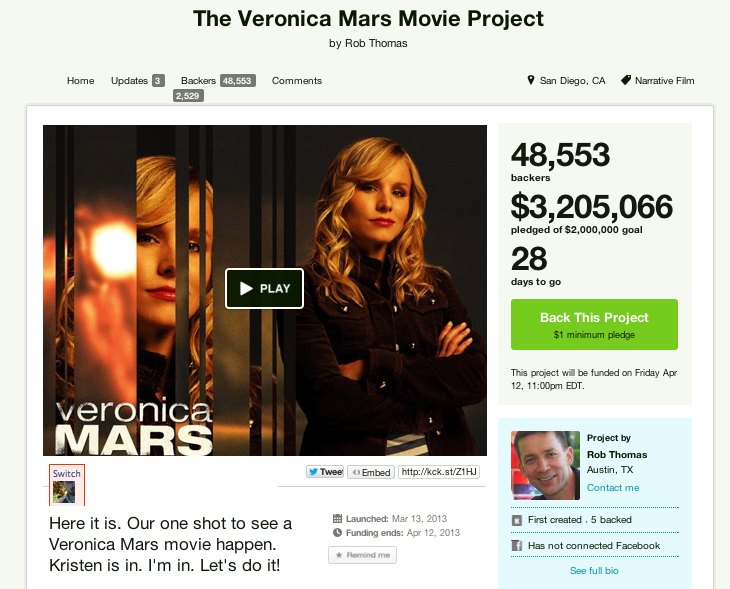 As you may have heard by now, the creatives behind Veronica Mars have successfully raised enough funding to make her movie.  What's most surprising is not that they reached their goal so quickly or that there are so many Veronica Mars fans out there, although both facts weren't exactly givens only a few days ago. Rather, the biggest thing to take notice of here is that by doing so they may have changed the way movies are made…for better and worse.

Let's take a step back for a moment and consider what this means. Hollywood movies for a long time have been nothing more than an investment.  With any investment, there are risks involved. The risk involved in an action movie that has mass appeal is less than the risk you're taking by funding a dark comedy, but as Jack The Giant Slayer has proven, that assumption isn't always foolproof.

And that’s why this Veronica Mars experiment could change everything. It could remove much of the risk studios take every time they green-light a movie.

If the studios embrace this model they're going to be getting the audience to finance entertainment end-to-end.  That means we'll pay twice for content while the studios will eliminate any financial risk.  Talk about a win-win for them. If they're able to pull it off, the only thing they’ll ever worry about is whether or not they need to have a golden bathtub in every single room of their 10-bedroom mansion.

Of course this is taking the concept to an extreme since it’s obvious studios aren't going to be asking for money on Kickstarter for their $100 million action movie anytime soon. Plus there are plenty of film projects on Kickstarter that don't raise anywhere near what Veronica Mars was able to raise.

Nevertheless, the money these producers and creatives were able to raise changes the equation.  If a studio is looking to fund a $5 million project, will they now expect those producers and creatives to raise a percentage of that cost? Or all of it? Perhaps they'll use Kickstarter as a litmus test to gauge how much interest there is for the project, thereby reducing the risk of a financial flop once its released. Again, talk about a win-win for Hollywood.

The studios gaining more profit at our expense is not appealing, but it's our own fault.  Or at least it's the fault of all the Veronica Mars fans out there since they're the ones who made this a reality. You can't really be mad at them though. They wanted to see more and they put their money where their mouths were to ensure it happened. Still, it showed the studios that they can profit off customers on both ends of a project. That is not encouraging development for any paying customer, regardless of their interest or passion.

On the other hand, there's an argument that this new paradigm will end up working in the favor of consumers. I can have direct control and influence over the 10 different Kickstarter campaigns competing for my money.  I would love the ability to help ensure the next Memento gets made instead of seeing Fast & Furious 6 and if those types of projects were on Kickstarter I'd have control over that process. But that argument can easily get sucked into its own logic since the numbers show there will be more people who want to see Fast & Furious 6. The only difference is under the crowd-funding model, they pay for it twice. And I'm still not paying for it at all.

Exactly how this impacts the movie industry remains to be seen, and if there's one thing executives have shown, it's how slow they are to change how they do business. But the one rule of history is to follow the money, and if they see that they can save money and make customers pay more, they'll be much more open and willing to change their method.

The creators of Veronica Mars were able to basically produce a budget out of thin air, reducing the financial investment for the studio, and show them the production has a good chance of turning a profit. This means the risk on both the front and back end of the production is reduced. Drastically.  Will that lead to similar changes throughout the industry? And will it mean we're going to have to pay for our entertainment before it's ever even produced?

Time will tell. But if this is what it takes to finally get us a big-screen version of Charles in Charge, I'm all for it.