SD memory cards are the most popular format now, and with multiple brands available, there is ample choice, although it can be confusing to pick the best card for your needs. Here is some help. 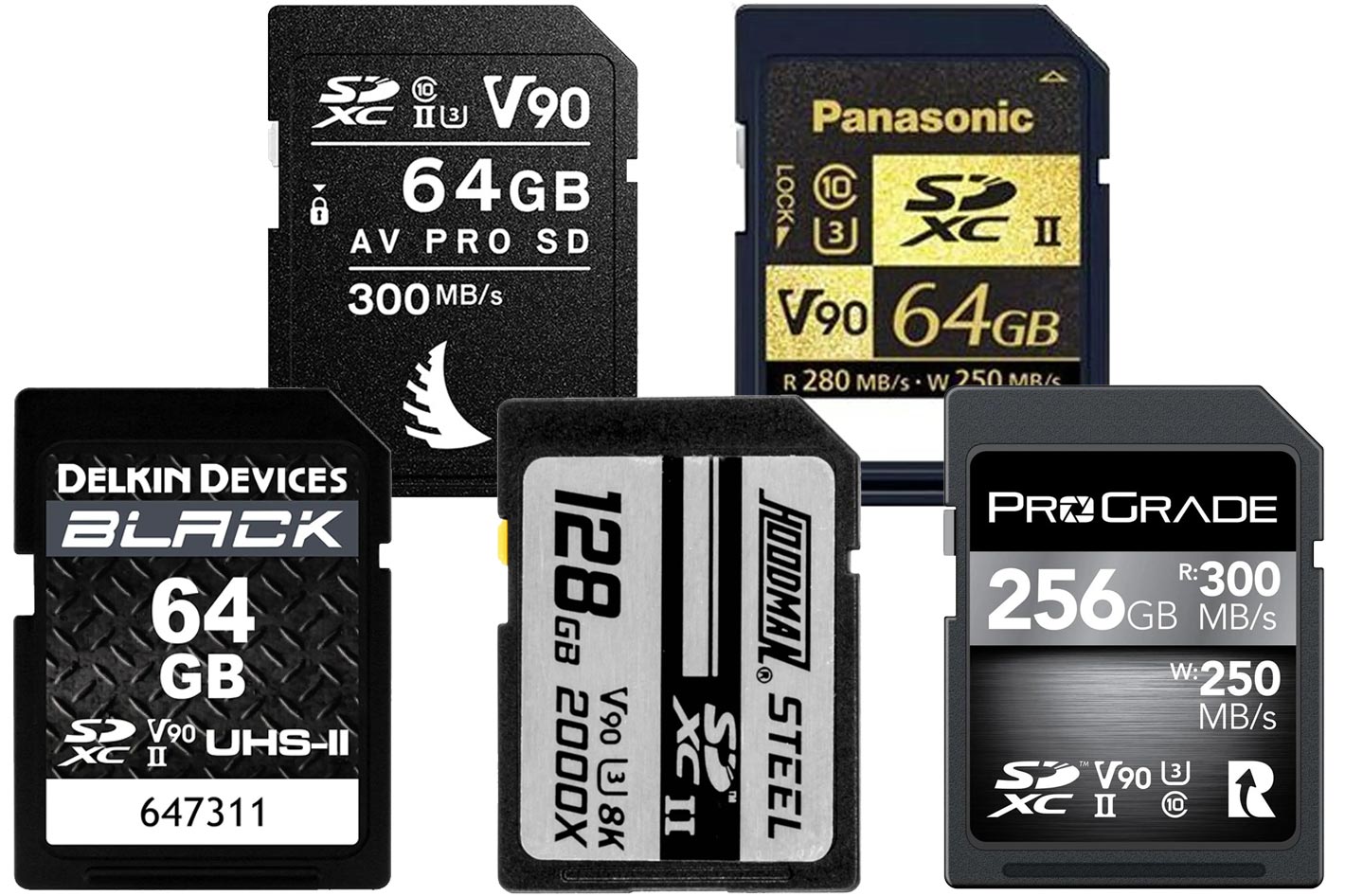 The variety of numbers inscribed on a memory card may be confusing sometimes, but one piece of information is key if you’re a video shooter: the V number. The higher the number, the faster the card.

SD memory cards have one thing in common: they all look and measure the same, but they come in four formats: SD, SDHC and SDXC and SDUC. The base SD card has a maximum capacity of 2GB, SDHC cards give up up to 32GB, SDXC cards can support up to 2TB and the newest version, SDUC can hold up to 128TB. One key piece of information to remember: this definition refers to capacity and is not related to speed, meaning you can have an SDHC card that is as fast as a SDXC.

The definitions for SD cards do not end there, though, and you just have to look at one card to discover a multitude of numbers and symbols that, if you’re not familiar with them, need a device like the Rosetta Stone to be understood. The quantity of information used to classify and identify memory cards has changed since the first versions were introduced, and there are wide discrepancies in memory access speed depending on the SD memory card manufacturer and brand that don’t help consumers to choose when buying a card.

Varying speeds make it difficult to make out which card can surely record streaming contents. Recording video requires a constant minimum write speed to avoid ‘frame drop’ during recording for a smooth playback, and as we’ve noted above, capacity as nothing to do with the speed the card can achieve, so the SD Association has defined rules that make it easier to know what each type of card is able to offer. 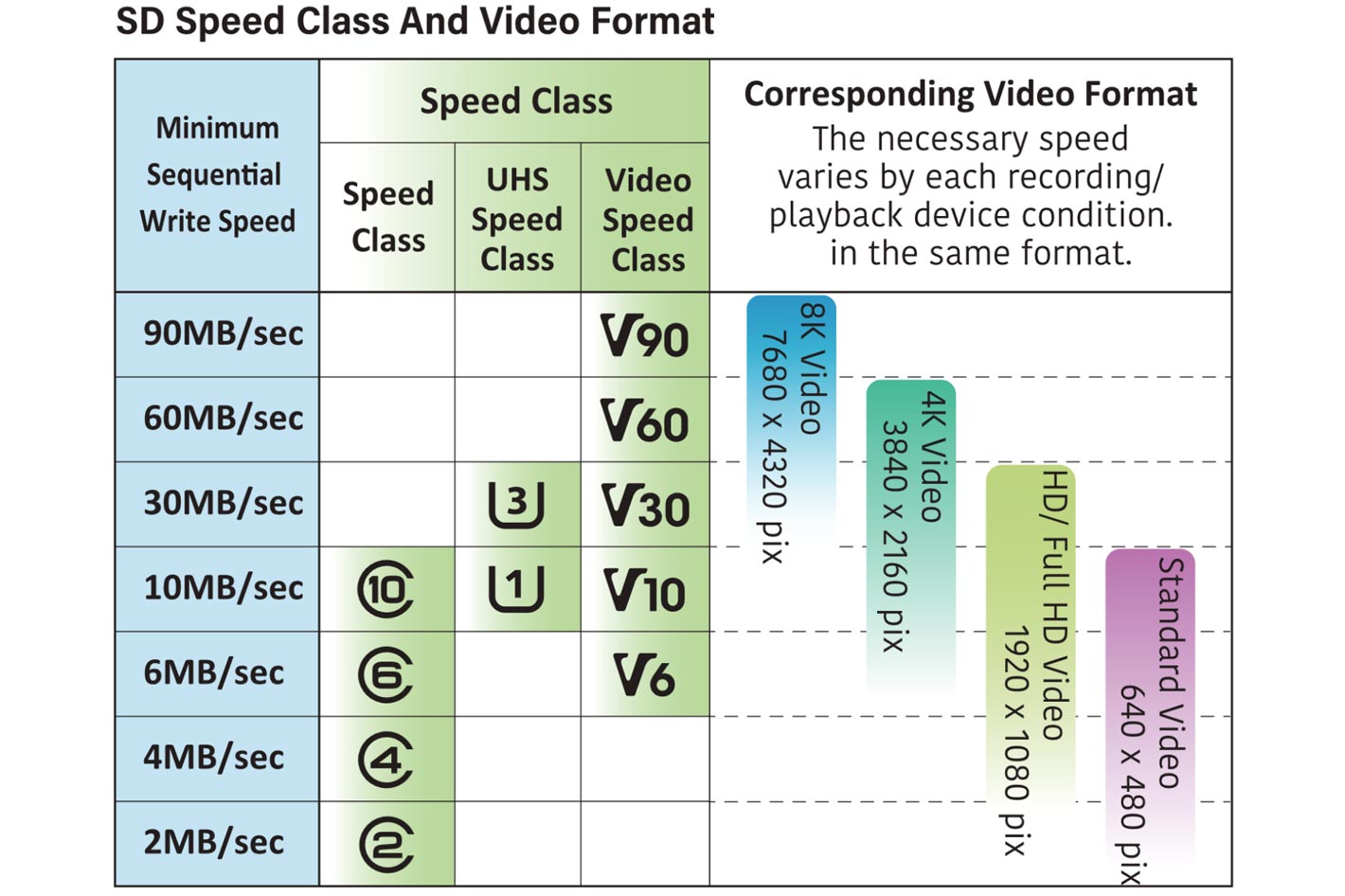 Yes, I know… now things start to get a bit confusing, with so many numbers and symbols. It’s also important to note that Speed Classes, says the SD Association, are “mainly useful for camcorders, video recorders and other devices with video recording capabilities. Regarding bus mode, it is necessary to use a bus mode fast enough that does not affect memory write speed. C10 is used in High Speed mode or faster, U1 and U3 are used in SDR50/DDR50 or faster, and V60 and V90 are used in UHS-II mode or faster.” 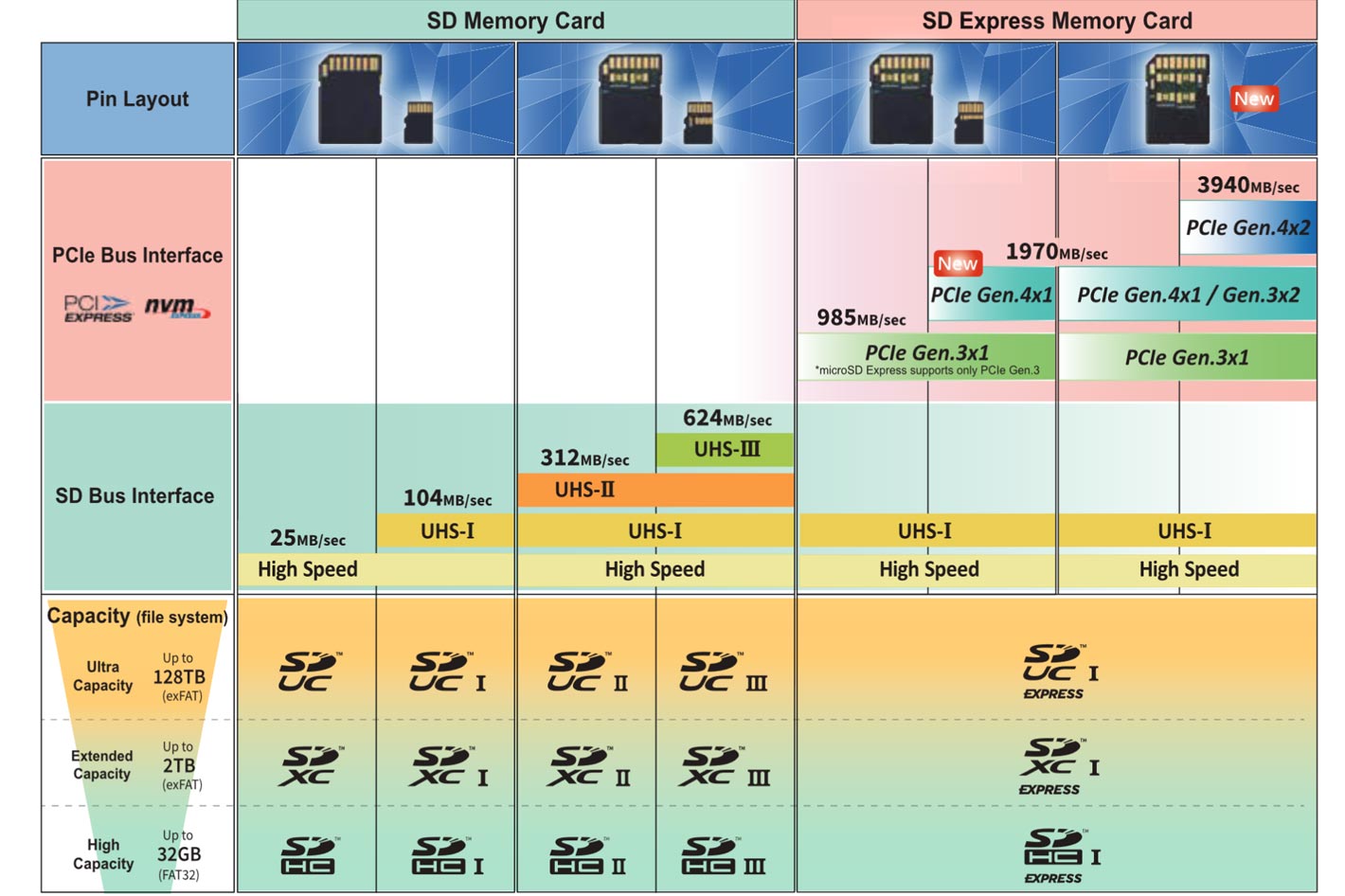 While every bit of information is important, the V speed number is essential for video shooters… or anyone who wants to have cards with a clear indication of the minimum sustained write speed, because that’s what the number reveals. That’s where the V90 comes in. V10 and V30 didn’t give you that sense of speed, but with V60 and V90 it’s visually present. The shape of the numbers contributes to the notion of speed, and speed is what’s all about when it comes to V90, the top of the line for memory cards used for video.

The new capture protocol of SD 5.0, which is reflected by the Video Speed Class designation, was introduced in February 2016 by the SD Association as the preferred speed class for a variety of new applications. Video Speed Class provides new capabilities for consumers and a new enabling technology for the SD industry. From a consumer’s, and application developer’s, point of view, SD 5.0 enables a new generation of applications that require extended capture performance of up to 90 megabytes per second (MB/s). 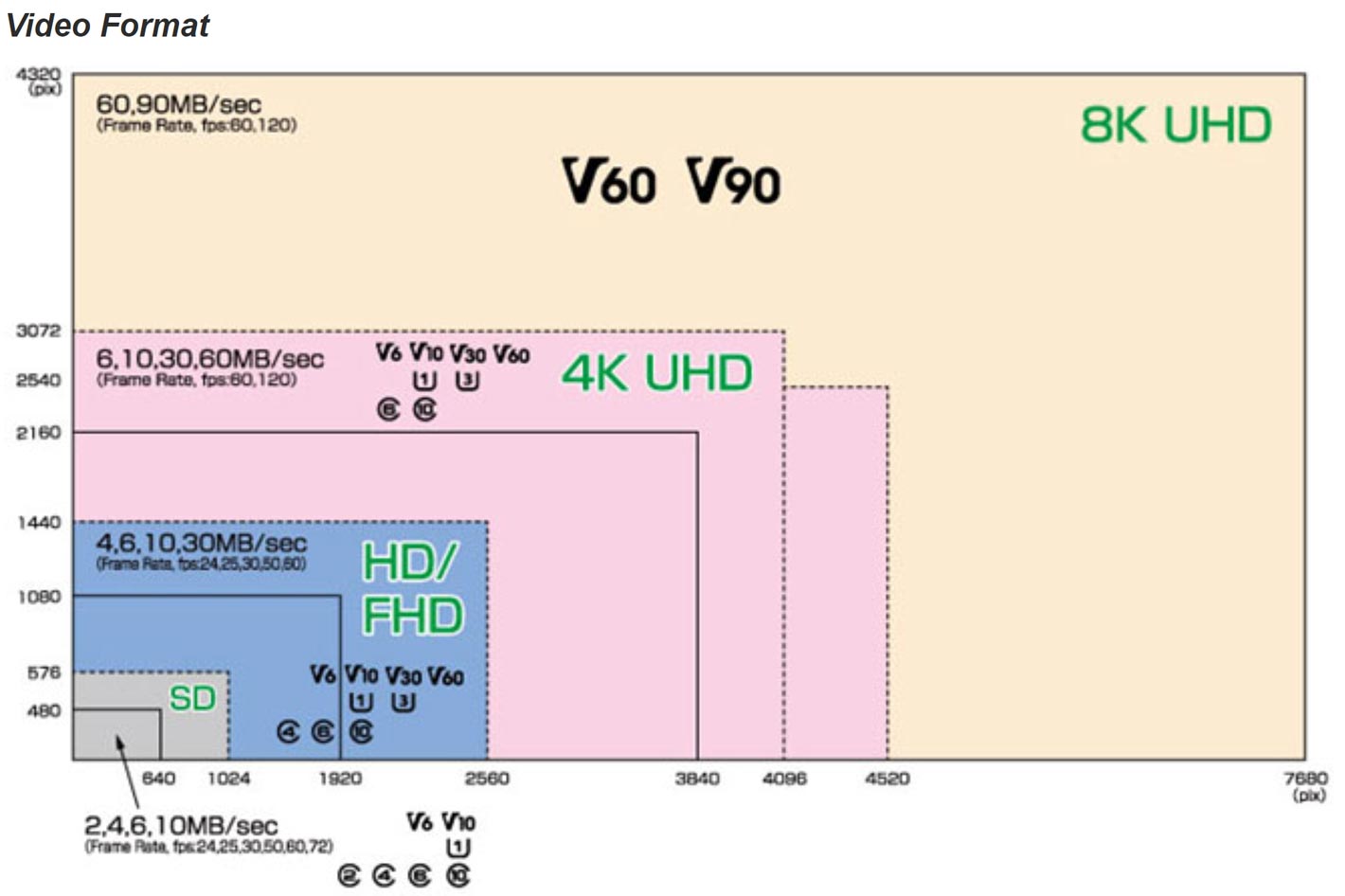 Rule of thumb: Video Speed Class is the best choice

V90 cards are designed to be future-proof and are ideal for anyone shooting 4K and beyond – 8K, for example – with frame rates of 60 and 120 fps.  Still, the SD Association notes that “each of the given speed class methods defines different card access methods closely related to the underlying NAND technology. The match, or mismatch, of each speed class method to a specific NAND technology may lead to SD memory cards that meet Video Speed Class requirements for a given capture rate, yet not meet the requirements for the equivalent Speed Class or UHS Speed Class. As an example, an SD memory card may meet V30 requirements, by supporting 30 MB/s capture using the Video Speed Class protocol, yet only meet C10 requirements, supporting 10 MB/s capture with the Speed Class protocol.” 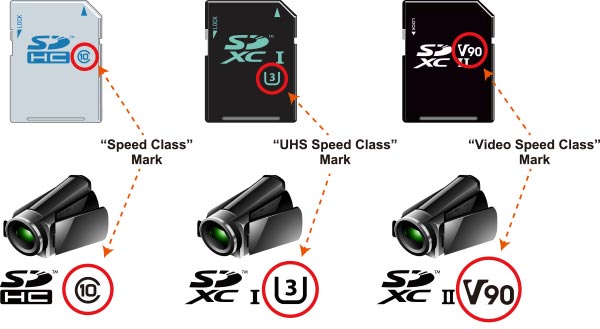 Yes… it can be a bit confusing. There is one key advice, though, and it comes from the SD Association: despite the large number of variables, one rule remains true: match the SD memory card to your specific application’s requirements. The protocol speed and type specified by the application needs to be matched. A guide to help consumers select the right memory card is usually provided in device owner’s manuals. As a rule of thumb, if the application offers multiple options, Video Speed Class is the best choice.

The SD Association concludes that when available, Video Speed Class is the preferred access method for SD technology, as it will provide much faster recording for the exotic video technology of the future, while enabling the use of future NAND technology in SD memory cards and support the new standard protocol for hosts/applications to write efficiently to SD memory cards. The most important advice to consumers and users of all types is to continue matching the SD memory card to an application’s recommended speed class to continue enjoying the best recording and playback possible.

The most recent advancements in technology point to a path towards the future. In March 2020, the SD Association (SDA) released its SD 8.0 specification (SD8.0) offering the fastest SD Express card capable of delivering gigabyte speeds via dual PCIe lane support and PCIe 4.0 with NVMe. According to the association, the newly introduced SD8.0 with bit rates of up to 2GB/s and 4GB/s will open even more opportunities for extra high performance solutions of removable memory cards leveraging the globally known and popular SD size form factor. This new protocol allows SD Express memory cards to serve as removable Solid State Drives (SSD), as ProVideo Coalition noted previously.

We’re spoilt for choice, and you just have to look at Filmtools offer in V90 SD memory cards to find how true that is. There are solutions for all needs and purses, from a $83.99 ProGrade Digital SDXC UHS-II V90 Memory Card – 64GB to the Angelbird 256GB AV Pro Mk 2 UHS-II SDXC Memory Card dual pack for $794.90. A choice of brands from ProGrade to Panasonic, Delkin Devices or Hoodman are available, with different capacities, but all offering V90 in terms of speed.

As Filmtools indicates, these V90 memory cards allow users to experience the next level in terms of content storage. Capable of reaching high read and write speeds, these V90 cards offer support for high-frame-rate recording. Widely compatible, these cards are a perfect match for top industry cameras such as the Canon EOS R6, Fujifilm XT4/XT3 Panasonic EVA1, the Sony A7/A9 plus many more! For maximum reliability, and advanced functionality, be sure to include these V90 Memory Cards for your next shoot.