Here we are back again with another round of Useful Tools for Editors. Today there’s a few things that can help reduce the noise in both your audio and your video as well as some options to beauty up your image be it someone’s skin or bringing it into a more “legal” area for broadcast. We end with a couple of educational resources. Off we go.

The magical repair tool that is the iZotope RX line got an update at IBC 2014 that takes it to version 4. I remember seeing a demo of this thing at the 2013 Southeast Creative Summit and was blown away as it was the first time I’d ever seen it in action but I had undoubtedly heard the results many times. It’s been around for awhile but I think it’s lesser known in video circles. Being a repair-based tool I can see it coming in especially handy for video editors as we try to deal with sound recorded in less than ideal situations on less than ideal microphones.

This Pro Tools Expert review is a nice look at RX:

While the iZotope RX line is a standalone application it’s plug-in format means you can get this power in your NLE: 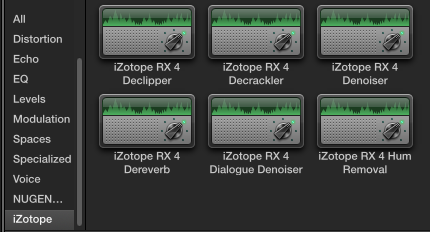 There’s your RX 4 options in the FCPX audio effects browser.

That’s a big deal for video editors as we may not always move into a digital audio workstation for mix.

Who says we never have any Useful Tools for Windows users? Cinemartin Denoiser is a denoise tool for Windows that is a stand-alone application instead of an NLE plugin. It comes in three different flavors (Standard, Pro and Gold) and looks to have quite a lot of both input and output formats. On output one possible format is ProRes so that looks to be the ever elusive ProRes encode on Windows. My guess is it’s not the Apple official ProRes encode but it is there.

Check out the buy page for prices and feature comparisons. The parent company, Cinemartin, makes several different tools for film and video production and post. One of those is an Adobe Premiere Prores Plugin Exporter for Windows. I’m guessing that’s not an official Apple-blessed option either so there might be issues with compatibility somewhere but there it is. 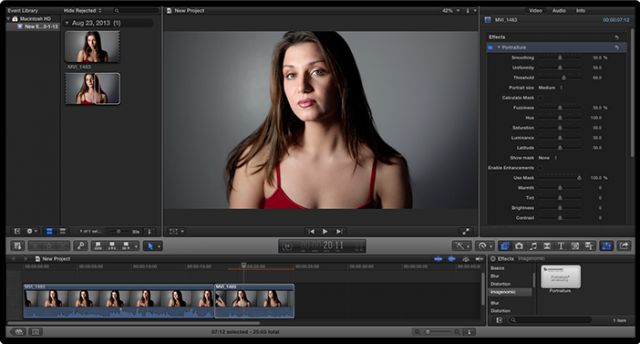 It works in FCPX along with a lot of other video hosts.

Portraiture for Video is available both as a stand-along application or as move video editors will want it, a plug-in for Adobe Premiere Pro, After Effects, Final Cut Pro X, Sony Vegas Pro 12/13 and DaVinci Resolve. That means it runs on both Windows and Mac. Pricing might be a bit controversial as it’s a subscription model at $99 / year but there is a 15 day free trial available. I see where Imagenomic also make a noise reduction tool for still photographers so maybe that’ll come to the video world soon if the beauty tool is well received. The still image tools aren’t a subscription model.

Eyeheight has long been around as a producer of “broadcast compliance and modular play out solutions” and now they’ve introduced an FCPX version of their Broadcast Legalizer Plug-in. This plugin has been available for Avid Media Composer, Adobe Premiere Pro CC and FCP7 for awhile and this is their first option for FCPX. 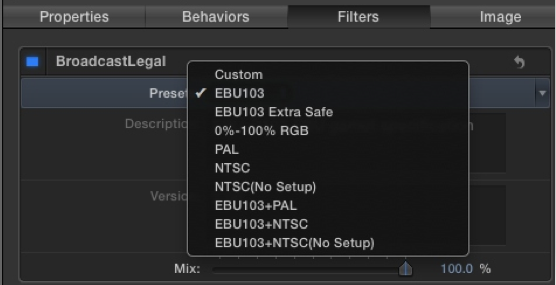 From the Eyeheight pdf about the broadcast legalizer for FCPX. I guess this is what you see in the plug-in controls.

While not cheap when compared to FCPX’s price it’s not expensive when what you need is to get a program to broadcast television and the built-in broadcast safe FCPX tools are good enough. If you have to complain about the price then this tool probably isn’t for you. There doesn’t seem to be a specific webpage for this FCPX tool on the really terrible Eyeheight website so just scroll down the front page and check out the pdf. Request a demo as well if you want to give it a test drive. Eyeheight also announced their Compliance Suite for FCPX way back at IBC 2013 but no mention of that on their website either. I contacted their PR folks off the Eyeheight website to try to find out more but didn’t hear a word back. Sort through the Eyeheight news page as that seems to be the best way to see what all they have.

CineFlare and Story Pop for FxFactory

And speaking of noise, Noise Industries recently released two new additions to the always growing FxFactory line of plug-ins and effects. These two new options are both for Final Cut Pro X and both feature some cool ways to add animations, text and graphics right in your FCPX timeline.

CineFlare brings us the $49 Kinetic Badges which is a whole slew of vector graphics and animations. The tutorial video says “several hundred combinations.”

Story Pop is another tools from Stupid Raisins and is made to emulate a whiteboard and drawing on a whiteboard including a hand actually doing the drawing. Dig into the tutorial video for more on Story Pop. It’s also $49. Remember that all FxFactory plug-ins are always free to try through the FxFactory system.

And off the topic of plug-ins for a bit here’s a couple of educational resources you might find useful:

You may have long ago downloaded the DaVinci Resolve training from Ripple Training but recently, with the release of Resolve 11, they’ve added Editing in DaVinci Resolve 11 to the list of titles. I’m very interested in this newly expanded editing capability of Resolve and I’ve played with it a bit here and there. I gave some suggestions to the beta team and it looks to have a lot of cool features. I just need a break in the regular editing schedule to properly kick the tires. 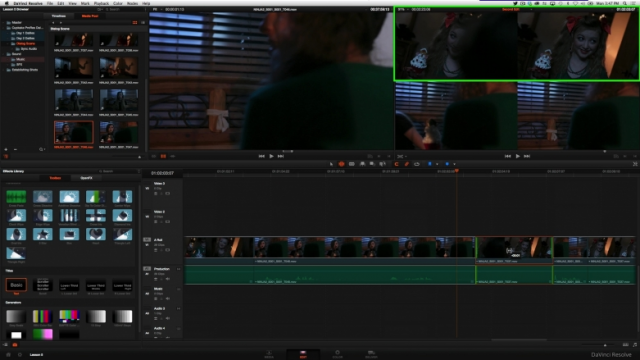 That’s the 4-up editing view for things like Slip and Slide in Resolve 11. That view will look familiar to many editors.

If you’re a twitter user then you might recognize the name Michael Kammes. Michael is one of the smartest technology guys that I know and he’s long used that knowledge as part of Key Code Media. He has long blogged interesting topics and opinions on his website. A couple of years ago at NAB we sat and ate way too much seafood. [Michael has just launched a new web series called 5 Things. Michael’s description of 5 Things is this: “it’s addressing 5 real world tech questions that creatives and tech folk have about gear and software. How is really works, gotchas, pricing, etc. Less marketing BS, more real world.” I like to hear real world.

The first episode is about Adobe Anywhere and future shows will address things like codecs, storage and (of course) 4K!

While you can watch the embed above for a different experience head over the 5 Things website if you have Flash enabled. When checking out the Adobe Anywhere episode you might see an option to add bookmarks to the video. It’s a Flash-based technology that lets you bookmark places in the video and see related content from that part of the piece. Give it a try if you’re on a Flash-supported device as it’s pretty cool. I’m sure Michael would appreciate a Like on the 5 Things Facebook page as well if you’re into that Facebook thing.