It pains me to put this little “tool” in the list as I was working with a developer a few years ago on something very similar.* Insert lesson on follow through here Mr. Simmons*. Since most every NLE these days is real time those long render breaks are a thing of the past. For the most part that is a good thing but what if you WANT a break! Enter Corporate Avoidance.

The idea is rather simple: load up a fake render bar (or something similar) so you can take a break. Not very high concept but maybe something needed in a world of Mercury Playback Engines and Dual GPUs! Corporate Avoidance is for Mac only and is free. 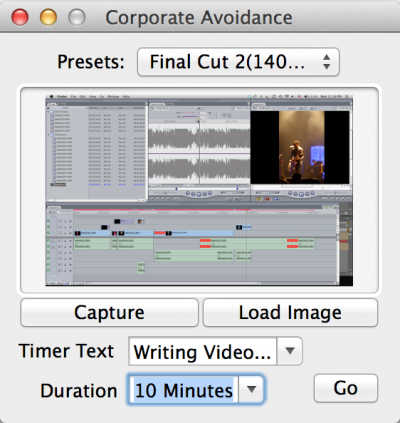 The preset images are old but you can capture a screen grab so you can have Avid Media Composer or Adobe Premiere Pro as your fake screen of choice.

If you’re doing a lot of vfx and finishing work in After Effects then Conform Studio might be well worth the $79. Conform Studio is a “set of plugins that help you automate and manage your vfx workflow: precompose, batch rename, trim, extract, and replace comps with rendered files.” I don’t do a lot of that myself but just the description makes it sound like it’ll help relieve some of the more mundane tasks that you might have to do.

There’s a full set of videos as well as a demo available on the Conform Studio aescripts site. Conform Studio comes from the folks at That Studio and is a result of their collaborate, around-the-world-workflow. And speaking of That Studio …

We talked with both That Studio and Rampant Design Tools at NAB 2014 about their strategic alliance that gave birth to Indie Essentials.

Indie Essentials! from That Studio on Vimeo.

The cost is right at $399 (seems it’s gone down to $349 since publication!) for the complete library (but if you dig around online you can probably find a discount code) and those updates will come for the life of the product. The download is large at over 100 GB but the files themselves are high bit-rate H.264 .mov files so that means they are reasonable in size and can be utilized in most any editing or effects application.

EditReady is a $50 app from Divergent Media (who also make ScopeBox and ClipWrap) with some narrow focus when it comes to it’s purpose in life: transcode QuickTime files to edit-ready formats. There’s support for both ProRes and DNxHD. EditReady is fast and easy to use but if you want to dig into your files a bit deeper you can apply LUTs or edit metadata. 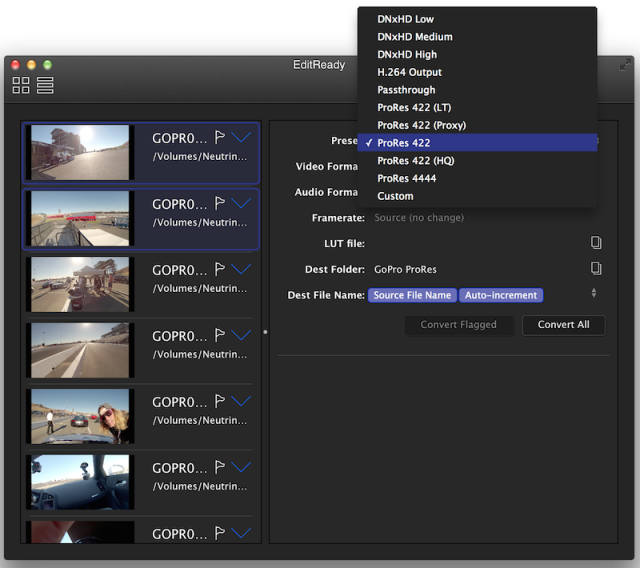 A simple interface means you get to transcoding quickly.

I’ve used EditReady with quite a few batches of GoPro footage and it is very fast. It’s a brand new product so I hope it evolves into converting other formats like .mxf files. It could also become a go to app for all things transcode if it adds options like timecode and reel name support as well as the ability to transcode to small H.264 files with burn-in timecode for client review. But that’s just my own person wish list. As it stands now EditReady’s strength is in speed and not features but according to the EditReady website the app is “completely modern and ready to grow. We’ve got an exciting roadmap for the future!” I look forward to see where EditReady goes.

If you work in color grading or finishing the you’re probably intimately familiar with EDLs and XMLs. Thankfully my interaction with them is mainly generating rather than importing and sorting through them. If you do a lot of the latter then EDL Spy might be a nice addition to your toolbox. This description is from the EDL Spy website:

EDL Spy is an application that lets you extract file names from an Edit Decision List, Final Cut XML or any other kind of footage text list (e.g. an Avid Media Summary). It can then search your harddrives for the corresponding files and copy all of them to a new location. EDL Spy also includes tools to index folder contents and to quickly copy or create complex directory structures.

It looks like a rather easy to use and complete tool. There’s an FAQ as well as tutorials to help understand what EDL Spy can and can’t do. Here’s a Quick Start:

There’s a free demo available and pricing is around 50 Euros but check the purchase page for more info. EDL Spy is available for Mac and Windows and require Java to be installed. Read over the Lift Gamma Gain forum for more info on the app, which is where I found it.

Along the same lines as EDL Spy above is an app called Resolve Collect. This app has a singular focus of copying source files from a DaVinci Resolve project to a single destination. While not super cheap at $50 it’s probably the kind of tool that, if you need it, $50 is a small price to pay for its usefulness. There’s a good tutorial article here on how Resolve Collect works. 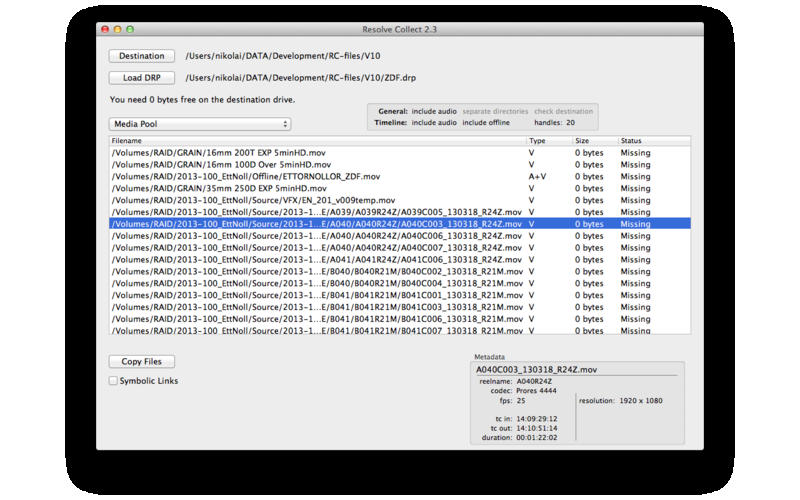 A simple, text-based interface is about all you need to load up a Resolve project and collect those files to a desired destination.

You can also follow along in this Lift Gamma Gain thread called What features would you like to see in Resolve Collect? There’s great discussion in there with the Resolve Collect creator. Sounds like there are some nice features coming.

foolcat is a $65 piece of software that “generates nice camera reports of any folder full of RED, MXF or QuickTime clips in HTML and PDF format.” This could be a very nice thing for productions to include on the hard drive they are sending to an editor. Think how helpful that would be if the editor could open the PDF and see exactly what all they have on a hard drive without digging through a bunch of footage folders! I like the idea of just knowing how much total footage is on the drive before editorial begins. It’ll even generate an HTML version so you could toss that online for the editor to see even before shipping the drive!

foolcat looks like it’s been around for awhile as it has quite an extensive version history. There’s a review of foolcat here for more info. 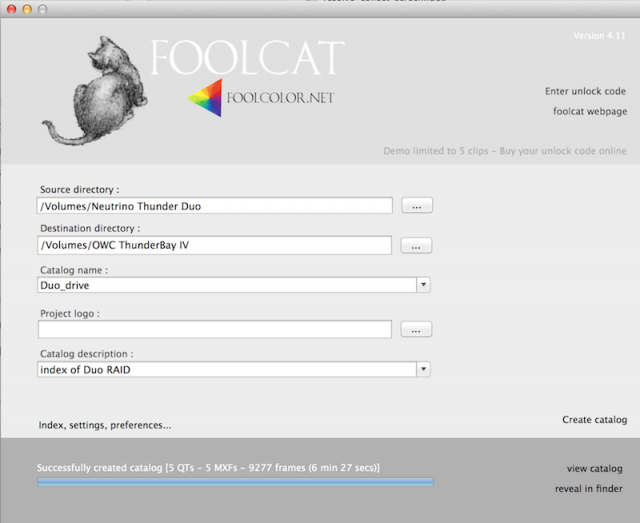 It’s easy to use fool cat, just load the drive and pick a destination for your thumbnails it has to create. It’s pretty fast scanning the drive too.

foolcat comes from a company called foolcolor and they actually make quite a few useful looking tools (mainly with a RED R3D focus) so dig around their site to see what else they have to offer as well as what is still in active development.

If you’re a Final Cut Pro X user then this might be the best $12 (or so) you’ll spend. Final Cut Library Manager is to FCPX 10.1 and above what Event Manager X was to 10.1 and below: a cheap must have utility to make dealing with FCPX easier. The app comes from Arctic Whiteness (of The Touch fame) and allows you to do most anything you’d want to do with an FCPX Library like sorting, searching, working with and taking notes on them.

Some of its handiest features (like deleting proxies and render files among others) have been replicated in the recent FCPX 10.1.2 update but the developers have promised to continue to create new and cool things for it to do. I’ve heard stories of user suggestions integrated within days. They address the 10.1.2 situation in a popup in the current version of the app.

The interface is full of info about your FCPX Libraries. Hover your mouse over the fuel gauge bars and you’ll see color coded pop-ups about what you have in the Library.

Final Cut Library Manager is a great little app and one of those must have add-ons to FCPX. Most likely you’ve heard of it if you use FCPX in any real capacity. If you’re one who has yet to purchase it then head over and get your download now.

I’ve never used this After Effects enhancement but it sure does sound cool. trackFinger for After Effects “allows you to record the movements of the fingers (up to ten) on the screen of the iPad or the iPhone and then send the tracking data as keyframes to Adobe After Effects .” That just sounds like some mad voodoo.

It looks like there’s some complex stuff going on and it might take quite a bit of effort to use trackFinger but it’s the only thing like it that I’ve ever heard of. If you have any experience with trackFinger please let us know how it is in the comments below.

The trackFinger guys also make trackSlate which is their own iOS slate app that is a component of trackFinger. What’s really cool about trackSlate is it looks like you can connect two or more devices to manage them together. If you can get the timecode between them all synced it could be a great supplement to multicam shoots. Hit up the try and buy page page on the trackFinger site for information on pricing as well as App Store links.

The tools in this Useful Tools for Editors edition all come from small developers who seem to have one thing in common. They are users of real post-production tools and they’ve developed these apps to help their own workflow and solve their own problems. They are now sharing these tools with the community. It’s great to see so many of these small, narrow focused tools available and easily distributed. Keep up the good work developers!!