The first ever Final Cut Pro X Creative Summit has come to an end out in San Jose, California. It looks like it was a great weekend with a ton of socializing and learning about all things FCPX. I wanted to go but previously booked work took me to the other end of the country. I kept up with the event via social media and there were a number of new product announcements out and around the Summit. Add that to other new tools and we’ve got a fresh edition of Useful Tools for Editors.

The first ever Final Cut Pro X Creative Summit has come to an end out in San Jose, California. It looks like it was a great weekend with a ton of socializing and learning about all things FCPX. I wanted to go but previously booked work took me to the other end of the country. I kept up with the event via social media and there were a number of new product announcements out and around the Summit. Add that to other new tools and we’ve got a fresh edition of Useful Tools for Editors.

The folks at Frame.io have introduced a Final Cut Pro X Share extension for their collaboration service. You download the application from the Mac App Store and it installs a share option when exporting.

There’s some good options to choose in either exporting the timeline as an edit or exporting individual clips. This points toward Frame.io’s intent to be more than just a review and approval service to have clients sign off on an edit. 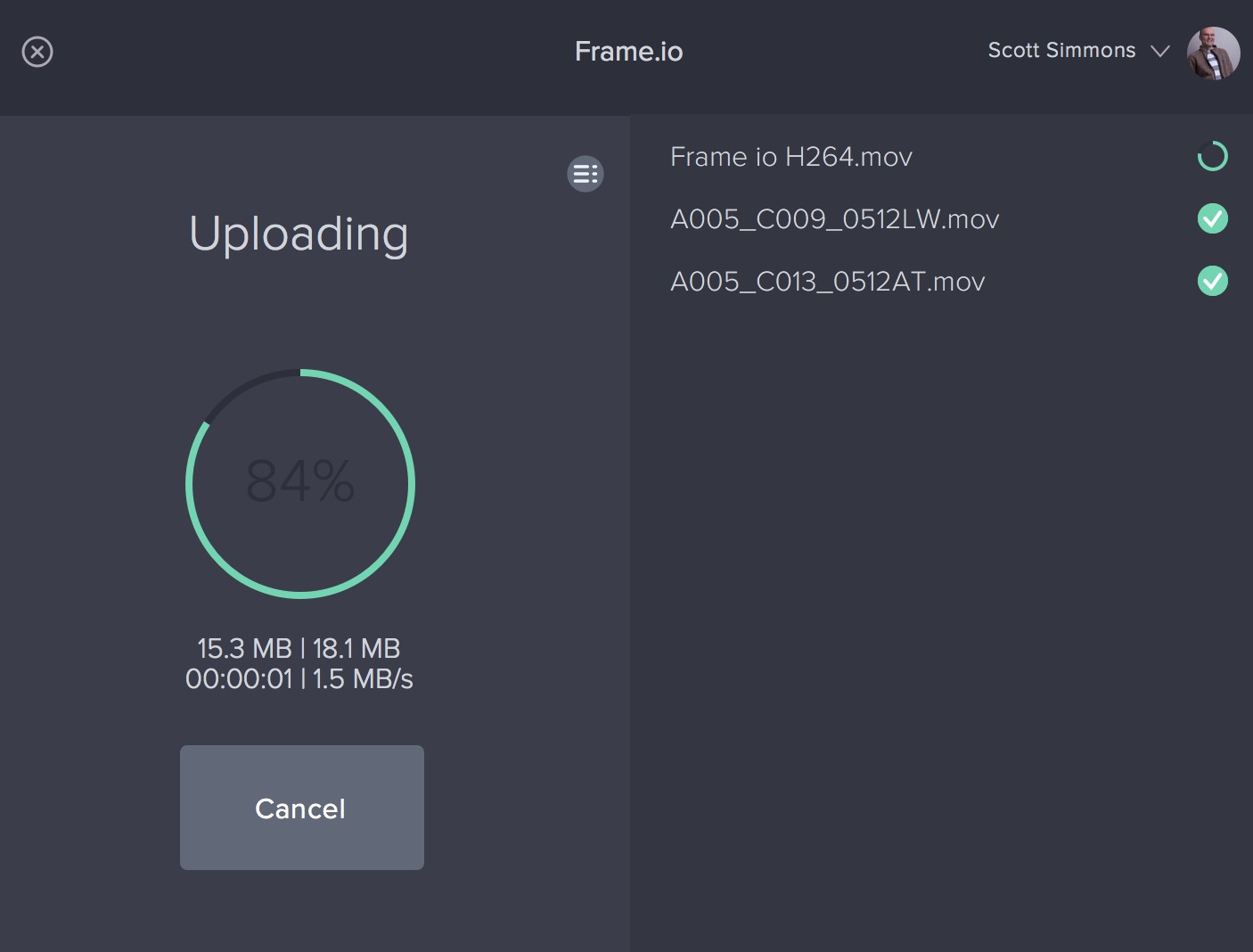 I’m going to speculate here that there will be more options added to this FCPX integration in the future. Frame.io is very new and they have been adding features since launch. There’s been several comments on Twitter that people would love to see some Adobe Premiere Pro integration (and we can assume Avid too) so hopefully that’s not far behind.

I don’t think that the folks from Motion VFX made the trip to California for the Summit but they have released a fun little product for FCPX called mBehavior. It’s simple in concept and looks like it could save a lot of time: $49 for 150 presets of keyframeless animations.

These behaviors are all Titles in the FCPX effects browser which threw me at first. As you can see in the video you apply them as a title above what you want to animate and the animation happens on the clip below. I think where these will be most useful is in titles and graphics. 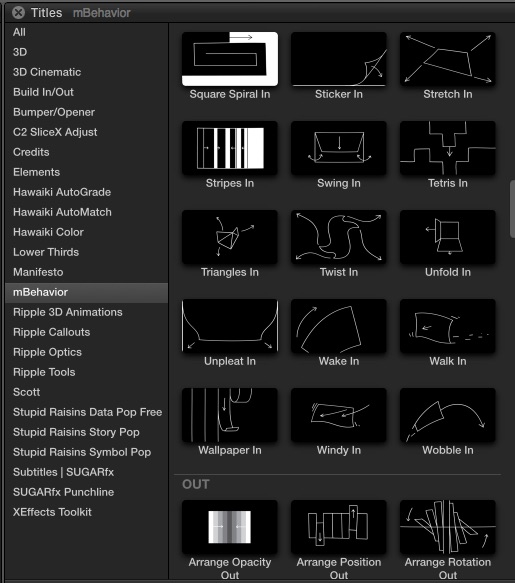 To make mBehavior work to its full potential you create a Compound Clip out of the mBehavior titles and what you are trying to animate. That will create the proper alpha channel to use these things as transitions. If you want to change the behaviors step into the Compound Clip and make adjustments there. Plus the mBehaviors can be stacked to create a lot of fun stuff. Some of the mBehaviors have Published Parameters where they can be tweaked from the default, others do not so it’ll take some time to get to know them well … but you’ll have fun in the process.

A lot of the mBehaviors are goofy stuff like bounces, wobbles and even a Tetris In and Out so they might be of limited usefulness in a lot of productions but if you’re doing “quirky” stuff mBehavior could quickly become indispensable in the time they save.

Too add another layer to the fun and quirky add-ons for FCPX the FxFactory developer Stupid Raisins has created Symbol Pop. These symbols are also a set of titles that are divided into 12 categories.

Drag a category over to the timeline and you’ll get a pop-up in the Inspector to choose exactly what symbol you want to use. 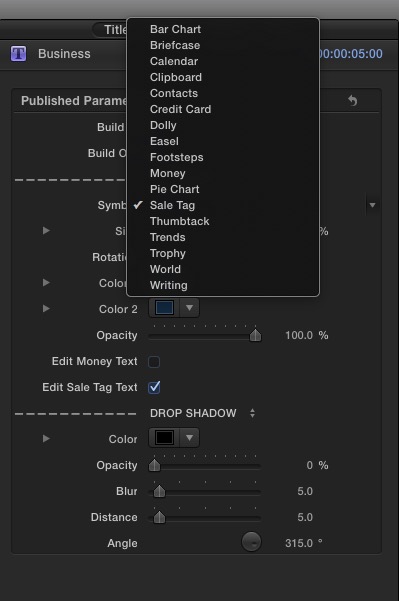 Depending on the symbol chosen there may be a place to edit the text that appears on the symbol. These are simple two color vector style graphics (the color are editable) that can be scaled with no loss in quality. All the symbols have a build in and build out that can be turned off. There is also an animation mid way through the duration of the symbols. I didn’t see a way to turn those non-build animations off but that would be handy as well so you could freeze a symbol in a certain state for a design element.

Like the mBehaviors above Symbol Pop isn’t going to be for everyone but if you need this type of graphic element you really can’t be much simpler than the $49 Symbol Pop. Sure you (or someone else) could design something similar and sell them as key able motion graphic elements but this is where FCPX shines. These things are prebuilt with animations, editable, affordable and available right in the FCPX interface.

Intelligent Assistance made a name change to its product that takes an FCPX XML and translates that into a FCP7 compliant XML. It is now called XtoCC. There seems to be a lot more customers these days who want to move from FCPX to Adobe Premiere Pro CC and the whole Adobe Creative Cloud that a name and icon change was warranted. Philip Hodgetts explained the name change in more detail at the Summit.

XtoCC is available for $50 on the Mac App Store as well as from the Intelligent Assistance store. The developers probably make just a little bit more money when you buy it from their store. There’s not much more to say about XtoCC. I’ve used it and it works well.

Were you around the Final Cut Pro X world in 2013? Do you remember Final Cat Pro? The set of Services that attempted to extend the functionality of FCPX? Final Cat Pro died not too long after its birth (and it died without any real notification as the website just went offline without any note to users) when FCPX 10.1 arrived as it broke what Final Cat Pro was trying to do.

It is being reborn as FCPXTRA. This updated version looks like it remove some of the old services like making split edits but it retains its most useful feature of easily adding keywords and notes. Probably its most clever thing is using your Mac’s dictation to create those notes.

There’s nothing in this tool that can’t be done with what existing in your Mac already so FCPXTRA is just making it easier. I think it could be handy for documentary-style editing where you might be making a lot notes on footage.

Old Final Cat Pro customers should see an email with a way to possibly get FCPXTRA for free … which is a good thing since FCatPro died without so much as an email to paying customers (at least I never got one). Let’s hope FCPXTRA lives on.

If you are an FCPX user you probably already own CoreMelt’s SliceX and TrackX tools that use Mocha’s planer tracking technology to do lots of amazing stuff easily.

DriveX: drive animations with mocha tracking. Now you can connect track data to particles 3D text or any group in motion. DriveX will contain 30 motion templates for commons looks but allow unlimited power for the advanced user. Releasing within one month.

The product was announced at the Summit and looks like it’ll ship within the next month. There’s nothing about DriveX on the CoreMelt webpage yet but there is a preview page on Facebook. Let’s hope there is more info soon that isn’t on Facebook.

Automatic Duck for FCPX to go to After Effects

You read that right. Wes Plate was at the FCPX Summit to sneak peek a new Automatic Duck that will translate Final Cut Pro X timeline into Adobe After Effects. No release date yet but if you watch the Automatic Duck site I would guess it will be announced there.

If anyone can properly translate an FCPX XML into AE it’s the Automatic Duck team. Hit the mailing list and I bet they’ll keep you posted.

Kinda sorta announced at NAB 2015 Avid has shipped Media Composer 8.4. The big showcase feature is custom frame sizes which takes Avid even closer to resolution independence then it was before. Maximum size is 8192×8192 according to Avid Blogs. There’s a lot of other tweaks in this update but IMHO the best feature additions for craft editors and those working on longform is the addition of a Timeline QuickFind. The Avid Blogs has all the info on this update as well as some short videos showing the features in action. 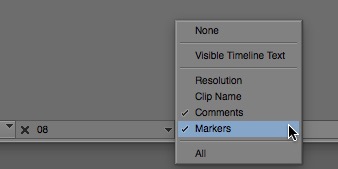 While the regular Find dialogue box in Media Composer has been able to find timeline objects in things like Markers and Clip Names adding this to the timeline itself means one less box to open up.

And since the Timeline Quick Find is also a menu item that means it can be mapped to the keyboard. Check your Avid Application Manager for the update. It wasn’t appearing in mine do I had to log on to the Avid downloads website with my account and grab it there. Its available for those with a current subscription. And if you want a 1600+ page PDF editing guide that Avid has put together then grab that right here.

When Adobe introduced Morph Cut in the newest update to Premiere Pro it was only a matter of time before someone did a comparison to Avid Media Composer’s Fluid Morph since they are designed to do the same thing. Enter the folks at Coffee and Celluloid as they test out both in a side-by-side comparison on a few interview clips.

I was surprised by the result. In my experiences using Fluid Morph over the years (I haven’t had the opportunity to use Morph Cut in anything other than testing) I found that on some cuts it just won’t ever look right. Others you have to tweak the transition duration and possible roll the cut point a frame or two, if that is possible. The comments are kinda funny to click over to the original article and take a look.

I added a video to a @YouTube playlist http://t.co/TzCYwWf5fw How to set up the Portable Vocal Booth Pro

I’ve seen some makeshift recording booths that try to emulate the same thing but these products from Editors Keys look very easy to assemble and are quite affordable if you have to record a lot of voice overs and can’t get to a real recording booth. There’s several options that range in price from $100 up to $300 for a package with a stand. Beats recording vo in your closet or your car.