Some cost, some are free but they are all useful in one way or another

It’s been awhile since we’ve visited the Useful Tools for Editors series so in honor of our Nashville Predators making it to the NHL  Stanley Cup Finals here’s a new batch of software, hardware, books, tweets and tips for editors everywhere. Go Preds!

Art of the Cut book 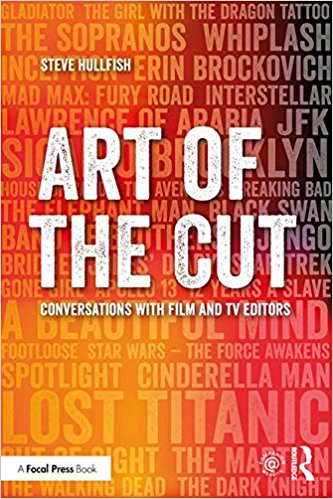 Most people reading this column have probably been following Steve Hullfish’s long running ART OF THE CUT series here on PVC. It is by far the most expansive and in-depth interview series with the biggest names working in editorial in Hollywood today. While Steve’s series has published on PVC for quite some time you may not know that he recently published a printed, paperback version of Art of the Cut:Conversations with Film and TV Editors.

I’m sure the first question asked is: Why would I every buy a dead tree version of this book when I can read them all online for free? For me there is still the pleasure of curling up with a good book and as an editor I learn something every time I read something like Art of the Cut. After a long day of editing I just don’t like to stare at more screens, even a Kindle (though a Kindle isn’t as bad as an iPad.) But the best thing about the book is that the interviews are organized by topic and not just by interview subject. I think this approach takes the linear approach to reading a book out the window as you can browse the table of contents and go to a section that is of interest. Since Steve is an editor first and foremost he does a great job interviewing his subjects and has worked very hard on the curation of hundreds of hours or interviews. Amazon is currently listing the book at $36.26 so click on over and get your own copy.

I really love how the printed version of @stevehullfish ART OF THE CUT book divides the interviews by topic.

God bless Avid and their attempts at making Media Composer easier to install and work with but one downside of a modern Avid install is that both the background services and the Avid Application Manager seem to run all the time. While you can just quit the background processes the App Manager continues with a helper process that runs even after quitting (this is on a Mac, I’m unsure how this works on a PC). Yes you can force quit via the Activity Monitor or you can download the AvidAppManagerCloser thingy that will do it for you.

This little Automator script comes courtesy of the must-read Avid related blog 24p. Click on over there, give it a read and download it if you need it.

Many of us know and love and use Post Haste from Digital Rebellion to get us setup with a defined folder structure when we go to work on a new editing job. But editor Adam Schoales wanted to customize things a bit more and he created a Mac Automator workflow called Editing Folders that does just that and is available as a free download. It only asks you to name when you launch it and then creates a series of folders where you specify.

If you want to customize the folders you can open the Editing Folders script in Automator and dig into the shell script a little bit and change those folder names and maybe even add a few more. I didn’t do this but since you can see those folder names in the script I’m guessing it should be easy. But since there’s not support  with this freebie you’re on your own.

If you just want some new, free custom folder icons then head over to Sam Woodhall’s blog and download his 2017 Post Production Icons. Pretty simple in concept but there is a lot of different categories in the sets Sam has created. The clean, modern design is just nice to look at as well.

Each of those folders you see on the left all contain subfolders of varying types to future organize your projects. They are some specific folders icons for Final Cut Pro X and Adobe CC apps but there is enough in there that any media professional will be able to find some stuff to use.

Sam also includes some blank folder png files so I suppose you could take those and make some of your own. One could also dig through all the folders and remove what you don’t want and create a template set that could be duplicated for each new project. I guess that’s sort of like the Automator script above only you don’t run an Automator script. Thanks to Sam for putting these together and you can thank Sam as well (or leave him a donation for these things) on his blog. 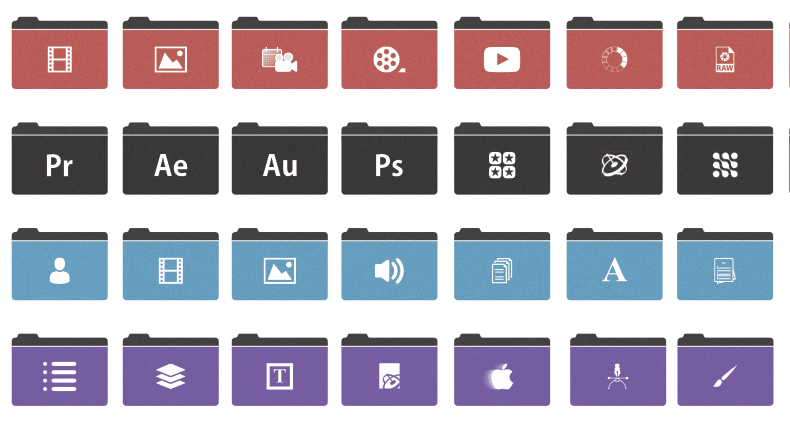 As a freelancer I always keep an eye out for time tracking apps because freelancers track a lot of time. And as one who works in multiple NLEs tracking between the different applications and projects can become tedious. This app called Timing was recently brought to my attention and I can’t wait to try it. It looks to have a lot of different analytics to track many aspects of what you’re working on. Timing also says it will track documents so my first test will be to see if it can latch onto an NLE project or Library and actually track it per job and not just per NLE.

Timing has three difference cost tiers ranging from $29 – $79. It looks like the $49 option is the sweet spot with a lot of useful looking options at that price.

Intelligent Assistance introduced a new app last last year called FindrCat. It’s an interesting little Final Cut Pro X app with a cool idea that kind of reverses that you might think in that it takes your Keywords applied in FCPX and turns them into Finder tags in the Mac OS Finder. Those keywords then travel with the files as metadata meaning they are searchable outside of FCPX. Philip Hodgetts talks a bit more about FindrCat on his blog post after the software’s introduction.

FindrCat is $20 and available on the Mac App Store.

We all know Rampant Design as a creator of great special effects and overlays but they’ve gotten into creating templates for both Adobe Premiere Pro CC and Final Cut Pro X. They create After Effects templates as well but I’m always more interested in cool templates that work directly in the NLE (sorry Avid Media Composer but none for you right now). The PPro templates include things like VHS glitch effects, various promo and lower third designs as well as a slideshow. FCPX templates include some of the same but a few less. And the price is right running at around $20.

Some of these types of things are over the top for most jobs but depending on your need templates like these can save a ton of time if you’re in a pinch or a ton of headaches if you’re not a particularity strong motion graphic designer. And since these are project files you can most likely monkey around with them and do a good bit of customization to fit your need.

It’s always worth catching up with that’s new from FX Factory since the last edition of Useful Tools. There’s a few things I wanted to point out:

I’m always by what Yanobox is doing. Their Nodes tools just blows my mind and now they’re released Mosaic for FCPX, Motion, Premiere Pro and After Effects. I can’t explain it so here’s YAnobox’s description: “Mosaic lets you create a wide range of effects based on real time pixel texturing and adaptive tiling. Mosaic includes several procedural recipes but the most exciting use comes with the import of your own motifs to create amazing graphic effects.”

Or better yet watch the video:

Kevin P. McAuliffe wrote up a little review here on PVC so check that out as well.

A new entry into the noise removal category is VideoDenoise. This $99 option is optimized for OpenCL and CUDA which is a good thing as denoising is not for the small computer.

On the audio side both EchoRemover and AudioDenoise have added some new hosts including Logic Pro, GarangeBand, Davinci Resolve and Adobe Audition. I expect we’ll see more and more plug-ins supporting Resolve in the future. All of these CrumplePop tools are $99 and part of the FX Factory ecosystem. Update your FX Factory install and you can get a free demo of most all FX Factory tools as well as purchase the ones you need.

Red Giant’s subscription effects service Universe has gotten an update to version 2.1. And with version 2.1 we get six new effects:

Universe is also a package that is supporting beyond the usual FCPX/Motion/Premiere Pro/AE as it also supports Magix Vegas Pro, Hitfilm and Davinci Resolve. Universe costs $99 / year or $20 / month.

You can then import that SRT back to your NLE or do whatever you need with it.

At an airport? Need a password for the Wi-Fi? Here you go.https://t.co/dAENL0L3XH

Walter Murch on the Difference Between Sound Editing and Mixing https://t.co/9XjNm14YsQ