Back to My Mac not working for you? Me neither. Until it’s fixed, try this.

I love the idea of Back to My Mac, including with a MobileMe account (there is also a Windows equivalent I haven’t tried). Unfortunately, I have never gotten the green light on both ends of an attempt to link one Mac back to another.

Networking two computers together hasn’t been a big deal for 20 years or so, but taking control of a machine which is part of some network somewhere remote is, you have to admit, a formidable request. The ability to do this was a major reason I re-upped for a MobileMe account, so imagine my disappointment when I could not get that indicator in System Preferences to turn green.

While MobileMe continues to get its act together, there is an alternative. It’s hacky, it crashes, there’s no way to enable it if it’s not already set up when you leave the remote location – but boy, is it ever a sweet option when it works.

The key is iChat and Applescript – and 2 IM accounts. By logging in on the workstation and installing the script, you can make that machine auto-accept requests to share a screen under the Buddies menu. The script makes it so that only your account can successfully make the request.

I find it works about 75-80% of the time; the key is not to let iChat crash on the remote system, and I find I’m getting better at neatly closing the session so I can reopen it later. I have even made iChat a Startup Item so that I don’t forget to have it running when I leave. If I really want to sneak in unnoticed, I use the relatively new “Invisible” status on iChat.

Now let’s give credit where credit is due with this link to the original article detailing how to actually do this. 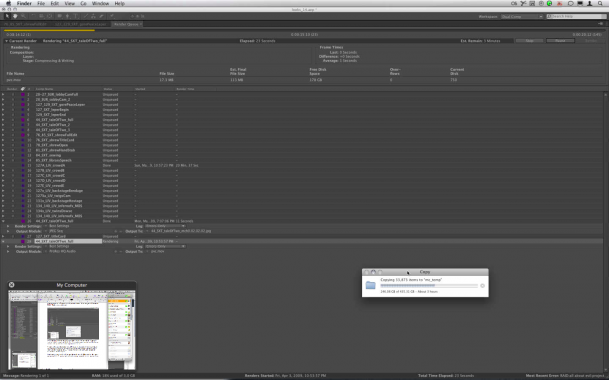 Thanks to Matt Notaro at Kontent Films for this great pick.

UPDATE: Barend Onneweer recommends via Twitter logmein.com – I’ve tested the free version briefly, and it seems potentially more reliable if more sluggish than the above method. It apparently is not only cross platform Mac/Windows, but will even work via iPhone. Interesting.

And Mel Matsouka let me know that Read Pixel makes products specifically to do machine control from another Mac or an iPhone: RemoteTap and SpyMe. I tried these and have the same difficulty as with Back to my Mac getting them to work from a separate network.