A big update adds multicam, manual relinking, broadcast monitoring and the ability to move a project over from FCP7 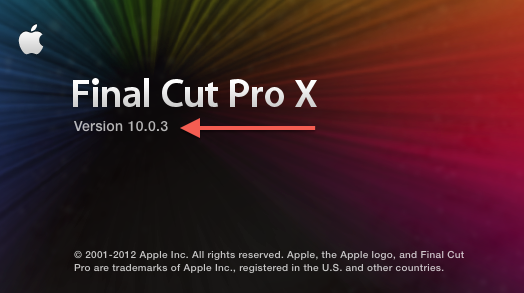 Is it early 2012? It is and Apple has kept its promise with an update that takes Final Cut Pro X to 10.0.3. The promised features are there as well including what looks like an interesting and well thought-out multicam implementation. Broadcast monitoring is there too but it’s labeled as a beta implementation though if the drivers are there it should work. And they said it couldn’t be done but it has been: there’s now a way to easily move a Final Cut Pro 7 project to Final Cut Pro X that’s made possible by an updated XML and a 3rd party software product.

Multicam was promised and Apple has done a pretty good job of making a multicam tool that feels right at home in FCPX. You can combine different codecs, resolutions and frame rates in to a multicam clip which is a step beyond what you could do in FCP7 and what you can do in Avid Media Composer. There’s several different ways to sync including automated audio sync. 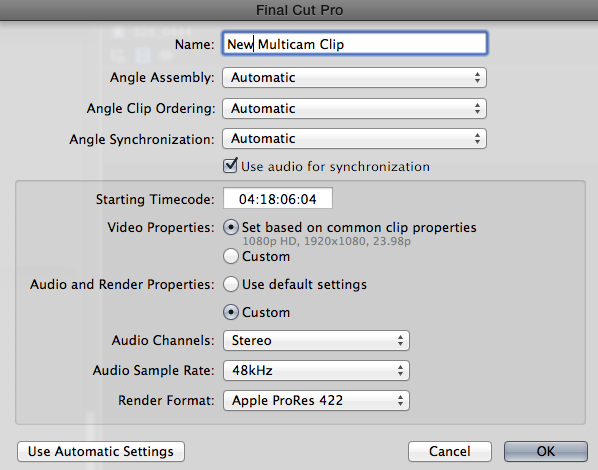 There’s a number of options for setting up a multicam clip in FCPX.

Once multicam clips have been created they can be opened in the Angle Viewer. Think of this Angle Viewer as an automatic sync map where you can then add angles, resync angles, rearrange angles, add effects to angles and basically do whatever tweaking you might need to do to make the multicam clip work.

The Angle Editor looks like a stacked timeline but provides some real power for tweaking the multicam clip.

The Angle Viewer is a slick way to really get a good idea of how well (or how badly) the multicam clip creation was. It helps to clarify one of the more confusing things of multicam editing in general. If you ever tried to add an angle or slip sync in a Final Cut Pro 7 multiclip then know how painful that was. The FCPX implementation makes it much easier.

Once your multicam clip has been created it’s then easy to edit using the new Angle Editor. Just choose Angle Editor (or hit command + shift + 7) from the Window menu and then …… holy !$#@@$#% look what just popped up! It’s a dedicated Viewer!! 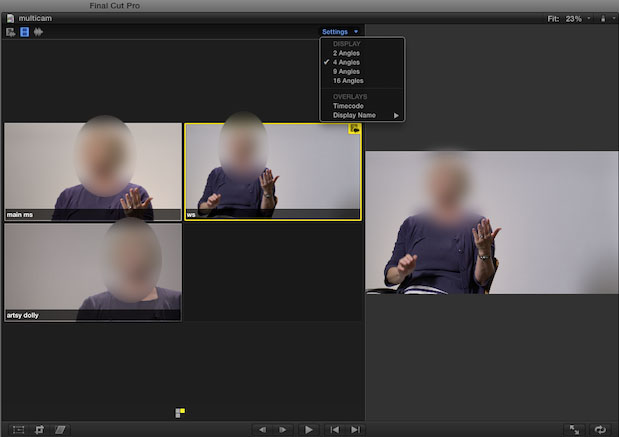 Angle splits range from 2 angles to 16 angles. Up to 64 angles can go into a clip and you can swap between the different banks of camera angles.

I won’t rehash the philosophical debate about the need for two viewing windows in an NLE but suffice it to say it’s really necessary to see a dedicated viewing window of some sort when multicam editing. The real kicker comes when you aren’t in a multicam clip and you have the Angle Viewer open. 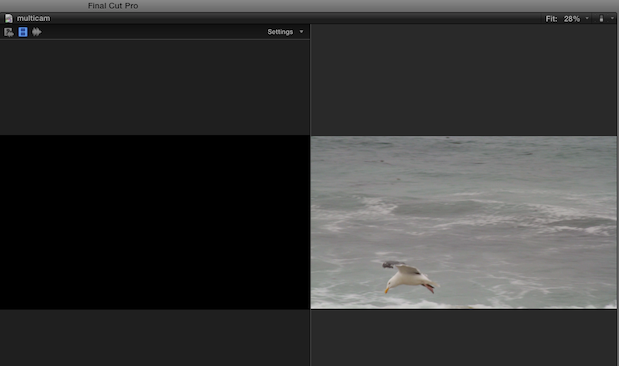 I’ll agree with @pauldv on that one.

I hope that the day might come when we can load any clip into that rather lonely looking Angle Viewer.

There’s really a lot to learn about FCPX multicam and the couple of hours I spent playing with it I feel like I’ve at least scratched the surface. It does appear you can do some nice music video style editing with some of the multiclip like functionality we enjoyed in FCP7. In fact an FCPX multicam clip is pretty much the same thing as an FCP7 multiclip. This is a good thing as I was worried the idea of a multiclip was out the window.

One thing I don’t understand is why FCPX can perfectly sync a few angles I’ve been testing via the Synchronzie Clips command but can’t via the Multicam Clip command. Exploring still needs to be done so we’ll report back later.

Broadcast monitoring was promised and it’s here albeit in a “beta” version. This support is dependent on drivers from third party hardware makers like AJA, Matrox and Blackmagic Design and there’s no doubt that they will be updating their hardware to work with FCPX. AJA is the first to have announced drivers. Broadcast monitoring was a deal breaker for many when it came to FCPX (it was for me at least on many jobs) and no matter what a fishing show might tell you the hack to get the previous FCPX out to a broadcast monitor just wasn’t a workable solution for most folks. 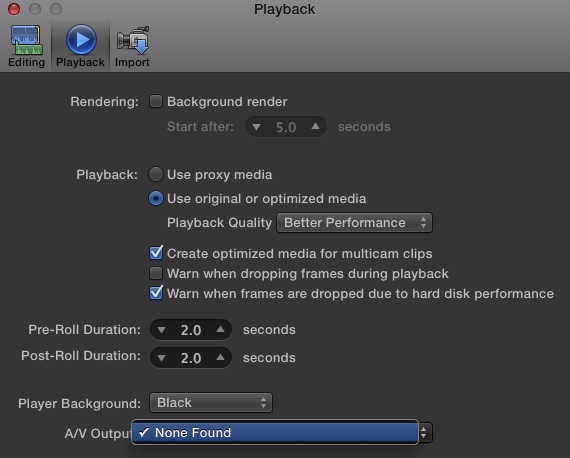 If you have proper drivers installed they’ll show up here in the preferences. 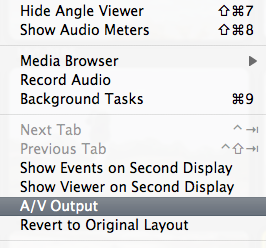 And this new option under the Window menu will get that signal out to your monitor. And while we’re here why not another menu option to just show Show Event Clips in Angle Viewer. Just like that we have a two-up Viewer/Canvas type display!!

Some 3rd party plug-ins are new.

3rd party options also get special recognition with this update and that includes (finally) Magic Bullet Looks which fixes the bug that wouldn’t allow Looks to work before 10.0.3. Red Giant seems to be celebrating this release as they have Magic Bullet Looks on sale for the next 7 days for $199. Check out their site for more details. 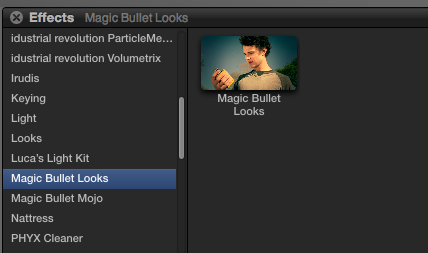 Don’t get the built-in Looks effect confused with Magic Bullet Looks as you’ll be very disappointed. 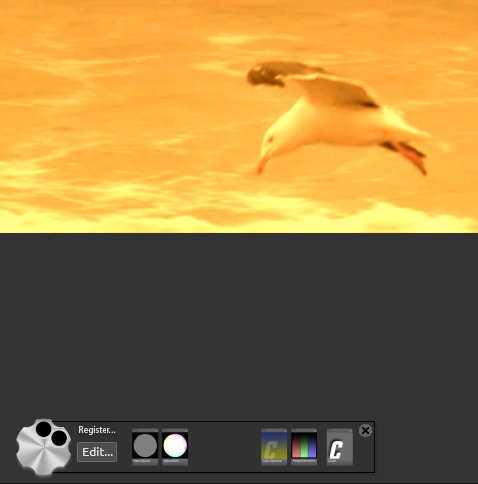 GenArts has also gotten Sapphire Edge to FCPX. There had been a beta floating around for a while but 10.0.3 makes it official. Now we’ll have to see if the full Sapphire package makes its way to FCPX.

We can finally move a project from FCP7 to FCPX

There’s quite a lot of stuff that will translate from FCP7 to FCPX. Check out even more detail about it here.

Layered Photoshop documents (PSDs) are NOW supported with layers intact. That was a no-brainer as being fixed at some point as any NLE worth their weight has to support layered PSDs. 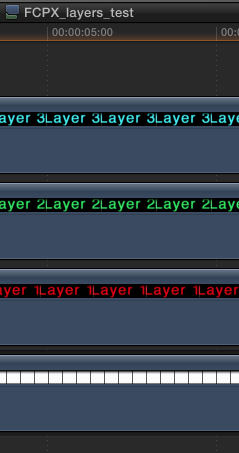 Once the layered PSD is imported you can then work with the layers as if it was a Compound Clip, animating each later individually.

One of the most requested features is now a reality with the ability to manually relink and reconnect clips. With FCPXs new, advanced media management capabilities manual relinking shouldn’t, in theory, be needed but sometimes it is. This was a very needed feature as that new way of managing media meant if something went offline it was often impossible to get it back online. 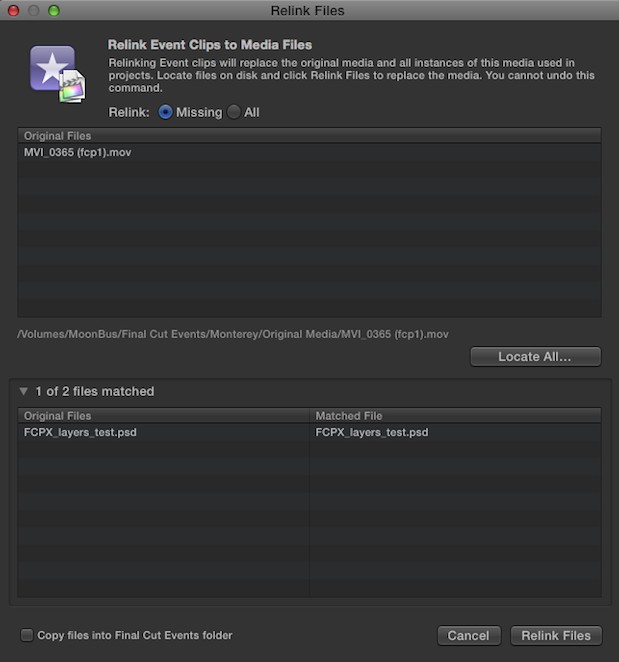 Bring up the Relink Files dialog box by choosing Relink Media from under the file menu. You can see above that one image has been found for relinking.

Chroma keying has been upgraded and should pull a better key with tidier edges than before. Apply the Key effect and you’ll see a lot of new controls from under the Inspector. 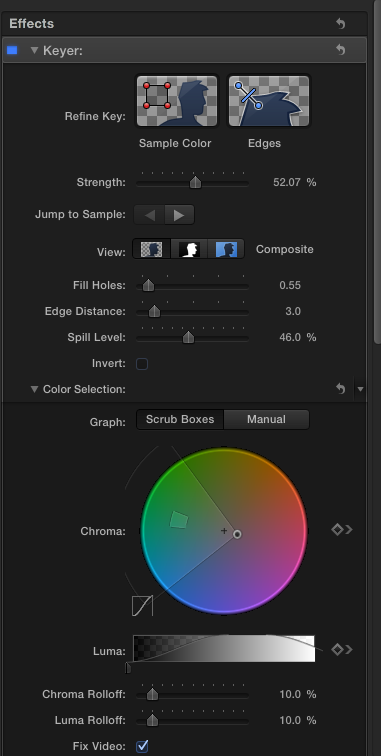 3rd party keyers might not be needed anymore with FCPX’s new built-in keyer.

Overall this is a solid release that continues to add in features that FCPX had to have if they want to gain back some of that “pro” market that has been lost. Features are one thing but FCPX still has a different overall editing design than FCP7 did and that’s something that will keep many FCP7 users away. That’s okay with Apple though as they are gaining a lot of people who have never edited a frame of video before. As always Larry Jordan was first up with a good list of all the new features so continue reading there for even more information on 10.0.3. Have all 70 of these feature requests been addressed? No but it’s a start!

We’ll be kicking the tires more over the next week.