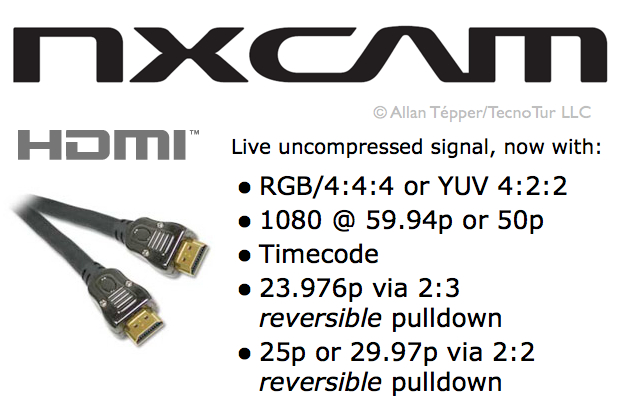 Sony’s latest NXCAM cameras fortunately feature unprecedented new features with their live HDMI outputs, including uncompressed 1080p at 50p or 59.94p, timecode, and even RGB 4:4:4 capabilities as an alternative to the standard YUV 4:2:2 modes. They also offer special pulldown modes for 23.976p (2:3), 25p (2:2), or 29.97p (2:2) (model dependent) with flags to help an external recorder reverse-telecine and recover the original, pure progressive signal. This is great for those of us that -for certain projects- want to record an even better signal than what’s possible inside of the camera with AVCHD. However, today’s external HDMI recorders don’t yet support these new features. This article is about which NXCAM models include these new features, more details about them, and the response from each external recorder manufacturer about the likelihood of supporting these features, either in their current -or future- models. We’ll also explore which new NXCAMs say farewell to 29.97p.

Three new NXCAMs which have the unique HDMI features

The following are new to the Sony NXCAM family, were shown at NAB 2011, and join the first NXCAM, the HXR-NX5, which were covered here in ProVideo Coalition by Adam Wilt and myself.

Both the NX70 and NX3D1 say goodbye to our familiar 29.97p. If you expect your footage shot with these two NXCAMs to be distributed on an AppleTV, iPad, iPhone, or iPod Touch, then shoot your “normal” shots at 23.976p or 25p, and use 50p or 59.94p exclusively for your slow-motion shots, as I explained in my article Why the iPad will dictate your shooting framerate & shutter speed. If you are shooting with the original HXR-NX5 or the new NEX-FS100 (USA-segregated versions or WorldCam versions), then you still have the option of shooting 29.97p. 4th UPDATE (December 26, 2011): The NX70 will receive it’s missing 29.97p framerate via a free firmware update at the beginning of 2012. Click here for details.

As of publication time of this article, here are the responses I’ve received.

AJA (KiPro or KiPro Mini):
“AJA has a close relationship with SONY, working closely with the company to support their products. AJA therefore plans on providing support for the newest Sony NXCAM camcorders.” However, AJA would not yet specify when this will come, or whether it will come in a new product, or in a firmware upgrade or retrofit for the current KiPro or KiPro Mini. I’ll update this as I receive more details from AJA.

Atomos (Ninja/Samurai):
No response as of publication time. I’ll update if and when they respond.

Convergent Design:
No response as of publication time. I’ll update if and when they respond.

Blackmagic Design (HyperDecks):
No response as of publication time. I’ll update if and when they respond.

SoundDevices (PIX 220/240):
SoundDevices responded that none of their current product supports 1080/50p or 1080/59.94p or RGB over HDMI. Regarding timecode over HDMI: “Until we thoroughly test this, no time code is supported over HDMI, only over SDI. PIX recorders can support this with a firmware update if/when we receive thorough documentation from Sony.” Regarding which current products (if any) will be able to detect the pulldown flags, execute inverse telecine, and create a native 23.976p, 25p, or 29.97p ProRes recording after a firmware upgrade or retrofit, the response was both the PIX 220 and PIX 240.

In order to help the external 4:2:2 (and potentially 4:4:4) recorder manufacturers determine which of these features are most important to you when recording from an NXCAM or other camera that may reach the market with some or all of these features, feel free to comment below to place your “vote”. I am sure that they’ll be reading both this article and your “votes” in the comments.

Since I know we have an international audience and we are living in the global village (thanks Marshal McLuhan!), I am constantly researching the possible variants among model numbers in the international marketplace. Often, video equipment manufacturers restrict certain functionality in regional versions, and sometimes they use a strict regional warranty system. Sometimes the manufacturers do this to avoid grey marketing (i.e. to encourage purchasing of products in a local region, to protect local distribution), and sometimes it’s to avoid extremely high import tariffs in a specific market. When they do this, the manufacturers often add a regional suffix to the model number.