If you read my previous article on Unreal Engine and Unreal Engine 5, you’ll know that I’ve loved 3D for a long time, but no matter what I’ve tried, I’ve never been able to quite grasp it, and I have never really known why.  That is until recently.  Unreal Engine has given me a new “perspective” on 3D animation, and 3D in general and all it took was a simple mannequin.  I know that might sound odd, but this mannequin changed the way I look at all my 3D work, and I’ll talk a little about how in this article.

So, before we talk about perspective, it’s important to first look at what happens when you start an Unreal project.  As you can see from the image below, Unreal Engine’s Project Browser is broken down into project creation sections, based on the type of work you’re doing.  Games is obviously first on the list, and we’re going to be borrowing from a gaming project, but for me, I normally just start out with a blank project from the Film/Video & Events section.  You’ll see that there are Blank, Virtual Production, DMX, InCameraVFX and nDisplay to choose from. 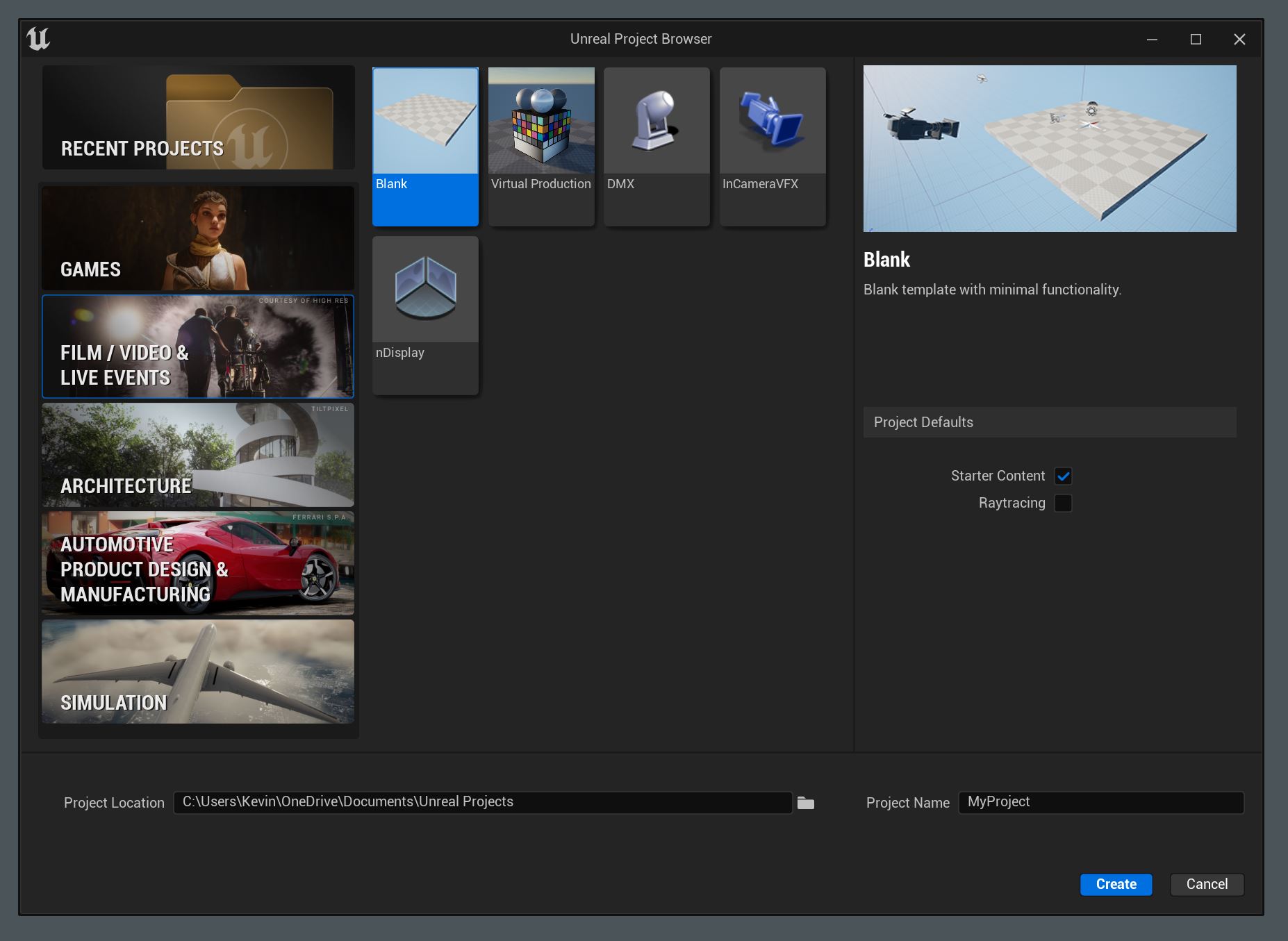 Now, all we have to do is confirm the project location, and whether we want Starter Content and Ray Tracing included.  I normally choose both, give my new project a name, and hit create.  Then, I’m greeted by the void that is a blank project. 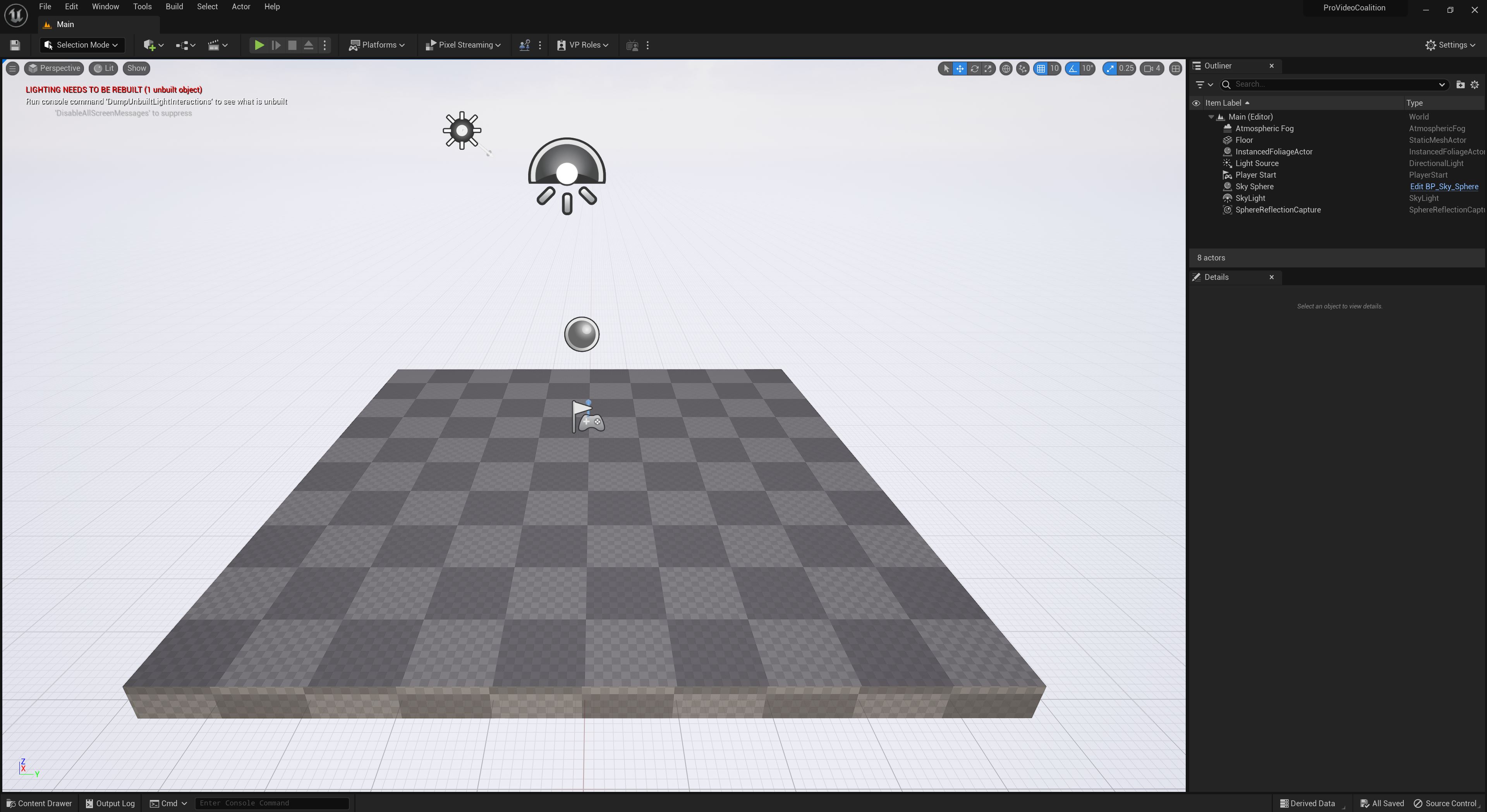 But where things get interesting is that if you change the perspective in the project, and point up in the sky, you’ll notice something very interesting.  A super realistic sky that is moving, and looks, well, “life-like”.  I didn’t have to add it, it was there by default. 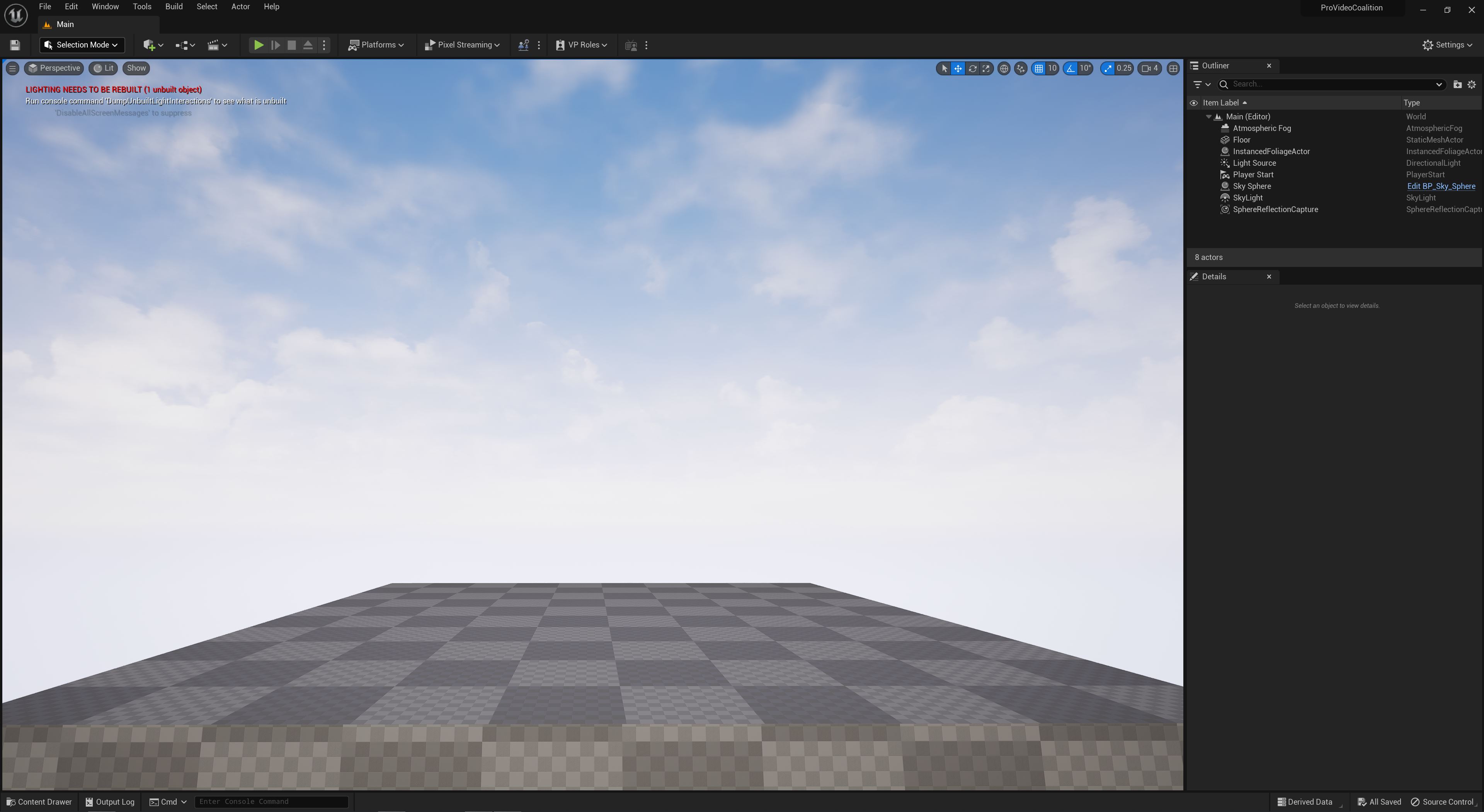 Now, with all of that said, the only thing that currently lives in my environment is a square platform.  Nothing really that great, that’s going to give me a new perspective on anything.  So let’s throw something in to see if we can start to get a grip on me, and the world that I might want to start building.  Since we added the starter content, let’s use something from it.  I’m going to call up the Content Drawer by hitting “CTL+SPACE” (CMD+SPACE if you’re on a Mac), and once I do, I’m going to head into CONTENT>StarterContent>PROPS, and I’m going to simply drag and drop a chair into my scene. 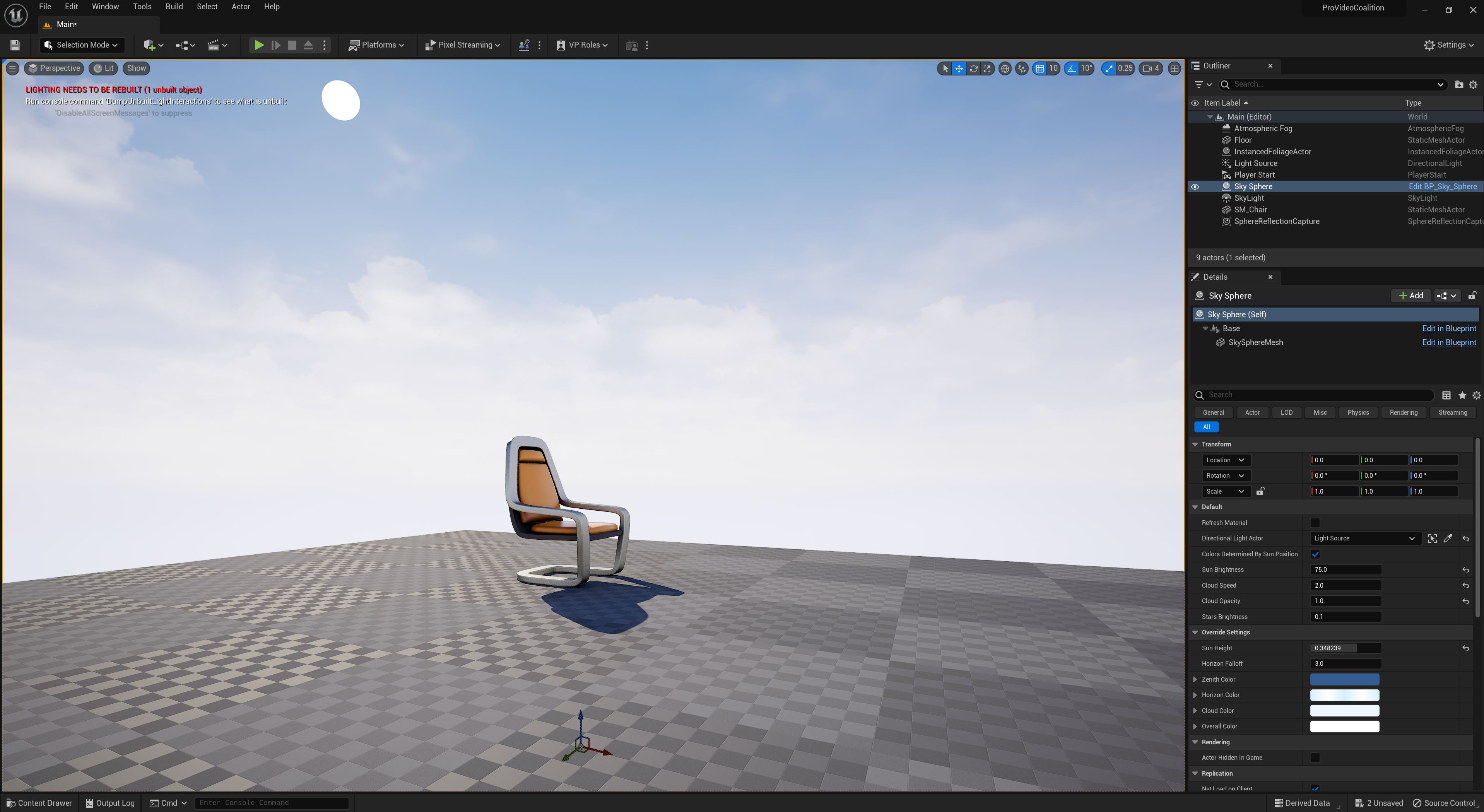 Now again, you’ll notice that without any additional work, the proper shadow perspective has been added, without any additional work by me.  Now, the chair is cool and all, but the problem with it, is that there really is no way to judge how big the chair should really be, much like in any 3D application.  Should it be huge, as the characters I’m going to add might be big, or should it be smaller.  I have no point of reference.  That’s where my friend the mannequin comes into play.  What I’m going to do is stop thinking like I’m creating a 3D scene, and start thinking that I’m playing a video game.  What does every video game have?  A protagonist.  Whether it’s first person or third person, the perspective of the world revolves around that character and their height in the world.  Once I’ve established that, the entire world can fall into place around them.  But, the big question is, how do I get that character….that mannequin?  Well, that’s where the gaming aspect of Unreal Engine comes into play.  Before we do that, though, I think we need something to gives us a better look at our world.  Let’s add a tree to our environment.  I’m going to use one from the MW Conifer Tree Forest Biome content pack, that I believe was free when I added it to my Epic account. 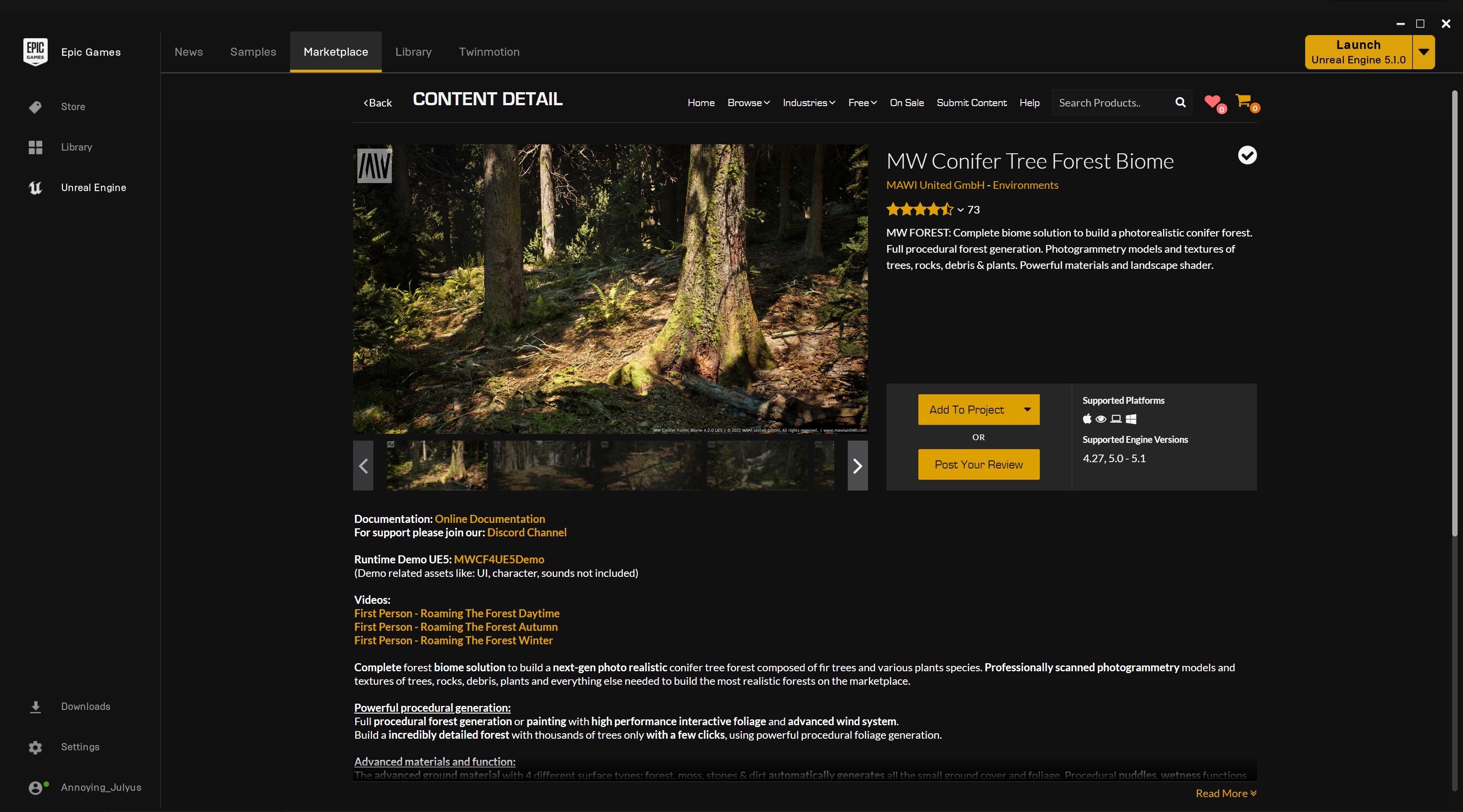 To add it to the project we’re working on, all we have to do it hit “Add to Project” on the Content Details window.  We’ll be asked which project we want to add it to (I’ll be adding it to our PVC project), and once it downloads, it will now be in our project. (To give you an idea, this pack is just over 4G big, and lets you create environments like this…..) 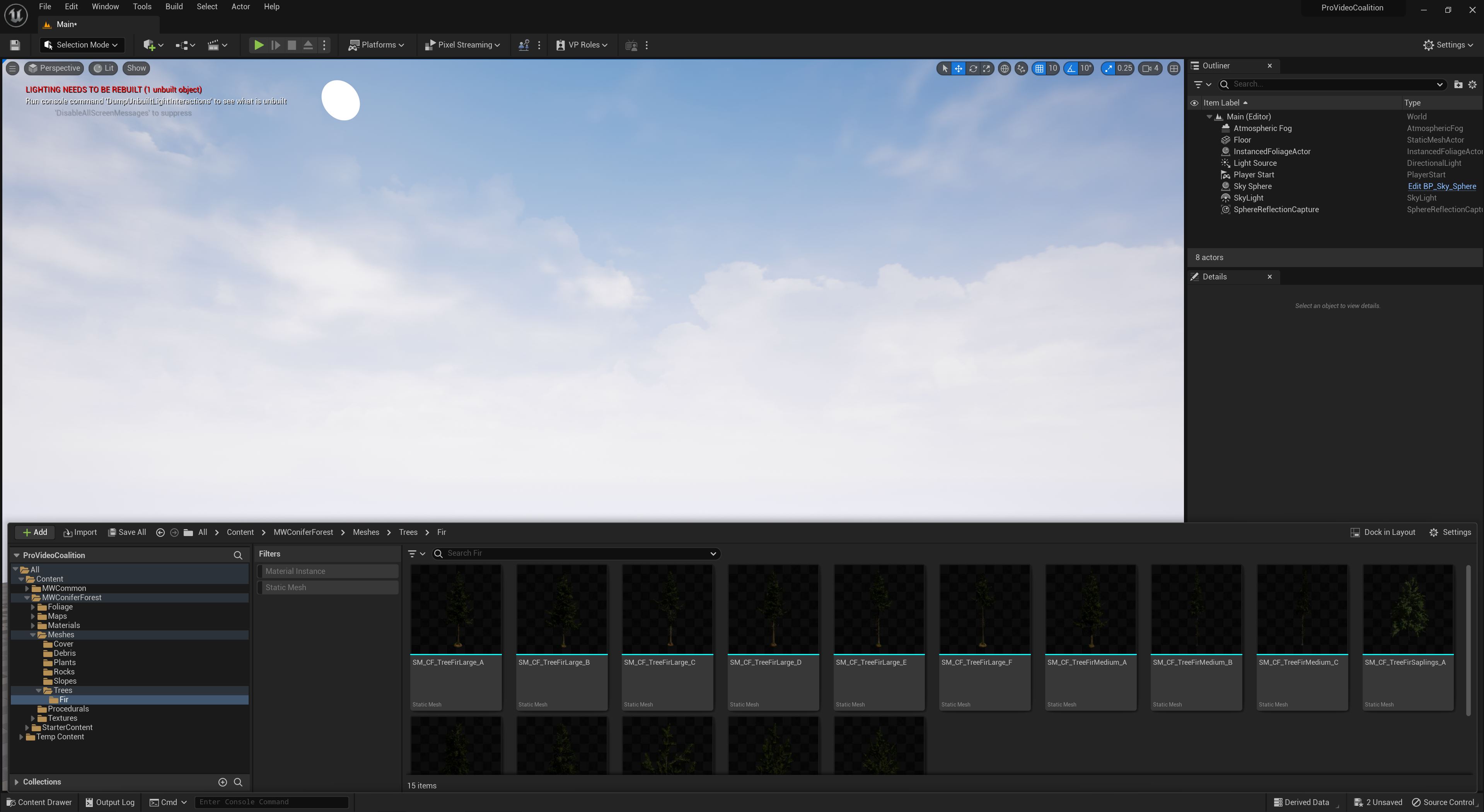 Now, the trees are a bit hard to see in the above image, but they’re named “Seedling”, “Sapling”, “Medium” and “Large”.  Not too great, when it comes to how these trees are supposed to fit in my world, perspective wise.  So, let’s add a tree, and then we’ll talk about our mannequin giving us our “new perspective”.  To add a Mesh, simply drag and drop it from the Content Browser, into your environment. 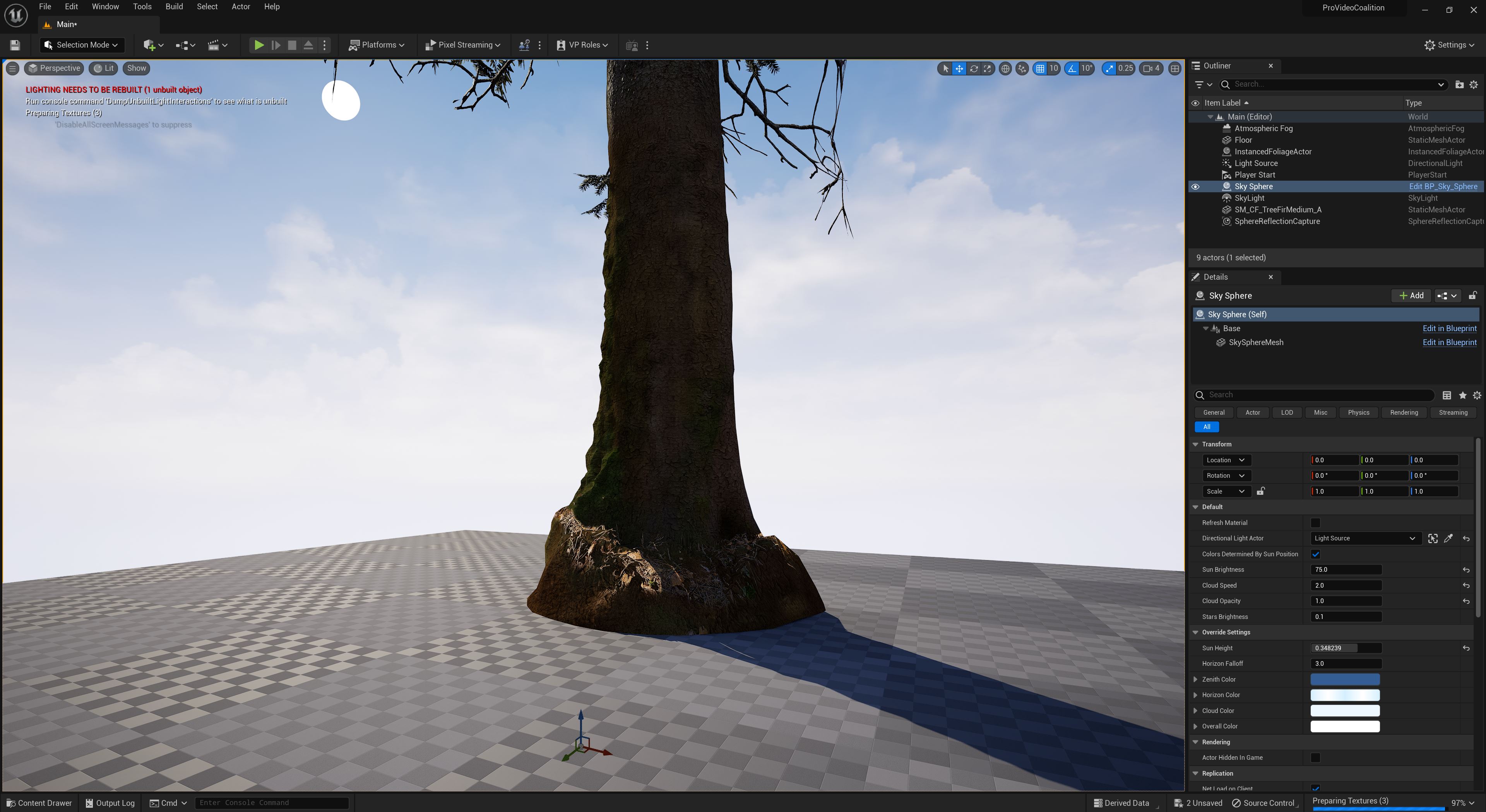 Needless to say, my perspective is now thrown off even more, as our “Medium” tree is apparently HUGE in my environment, which means I’m super small…..or maybe it’s the correct size, and I haven’t zoomed out far enough to see it properly.  See where the conundrum comes in?  Ok, let’s get our mannequin in our scene to give us a better idea of the world we’re actually building.  To do this, we’re going back to the Content Browser again, and this time we’re going to “Add” some content, and we’re going to be “adding” a “Feature or Content Pack”. 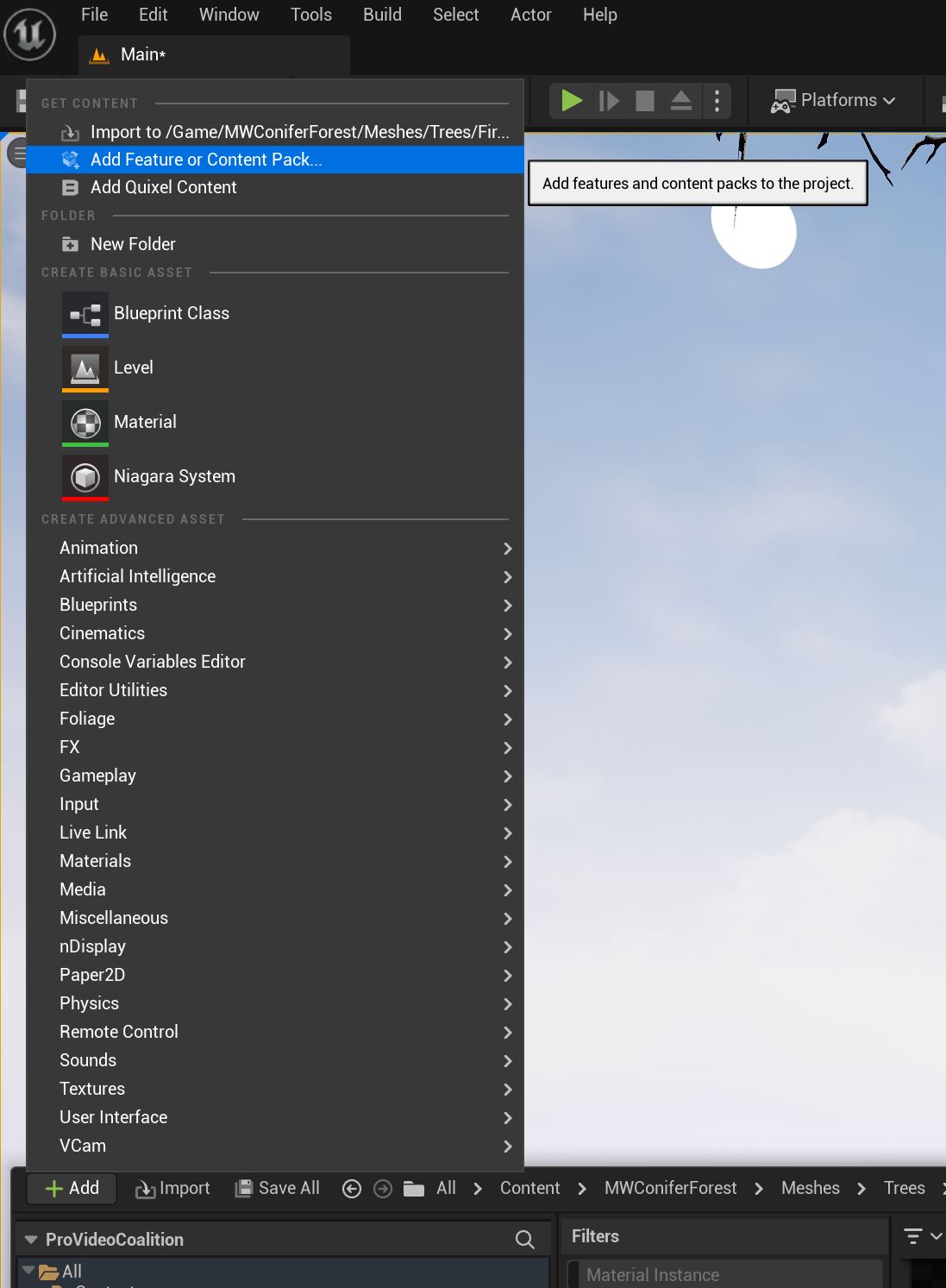 Once I select that, you’ll see this screen appear. 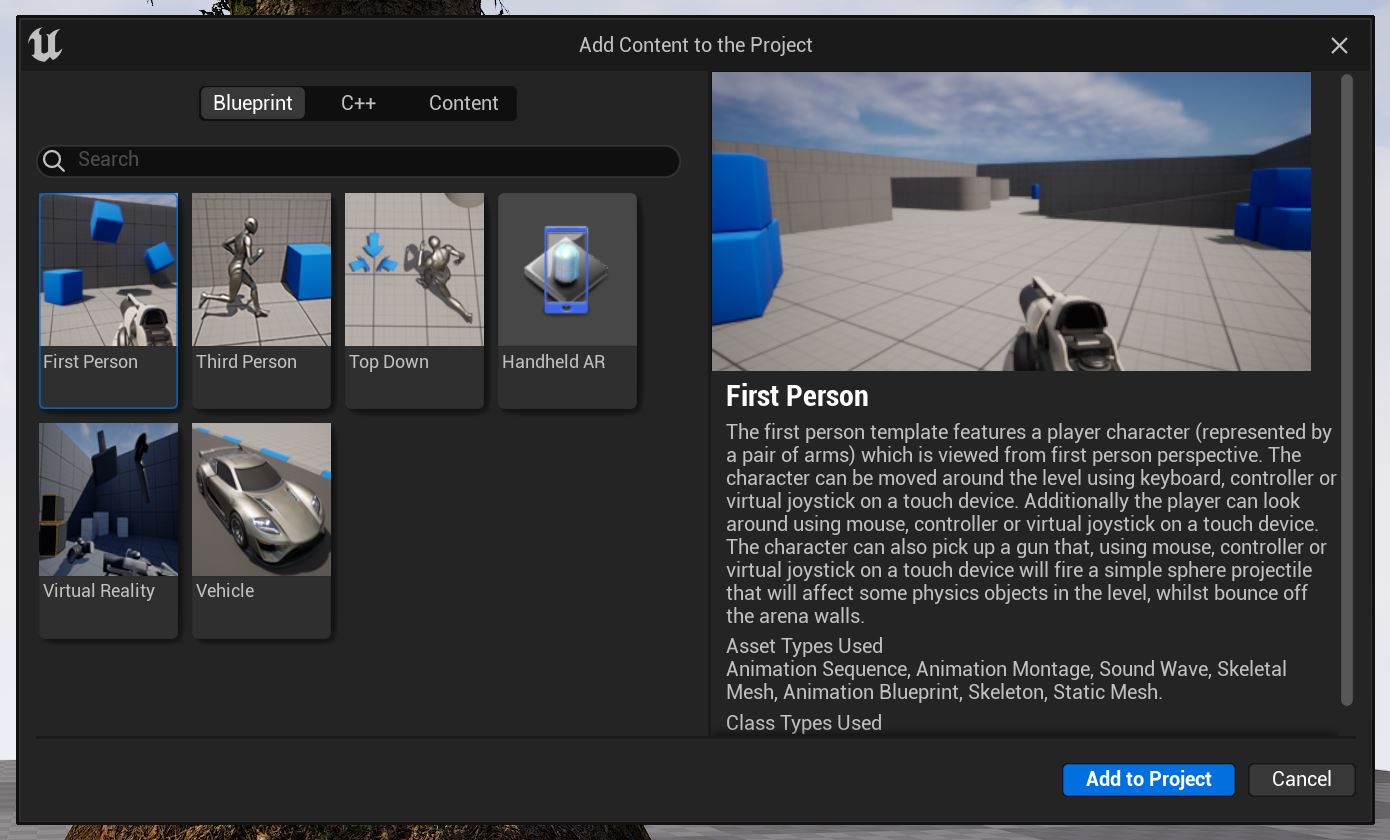 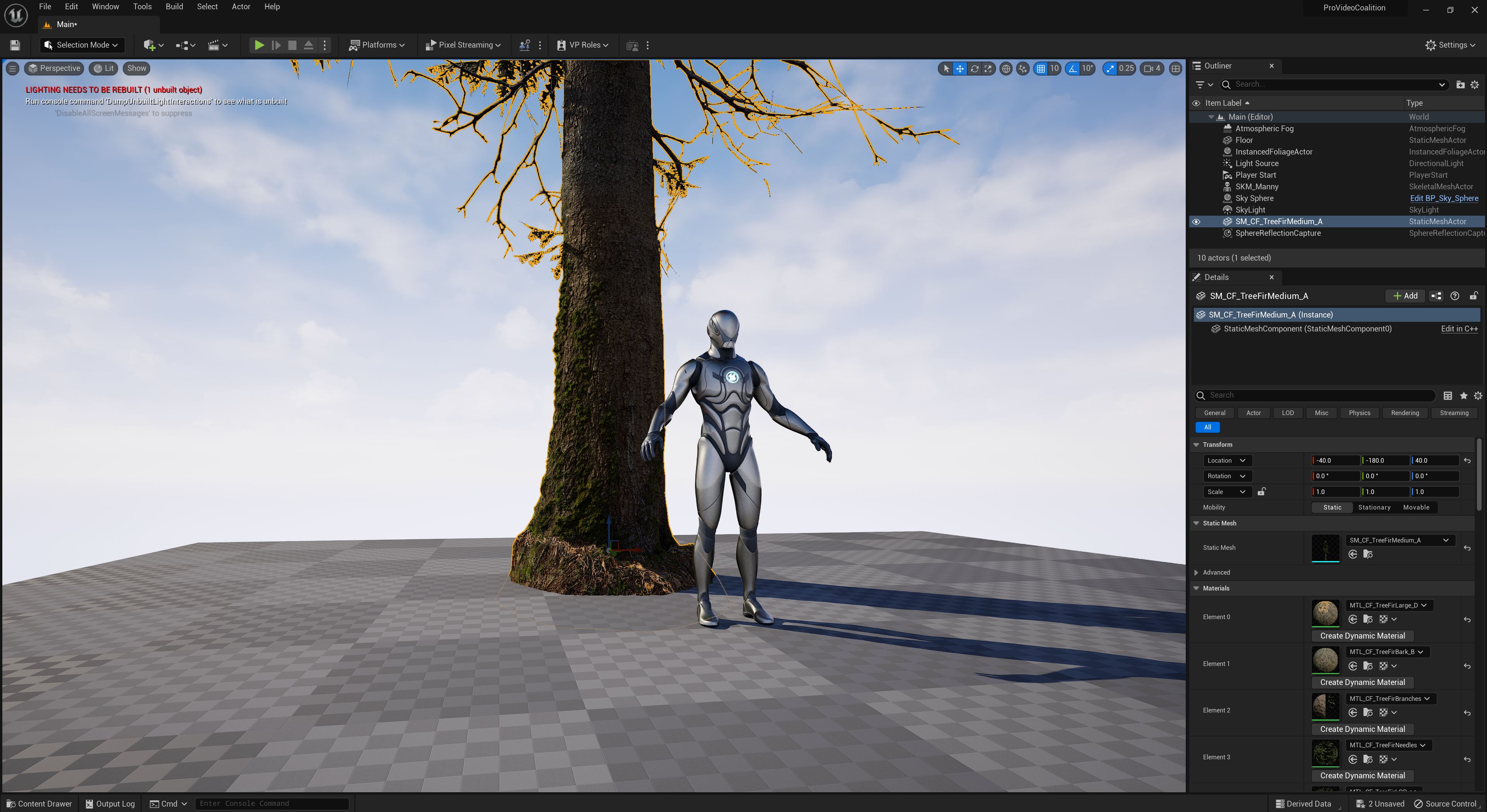 Once I had done this for the first time, it’s like a light switch flicked in my brain.  This character from a third-person perspective game has given me a new perspective on my scene and the environment I’m building.  If I drag one of each of the other trees into this shot, now I can really get an excellent idea of not only which trees might work best in the area that my character is in (whether it’s first person perspective or not), but it also lets me easily resize other elements that could potentially be in my scene (steps, doorways, chairs, etc) to the correct size, to that nothing looks out of place, and everything has the right, well, perspective. 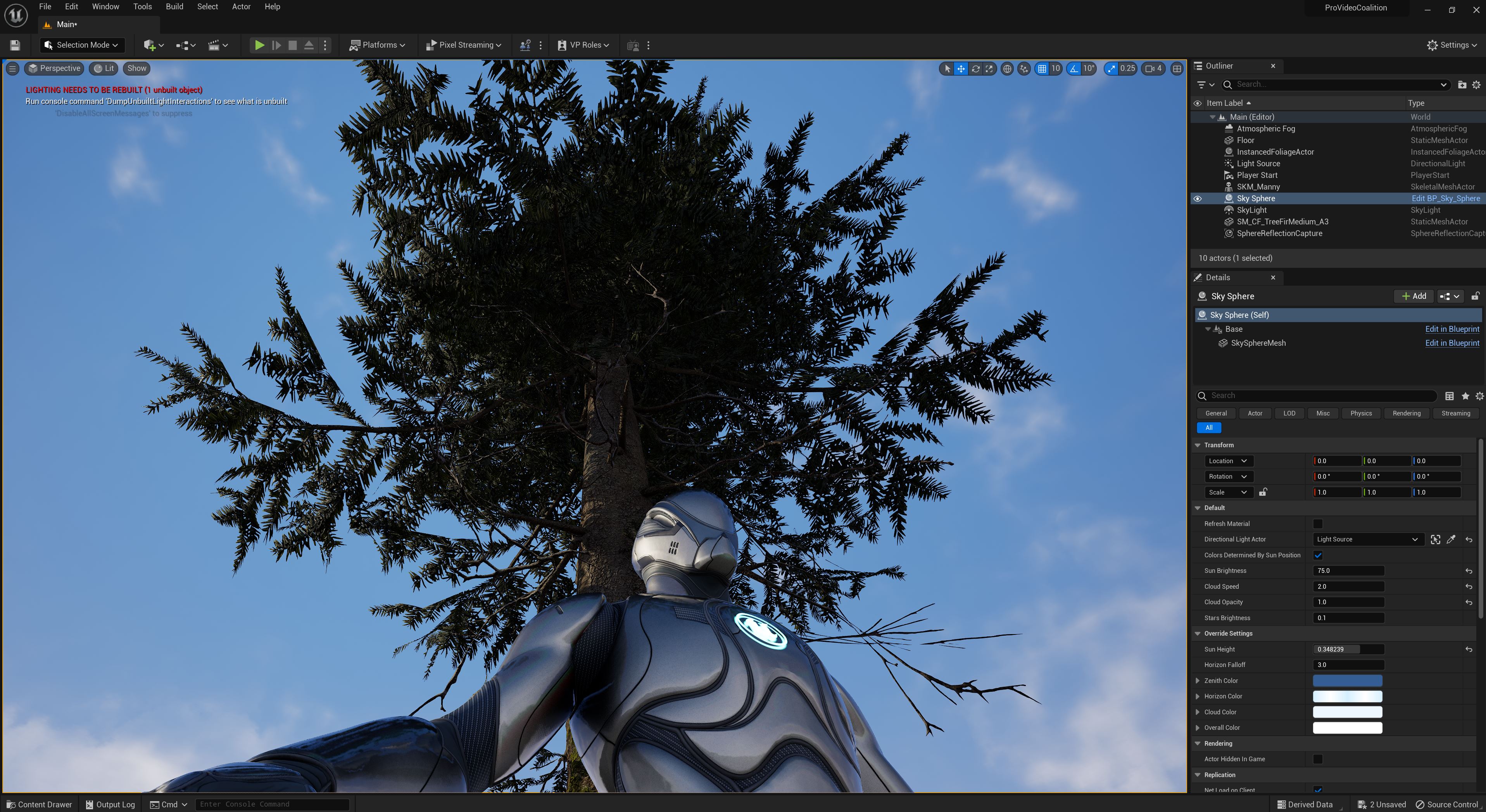 This one mannequin has completely changed the way I look at my 3D work, and the more and more that I dive deeper into Unreal Engine 5, the more that I see that not only it is easily one of the easiest 3D applications to learn, it also has one of the best communities with elements out there for just about every project you could work on.