Epic Games announces the release of Unreal Engine 4.27, which introduces powerful new features for creators across game development, film and television, architecture, automotive, and beyond. 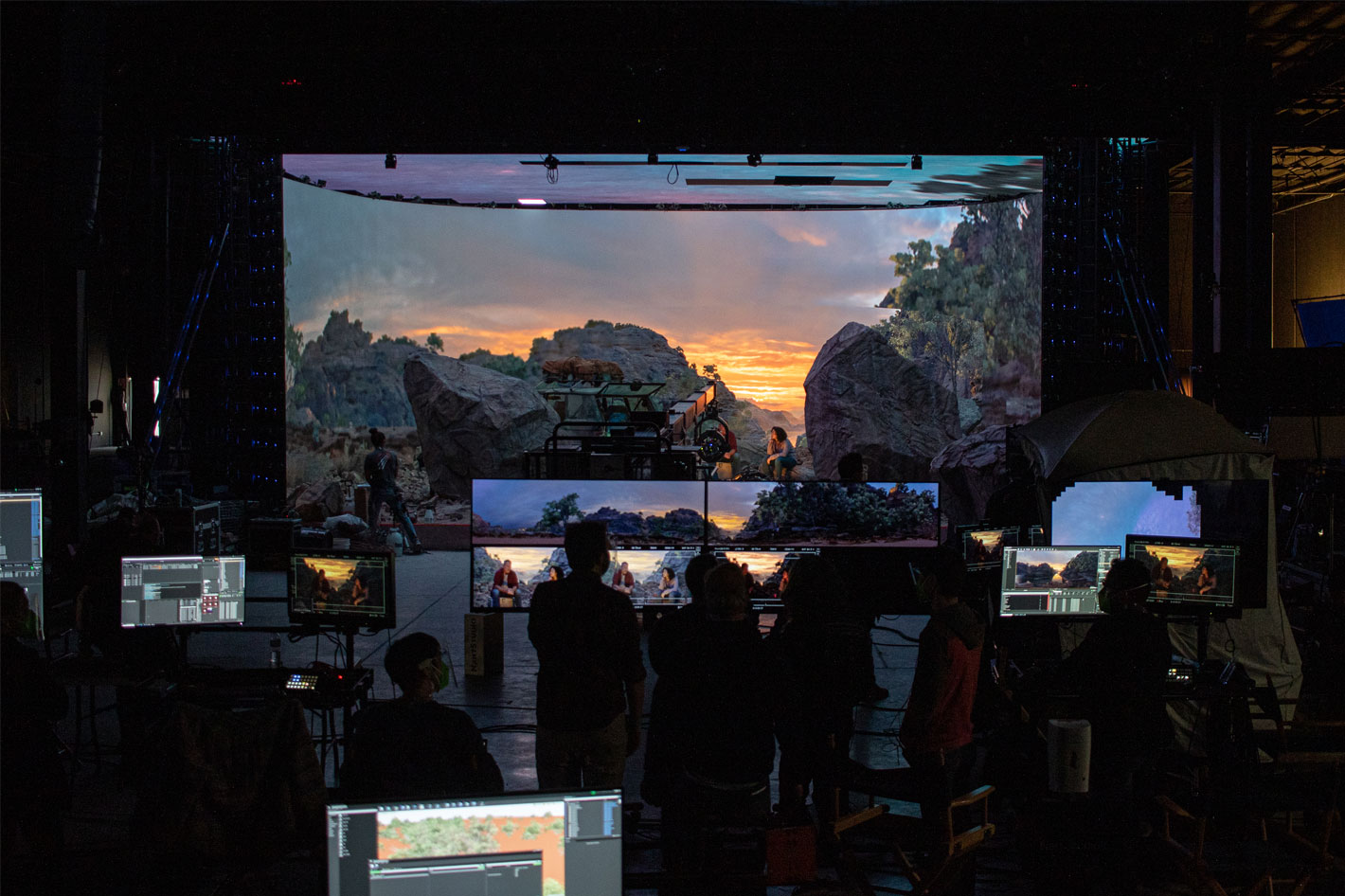 While some of the features now introduced in Unreal Engine 4.27 are in Beta and should not be considered production-ready (see the release notes for more details) the version now released reveals powerful new features for creators that will making it faster and easier to use the game engine turned tool across a variety of industries, from game development, where it started, to areas as film and television, architecture, automotive, and beyond.

Epic Games recently teamed up with filmmakers’ collective Bullitt to show how the Unreal Engine’s in-camera visual effects (ICVFX) toolset can be used in the real-world, by making a short test piece and putting the latest production workflow through its paces. When ProVideo Coalition covered the news, we shared the info from Epic Games that a free sample project would be available for users to try their hand at the tools. That free sample project is now available for the community to download. 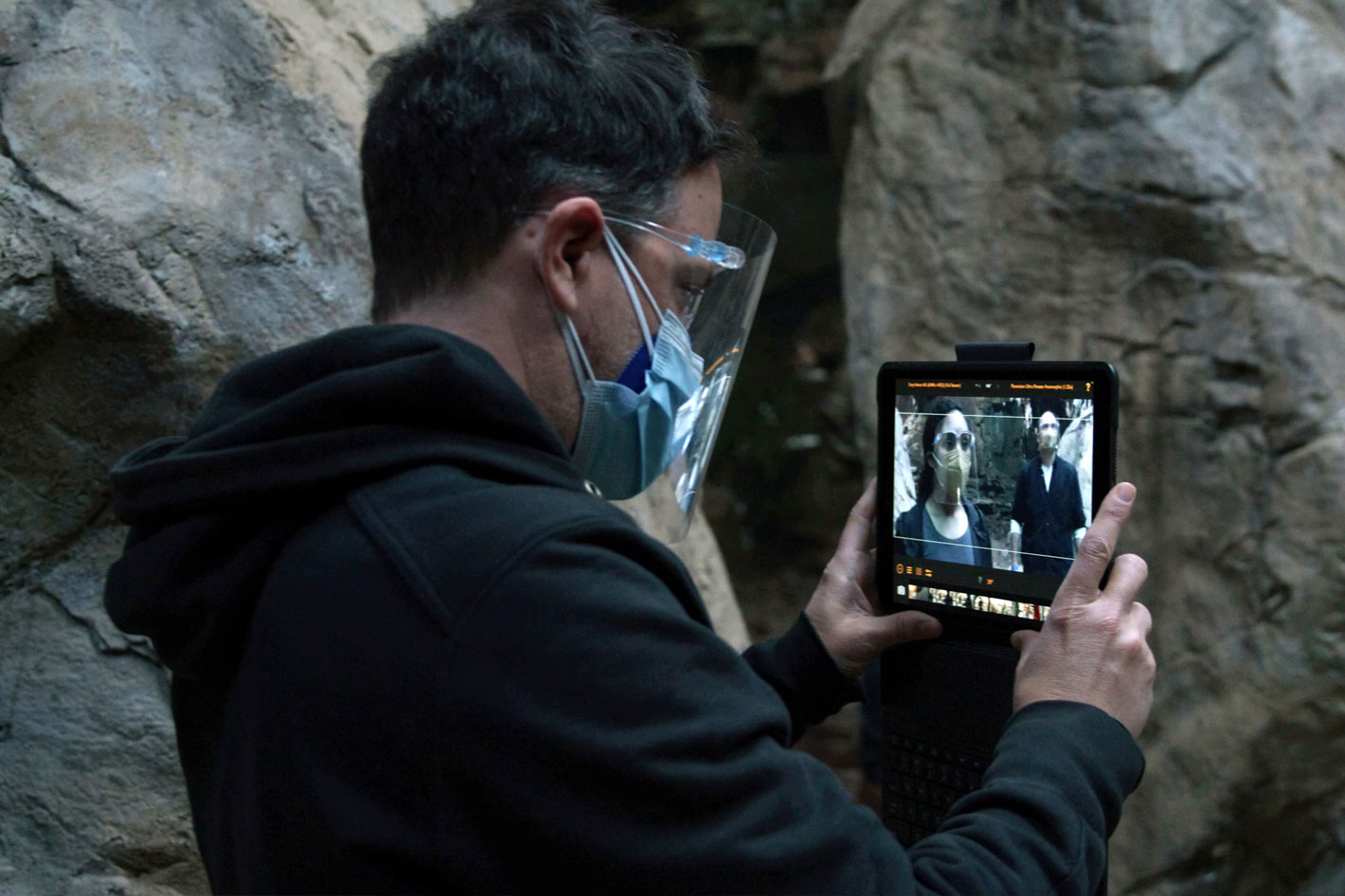 Now, with Unreal Engine 4.27 released, it is possible to explore the improved in-camera VFX workflows. This release introduces a slew of improvements to the efficiency, quality, and ease of use of Unreal Engine’s in-camera visual effects (ICVFX) toolset, making it faster and easier than ever to utilize this revolutionary virtual production technique that is changing the face of filmmaking.

With the new 3D Config Editor in 4.27, users can more easily design their nDisplay setups for LED volumes or other multi-display rendering applications. All nDisplay-related features and settings are now combined into a single nDisplay Root Actor for easier access, and the addition of multi-GPU support now enables nDisplay to scale more efficiently. Multi-GPU support also enables users to maximize resolution on wide shots by dedicating a GPU for in-camera pixels, and to shoot with multiple cameras, each with its own uniquely tracked frustum. Additionally, 4.27 adds support for OpenColorIO to nDisplay, ensuring accurate color matching of Unreal Engine content to what the physical camera sees on the LED volume.

Also in 4.27, Unreal Engine’s Virtual Camera system has been significantly enhanced, adding support for more features such as Multi-User Editing, and offering a redesigned user experience and an extensible core architecture. Live Link Vcam, a new iOS app, enables users to drive a Cine Camera in-engine using an iPad. There are also improvements for producing correct motion blur in traveling shots, accounting for the physical camera with a moving background. 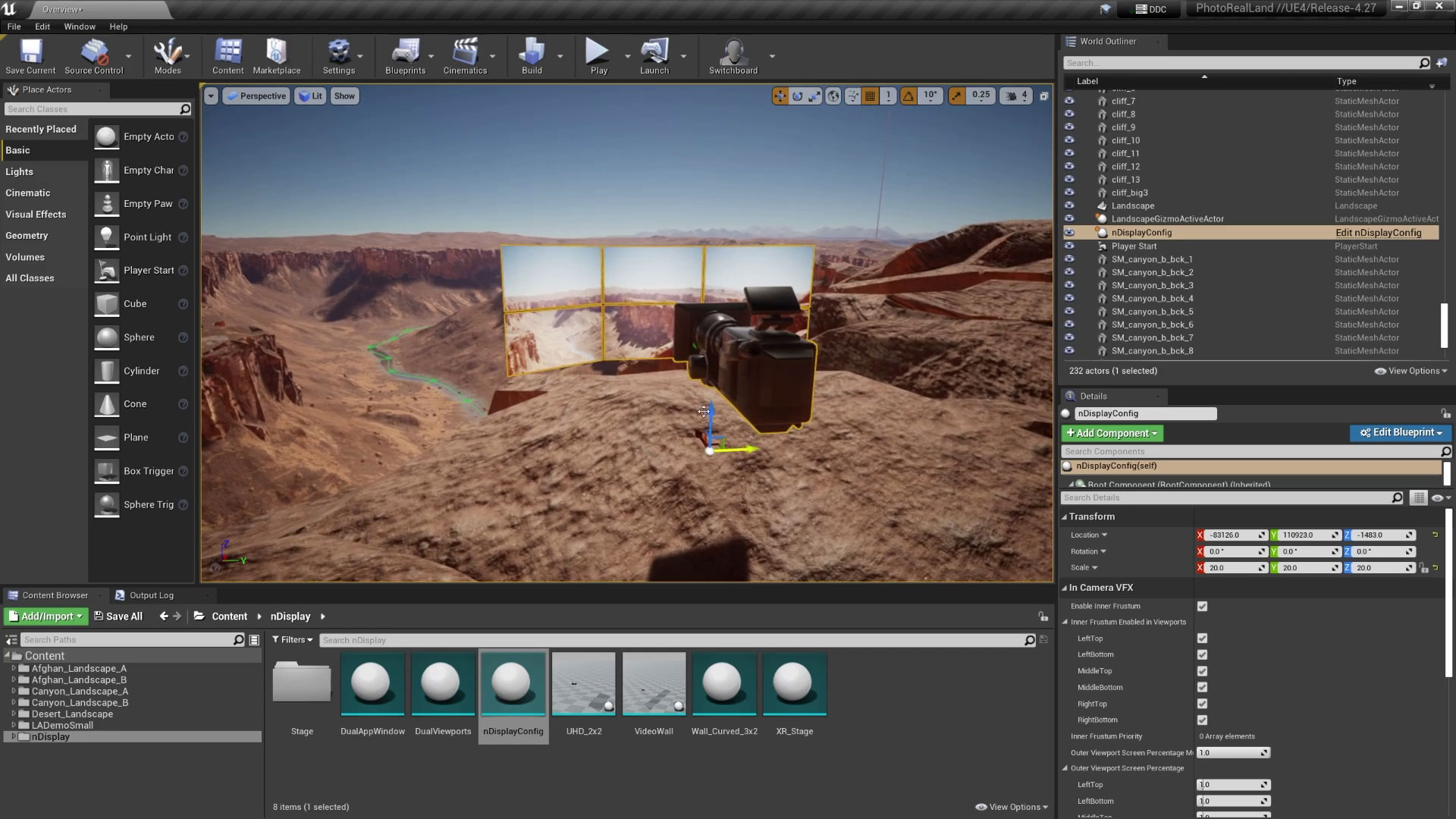 Lastly, new Level Snapshots let users easily save the state of a given scene and later restore any or all of its elements, making it simple to return to a previous setup for pickup shots or for creative iterations.

In addition, says Epic Games, its partners at disguise offer a fully integrated ecosystem of hardware, software, and services for connecting physical stages with virtual sets through their RenderStream infrastructure, which has been updated to take full advantage of 4.27 features.

The series of features included in Unreal Engine 4.27 goes beyond the ICVFX toolset. Here are some highlights of features added, updated or enhanced, as provided by Epic Games:

GPU Lightmass significantly reduces the time it takes to generate lighting data for scenes that require global illumination, soft shadows, and other complex lighting effects that are expensive to render in real time. Since users can see the results progressively, it’s easy to make changes and start over without waiting for the final bake, making for a more interactive workflow.

The Path Tracer is a DXR-accelerated, physically accurate progressive rendering mode in Unreal Engine that can be enabled without requiring any additional setup. In 4.27, a range of improvements make the Path Tracer viable for creating final-pixel imagery comparable to offline renderings—with features such as physically correct and compromise-free global illumination, physically correct refractions, feature-complete materials within reflections and refractions, and super-sampled anti-aliasing.

Users can now also tap Movie Render Queue to render from multiple cameras as a batch process, without having to go through complicated Sequencer setups. This makes it easy to repeatedly create a series of large stills from different viewpoints while working through creative iterations or variations.

With RAD Game Tools becoming part of the Epic Games family, the Oodle Compression Suite and Bink Video codec are now built into Unreal Engine, putting some of the fastest and most popular compression and encoding tools in the industry into the hands of Unreal Engine developers for free.

Pixel Streaming is now production-ready, with a host of quality improvements and an upgraded version of WebRTC. This powerful technology enables Unreal Engine and applications built on it to run on a high-powered cloud virtual machine, delivering the full-quality experience to end users anywhere on a normal web browser on any device. In this 4.27 release, we’ve also added support for Linux and the ability to run Pixel Streaming from a container environment.

This release furthers our goal of having Unreal Engine connect as seamlessly as possible to additional tools, with enhanced support for USD and Alembic. With 4.27, users can export many more elements to USD—including Levels, Sublevels, Landscape, Foliage, and animation sequences—and import materials as MDL nodes. Users can now also edit USD attributes from the USD Stage Editor, including through Multi-User Editing. In addition, it’s now possible to bind hair and fur Grooms to GeometryCache data imported from Alembic. 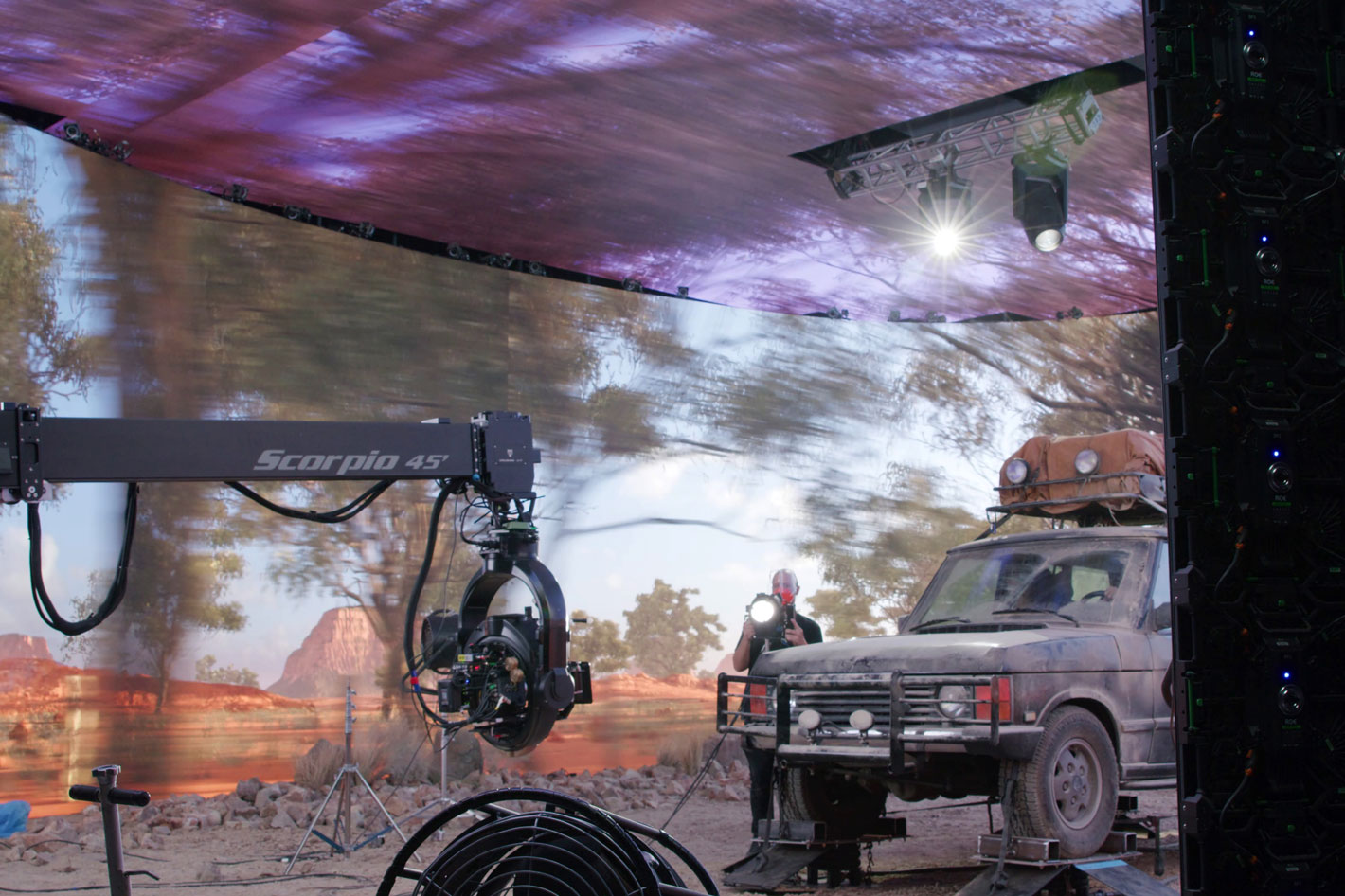 With Unreal Engine 4.27, it’s easier than ever to create XR content in Unreal Engine, with production-ready support for the OpenXR framework. Our OpenXR plugin, which enables users to target multiple XR devices with the same API, now also offers support for additional features—including Stereo Layers, Splash Screens, querying Playspace bounds, and motion controller visualization—and for extension plugins from the Marketplace, enabling you to add functionality to OpenXR without relying on engine releases.

We’ve also redesigned the VR and AR templates to offer more built-in features and easier setup, giving users a faster way to get started with their projects.

Additionally, a new Epic Online Services plugin for Unity is available today in open source. Developed and maintained by PlayEveryWare, the plugin will launch first on PC, with console and mobile support arriving later this year.