This year’s Cine Gear Expo seemed bigger than ever, and while the show attracts many big-name vendors and their latest releases (Arri’s Alexa Mini, the Canon C300 Mark 2, etc.), I like the show because it’s a great opportunity to discover gear that doesn’t normally get quite so much attention. Here are some examples I spotted for 2015… 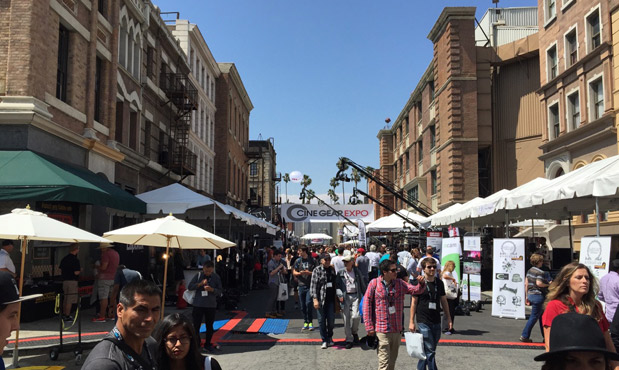 Wooden Camera had a broader-than-ever lineup of camera rig accessories, with custom configurations for just about any camera system around. But the highlights of its booth were two brand new products just on the verge of shipping.

First was Wooden Camera’s Shoulder Rig v2 (based on a 13”, Arri-compatible dovetail plate), which is new-and-improved in every respect. For starters, you can slide the rig’s new shoulder pad and crossbar to any position, and then tighten them by turning a simple thumbscrew with your fingers — no more reaching for an allen key. The shoulder pad is also more comfortable, and the crossbar has a Nato rail running its length, so you can easily slide Wooden Camera’s new Nato locks onto the crossbar to support a Noga arm, or whatever other gear. The Shoulder Rig V2’s base version includes hand grips and starts at $995, with a Premium version with handle bars and grips comes in at $1495. 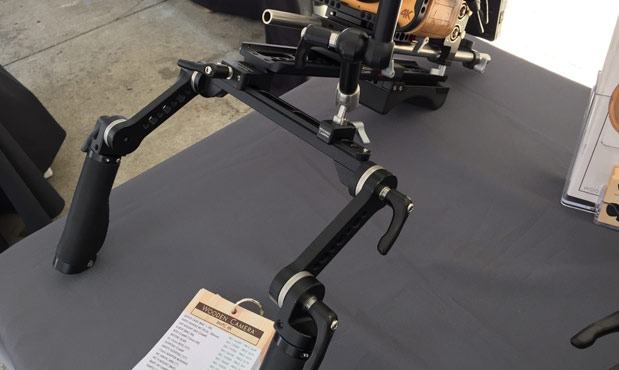 The second new product was Wooden Camera’s new Universal Mattebox, the UMB-1. It comes in multiple configurations (Base, Clamp On, and then a Swing Away) and you can strip down or build up to each version. All versions, though, come with a number of finer touches — for instance, two rotating 4×5.65” filter stages (with safety catches to prevent drop outs), an option to add a third filter stage, a folding French flag for easy storage, and Nato accessory rails on the top, left and right sides for quickly sliding on accessories (an arm-mounted monitor, Cinetape, etc.). The Base version of the Universal Mattebox starts at $995, and a Pro kit, which includes everything in all other kits plus side and bottom flags, runs $1995. 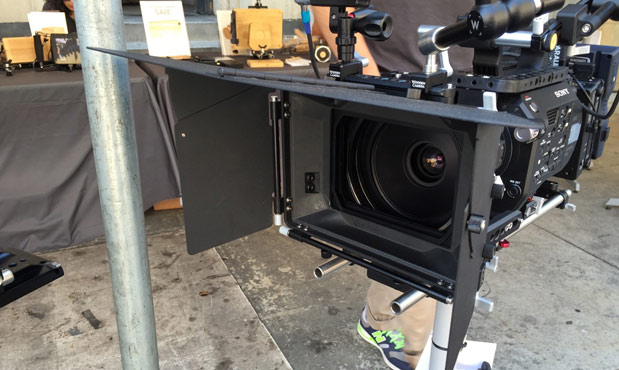 SmallHD was showing its new 500-series monitor, a pint-sized 5”, 1080p display that’s been shipping for a few weeks. The 500 packs a lot of useful features into a frame that’s roughly the size of a smart phone, including waveform, focus-in-red, magnification and the same custom LUTs supported by SmallHD’s bigger monitors. Better yet, I thought the 500’s thumbstick-based interface was surprisingly intuitive, given how convoluted monitor UI’s can get. An HDMI version is $899 and an SDI/HDMI version goes for $1199. 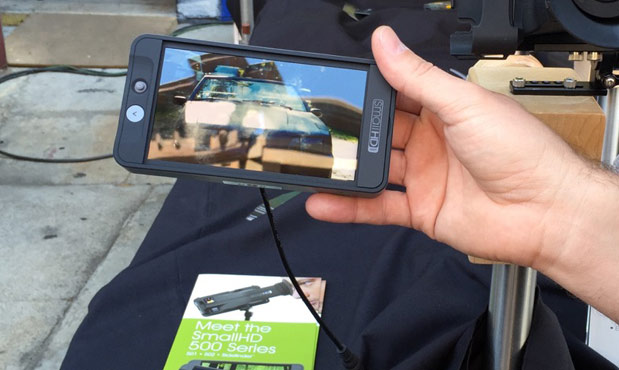 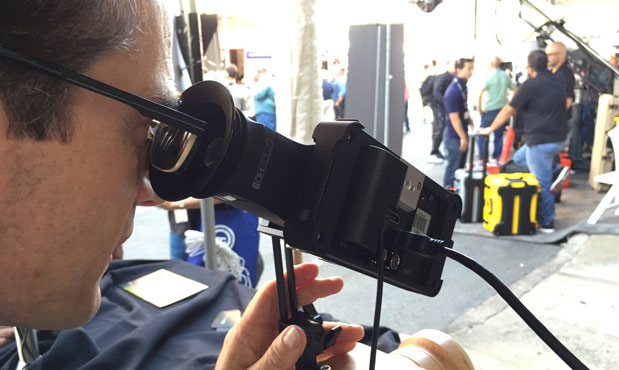 iKan was showing its brand new PD Movie Remote Live, which is a wired version of the affordable remote follow focus system they introduced last year, and which I reviewed right here. The beauty of the Remote Live is that it’s aimed at solo camera operators who need an easy way to pull their own focus (or, you can use it for zoom functions instead). The Live consists of a single lens motor wired to a hand grip with built-in thumbwheel for pulling focus (the wheel was responsive and easy to use).

You can mount the handgrip on the end of a tripod handle, or use it as a grip for certain shoulder rigs. A nice and essential touch: the system is powered by an internal battery built into the handgrip, so you don’t need to add an external battery to your camera (battery life is supposed to be around 6 hours). My one concern: the Remote Live comes with a mount for adding it to 15mm rods, but may not easily connect to Arri-style rosettes. I’ll find out for sure when I write a review in the next month or so.  Price is $999 and it’s ready to ship.

iKan was also showing the Tiltamax wireless FEZ system (focus, iris and zoom), which has been coming “Real Soon Now” for the last two years. You get three fairly bulky motors, a streamlined 3-channel receiver and a full FEZ hand controller for only $6500 (a great deal on paper). Engineers were showing off some great features built into the controller — for instance, you can program any lens’s distance markings into the controller, which then show up on the unit’s touch screen. It’s also very easy to set A and B marks just by touching the desired distance marking on the touch screen (the controller vibrates as you move through the marks) and you can easily set two marks that limit the motor just within that range.

You have to wonder why the Tiltamax has been delayed again and again and again (they’re saying it ships in about 30-60 days, which is what they said at NAB) but if the unit does work as advertised, and does ship this year, it could shake up the field considerably.

Can’t avoid working in oppressively hot climates? Then don a CoolShirt (actually, either a skin-tight shirt, vest or shorts, with a network of tubing stitched in) and let chilled, 55-degree water coarse over your skin.

The CoolShirt system also consists of a battery-powered pump along with a container for a small block of ice and a reserve of water, which you can carry around in either a custom fanny pack, backpack, or tote bag. Also available is a “Rehab Station,” which looks like a big ice chest, and lets multiple crew members plug themselves in for a cool down before going out into the heat again.

Somewhat surprisingly, you can buy a shirt, shorts and portable pump system for well under $1,000, which seems reasonable if you shoot regularly in the heat. 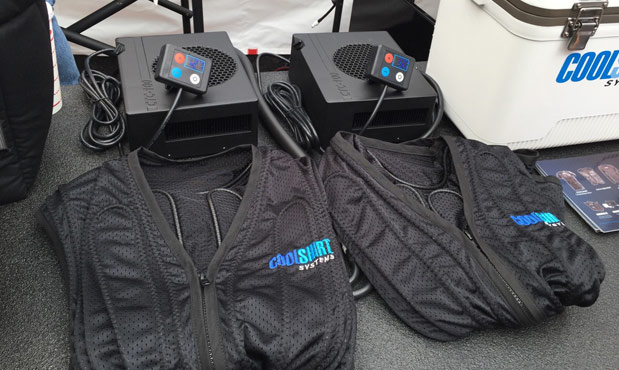 Litepanels used last year’s Cinegear to introduce its popular Astra 1×1 LED light, and this year the company showed a new Bluetooth module for the Astra. For $300, you can install the module in any Astra fixture, and then control light intensity, color temperature and fan speed wirelessly via a free app for iOS and Android. That same app lets you arrange multiple Astras into groups, and cue them wirelessly as well. 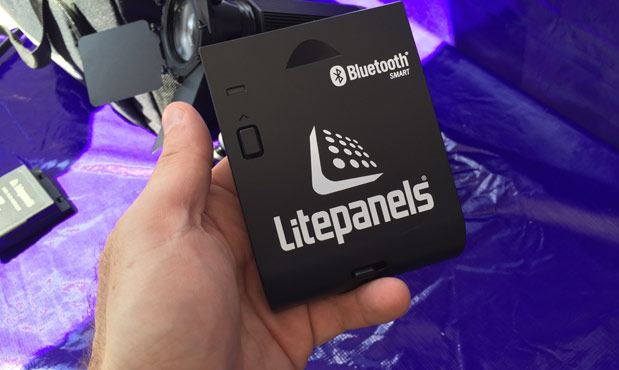 Litepanels was also showing its new Caliber fresnel LEDs, which are focusable from 15-73 degrees and can run off of AC power or 6 AA batteries (for about an hour, or 1.5 hours with Lithium Ion batteries). Running on AC, a Caliber has the kick of a 150w conventional light, and Litepanels is selling 3 of them in a 13 pound soft case kit for $995. You can use the Calibers as a three-point interview kit (if you don’t mind a little hard light as a key), or add them to an existing key light as edge lights or accents. 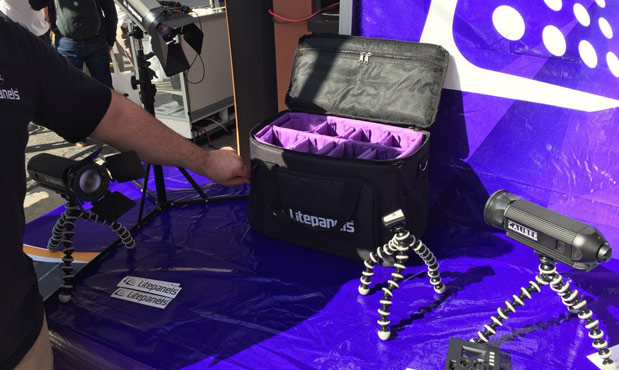 Big brick batteries are getting cheaper these days but Broadcast Camera Batteries seem to have broken new ground in affordability, with a 70Wh battery for only $149 retail, and a 98Wh version for $213 (you can get them in either Gold or V-mounts).

But the batteries also have some unique features as well: I noticed they’re lighter than typical Anton Bauer or V mount batteries by as much as a third, and you can also charge them with simple AC adapters (including a dual-head adapter for two batteries) instead of having to cart around a beefier charge station.

You can buy the batteries direct from Broadcast Camera Batteries in California. 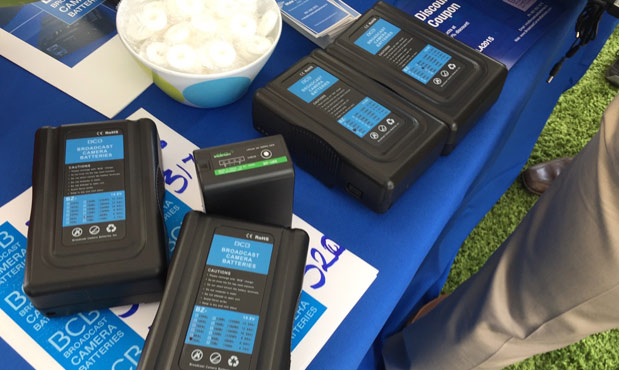 Cool-Lux is known for its lights, but it’s branching out into camera rigs starting with an innovative baseplate system called the Shift Baseplate. It works with all cameras, and features a sliding camera plate with over 4.5 inches of balance adjustment range, an integrated shoulder pad, and a unique tripod plate that folds outwards to become a chest support pad when you put the camera on your shoulder.  When you’re ready to put the camera back on a tripod, just fold the tripod plate back in.  To really understand, check out the video below.

Aladdin’s has been making flexible, water-resistant LED “panels” since last year, but has now gone bi-color with its new Bi-Flex kit, supporting a color temperature range from 3000-6000 kelvin with a CRI of 97.

The $899 kit includes the 10×10” LED panel, AC adapter, a dimmer and battery plate integrated into one unit, extension cable, swivel mount, cable ties and a sheet of clip-on diffusion to soften the light.