Learn how to use Sonicfire Pro 5 to create and edit music scoring for your video projects in Adobe Premiere Pro CS5. 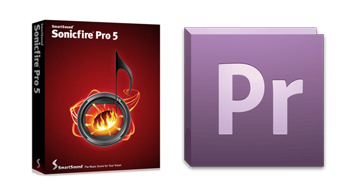 Watch as I use real-world examples of how I work using SmartSound Sonicfire Pro 5 with Adobe Premiere Pro CS5 in a broadcast bumper. The first video is an “over-the-shoulder” view of the production process with little explanation of why I’m choosing specific tools, but rather a fast-paced overview of just how simple it is to select and edit the music soundtrack to work with the various parts of the video; including voice over and interview clips. The second video takes a more in-depth approach to the round-trip workflow between Premiere Pro CS5 and Sonicfire Pro 5, and why I choose specific tools for the quickest editing possible.

In this tutorial, I show how quick and easy it is to create a custom soundtrack in Sonicfire Pro 5 and adapt it to my video project created in Premiere Pro CS5. This is a quick “over-the-shoulder” overview video that follows along the entire process of selecting, editing and reviewing the final video production. By rendering out a low-res version of my project in Premiere Pro, I can import it into Sonicfire Pro 5 and do all of my soundtrack editing to match the video ques without having to go back and forth between the two apps or wait for long previews renders to test the edits. Sonicfire Pro 5 also uses smart “Mood Mapping” technology that adjusts not only the volume of tracks along the timeline, but also drops out instrumentation as needed for sections of dialog or voice over. Any updates to an AIF file that is created by Sonicfire Pro 5 that you import into your Premiere Pro project, can be re-edited again in Sonicfire Pro 5 with all the track editing data retained. This is truly a smart and efficient workflow!

I cover editing the soundtrack in this video, by using the “Edit Original” option in Premiere Pro CS5, which launches Sonicfire Pro 5 and a new project file is created with all of the original track data still intact from the AIF file. Inside Soncifire Pro 5, I can edit the soundtrack and adjust the mood mapping points as well as the fade up transition and individual instruments where the overlap with the voice-over ends in a segment. Since it also recalled the low-res video I used to create the original soundtrack with, it’s easy to see the edit points. All of the editing is done in Sonicfire Pro 5 and the finished AIF is then saved-over the original file so it’s automatically linked back into the Premiere Pro project without having to re-import or replace anything.