Canon set to release the camcorder upgrade you need, not the one you want 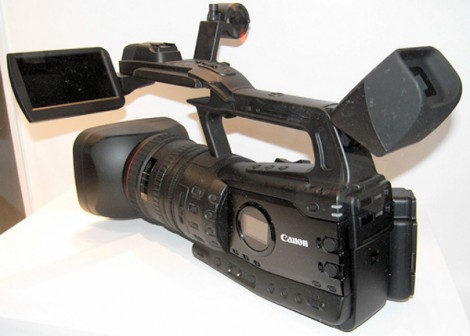 There’s been a lot of speculation on the new camcorder that Canon is revealing today at the SF SuperMeet. Some (myself included) have been hoping wistfully for a proper camcorder body and controls wrapped around a DSLR sensor, perhaps APS-C sized, with an interchangeable lens mount for common Canon L-series lenses. In simple terms, the camera of our dreams. Well, details and pictures of this new camera model are out, and to put it in romantic terms, we are fools for dreaming. Read on…

Canon is a massive operation. Their camcorder division has no doubt been working on this latest camcorder update since long before they stumbled into DSLR video. And yes, I do mean stumbled. It was a total fluke that they discovered the VDSLR market, this was no pre-meditated move on their part. And behind the scenes they are still playing catch-up…24p on the 5D is still not out, and despite all the love we hold for ’em, shooting video with Canon DSLRs is still a very fiddly creature.

So when we hoped for an upgrade to the A1/G1 body, with proper exposure features, proper audio inputs and monitoring, and everything built around an APS-C sensor with an interchangeable lens mount…well, we were wishing for the impossible. They simply can’t and won’t deliver that right now. The ship is too big. It takes too long to turn things around. How long did they ride the HDV tape wave? They are literally the last major manufacturer to deliver a solid-state camera! That is the curse, and oddly, the blessing, of a large corporation like Canon. The curse is that we don’t have those tools now, and we will be forced to continue to invent tools and techniques on the bleeding edge of DSLR video. The blessing is that Canon is steady, you know what you can expect in their development schedule. They are releasing an upgrade to the A1/G1 that is a proper camcorder. It has solid-state recording. It has a solid codec that will integrate easily into common NLEs and workflows. It likely has 3x CCD sensors. It’s a form-factor that videographers understand and are already accessorized for. This is the blessing of a battleship-sized behemoth like Canon. They will ship a rock-solid camcorder. Unfortunately this means it may well be a few years before they ship the rock-solid camcorder the little boy inside me wanted them to ship.

Red Digital Cinema, on the other hand, is a Destroyer-sized vessel. They can and will turn on a dime. They embody the bleeding edge. They add features because the community asked for it. They push ship dates back when they want to, so they can add features and revise designs. They release tools because we want them and can use them, not when they are 100% bulletproof, and offer no apologies when things break. We love them, and we love to hate them for it.

We, who wistfully hoped Canon would release this ethereal camera of our dreams, made the mistake of projecting Red’s nimble attitude on a company that is far from nimble. With this latest model, Canon built the camera that we should have known they would build. A practical, well-considered upgrade to their line of workhorse HDV cameras. A camera that you’ll use day in and day out for common, everyday, dare I say boring, work that pays the bills. And that upgrade path makes perfect sense. What fools we are for assuming anything different.