My only assumption with this tip is that you use Adobe After Effects CS4 (or even CS3) on a multi-processor machine, Mac or Windows. Beyond that:

If any or all of these is true, get ready to buy Lloyd Alvarez a beer, because he offers the answer to all of these and more. Lloyd’s site is home of many useful tools, another of which may appear in this space this month, but as my first true tip of the month I wish to promote his most infinitely valuable script. And I say infinitely valuable because BG Renderer is offered free, a 100% discount off the alternatives. 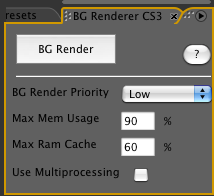 BG Renderer is a script with a little GUI of its own (shown above) that is familiar and will quickly find a home among your panels (the only caveat being that all script panels – including this one – that are open when After Effects is launched and quit will cause a crash on close. It’s a crash that doesn’t lose any data, but annoying nonetheless.

But until Adobe fixes that little bug, this one is worth the bother. You simply load it into your ScriptUI Panels folder (there are instructions showing how and where) and then you can find it in the Window menu. Its controls are simple: set BG Render Priority, maximum RAM usage and RAM cache, and toggle whether or not to use multiprocessing. Each of these sets an argument to be added to the command which is sent to the shell, and that’s all BG Renderer does – send the render or renders in your queue to the shell.

It’s just like rendering in the Render Queue, with the following exceptions:

However, contrary to what you might think, moving image formats with sounds such as QuickTime are not off-limits with this method (Lloyd just recommends you open the file before killing a render if you want to save any of it).

I find I only change the Render Priority and Multiprocessing – my renders tend to be either Low priority and no multiproc, or High with multiproc to peg those processors (sometimes leaving the machine to have difficulty even with smooth iTunes playback). Although I haven’t benchmarked to quantify how much faster this latter type of render is than a Render Queue equivalent, I have consistently noticed the processors pegged much more often when rendering this way.

You may find that you hardly ever see the Render Queue anymore. Just don’t miss the opportunity to buy Lloyd that beer.