An alternative to Crimson Workflow for the less geeky.

I have advocated that – in most cases – when working with R3D files you should convert them to another format instead of attempting to preserve the R3D as long as possible. How exactly to optimally adjust footage in REDAlert and output it is the subject for a longer article that will have to wait until later, but the practical question of how to take, say, a rough cut in Final Cut Pro and convert it from R3D to QuickTimes or TIFF or DPX sequences is much more easily solved with a shareware tool called Monkey Extract.

For a while the only tool available that could look at an XML edit file and convert, or you could say “media manage” a set of edit decisions into individual clips with handles was Crimson Workflow. That tool and Monkey have in common that both are merely a GUI that runs Redline, the command-line utility that installs with REDAlert. But Crimson still has a lot of technical-feeling controls in it that you practically have to understand the command line tool in order to use properly.

Monkey Extract, on the other hand, offers all of the same control but does what good UI’s do: present only the essential stuff at the top level, and leave the low-level stuff where it is easily accessible but not so in your face.

It also works with more editing apps than just Final Cut – Avid is supported, along with Premiere Pro and Vegas. You can even use Qmaster if you have a bunch of Macs available and a big project to convert. Like Crimson, it will convert to TIFF, DPX and QuickTime.

It’s shareware, and if you buy it you get some powerful extra features, like the ability to rename RED footage and update DPX headers. Consider it the next time you’re thinking of converting edited R3D files. 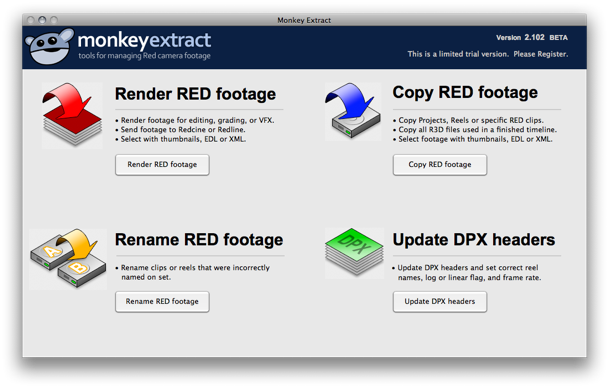