Sound the trumpets! The 2-year mourning period that began in 2009 can finally end! 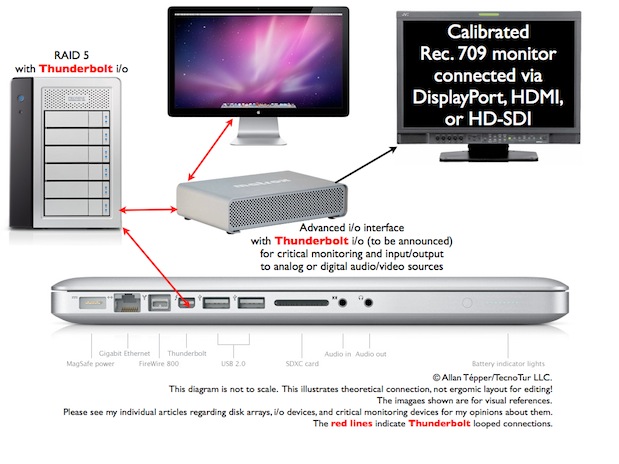 As we have amply covered in multiple articles in ProVideo Coalition magazine, demanding online editing of multiple realtime HD video layers requires a high bandwidth connection to an external disk array, especially in the tapeless acquisition era, when it is even more desirable to use RAID5 (or equivalent). In many cases, it is also extremely desirable to have a high bandwidth connection to advanced video i/o devices from companies like AJA, Blackmagic, and Matrox. Since Apple laptops have never offered direct eSATA ports -and some professional i/o interfaces connect via the ExpressCard/34 port, demanding editors were able to connect one or the other (but not both simultaneously) in sub-17″ MacBook Pros until June 2009, when Apple nixed the ExpressCard/34 slot on 15″ models. Now that Apple offers a Thunderbolt port on all MacBook Pros (13″, 15″, and 17″), we’ll soon be able to have both of our wishes simultaneously: high bandwidth for external storage, and high bandwidth for advanced video i/o interfaces. Thunderbolt in a laptop indeed represents a quantum leap for serious video postproduction. (See also my upcoming related article regarding Thunderbolt in live video production.)

The virtues and limitations of ExpressCard/34

Since no MacBook Pro has ever had an eSATA port, many people who needed enough throughput for multilayer HD from an external RAID5 (or equivalent, i.e. Drobo) would install an eSATA controller card in the ExpressCard/34 slot which used to exist in 15″ MacBook Pros, and continues to exist in 17″ models. On the other hand, some people would connect an advanced external video i/o interface, like the Io Express from AJA, or any of the MXO2 family of products from Matrox (i.e. the MXO2 Rack, MXO2, MXO2LE, and MXO2 Mini). Both make great use of the ExpressCard/34 slot, but on a MacBook Pro, there have been no way to use both simultaneously. The options have been either to connect your i/o device and slow down your RAID to FireWire800 speeds, or to sacrifice your i/o to connect the RAID at eSATA speeds. (With other brands of laptops that have both a built-in eSATA port and an ExpressCard/34, it has been possible for a while.) In any case, Apple nixed the ExpressCard/34 back in June of 2009 in 15″ models, which was historically recorded in Adam Wilt’s article. Since then in the MacBook Pro world, ExpressCard/34 has been available only with the 17″ model and in used 15″ models. Of course, the ExpressCard/34 card slot (when available) is still very valuable for SxS memory cards used in the AJA KiPro and in several Sony cameras.

Thunderbolt says: “Here I come to save the day!”

Click on the image above for a larger version of the diagram.

Thunderbolt is an Intel technology which (in computers) is currently available exclusively in Apple’s new MacBook Pro models. With Thunderbolt, we’ll have enough bandwidth and enough “loopability” to cover just about anything we’d like, including fast disk arrays and advanced video i/o. In fact, many Thunderbolt devices will be bus-powered, which means we’ll be able to skip the power supply… or supply power to only one of the Thunderbolt devices in the chain. Before writing this article, I inquired with AJA, Blackmagic, and Matrox. Two of the three have already responded that there is nothing official to announce yet, but virtually winked to wait for NAB time, at least for announcements. Even if they don’t have anything available immediately, I suspect that there will be Thunderbolt devices with one or more ExpressCard/34 slots in order to connect current products, like the Io Express from AJA, or any of the MXO2 devices from Matrox. There may also be a similar Thunderbolt device with a PCIe slot. On the other hand, AJA, Blackmagic, and Matrox may offer cables for their current models that have their connector on one end, and a Thunderbolt connection on the other (with some electronics in the cable). New drivers will likely need to be written to make these devices work this way.

Is the King of DAS dead? Has Thunderbolt dethroned eSATA?

Is the King of DAS (Direct Attached Storage) dead? The current King of DAS is eSATA or SATA, depending upon whether it’s internal or external. Well, when the external enclosures with Thunderbolt ports reach the market, it will likely be the time to say that Thunderbolt -as a conduit between the computer and the container- has dethroned eSATA. However, as long as we use magnetic drives to store video in editing systems [which we will for quite a while longer, since SSDs (Solid State Drives) are not even close to being affordable for the huge video files used during production and post-production], it is very likely that the drives inside of those containers will continue to have a SATA or SAS interface. This is the same case with FireWire. To my knowledge, there has never been a truly native FireWire drive. There have been IDE/PATA, SATA, and SAS drives inside of boxes that contain bridge chips to FireWire. I expect this to change only with SSDs, where it would make sense to take advantage of the increased bandwidth offered by Thunderbolt. I also expect Thunderbolt devices with eSATA ports to enable existing eSATA drives and arrays to connect to a Thunderbolt chain.

Hold your horses, fellow podcasters and PR departments! The lower case “b” makes a huge difference compared with the uppercase “B”! Yesterday, I heard a fellow podcaster misstate the meaning of “Gb/s” on his program when he read Thunderbolt’s specs aloud as “10 Gigabytes“. And a few days ago, I received a press release to translate, which erroneously included the term “GB Ethernet”, which doesn’t currently exist! Only Gb Ethernet exists at present! Gb/s means gigabits per second, not gigabytes per second! The abbreviation Gb represents Gigabit, while the abbreviation for GB represents gigabyte. Depending upon whether you consider the nomenclature where one kilo = 1000 or 1024, the translation of 10Gb/s (gigabits per second) could equal 1250 MB/s (megabytes per second) or 1280 MB/s… a huge difference between the translation of 10GB (gigabytes per second), which would be 10000MB/s or 10240MB/s, respectively. (Apple and Intel apparently use the former of the two nomenclatures.)