The answers aren’t all good but based on rumors they were expected. 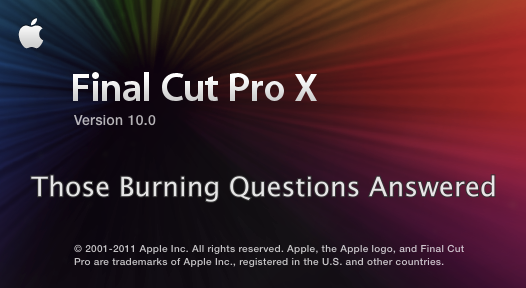 Well here we are into the first official evening of Final Cut Pro X’s release out into the world. It’s been a busy day and a Twitter search will show a good bunch of love, a whole lot of hate and a little bit in-between. There were a blessed few who got advance copies and they’ve written some FCPX must read articles. If you want to try it yourself then $299 and the Mac Apps Store will get you a copy. I first want to answer the Burning Questions that I had just the other day.

As I mentioned in the Burning Questions article I defined professionals and these questions are ones that pros wanted addressed. We may be a small overall percentage of the video editing market but we are vocal and we push our tools to the limit. One pattern you’ll see below is that FCPX may be adding a lot of these features in the future. One argument you’ll read is that Final Cut Pro X is really a version 1.0 product and features haven’t been left out they just haven’t been written yet.

I don’t buy that argument as Apple chose to market this as Final Cut Pro TEN and be it a new app or not that number comes after SEVEN so it’s not unreasonable to expect things that were in 7 should be in 10. Add to that the fact that Final Cut Pro 7 and Final Cut Studio 3 were removed from the Apple Store today so from this point on it’s FCPX or stay with FCP7 (unless of course you want to move to Avid or Adobe). To completely start from scratch and build a new, modern application is commendable but when it lacks many, many features that its predecessor had and you’re still calling it pro and a newer version then you can expect a lot of negative feedback from current users who rely on those features. FCPX currently sits at two and a half stars in the App Store.

Will FCPX support XML in and out of the application? 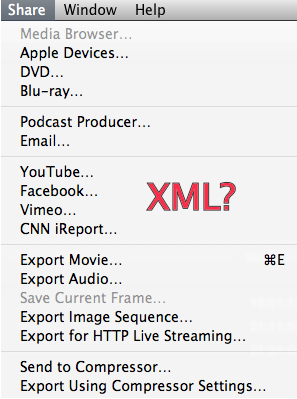 No. As of right now there is not XML support. Word is that XML will come in the future and it may be something better than XML but as of FCP X 1.0 it’s not there. Of all the things missing from Final Cut Pro X (and there are many) XML seems like one of the two most glaring oversights. So much of Final Cut Pro’s overall success has hinged on 3rd party utilities and many of the best are XML based. Even if Apple had to hold FCPX back to a fall release I think it would have been worth it to add XML. The negative blowback would have been lessened.

Will 3rd party I/O hardware be supported at launch?

Negative. My Matrox MXO2 Mini doesn’t work, neither does my AJA Kona LHe. This is the other of the two most glaring oversights that IMHO should have delayed the release of FCPX until it’s a bit more ready for prime time. One thing that did happen today was that AJA released a KONA X Beta Drivers for their KONA 3G, KONA 3 and KONA LHi products. But give a read to the pdf documentation and you’ll see this is a kludgy solution at best as its using FCPX’s Show Viewer on Second Display option to use your broadcast monitor as an extension of the computer desktop.

I don’t think this is AJA’s fault and they should be commended for coming up with some solution but how Apple can released a “pro” editing application with what is supposed to be advanced color grading controls with no ability to use installed, accepted, industry standard hardware to view on a broadcast monitor is beyond me. 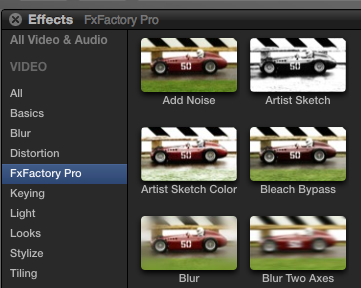 Fx Factory seems to be the first effects plugin to work with FCPX.

Yes and no. Overall 3rd party plug-ins aren’t supported and according to some of the developers I talked with, as of right now, there’s no API for developers to write to. If you look at Apple’s Motion 5 page there is mention of FxPlug2 but word on Twitter is that developers aren’t very happy. Noise Industires did release FxFactory 2.6 with FCPX and Motion 5 support (Motion 5 hit today too for $50) so there is at least one effects plugin package available.

Automatic Duck also released an update for their Pro Export FCP that “includes an export app that works with the new Final Cut Pro X to export AAF or OMF to send audio to Pro Tools.” That’s good as that means it’s possible but there’s a lot more exporting we need than just audio to Pro Tools (though that is a BIG one). Odd thing is that at $495 that export to Pro Tools option costs more than Final Cut Pro X.

We should see a few more 3rd party developers release some FCPX tools in the coming weeks.

Will there be any tape-based support?

The good news: YES! The bad news: It’s only for Firewire-based cameras: DV, HDV, probably DVCPRO HD. So as for capturing from broadcast tape decks like D-Beta or HDCAM SR (or outputting to those formats and all others) it’s not happening in FCPX. You can use 3rd party tools to capture to Prores and output to tape but not in FCPX.

What strikes me as really odd about supporting Firewire cameras is that Apple itself has been moving away from Firewire (not to mention all the camera manufacturers) so why even support Firewire tape at all? If FCPX was a total rewrite from the ground up why spend any resources writing that kind of support when it could have been spent working on 3rd party hardware? Unless that was just code copy/pasted from iMovie is really feels like a waste.

Will we be able to switch the FCPX layout to a more traditional 2-monitor setup?

There are very limited options for rearranging the FCPX windows.

No. FCPX is a one window application. There are two options to show Events or the Viewer on a second display but that’s it. You can’t even rearrange existing windows and save that layout into a custom window setting. That’s a real shame as it’s so easy in FCP7 to have many different layout for many different tasks.

Will FCPX support multiclipping and multicam?

No. There is neither multiclipping or multicam. Word is that this will be added back in the future. Are you seeing a pattern here?

Will there be a Media Manager? 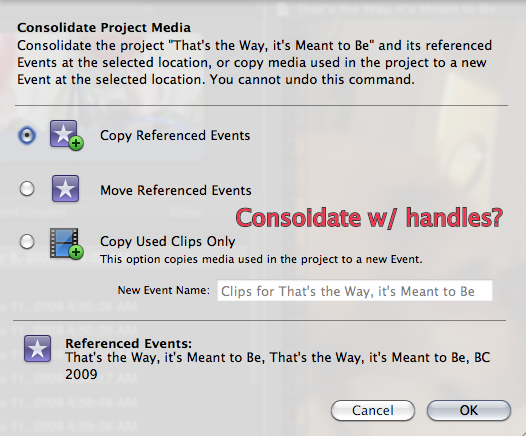 There seems to be no option to delete unused media and retain handles.

Kinda. There is a Consolidate Project Media option that will all you to Copy or Move referenced events. You can also choose to Copy Used Clips Only which is like trimming the project down … but there’s no option to delete unused media with handles.

Will FCPX’s Events be the only way to organize media? 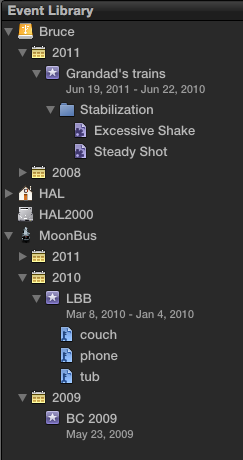 This could become a cluttered way of organizing and finding media after a lot of projects.

This looks to be the case. Event organization might be something I could get used to, after all you can name a new Event when importing media. But it really feels like hands are tied once Events are created. I’m seeing all my hard drives in the Event Library, even ones where I have no Events. You can add a Folder and organize Keyword and Smart Collections but not events themselves.

After a couple hours of playing I have a rather cluttered looking Event Library with way more twirly disclosure triangles than I would care to navigate on a daily basis. Thankfully there’s a Find/Filter option that can be called up when clicked on an Event that has some powerful filtering options.

Will there still be a Studio?

No. The only applications left (these are Mac App Store links) are Final Cut Pro X for $300, Motion 5 for $50 and what appears to be a still 32-bit Compressor for $50. Some people say that Color and Soundtrack Pro are now built-in to FCPX and while there are color and audio tools in FCPX they aren’t as powerful or feature rich as those now gone dedicated applications were. And you can’t rely on auto color tools to always get the job done right.

You’re going to want Compressor as even though there’s a number of Share options you can’t export only a piece of the FCPX timeline (say a single shot to send to vfx). It’s the whole thing or an Export to Compressor to select an IN to OUT. At least that’s what I hear, when I try to export from an open timeline FCPX crashes.

There is a lot to like in Final Cut Pro X and I’ll definitely be kicking the tires on it a lot more. While I won’t be using it on mission critical, client jobs I’ll cut some of my own person stuff on it and continue to dig deeper. There are some features I really am excited about trying. I hope to post a full kicking the tires article at some point in the next few weeks.

Next week, on June 30 at 10:00 AM PDT, I’m presenting a free webinar called Final Cut Pro X Hands On Tour. This webinar will go into more detail about a lot of these features, questions and concerns. It’ll be a fun and honest look at FCPX so register for free if you want to attend.