In the physical world, you can ride a ferry from Calais to Dover (you know, where the bluebirds are flying). In the semantic web world, you can fact tag text with the OpenCalais web service and sentiment tag it with the OpenDover web service, which, contrary to its U.K.-influenced name, actually hails from a company in Holland, Byelex Multimedia Products. 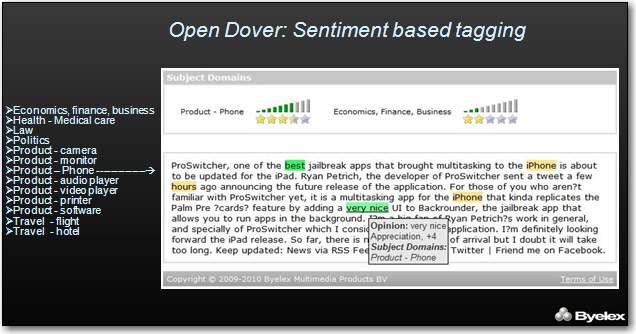 Its approach to sentiment-based tagging is to parse text against domain specific and general collocation vocabulary sets, to help with the word disambiguation issues, according to company founder H.E.R.M. Vissia. Plans are afoot to make the web service available as an API soon through Mashery, so that developers can use it as one source for creating applications that marketers, research companies, and others can use to automate insight into opinions on topics, trends, services and the like that surface in tweets and blogs. (Developers have single-sign-on access through Mashery to other semantic web service APIs we’ve written about here, includingPrimal,YoLink,Zemanta andzoominfo.)