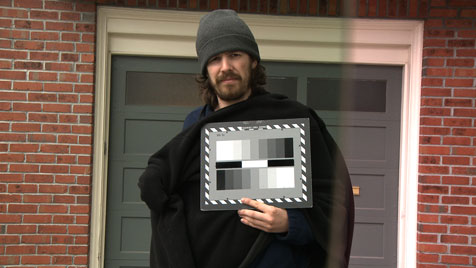 The Sony EX1/EX3/F35 cameras have a little issue where they are over-sensitive to far red. This new prototype filter from Tiffen cleans up far red, and then some.

Before we get into the exciting world of test charts, let’s take a look at what far red contamination means to you. Here’s Anthony, prep tech at Videofax, modeling the finest in synthetic black fabric wear: 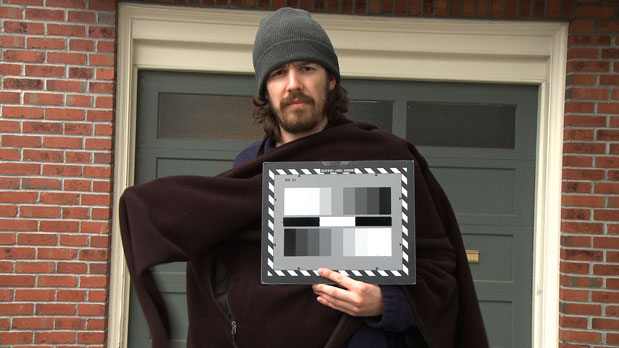 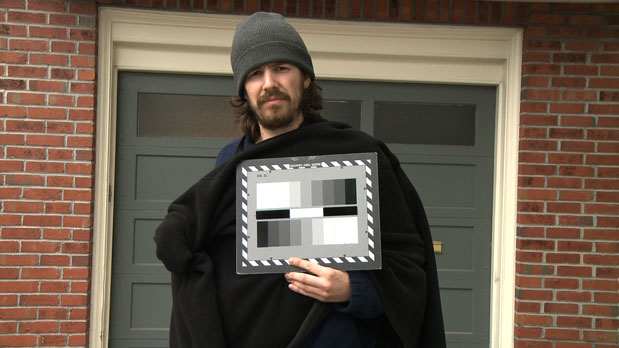 The bottom image, shot through Tiffen’s prototype no-ND far red filter, shows that Anthony’s fashion sense isn’t stunted at all. With so much black he could easily be mistaken for either an artist or a DP.

Let’s move on to what this really means. And thanks to DP Lenny Levy for shooting the images above during our testing session last Thursday.

If you were thinking something along the lines of “More test charts, please!!!” then proceed to page 2…

Let’s start with what we saw on the EX1. Here’s both a standard black-and-white chip chart hung alongside a MacBeth, mounted against a background of black duvetine and draped with some random fabric that reflects both IR and far red. 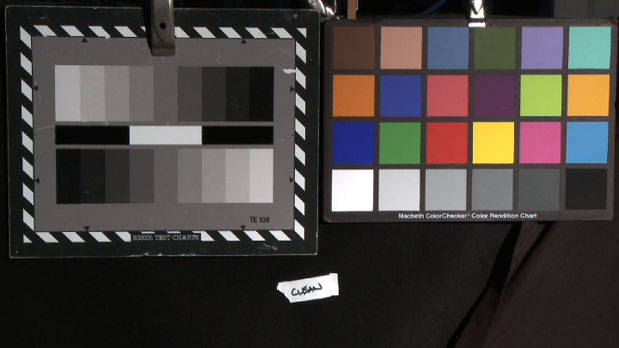 In this unfiltered frame you can see some unintended red in the black fabric draped across the bottom right of the frame. 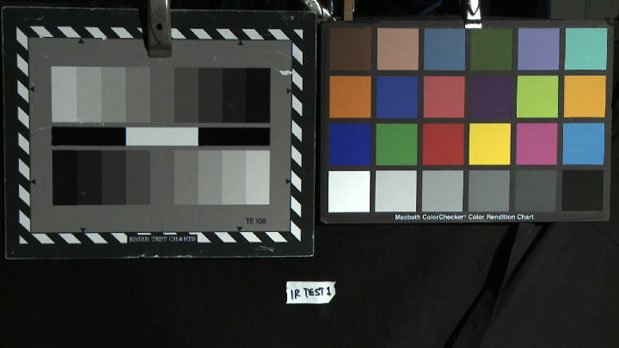 This frame shows what happens when we add the Tiffen prototype far red filter. It’s interesting to notice that the colors containing red on the MacBeth chart are dramatically less saturated in this image than in the first one. I think you can make a case that the unfiltered image shows reds to be a little over the top, but I’d be curious to see which version of the chart you prefer: saturated reds, or desaturated reds.

The other possibility is that the colors that reflect red are also reflecting far red, to which the camera is oversensitive. When I shot this same test with a DSC chart, and overlaid the filtered results over the unfiltered results, there was no color shift at all. See those results here, on page 3 of this article. It could be that the dyes in the DSC chart are more far red-neutral than those in the MacBeth chart.

The following images show something very curious going on. Even though we are adding internal ND, there’s no increase in far red contamination. (The two different notations of ND indicate which filter is being used in two different terminologies.) 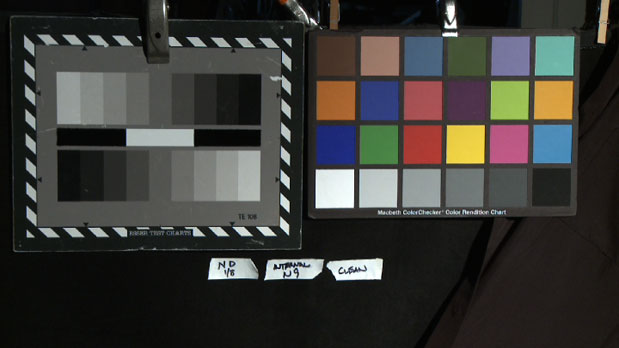 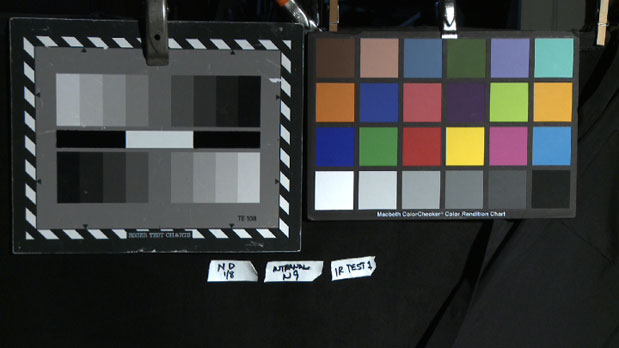 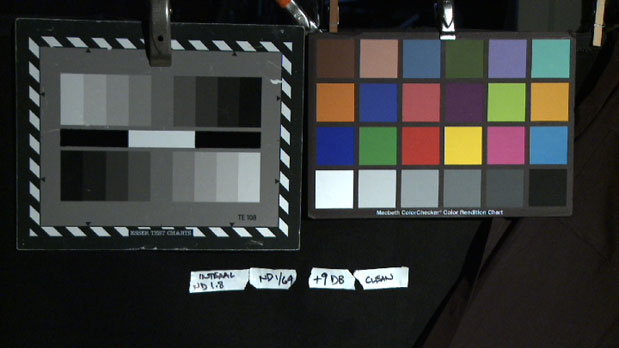 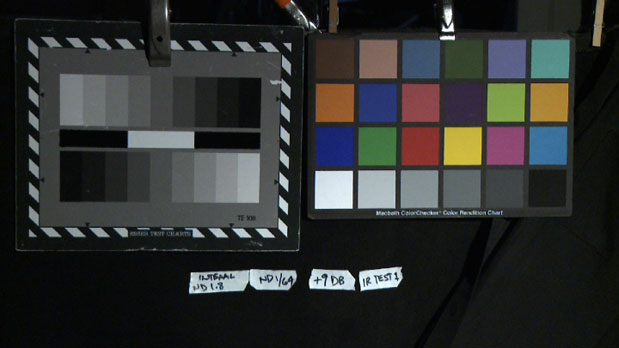 When adding ND to any other camera, the far red or IR contamination typically becomes worse because you’re blocking visible light while allowing more far red/IR to pass. In this case, though, that doesn’t happen when using the camera’s internal ND filters: the far red contamination is the same no matter what internal filter is used. This implies that Sony has built some sort of far red filtration into the ND, although why they weren’t able to take care of all of it is a bit of a mystery. It could be that they are emphasizing the camera’s ability to reproduce a wide variety of reds at the expense of ensuring that every black material seen by the camera remains black. I’ve got an email in to Sony asking for more details, and I hope to have something to report soon.

Meanwhile, it appears that this filter–when finally released–may be the only far red filter ever needed for this camera. No expensive sets of IR ND filters for EX1/EX3 owners: one screw-in filter and you’re done. This makes perfect sense, considering that a full set of IR ND’s is beyond the reach of many EX1/EX3 owners who don’t want to spend 30-40% of the cost of their camera again in filters.

There is going to be at least one more prototype of this filter manufactured before the final version is released, so stay tuned.

Here’s the Sony F35 with the same setup. The problem here is lack of consistency: I have to work with different fabrics at different rental houses because I haven’t settled on my own standards yet. This test session, though, showed me how to set up a consistent black fabric test chart. More on that below. But first, here’s the F35 without, and then with, the Tiffen no-ND far red prototype filter: 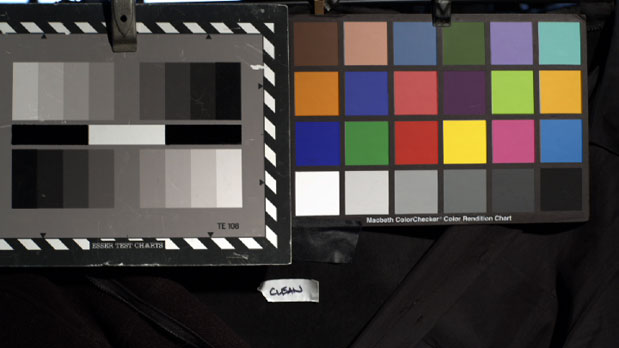 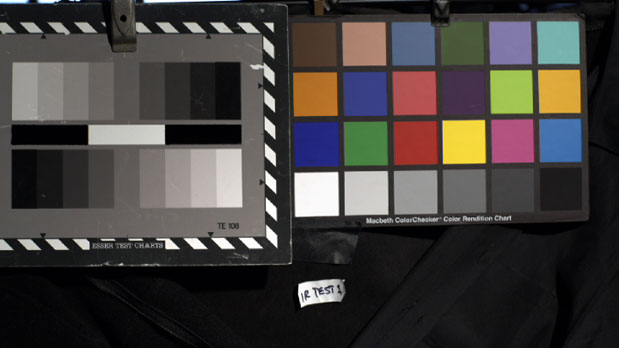 If you saw no difference, ha! Ha, I say! Because there is virtually no difference. While there may be a minute amount of far red contamination in the target fabric, this particular fabric is not a good far red test subject for the F35. Obviously the F35’s far red filtration is better than the EX1/EX3 (you get what you pay for!) although there are fabrics that will cause the F35 to react more strongly.

Just for fun we did something you’d almost never, ever do, which is add a bunch of ND while shooting under tungsten light. In the following stills we tested both a Formatt ND .90 and Schneider ND .90 to see how they enhanced far red, and also to see whether the Tiffen prototype worked equally well under both circumstances: 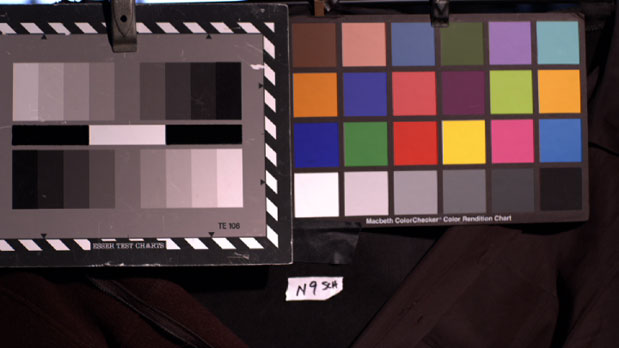 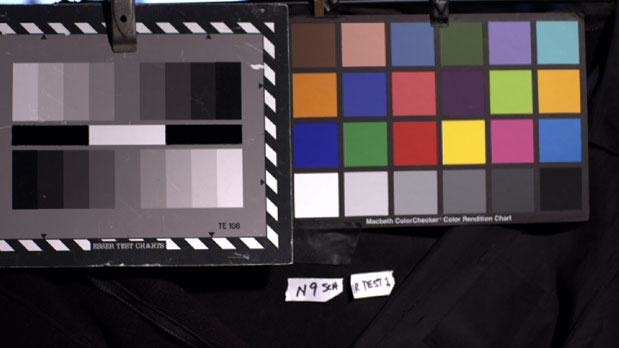 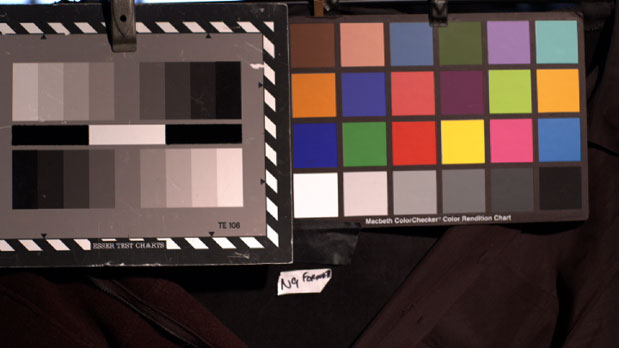 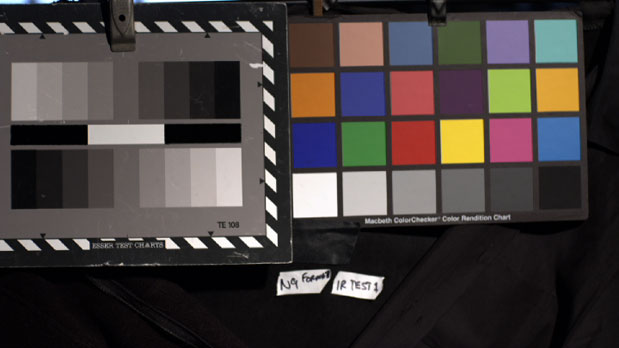 There are two interesting things to note here:

(2) The Tiffen prototype no-ND far red filter cuts far red when added to an ND .90, which is pretty surprising as it’s really only supposed to be used on its own, with no additional ND. That’s a strong filter!

Just for fun we decided to really stress the F35, adding both the Schneider and Formatt ND .90 filters together to create a double-whammy of far red: 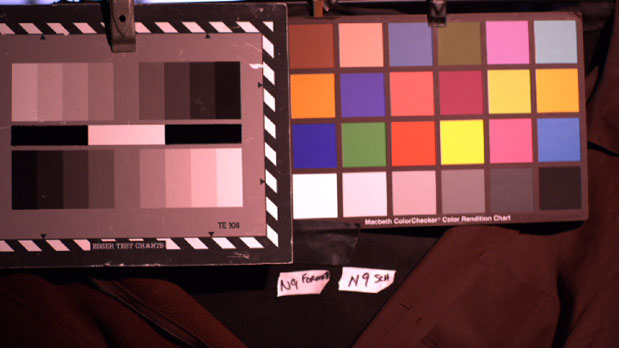 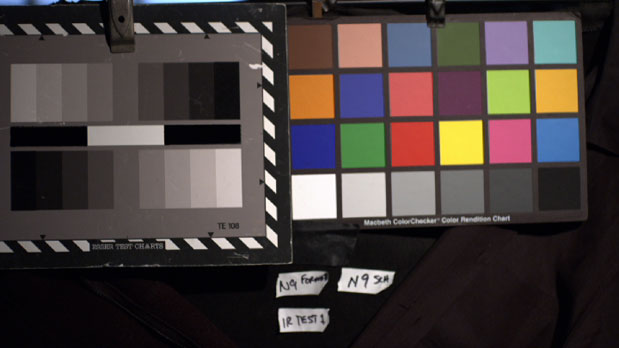 You’d never do this, but it’s fun to see what happens. It’s also amazing to see that the Tiffen prototype filter cleans up nearly all the far red, even at an effective ND 1.8! I’m starting to wonder if this filter is stronger than it needs to be for its intended use. I’m also really impressed that Tiffen found a way to snip off an offending portion of the spectrum without using a hot mirror, avoiding all the issues that a hot mirror creates (ghosting, vignetting, etc.).

An interesting side note is that we discovered that we could see far red shifts in fabrics simply by looking at them under tungsten light through an ND .90, which completely surprised us. (This should also work in daylight, although I haven’t tested this yet.) The overall color shifts a bit warm, because ND filters are rarely neutral, but the far red contamination jumps right out at you with no subtlety at all. In fact, looking through an ND .90 by eye resembled the combination ND .90 + ND .90 chart showed above.

This could turn out to be a great preproduction trick when shooting with the Sony F35, EX1, EX3, and Panavision Genesis cameras. It also means that I can walk the aisles of a fabric store looking for problem fabrics with which to build a standardized test chart. I’ll probably do that next week, and then we can start looking at which materials are the worst offenders.

Before then, look for me at CineGear!

Art Adams is a DP who often sees red. His web site is at www.artadams.net.