The landscape in the broadcast world is changing

The landscape in the broadcast world is changing. Big time. Think about it – broadcasters have:

* Moved from analog to digital transmission.
* From standard definition to high definition (two flavors, not one by the way).
* We’ve gone from a couple of formats (betacam and DV) to an ever growing list of formats.
* The world has gotten even more media saturated meaning that content has to be even better.
* Broadcasters don’t worry about one screen (TV), they worry about three (TV, online, mobile)
* The world has moved from tape based (remember those?) to file-based formats.
* And oh, by the way, we’ve had an incredibly challenging economy that means capital expenditures (improving your equipment) have been difficult to say the least.

Without the least bit of exaggeration, many people have said that this is the perfect storm of change and with this change there’s an opportunity to thrive from it. That’s where Adobe’s been focusing – how to make our customers succeed in this storm of change.

This will be the first of a two part entry. Here, I will outline the challenges that broadcasters are facing and how Adobe can help address them. In the second part, I’ll provide some feedback I’ve gotten from executives on their business as well as their reactions to CS5.

Firstly, broadcasters cannot continue to keep doing things the way they’ve have in the past. Customers have told me that over and over again. To do the same thing is to stand still and to stand still is to die. The speed of innovation has increased and the need to try things (and get them right) has forced companies to think differently.

Two things have really driven this state of constant change from the broadcaster’s perspective (though I’m sure there are more). First, there is the increase in formats and second, an increase in the number of deliverables (or screens).

The codec or format scene has exploded over the last 10 years. I remember when DV came on the scene and it was regarded both as a savior and an intruder. A savior for smaller markets because the quality was high and format inexpensive enough. An intruder to those that weren’t ready to abandon Betacam and other 4:2:2 tape based formats. Today, we see Premiere Pro supporting AVCHD, AVC-Intra (all), DSLR (Canon/Nikon), DV, DVCPro50, DVCProHD, HDV, RED R3D, XDCAM EX, XDCAM HD (35 and 50mbit), with room and presets to support things like iPhone video and more. In fact, Adobe Premiere Pro CS5 is a resolution independent engine that can support just about anything that is on the system with frame sizes in excess of 8K or twice of what the RED ONE camera currently does.

The number of file types or destinations that a media company or broadcaster has to prepare for has likewise multiplied. Back in the day, they had to worry about getting the file (or tape) played at their NOC (Network Operations Center) to put it on the air and view it. Now, in addition to the web, there’s the growing idea of getting the content out to mobile devices. Talk about challenging! Adobe has talked about creating content once and being able to distribute it to many screens. We believe that customers expect to be able to view media at anytime, anywhere and on any device. When you consider Flash video’s penetration on devices, it’s transparent user experience and it’s ability to deliver to both online and mobile devices, it seems that Adobe has a good solution for broadcasters. Many companies like ESPN have recently updated their online viewing experience and they chose Flash simply because it was the best solution out there. And of course, one conspicuous handset aside, there are hundreds of millions of Flash enabled handsets and devices that dwarf anything else that’s out there. 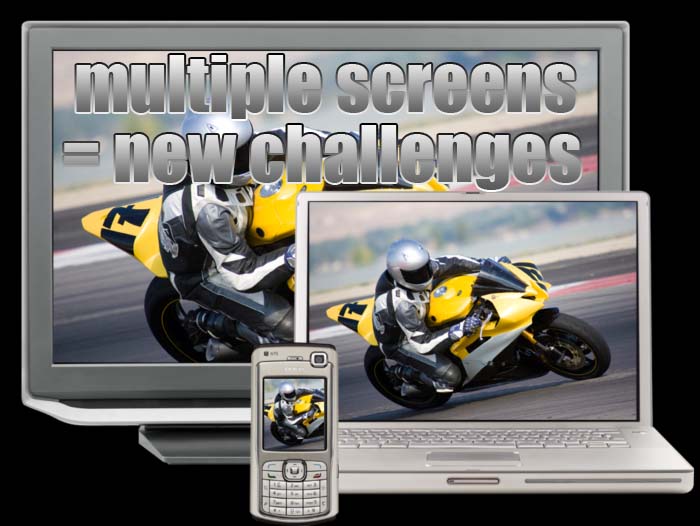 Media has to get out to those three screens fast! Of course, that’s most important in broadcast news, but I’ve seen shrinking staffs and increasing work loads for as long as I’ve been in this business. One executive has told me in the past that they’re a ‘sausage factory. We have to get the sausage out as quickly as possible.’ With reduced staffs, tighter deadlines and higher demands on quality where do you turn? The answer from most broadcasters is in creating greater efficiencies in their workflows and using tools that will help them realize more media in less time. That’s been a core strength of Adobe for some time. With Dynamic Link and tightly integrated workflows, you can get your work from point A to B more quickly with less down time than anyone else out there.

One final issue that I will mention is integrating systems between different vendors. Simply put, Adobe helps people create the content, but it doesn’t help them manage where it is, when it should be deleted, where should it go for broadcast, which server will play out the file, etc. Clearly, there are ways to get from point A to point B, but many times, they are inefficient and increase the chance that something can go wrong. Integration with 3rd party vendors has been something that Adobe has worked on for a couple of years and I think will explode over the next couple of years through our Flash panel integration that will allow vendors to integrate their functionality and interfaces directly into products like Premiere Pro. 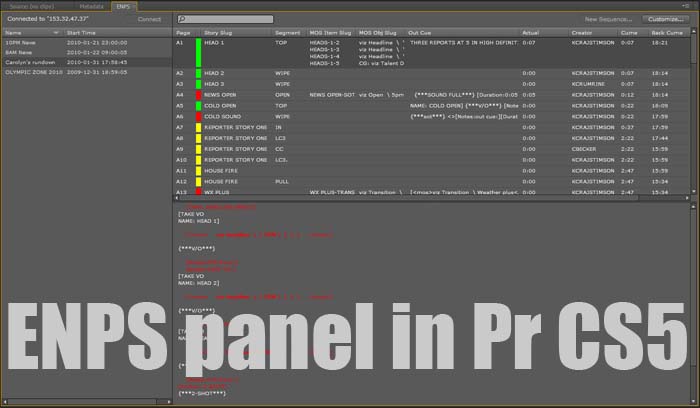 There are so many more challenges and issues that I could cover but will forgo for now. In the next part, I will offer some conclusions and statements for consideration. Right now, I see broadcasters adopting a greater portion of Adobe’s Production Premium CS5 toolset that started all the way back in CS3 and expanded during the CS4 cycle. Am I right or am I missing something? Let me know.