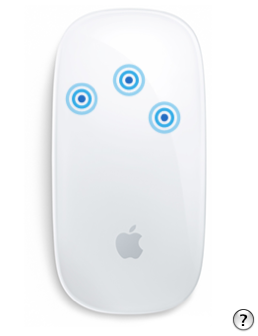 A few weeks ago I wrote a review of the new Apple Magic Mouse and using it with Final Cut Studio. There’s now a little 3rd party application called MagicPrefs that adds even more functionality to the mouse.

MagicPrefs is a “free menubar application for OSX which aims to improve the functionality and configuration options of the Apple Magic Mouse.” It’s not a system preference pane but rather a little application that runs in the background. I immediately saw that it added a functionality that I greatly missed: Expos©. Two of the most used functions on my old Mighty Mouse was the middle-click for revealing the desktop and the side squeeze for revealing all windows via Expos©. MagicPrefs gives that back.

The app works by mapping one, two, three and four finger clicks and taps to new functions. You can set these things to several different commands: 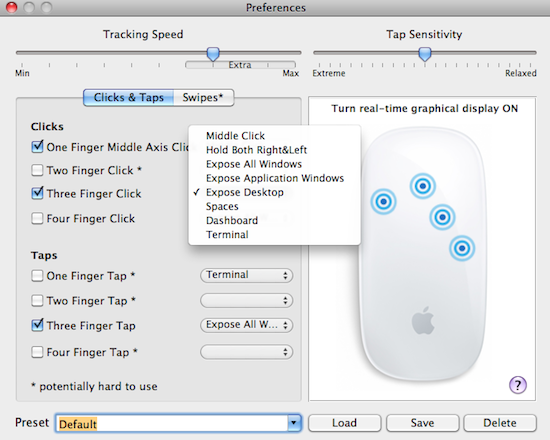 To open the preferences for MagicPrefs just click the little mouse icon that it adds to your menubar:

There’s also the abilty to save your own presets and to adjust the tracking speed and tap sensitivity. To me this shows that there’s even more potential for the touch surface of the Magic Mouse. MagicPrefs has a tab for Swipes as well but as of this writing there’s no functionality for swipes but that shows where the developer is going with this. You’ll notice that the window above says “One Finger Middle Axis Click.” It looks like they are trying to emulate a middle mouse button with this option but I was unable to get it to operate in Color like a middle mouse button traditionally works.

But overall MagicPrefs makes the Apple Magic Mouse a bit more functional. It’s free but the developer does have a PayPal donation link so if you find the app useful then pass along a donation of thanks.