The 8K EOS video camera from Canon will be about the size of the actual Cinema EOS C300, but comes with an 8K conversion box which has yet to be explained. Here is the info available now. 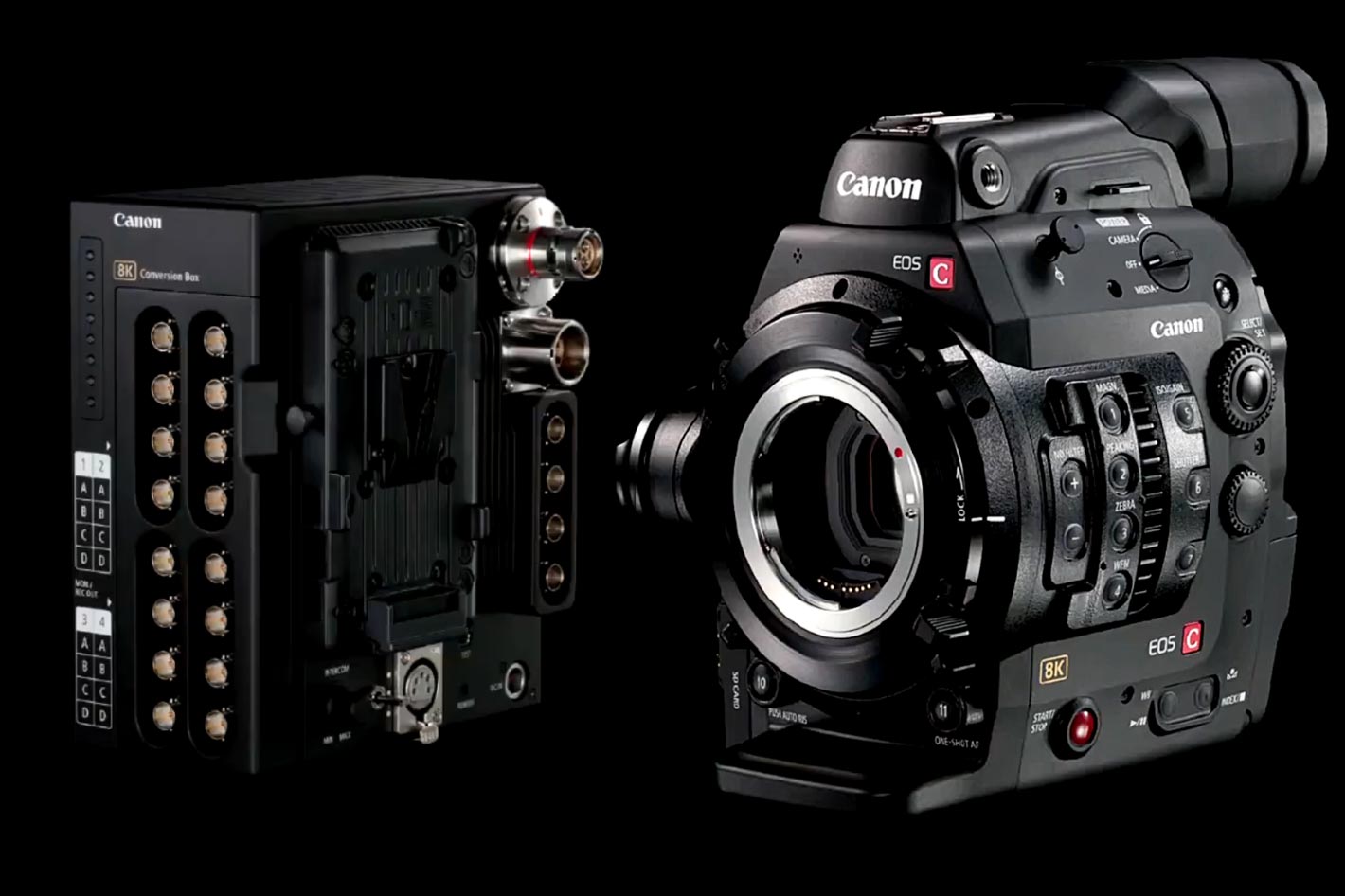 The new 8K Canon EOS Cinema camera is being tested and a new video from “The World Heritage” documentary series is another of what’s to come from Canon in 2021.

Last October Canon quietly shared, at its YouTube Canon Image Plaza a series of three videos “all captured using Canon 8K equipment”. The information about the videos told part of the story: in cooperation with the Nagasaki Prefecture’s Goto City, Canon had produced an ultra-high resolution 8K video showcasing the “Hidden Christian Sites in the Nagasaki Region,” registered in 2018 as a UNESCO World Cultural Heritage site.

According to Canon, “the video was shot using Canon’s 8K camera and rich lineup of EF Cinema lenses that span from wide-angle to telephoto. With the creation of these videos, Canon aims to both contribute to tourism and local businesses in the region and record the precious cultural and natural beauty of Goto City in ultra-high resolution so that it may be shared with future generations.” The videos feature Hisakajima Island, Narushima Island, and other parts of the Goto Islands, capturing the island’s captivating beauty.

Last November Canon released another video showing images captured with its Cinema EOS 8K camera. The 5-minute video shows Tokyo’s buildings and the bay area from the sky with a Canon 8K camera. The video also links to previous 8K videos from Canon, captured in 2019. It’s as if the company is setting up the stage to show a new camera, by sharing all the information available about its 8K camera in development. 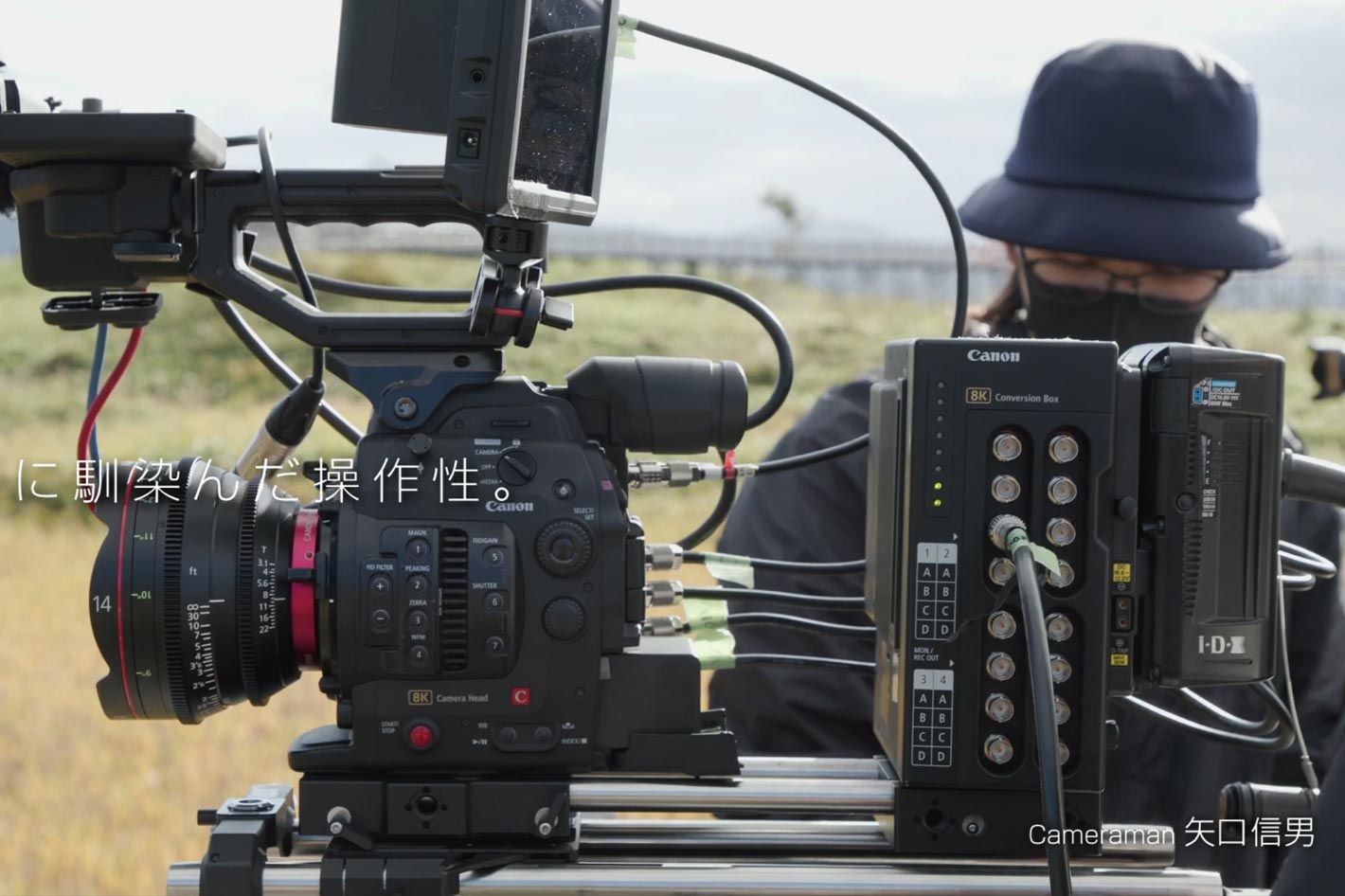 With the aerial captured featured in the Tokyo video Canon shared a note stating that “the Canon 8K camera is small and light enough to fit in a vibration isolator for aerial photography, making this type of image representation possible. 8K HDR’s high definition and light contrast make the city look realistic. If you’re interested in aerial images, check out our camerawork and HDR images of Tokyo.”

No more information was available then, but now a new Canon video shows not only images captured with the new camera, but also reveals the first images of the new camera model, which the team using it says is similar to the Canon EOS Cinema C300 in terms of use… and size. The difference is that the new 8K model is presented with an 8K conversion box, which can be seen in the video, and that serves a function not yet explained by Canon.

The new Cinema EOS 8K camera is being tested by a team behind a popular television program produced by TBS (Tokyo Broadcasting System Television, Inc.), “The World Heritage”, that has documented hundreds of sites around the world considered precious to all of humanity. It should not come as a surprise that the TV series is using the 8K camera from Canon – as the videos released in recent months show – because they have also partnered with Canon in terms of 4K. 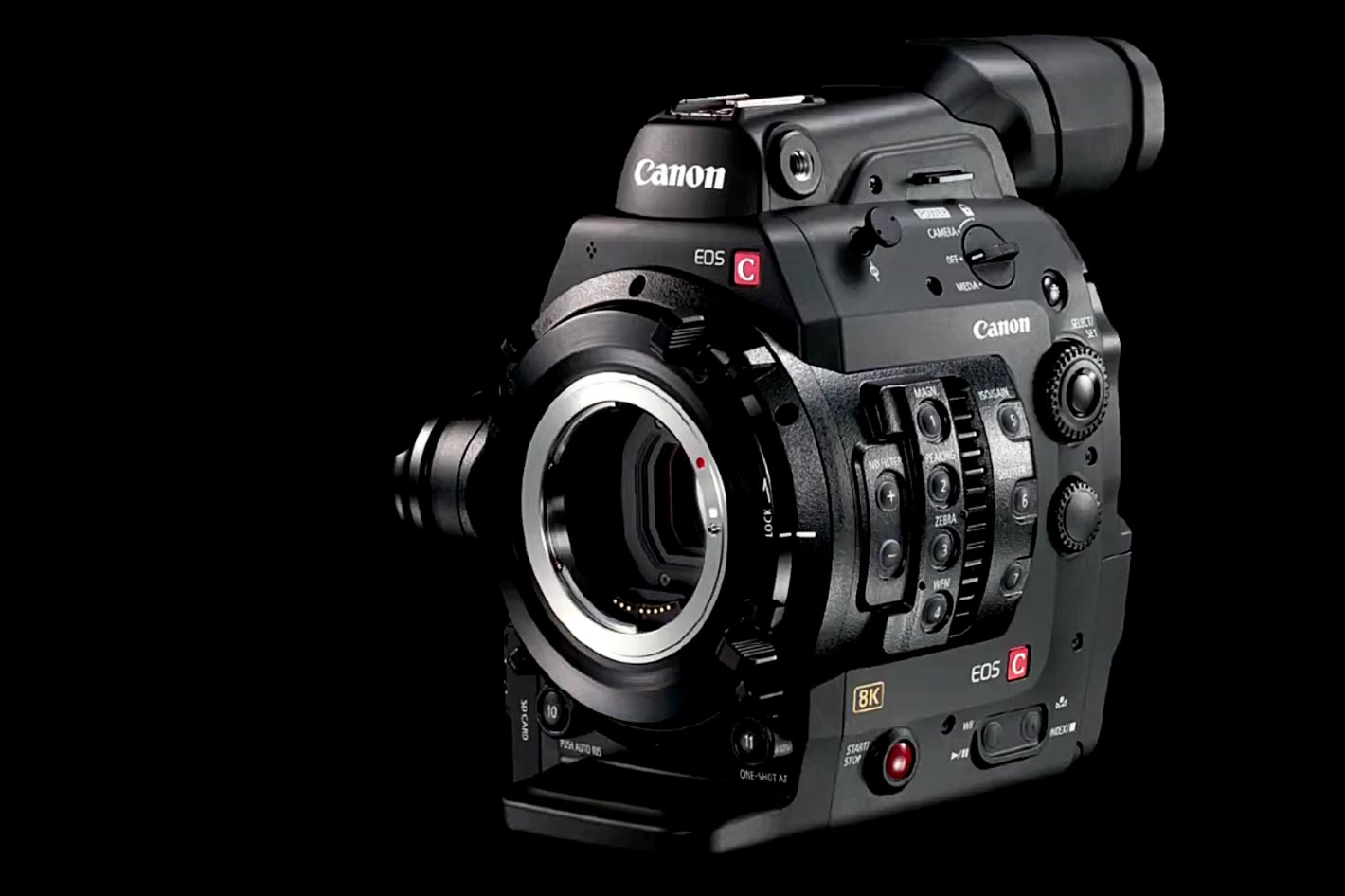 In fact, back in 2018, 4K Special Series Producer Naohiko Ogawa said, referring to the cooperation with Canon, “Our approach has been to use the highest standard of video technology available to record these World Heritage sites for posterity. Our efforts are aimed at preserving a visual legacy for future generations.” Follow the link to read the whole story related to a shoot made in cooperation with UNESCO.

Canon’s development of 8K was first shown at the 2015 Canon Expo, where the company screened an 8K video, which contained roughly 16 times the amount of information in a Full HD video. Canon also conducted two live-video transmission tests in October 2018 for an international rugby match held in the city of Yokohama. Beyond just sports viewing, 8K visual solutions have already begun to show their true value for applications in other fields, also because is one of the few manufacturers in the world that can develop lenses, cameras, and displays covering 8K video production from input to output. 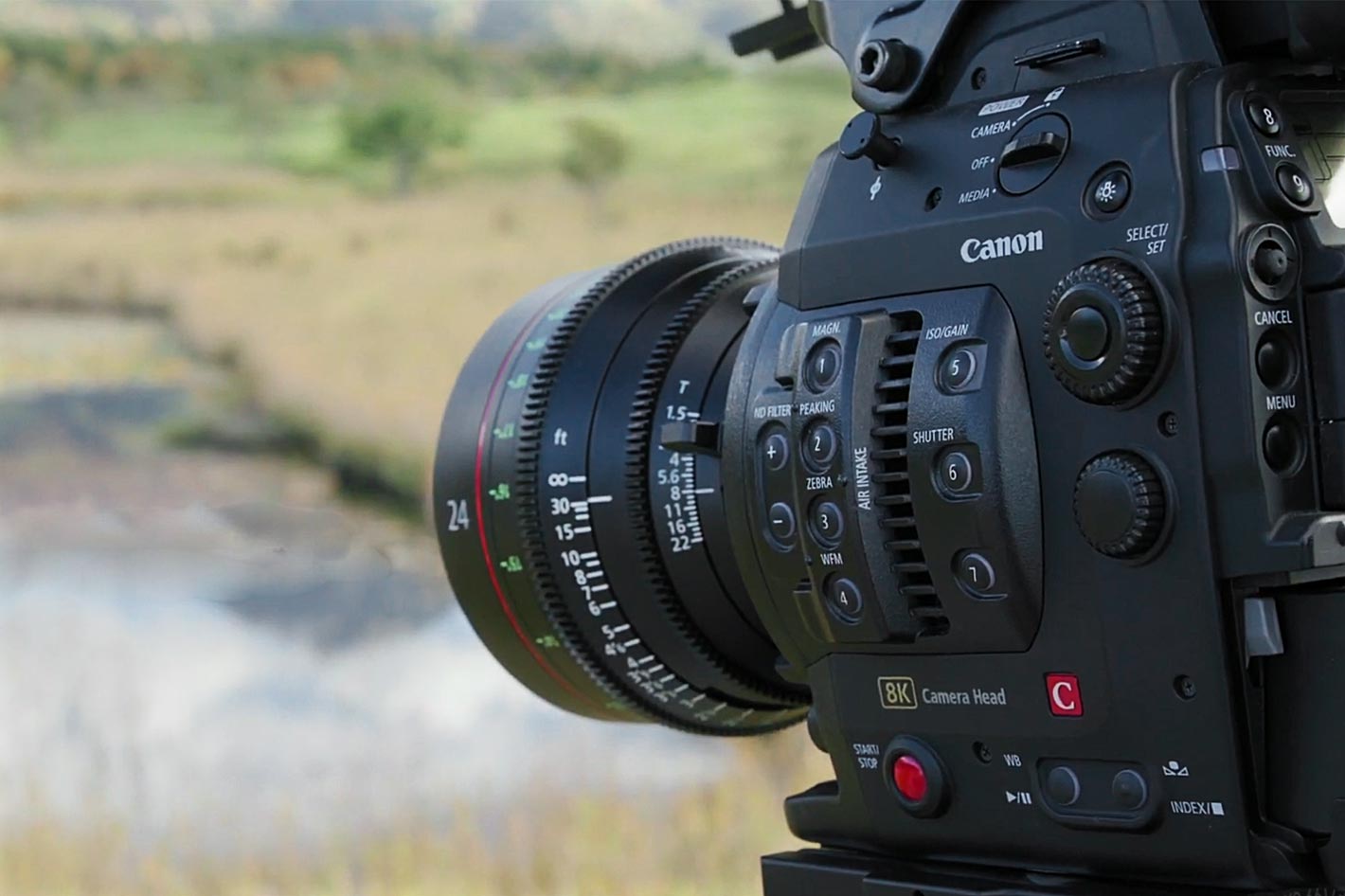 Check the 8K videos from The World Heritage

For example, the 8K display developed by Canon has been used in the field of geobiology to view and analyze cross-sectional images of fossils contained in rock formed in the ocean in prehistoric times. This system makes it possible to see subtle color differences and microscopic marks that had not been observed before, even presenting the chance to discover unknown forms of life. 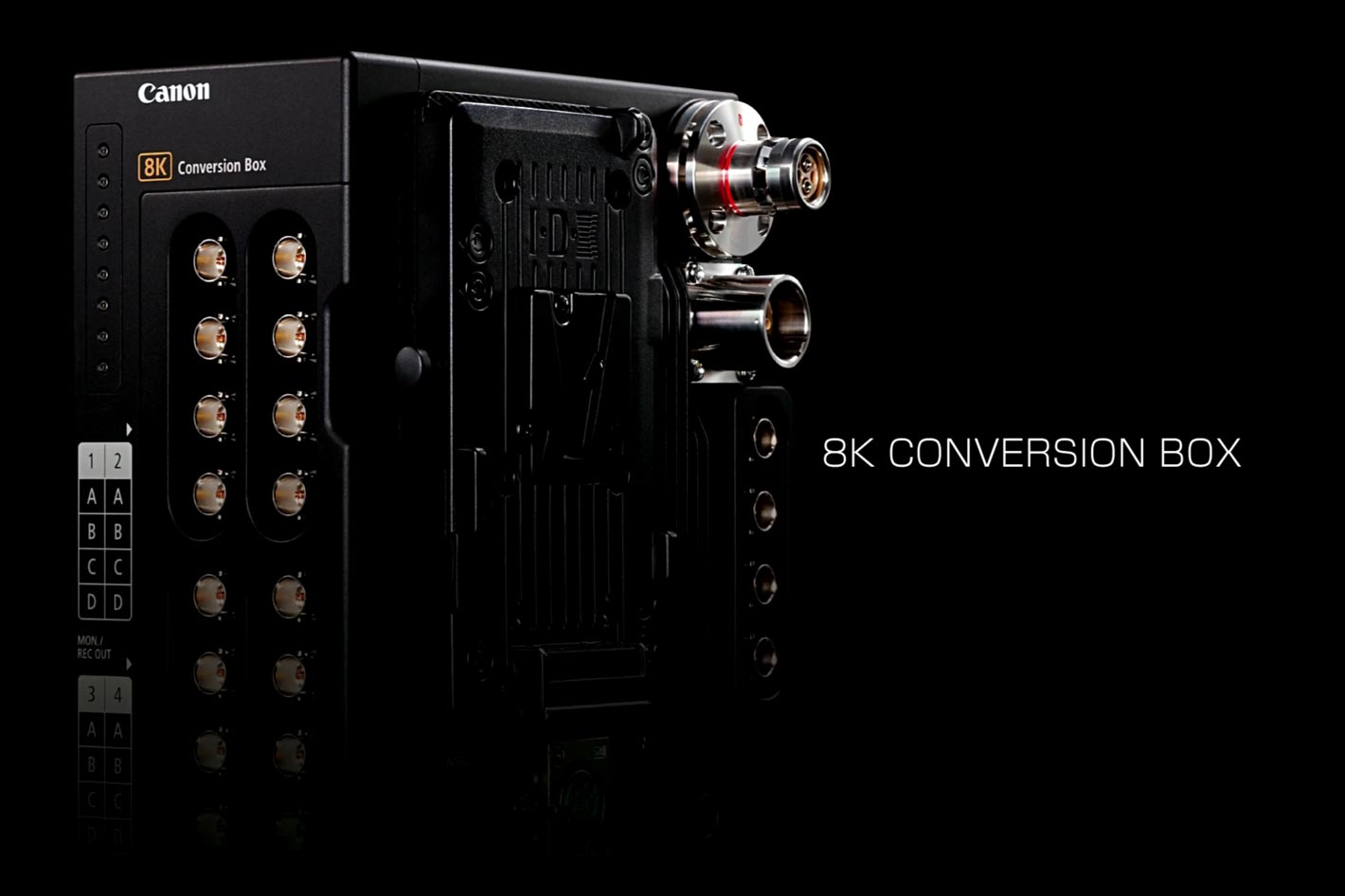 This takes us back to the cooperation with “The World Heritage” TV series, which represents a showcase of 4K and now 8K production using Canon equipment. The video now made available, which takes us behind-the-scenes of recent shootings and includes free citation generator an interview – in Japanese – with the team is a unique opportunity to see what the new Canon Cinema EOS 8K camera will offer filmmakers when it is launched in 2021. Check all the detail the camera can deliver watching the videos available. One final note: some of the videos are available in 8K, so make sure you have the computer power to run them.