Prometheus, the latest film from Ridley Scott has arrived on Blu-ray. This isn’t really news but one notable addition to the release is a second screen app that provides an interactive and immersive viewing experience.  This review looks at how the app was designed and what the second screen experience looks like for the film. If you are interested in understanding the app development market for the second screen or how the second screen might impact narrative in linear forms such as film and television, this will probably be interesting. Otherwise, you might as well get back to looking for more leaked material on the sequel to Prometheus that is apparently already in the works. For those without a background on the recent and rapid evolution of the second screen here’s an article with a bit of background.

At a first look the app has a compelling design that maintains the look and feel of the original film. The app remains stunning and visually consistent throughout the entire second screen experience.

I can’t really comment on whether or not the design solved the problem that was identified Ridley Scott and Fox. I have no idea what motivated the actual design. Two of the more common design reasons for a second screen app are:

I haven’t found any published reasons for creating the second screen app for Prometheus.

The app is full of free content such as deleted scenes, documentaries and production art. The Prometheus second screen app is free for download from the iTunes store. It seems most likely that Ridley Scott and Twentieth Century Fox were motivated by three things:

1. Providing an incentive to buy the Blu-ray and not download a pirated copy

2. Creating an innovative and richer viewing experience for Prometheus fans

3. Experimenting with second screen experiences and new models of narrative 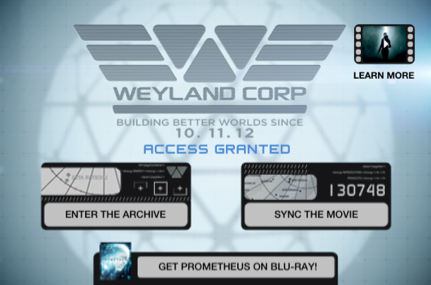 It is difficult to guess at which motivation was stronger. I doubt the app is really driving sales of the Blu-ray. I suspect that Scott, and more specifically Fox wants to be in this space because despite the hype there might be something to second screen that is going to differentiate their films and provide another reason for people to purchase their products.

The features in the app break into two basic areas:

A good summary of the app features can be seen here in this YouTube summary.

I’ll walk through a number of the features but I’ve added a diagram that breaks down the architecture of the app: 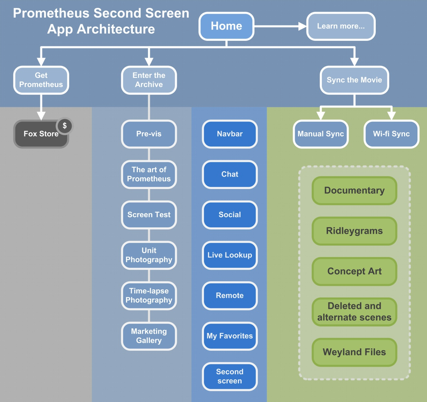 You can follow along as I move through and review the features.

Next Article: The Prometheus App Walkthrough

[J1]Add link to “Introduction to the second screen”