When the Blackmagic introduced the Resolve Editor Keyboard I was immediately intrigued by this unique tool purpose-built for editors. I tried to explain why while we were all still at NAB 2019. Once I got my hands on one for a proper review I still really liked what I saw and what BMD created. Did I buy one? No. I’m not doing enough dedicated craft editing in Resolve to justify the cost. At least not yet.

It wasn’t long after that review that I discovered there was another DaVinci Resolve keyboard when a package arrived on my doorstep containing a DaVinci Resolve 16 Keyboard from Editors Keys. This $128 keyboard is a full size extended keyboard with a dedicated keypad and all the F-keys you need. The keyboard is backlit and has “over 200 keyboard shortcuts” that run across a lot of the Resolve application. To make things easier to understand many of the tools are grouped by color.

Editors Keys keyboards are very high quality. They are well constructed and easy to type on. The backlit version has keys that are weighted heavy enough and produce enough resistance that they make typing just enough work to make it satisfying. A few years ago PVC had an article about the Editors Keys backlit editing keyboards that go into detail about their keyboards so I won’t go into much of that here.

But don’t you advise against using color-coded and pre-printed “editing keyboards?”

Yes, for the most part, I do and I even did a talk on the NAB show floor a few years ago that centered on using a generic keyboard. But I am beginning to soften on that a bit. If you’re brand new to Premiere Pro or Media Composer or Final Cut Pro X or even Resolve and you want to become very fast at editing on any and all of them my advice is to still use an unmarked keyboard, learn the shortcuts, commit them to memory and then modify shortcuts to your liking.

Resolve is a bit of an anomaly when it comes to keyboard shortcuts. Resolve is not a traditional video editing application that added other features like audio mixing and color correction to the same basic interface. Resolve is several, very different, applications that come together in one super app. Final Cut Extreme anyone?

With so many very different pages to work in while using Resolve, you’re presented with a lot of different keyboard shortcuts. Some of those shortcuts work from page to page to page. Things like copy/paste work no matter where you are. Other shortcuts might work on one page but not the other. I’m currently thinking about the keyboard shortcut to adjust clip volume as it works on the Edit page but not the Fairlight page (unless they’ve fixed this odd oversight). Go figure.

Resolve is a place where a dedicated keyboard can be useful. The $995 Resolve Editor Keyboard is incredibly useful on the Cut page and Edit page but not so much on the color page. If you are deep in Resolve for your color work but don’t have a full Resolve grading panel then the Editors Keys Resolve keyboard might be the one for you.

As mentioned above, I’ve been able to use the $128 backlit version of the keyboard. It’s easily become my favorite keyboard beside the old Apple USB chicklet-style keyboard (I still find that one to be the perfect typing surface) which is named the Apple Aluminum Wired Keyboard according to this website. Typing on it just feels right and as much as we like to talk about editing all the time unless you’re system is truly dedicated only to editing you’ll also be doing a lot of typing. There are email and social media and writing proposals and lots of other things.

Color coding to help with all the Resolve commands

One thing I like about this keyboard is the colored shift, option and command keys.

They are blue, green, and red respectively and those colors are used on the various keys to know what modifier (or combo of modifiers) needs to be pushed in order to perform a Resolve action. Most keys also have symbols that correspond to different Resolve tools and modes. But what was the really tricky thing here was to adapt an application as feature deep as Resolve to one keyboard. That means properly using this keyboard will take some study.

Here is a nice discovery from using this keyboard:

Using the ; and ‘ keys takes you to the first frame and last frame of the clip where your playhead currently sits. That is very handy and unlike the up and down arrows keys which move to you the previous edit point and next edit point. If you want to stay on the same clip and not move one frame into the next clip use those ; and ‘ keys.

This makes me wonder what is going on with the Resolve keyboard editor. It’s not even showing anything on the ‘ key. 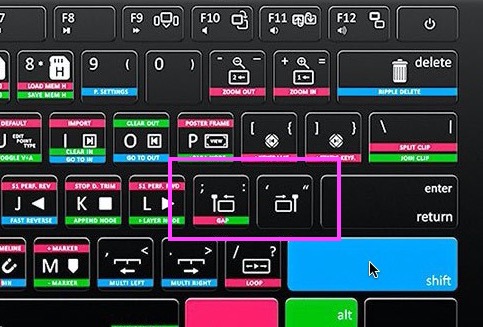 Here you can see the ; and ‘ keys on the Editors Keys keyboard. Clearly that ‘ key does something! The Resolve keyboard editor needs an overhaul.

You may discover printer lights

If you’re unfamiliar with printer lights in Resolve then you’ll probably wonder what the odd colored triangle keys are on the extended keypad. 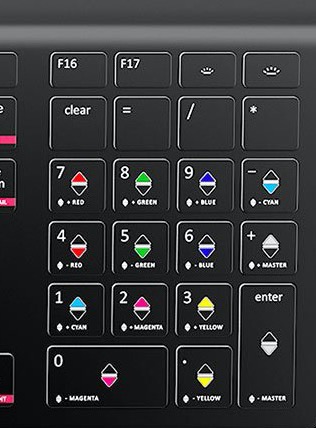 Those are printer lights and are another option for grading your clips in Resolve. Depending on which key you press you might be adding a little more green or a little less green. It’s a fast, non-mouse way to do some grading. I would greatly suggest watching your color wheels when using printer lights to see exactly what is going on as you experiment with them. Honestly, they are a top reason to use this keyboard.

Why no USB ports?

One thing missing from this keyboard are a couple of USB ports. I’ve come to expect any wired keyboard to give me a couple of USB ports. This is especially annoying since I still use a Resolve Studio dongle to license my copy of Resolve. I’ve been using this keyboard at home with a 16-inc Macbook Pro so that means all USB-C ports and a lot of things attached. Between hubs and drives and Stream Decks and Loupedecks or TourBoxs I don’t seem to have a lot of USB ports to spare so I like to keep this Resolve dongle plugged into a keyboard. I can’t this Editors Keys keyboard.

This isn’t a full review of the Editors Keys Resolve 16 keyboard, more of a quicktake like some of my favorite car magazines do.  In that spirit, here are a few things of note:

This is marketed as the “Resolve 16 Keyboard” so will it become obsolete as Resolve 17 comes along and Blackmagic continues to make fast improvements and changes to Resolve? Maybe.

You don’t really need any kind of dedicated editing keyboard with any NLE.

You can use the keyboard right out of the computer box unless it doesn’t have an extended keypad. While you can use a keyboard without a keypad you’d be doing wonders to your video editing world by getting a full-size keyboard. There are so many menus in Resolve and so many keyboard shortcuts I don’t think any keyboard can really do Resolve justice. It’s such a strange app because on the one hand there is the simplicity of the Cut page and the Quick Export button but then also the complexity of Fusion and enough preferences and menu commands you could go blind hoping to learn and understand them all. Trying to shoehorn a color-coded keyboard into the mix feels like an exercise in futility. Hell, even Blackmagic just concentrated on editing with their keyboard! I guess they expect you to shell out some serious cash for the keyboard and at least one of their color grading surfaces. Add on some Blackmagic audio hardware and you’ve got a big investment but also a powerhouse system that can literally do it all if you have the talent to run it all.

At $138 the Editors Keys Resolve 16 backlit Keyboard isn’t the cheapest extended keyboard you buy but it’s well within the price range for a high quality, backlit keyboard. The construction is good, the typing feel is superb and if you really feel like you need the crutch of marked keyboard keys then you can’t go wrong. You might confuse yourself if you have to jump between NLEs but I did just that with this keyboard so it will keep your brain on its toes. If you don’t want a dedicated editing keyboard but need a new high-quality extended keyboard then I don’t think you could go wrong with the Editors Keys Backlit keyboard, for PC or Mac. It looks to be the same quality, priced at $110. Sure you could find a cheaper keyboard but I think there’s something to be said for supporting a company dedicated to creating great products for our post-production world. Editors Keys is doing just that.