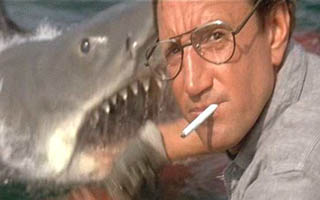 The best scene in the 1975 film classic “Jaws” is when Chief Brody first sees the shark. I know you remember. He’s at the back of the boat laying a chum line when the monster comes up right alongside the boat, opens its enormous mouth and swims away. Actor Roy Scheider’s look was perfect as he jumped and moved away from the edge, and the script was even better: “We’re going to need a bigger boat!”

This “bigger boat” revelation is one that’s also occurring with a few media companies as they begin see the enormity of the disruption to advertising that’s taking place. Yes, disruption toadvertising, not content. Most executives simply point to the economy and expect some form of return when it gets better, but that’s a very dangerous view of what’s really taking place. Advertising isn’t just shrinking; it’s completely transforming, and with the transformation is coming a blooming irrelevancy for media companies who just “serve” ads. It’s going to consume those who don’t see the size of the problem. Simply put, we’re going to need a bigger boat.

This kind of talk generally brings about the rolled eyebrows, coughs and guffaws, because there’s still a great deal of money being spent on traditional brand advertising. These executives are happy with the present and view their mission as milking it for every possible dime. There’s nothing wrong with that, but the extent to which it becomes ouronly focus is a trap, for two very powerful forces are at work that will change everything.