As part of the transition of That Post Show into That Studio Show, our own Scott Simmons will be hosting PVC-themed episodes from time to time, where he’ll talk with the author of an article that appears on PVC to explore further details. In the first of these episodes, Scott talks with Arthur Vincie about his recent piece, Surviving Your First Film Market. In it, Arthur takes us through his experience at his very first American Film Market and shares details about the process and what he learned.

In the podcast, the guys discuss expectations and realities around film markets, and it’s very interesting to hear just how essential the human element is in every aspect of the industry. People don’t want to work with anyone they can’t trust, and those feelings can be established one way or the other in something as small as the way they get pitched to the clothes someone is wearing.

It’s also poignant to hear Arthur say he knows plenty of extremely talented filmmakers who aren’t where they want to be because they didn’t or haven’t figured out the distribution side of the business. He’s not saying he has all the answers, but being able to take an active role in the “business” side of things is becoming more and more essential. His learning expereinces as he goes through this process can be critical pieces of info for others.

All of that plus the first question film distributors will ask, alternative film markets, what “business casual” really does or doesn’t mean and plenty more.

Listen to the show on Stitcher Radio

You can read all of Scott’s articles on his channel or connect with him on Twitter, while Arthur’s most recent film is Found In Time and his book on pre-production for the independent filmmaker is called Preparing for Takeoff. Arthur has also published Thinking About Extras and Thinking About Crew Prep on ProVideo Coalition.

During the month of September Art Adams rolled out a new entry in his 28 Days of Cinematography Insights... 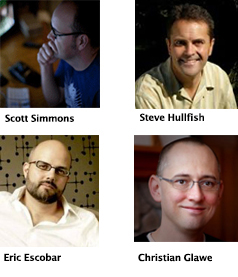 Eric Escobar speculated about where or not what has happened in the world of print will happen in the...

You don’t have to look too far into the PVC archives to find out what Scott Simmons, Bruce Johnson...