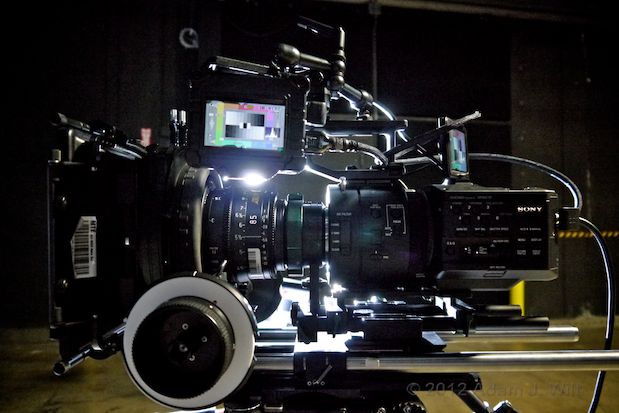 I took the FS700 into work and shot under various lighting conditions to see what would happen. I also swapped out my cheap Nikon lens adapter and support kit for an updated Hot Rod Cameras Tuner Kit (sliding baseplate, PL mount, and 15mm rod adapters).

I wanted to see how the camera would interact with a variety of lights, and shoot more comparative motion tests.

I expected to see interesting flicker with 60Hz overhead fluorescents, and I wasn’t disappointed; 240 fps and above showed very noticeable flicker. I was more surprised to see that our Kinoflo Diva-lite 400 fixtures, which use high-frequency electronic ballasts, weren’t immune from flicker at 480 fps and higher; likewise our Arri HMI. Samples in the video; I’m sure you’ll find it amusing. 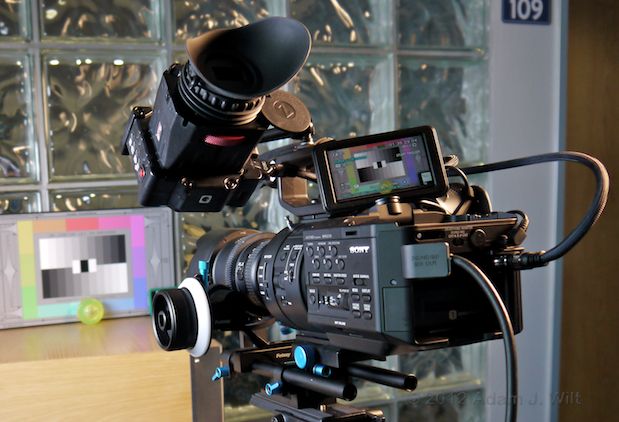 I also hooked up my Panasonic BT-LH1700 17″ SDI monitor to take advantage of its built-in WFM for setting levels on the DSC Labs Chroma DuMonde chart. I am happy to report that both the FS700’s HDMI output (feeding the Zacuto EVF) and the HD-SDI output (feeding the Panasonic) can be used at the same time.

After the Kinoflo test, I swapped my Nikon stills lens and its support kit for an updated Tuner Kit from Hot Rod Cameras, so I could attach Arri PL-mount glass. The Tuner Kit is similar to the one I used on the FS100, but with much-improved sliding baseplate: it uses a quick-release clamp to grip the rods, instead of being held captive between the front and rear rod mounts. 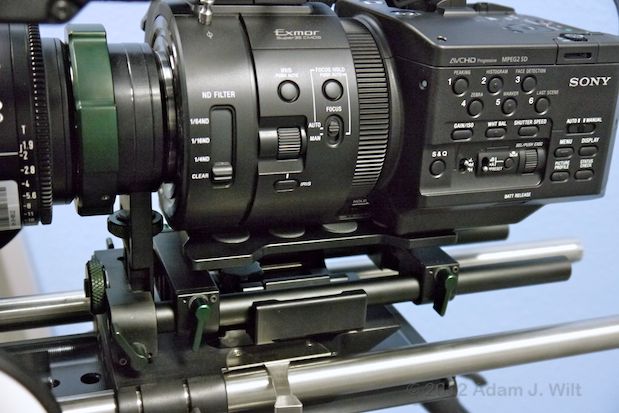 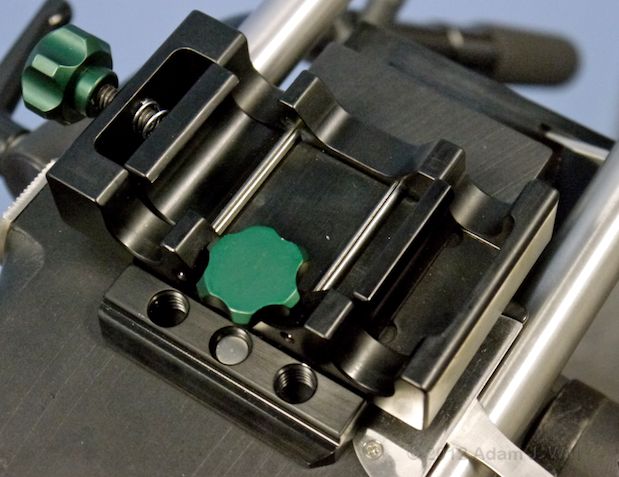 The Tuner Kit’s quick-release baseplate: loosen the green knob on the side, and snap the camera in or out of the baseplate. The center knob locks the lateral-shift slider.

This clamping baseplate lets you attach the Tuner Kit to the camera without the baseplate getting in the way, and it also lets you mount and dismount the camera from the tripod very quickly. The baseplate even includes a side-to-side sliding adjustment with a locking knob.

With this interface to the world of pro cine gear in place, I set up the camera in Studio B to test it with an HMI: 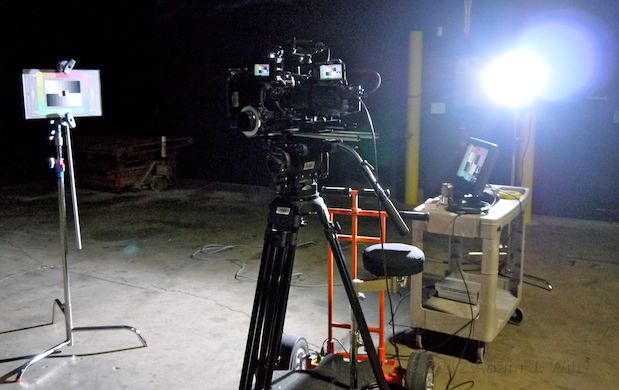 FS700 in Studio B. Note three monitoring points: the camera’s LCD, the Zacuto EVF (HDMI), and the 17″ Panasonic (SDI).

I then shot slo-mo close-ups of matches being lit, using the HMI as my “ambient” light. The FS700’s Expanded Focus feature came in handy for fine focusing on the match heads; the camera offers both a 4x and an 8x zoom, and, borrowing from the F65, it lets you pan-and-scan your zoomed-in area to focus on whatever part of the scene is most important. 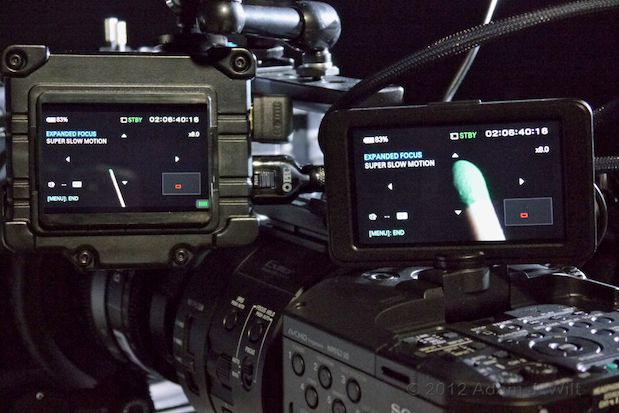 Expanded Focus only works on the FS700’s LCD; if you’re using a third-party EVF, you’ll get the screen overlays for Expanded Focus mode, but the image itself remains the full, unzoomed image. Another thing: as its predecessor did, the FS700 blanks all data overlays (aside from timecode) on external monitors if you turn markers on.

Oh, and did I mention that the FS700 has Cine Gammas? 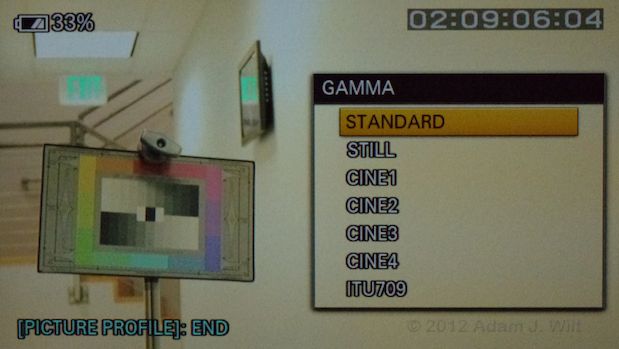 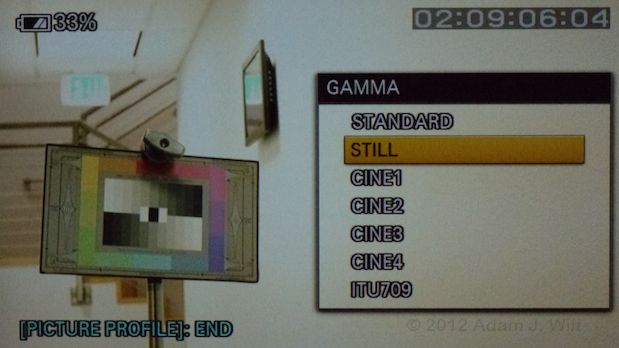 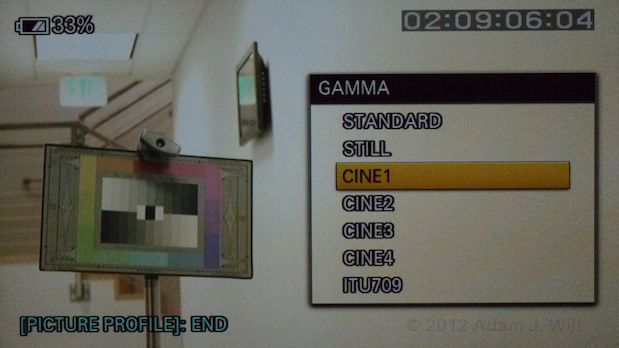 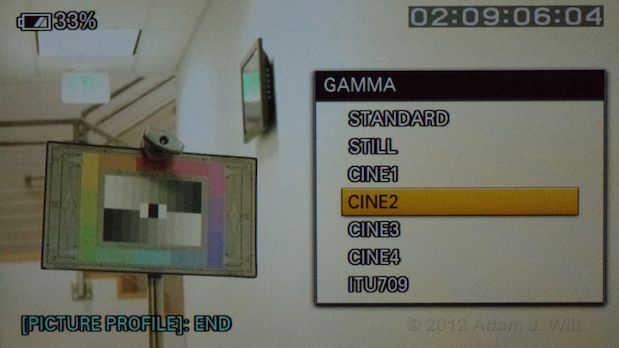 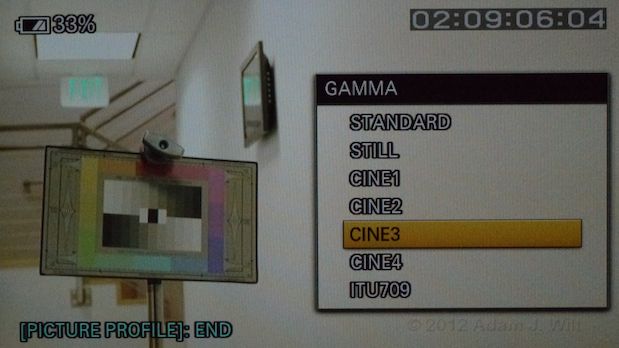 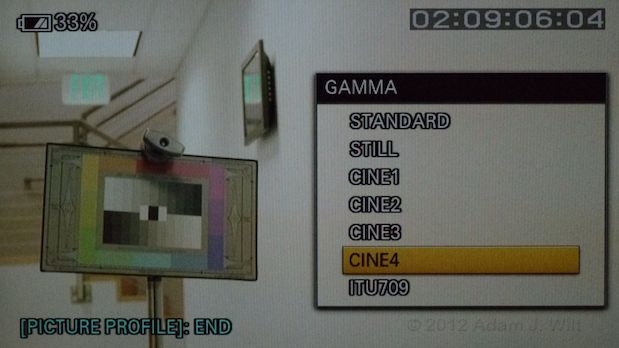 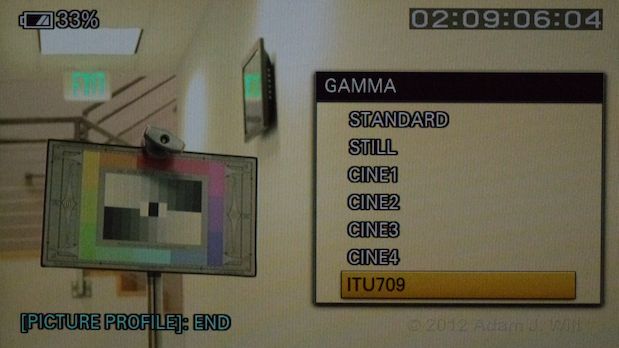 The chart tests in the video were all shot using ITU 709 gamma. The final shot uses Cine Gamma 4, which seems to hold the most highlight headroom with the smoothest rolloff.