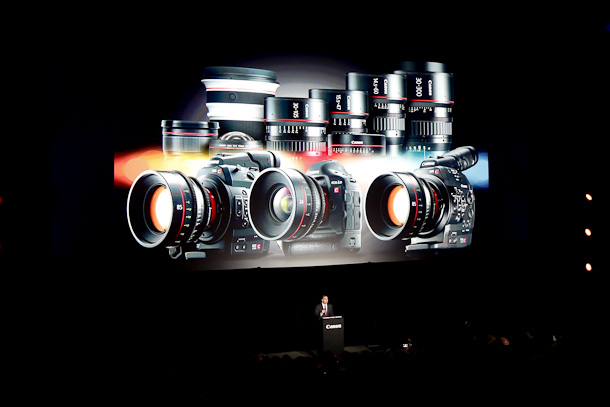 On the Sunday evening here at NAB 2012 Canon screened two short films shot with their upcoming 4K cameras, the C500 and EOS-1D C. The first short, The Ticket, was shot by Shane Hurlbut with the 1D C and the second by Jeff Cronenweth on the C500, Man & Beast. Both DPs were given a chance to speak afterwards about their experiences with the camera which was then followed by a technical presentation by Larry Thorpe. A few key pieces of information about these two cameras were revealed during the talk so let’s take a closer look.{C}

Before I delve right into this I want to pass on my initial impression of the footage that we saw during the screening. In a word the C500 was stunning, beautiful details were revealed in the Leopard which featured in the short film Man And Beast. Anyone who has had a chance to use a C300 will know that the footage is very detailed so it’s no great surprise that the C500 follows in it’s footsteps, some of the reasons for this will be apparent as I run through the details below. I was also very impressed with the EOS-1D C though, it certainly appears to be an easily capable b-camera on a C500 shoot, or any 4k shoot for that matter. Low light performance and tones captured in some very challenging lighting conditions were extremely pleasing. The camera has some physical design shortcomings, HDMI as an output and lack of decent audio connections to name just a couple, but it looks to deliver on the image side of things.

As I mentioned, Larry Thorpe offered a pretty technical talk on these camera and I won’t run through all of it, in fact I’m going to do things backwards and start with a summary and then if you feel the need to dig into things deeper then take a look at the slides and their commentary further down the page. 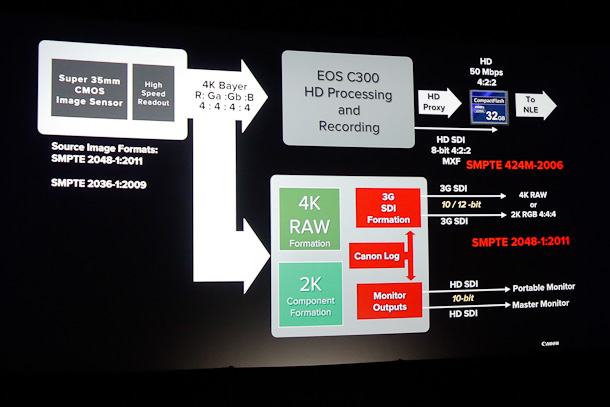 Some might remember that the C300 actually has a 4k sensor and in fact now we know that it is the very same sensor in the C500. This diagram explains the flow of date through the C500. 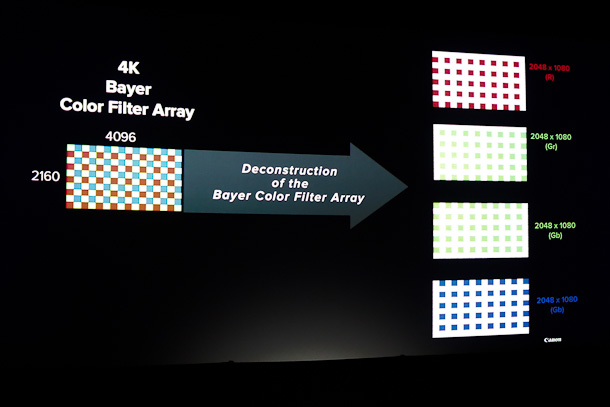 Here we see the construction of the Bayer array, just as in the C300 we have two green channels providing excellent accuracy for green screen work. 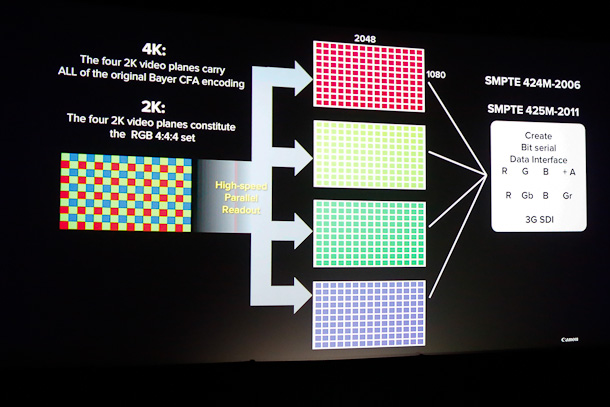 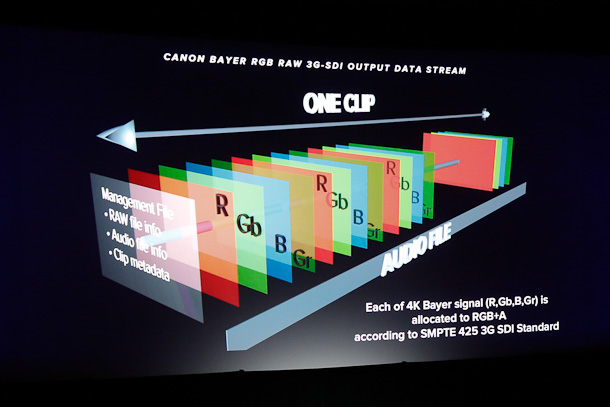 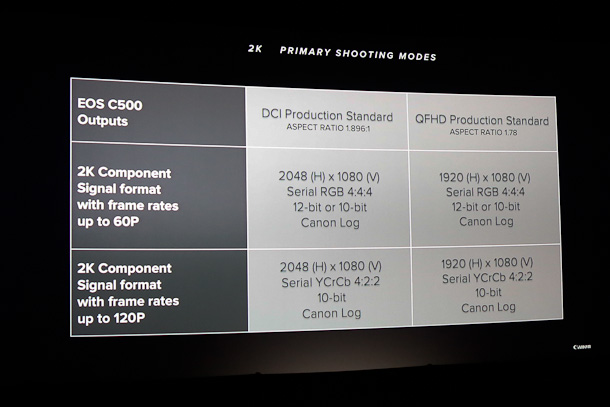 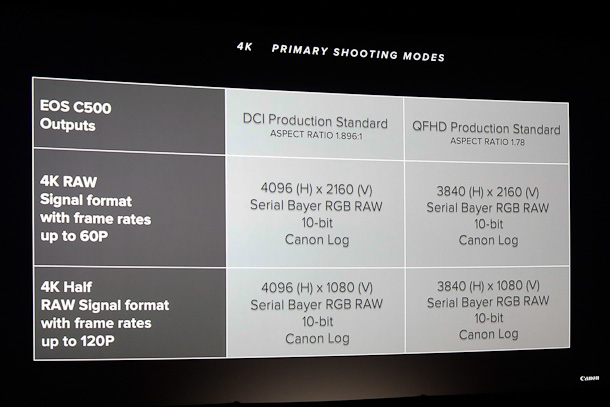 C500 4K Shooting mode specifications. In 4K mode a RAW 10-bit signal is available up to 60fps. If you wish to go up to 120fps an important piece of information was revealed in that the camera will only record a vertical resolution of 1080 pixels, what they are calling 4K Half , and the remaining information is interpolated from those pixels. Much like what Sony is doing on the new FS700 for their larger frame rates. 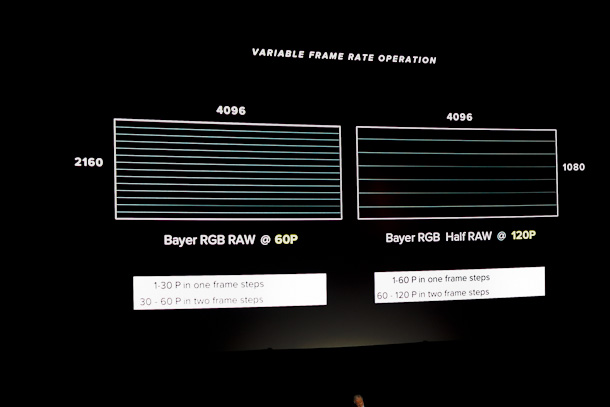 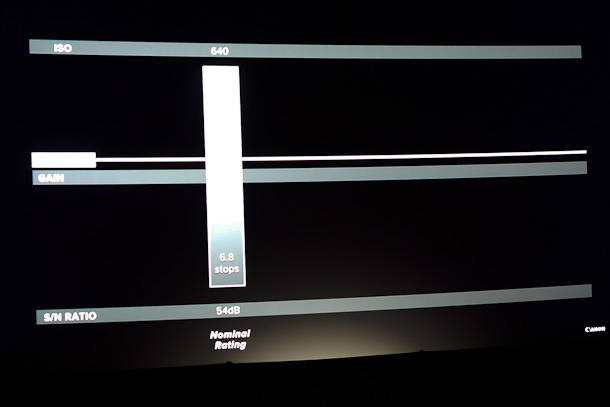 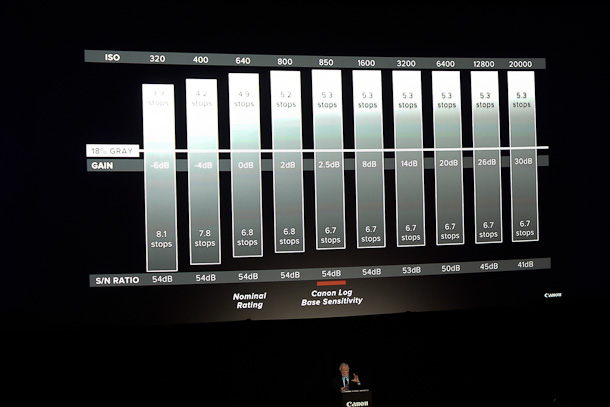 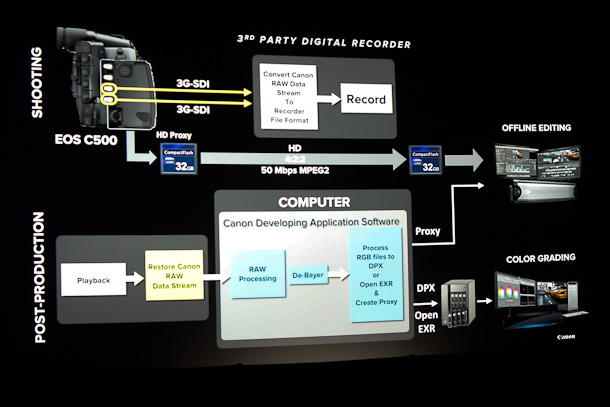 RAW data has to be recorded externally, I believe this is likely the result of an existing patent for in-camera RAW recording held by RED ? There has to be a reason why ARRI, Sony and Canon have gone with external RAW recording.

Canon worked with companies like AJA, Codex Digital and Convergent Design to provide RAW recording solutions. The AJA product features a Thunderbolt port and is on display in the Canon booth here at the show. More to come on this later.

One of the coolest features of this setup is the ability to record a proxy file on the CF cards while recording the RAW footage to the external recorder. A real time saver for dailies and faster proxy editing workflows. 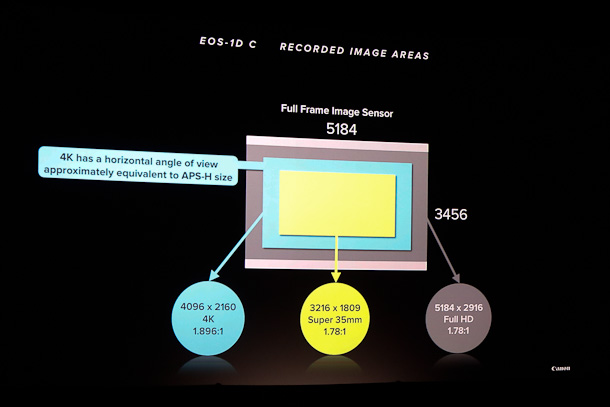 The EOS-1D C has three recording modes. When shooting in 4K it uses an area of the sensor equivalent to an APS-H crop, when it’s in full HD it uses the full width of the full frame sensor. Finally it also offers a super 35mm crop mode. 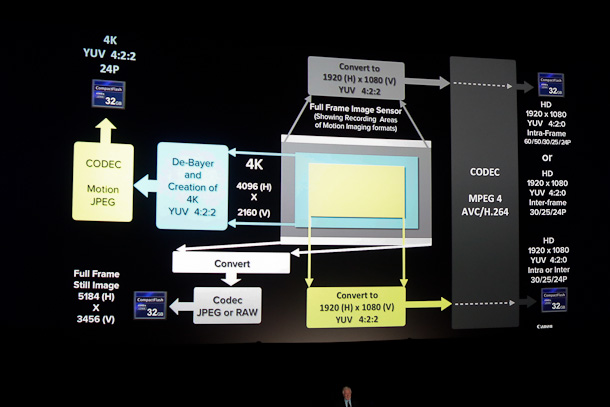 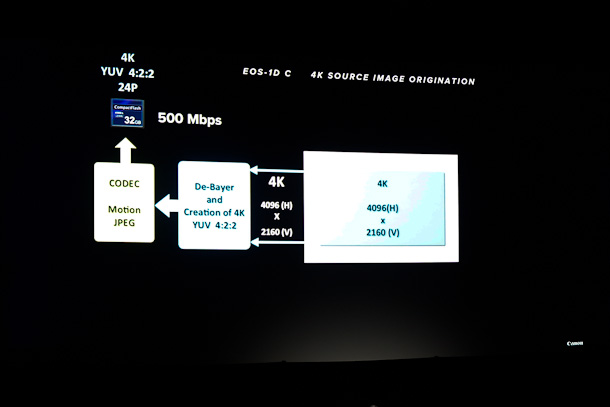 In 4k mode the 1D C records an impressive 500Mbps data rate to the CF card and about 90Mbps in full HD mode. 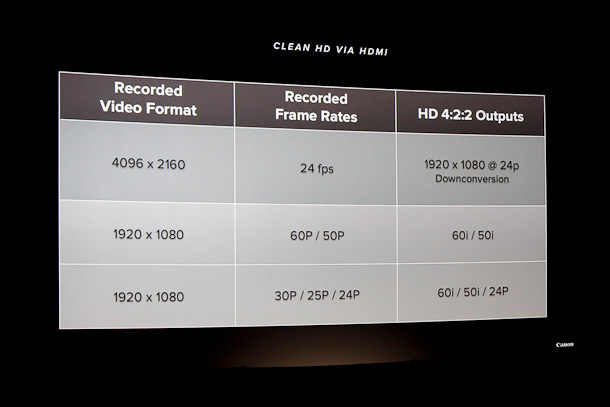 This final diagram shows the various frame rates available for on board recording and also streaming uncompressed from the HDMI. As you’ll see there is no 25p in 4K mode and it seems this is not something that is currently in development….. Worth noting as well is the 50i and 60i outputs in HD , only 24p.