As America’s involvement in the war in Afghanistan winds down, I think back to another long running war – Vietnam. It is well known Vietnam was the first war brought into people’s homes by television. But television proved useful going the opposite direction as well.

For the first time, for better or worse, network evening newscasts showed the war in progress in the world’s living rooms and in color.  Television’s coverage of the war is even said to have contributed to ending it.  When CBS Anchorman Walter Cronkite brought his story home from Vietnam and went on the air to say the Vietnam war was a stalemate in 1968, President Lyndon Johnson was famously quoted saying “If I’ve lost Cronkite, I’ve lost middle America.”

However, American television was also being delivered to Vietnam.  For the first time troops in a war zone were provided their own television programming.  Needless to say, the communications landscape in 1970 was much different than it is today.  Besides what we now call ‘snail mail,’ the only way to stay up on what was going on back home was the military broadcast outlet – The American Forces Radio and Television Service (AFRTS).  In Vietnam this took form as the American Forces Vietnam Network (AFVN).  Headquartered in what was then known as Saigon, it is where I spent a portion of my time in uniform. 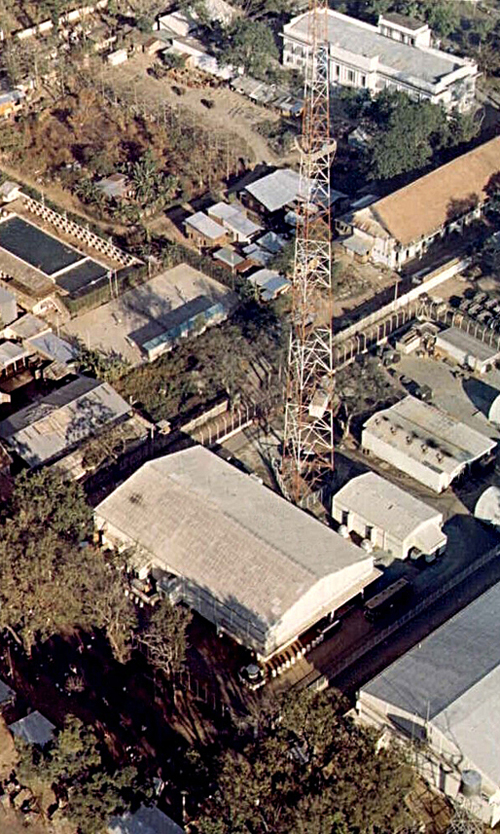 In 1942, early in World War II, the U.S. Government saw a need to provide a morale booster to personnel serving overseas as well as an efficient way to communicate with the troops and keep them informed of military activities (called Command Information).  It became known as the Armed Forces Radio Service (AFRS).  Los Angeles was selected as headquarters for the new service to take advantage of its proximity to talent and mass recording facilities.

Prior to Vietnam, the military had only dabbled in television.  Radio remained the conduit until shortly after the Korean conflict, when in 1954, the Air Force began adding low power television facilities at remote bases to provide entertainment to personnel.  Before long, the “T” for television was added and AFRS became AFRTS.

American forces became involved in Vietnam in 1962 and American Forces Radio quickly commenced operations.  As a military population drawn from a generation weaned on television rapidly grew, the Pentagon saw value in deploying a television infrastructure.

First, three aircraft called the “Blue Eagles” arrived in Vietnam in 1965.  They were Navy C121 Super Constellations outfitted as complete television and radio stations including a film chain and full size quadruplex video tape recorders (VTR’s). They even included a small studio! 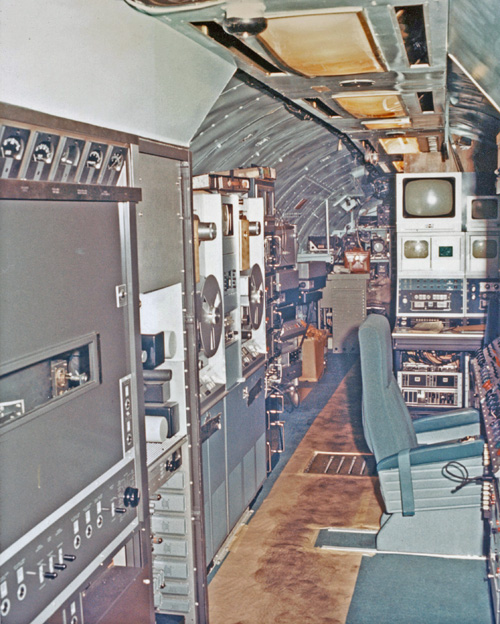 Engineers experimented with several different antenna configurations.  One set was attached to the belly of the aircraft.  Another stretched from the tip of one wing to the tip of the other wing via the tail.  There were also three booms attached to the top of fuselage.  But the most interesting antenna was the one that hung down from the belly of the aircraft.  It would be let out by a winch after takeoff and then be drawn back before landing. 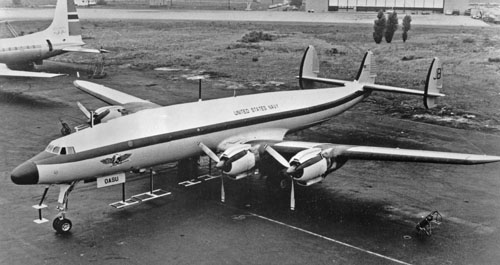 In 1966, The Blue Eagles gave way to a permanent facility completed in Saigon that became the network’s headquarters and key station. The Saigon unit had facilities rivaling any American mid-market station of the era.  RCA International Service Co. built the facility and, at the same time, also outfitted Vietnam’s first state television outlet, THVN, almost a mirror image of the AFVN facility.  Both stations were in the VHF band.  THVN transmitted on the old analog channel 9 and AFVN on channel 11.

Concurrently with Saigon, seven “up country” detachments working out of tactical production vans came on line.  The vans were TV stations on wheels, much like a remote production truck on steroids.  The units had to accommodate a working area for the staff, a studio, a transmitter and a collapsible antenna.  All of them also operated on Channel 11.

All AFVN television outlets met U.S. broadcast specifications – 525 line, 30 frames per second, 60Hz power per an agreement with the Vietnamese government.  In Saigon and at most of the detachments, the AM and FM radio counterparts were co-located in the facility.

Personnel from all the services as well as civilian government employees and contractors could view programs on any standard American television receiver.  Programs included many of the most popular programs the American networks had to offer. 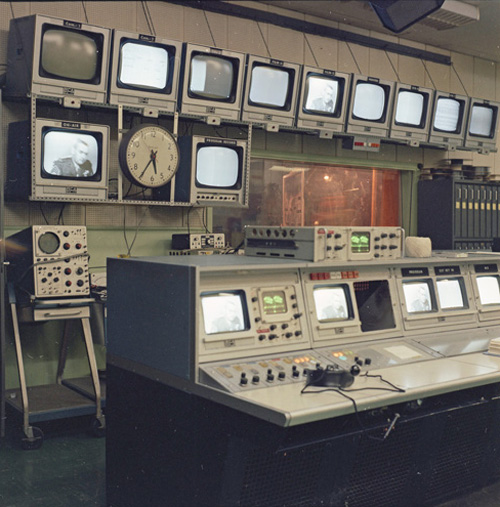 AFVN Saigon had a full sized studio, fully equipped control room, newsroom, video tape facilities, film editing, graphics department, film processor and engineering shop.   It also operated one of the last kinescope recorders.  Kinescopes were the filmed result of aiming a film camera at a video monitor.  The kinescope machine allowed programs produced on tape in Saigon to be “re-recorded” on 16mm film and then “bicycled” from the Saigon facility to the various detachments. Bicycling is a term borrowed from American television syndication whereby films and tapes are shipped from one local station directly to another subscribing station in another market.  In Vietnam, this took the form of a daily air courier. 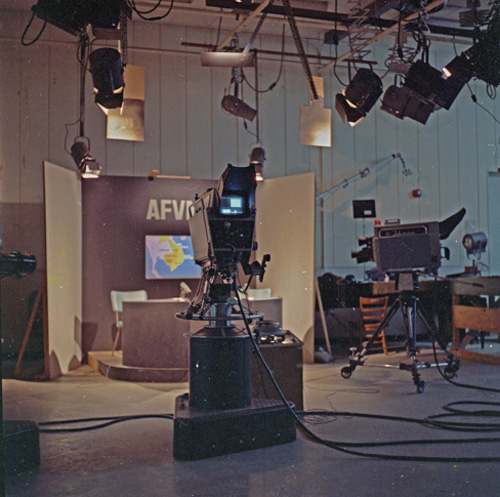 3 RCA TK60 cameras (one partially hidden on the left) sit ready to broadcast the AFVN Saigon News in 1970.  Photo by author.

Kinescopes were used heavily in Vietnam because videotape capabilities up country were sparse and some units were restricted to filmed programming.  In addition, the Saigon key station had no video interconnection with the detachments.  This was on purpose.  Due to the remote mountaintops across some of Vietnam’s most rugged terrain, microwave repeaters would have been tempting targets for enemy sabotage.

ABC, CBS and NBC as well as some major syndicators had a presence on AFVN.  Programs were shipped from AFRTS headquarters in Los Angeles on video tape or 16mm film.  They arrived with long stretches of black where the commercials and network promos would normally be.  Because the U.S. Government may not endorse any specific product, programming had to be shipped completely de-commercialized.  The breaks would be covered with Command Information announcements cut in just like local stations do with their syndicated programming and would help fill out the time to the hour and half hour.  If additional time was needed to fill out the program time, it would sometimes be provided by video versions of popular songs of the time.  Yes, American Forces television showed ‘music videos’ before the term had been coined.

Command Information manifested itself in the form of unique public service announcements produced in-house to keep service personnel and civilian contractors reminded of military rules and to inform them of everything from when to mail packages home for the holidays to how to avoid local diseases.

As news was part of the television landscape in the U.S., so it also was a major part of AFVN’s schedule.  AFRTS had negotiated a contract with CBS for the use of the “Evening News with Walter Cronkite.”  The programs were almost a week old when the videotapes arrived in Saigon, but the parts that were still timely were included in the AFVN’s own newscasts, just as any CBS affiliate station would do.  ABC Newsfilm was used in the same manner.

AFVN had no film crews to dispatch into the field but the newscasts did include news of Vietnam, including the war.  This was usually, again, via the reporting of CBS and ABC correspondents and from the wire service teletype machines in the newsroom.  Two enlisted men would sit at the “anchor desk.”  One read the national and international news and the other delivered the sports.  Each detachment produced their own local news programs as well using material sent out to them from Saigon.

Of course, sports programs were very popular.  Even though they were tape delayed, NFL games were always a highlight of the schedule.  During college football season, the Saturday “College Football Scoreboard”  show would fill one wall of the studio as scores were posted from what seemed to be every college in the U.S. with a football team.

With its substantial studio and three cameras, the key station had a heavy production schedule.  In addition to the Command Information Announcements for the entire network and its own local news and sports programs the studio also produced interviews, occasional briefings for the press and military and visiting USO shows that would make a stop at the Saigon studio to tape a show for use by both the key station and the up country detachments. 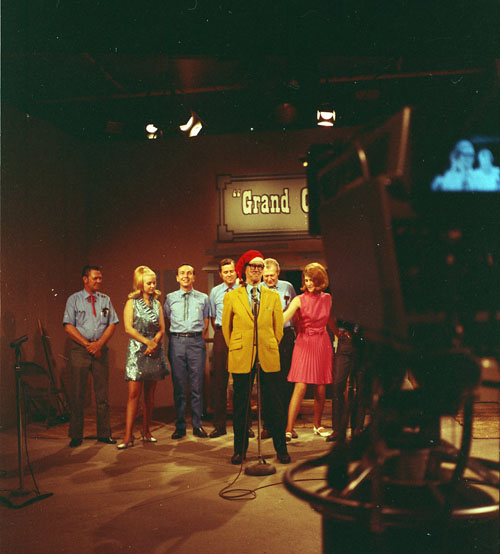 The late Roy Acuff and his USO Show visit the AFVN Saigon studio to videotape their act.  The stars also would be asked to record Command Information announcements, too.  I believe Mr. Acuff (with the Santa hat) is telling service personnel to mail early for the holidays.  Photo by author.

From sit down interviews with famous people to performing rock bands to song and dance numbers, entertainers, authors, sports greats, film and television stars and other celebrities would spend a half hour or more making a television version of the USO show they did live for many of the troops.  Television made it possible for personnel who could not get to a show in person to still have an opportunity enjoy it.

The staff of AFVN was drawn from members of four of the five military branches at any given time, the Coast Guard being the lone exception.  Many had come from broadcast backgrounds before entering the military.  Others just happened to get assigned and were getting their first taste of broadcasting.

As the Vietnam War drew to a close, detachments began to shutdown in early 1973.  Saigon was the last station off the air as AFVN ceased opereations on March 22, 1973.  A radio service continued for civilians and the equipment manned by civilian contractors.  It would be the beginning of an era and an end of one as well.  A few short years later, the regular use of communications satellites and then the Internet would make a network like AFVN unnecessary.

Unlike Vietnam, where AFVN was the only source of broadcast news and entertainment, military personnel over the years have had an ever expanding choice of international feeds of many familiar networks such as CNN and Fox all over the world in many different languages.  They also have the ability to use video services to see and hear family and friends on the other side of the world on their laptops and cell phones.

As the communication landscape changes, so must AFRTS evolve.  It was the signal that provided “a touch of home.”  It was on the air in Iraq and Afghanistan.  But AFN now has its own worldwide satellite feed.  American Forces Network is in danger of becoming a carbon copy of all those commercial signals that surround it.  Just like the American television it represents, localism is giving way to a homogeny that continues to spread throughout the world.