Word came out over the weekend that Technicolor has discontinued Color Assist and Color Assist Looks, their low cost video grading applications. This comes as a bit of a surprise as they were very recently still actively marketing the product. They had introduced a looks package called Color Assist Looks and there had been a recent update to work with Adobe products. In fact, as of this writing the front page of the website still shows After Effects integration while the Color Assist page is the death announcement. I think it's safe to assume there's two parts of the company not communicating very well.

Color Assist was a very curious program when it was released. At $99 it was very affordable (cheap some might say) and what I think was the first for the high end company Technicolor: a prosumser / consumer app. Years ago Technicolor released the Cinestyle flat picture style for Canon DSLRs but that was less about being in the prosumer / consumer market and more of applying their skills to a camera that was begin used by everyone: amateurs and pros alike.

If you are a Color Assist customer or have any questions about Color Assist, please contact [email protected]

So what happened to Color Assist to make them kill it seemingly out of the blue? We don’t know for sure and we’ve reached out to Technicolor for further word so we can only speculate. My guess is that … well …. the product wasn’t very successful. It’s not that it wasn’t a capable application though. We have had a copy of Color Assist in the Editblog labs for quite a while but we hadn’t posted a review of the product as we hadn’t found any real world situations in which to use it. All of our product reviews go though some real world testing and I never found a place for Color Assist. We would either be doing color work directly within our NLE, sending work out to a professional colorist or working in DaVinci Resolve. 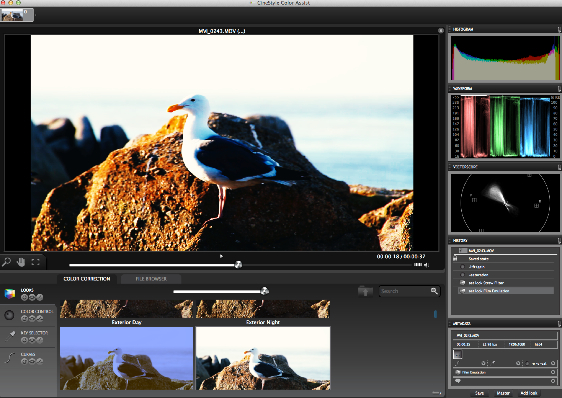 Color Assist had a very simple yet quite powerful interface.

There was even secondary keying.

I was never able to find a place for this curious little application to fit in. I remember getting a demo at NAB 2012 of Technicolor CineLights and wondering exactly where this tool would fall into the market. It seemed to be then that pros would opt for more powerful and integrated tools while consumers wouldn’t go through the trouble of coloring their DSLR media at all unless it was in an iMovie. The hobbyist market might go for such a tool but that market wouldn’t have been enough to keep a big company like Technicolor interested. Vincent Laforet seemed to be a big fan of Color Assist (as did some of his commentors) but I can’t help but wonder how much he really used it outside of early testing. In the relatively short time that it was out I don’t think I really heard much about the software from anyone. A good indicator of a software’s usage out in the world is to do a YouTube search for tutorials and Technicolor Color Assist doesn’t return much. There’s the answer right there as to why it has been killed.

@micahslay Sorry for the lack of feedback. Unfortunately Color Assist will no longer be sold, but we are grateful for your interest.

I called Color Assist a curious program as being something that seemed to be aimed at a lower end of the market it sure did use a lot of high end terms around the interface. Linear, log, inverse s-curve, offset/power/slope and 3D LUT float are all terms that would most likely go right over the head of the consumer / hobbyist. But yet the program was simple enough that even a rank amateur could load up some footage, read a tutorial or two about traditional grading controls and go right to work making some pretty pictures.

Overall I guess I’m sad to see Color Assist go as it’s sad to see any good post-production tool exit the market. While some aren’t happy with the way Technicolor went about the life and death of this product my bet is that most people won’t really blink an eye. I think what sums the death of Color Assist up more than anything is the same thing that happened to a recent Schlotzsky’s Deli that closed up down the street from me. Most anyone you talked to loved the food at Schlotzsky’s but when you asked the last time they had eaten there? “Oh, we’ve never actually been there.”

If you have any questions about this product’s demise then reach out to Technicolor as I hear that they are trying to respond to concerned customers. We’ll all be watching to see what they come up with next.