Presenting the next generation of pro video tools

NAB is in full swing and we are previewing the next versions of our pro video and audio applications for visitors to the show. There’s so much to see at the Adobe booth SL3910 – and the crowds are loving it! Here are some of the highlights:

Editing: An Adobe Premiere Pro Preview
Adobe Premiere Pro is now the market-leading NLE according to Frost and Sullivan. We believe this is a direct reflection of the fact that we listen to our users and we remain committed to making your editing workflow work the way you it want to. There are hundreds of new features coming in the next version. Here are a few of them:

Editing Finesse represents a whole set of interface and workflow enhancements, including a redesigned timeline, intuitive track targeting, Dupe-detection markers, clearer media start/end labels, and handy new tools, such as Paste Attributes for copying effects from one clip to another. It’s just going to be that much more fun doing your editing in the new Adobe Premiere Pro.

Link & Locate helps you track down your clips quickly, no matter where they’ve moved, making media management a cinch.

The Lumetri Deep Color Engine, the underlying imaging technology in SpeedGrade, has been integrated in the next version of Adobe Premiere Pro so that you can apply rich, beautifully styled color grading presets as easily as adding a dissolve.

There will also be a new Audio Clip Mixer so you can adjust the gain for each clip independently for a perfect mix, and choose from a host of new real-time audio effects to achieve even better sounding productions. 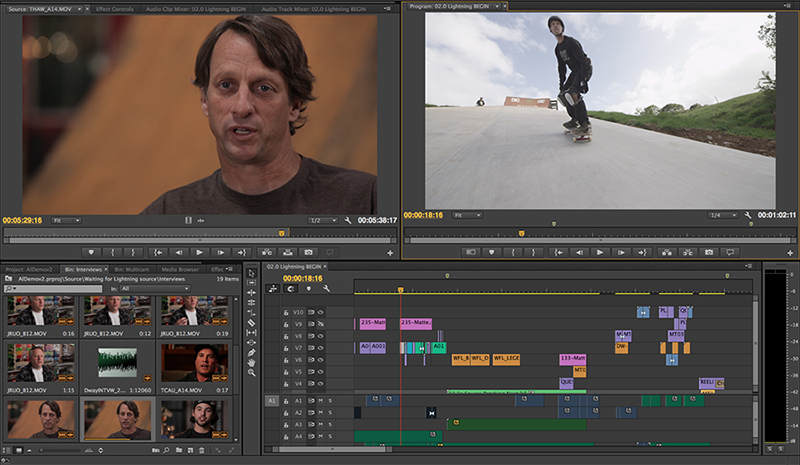 Adobe Story Plus—included with Creative Cloud membership—is a robust screenwriting and preproduction application. When the next version of Adobe Premiere Pro hits the streets, you will be able to import scripts created in Adobe Story, along with associated metadata, to guide your editing.

And there is lots more, such as expanded format support (cross-platform ProRes and MXF-wrapped Avid DNxHD, come to mind), but it’s time to move on to some more hightlights…

Motion graphics and VFX: What’s next for After Effects
Adobe After Effects, the industry-standard for motion graphics and visual effects work celebrated it’s 20th anniversary this year. Last week we posted a cool video on Adobe TV showing the history of rotoscoping in, like, 120 seconds. The video also gave the first sneak preview of a cool new feature that will change the future of rotoscoping, the new Refine Edge tool, including a Hairbrush feature that has to be seen to be believed. I highly recommend this video and Chris Meyer’s article about the new feature is a must-read for After Effects aficionados.

But that’s not all that is coming to After Effects. The next version includes MAXON CINEMA 4D Lite and the new Live 3D Pipeline between CINEMA 4D and After Effects provides an easy bi-directional workflow, so you can build 3D models, bring them into After Effects compositions, and tweak and adjust until everything is just right, without constantly having to re-render every little thing (This will also work with the full version of  CINEMA 4D, if you already own it). If you do 3D, you are going to LOVE this! 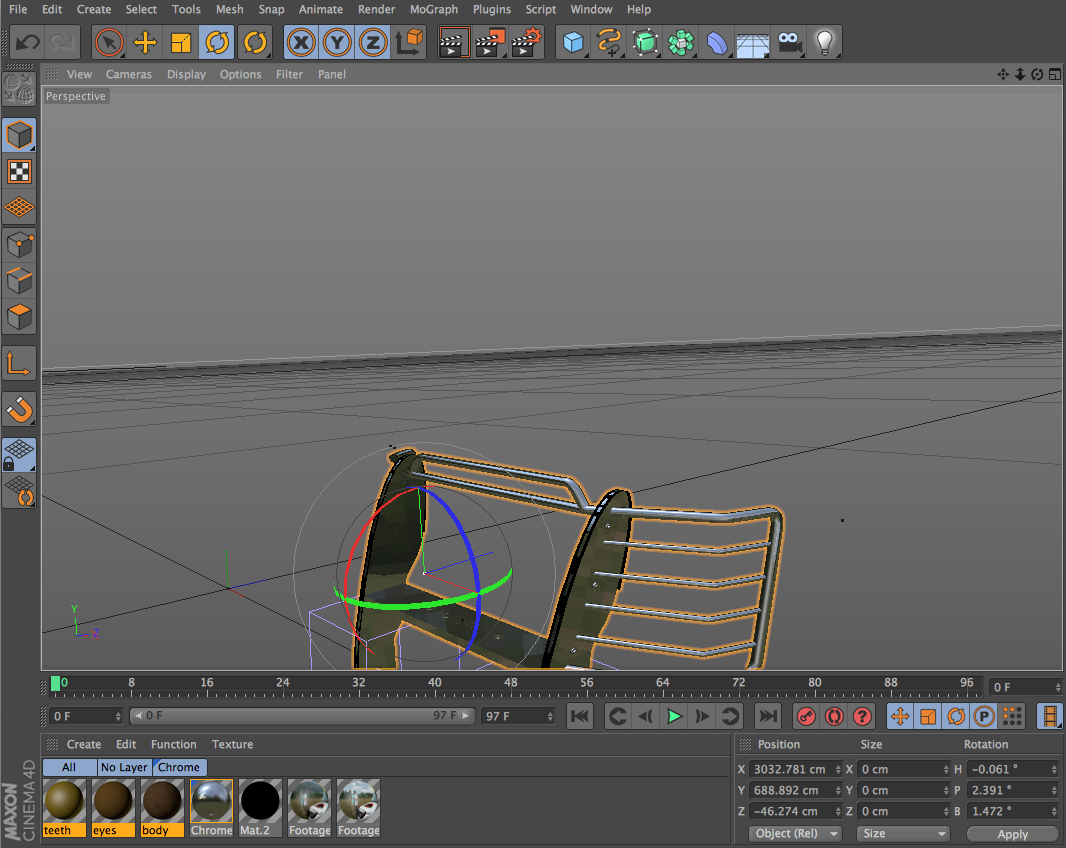 After Effects will have more new stuff, of course, including Warp Stabilizer VFX, allowing you to lock and stabilize specified elements within your image. It also lets you do cool things like stabilize a shot to fix something, and then reverse stabilize it after you’re done to artfully restore that camera jitter.

Audio: The next Adobe Audition
Adobe Audition works its magic by making sound visual so you can add effects, as well as fix and mix audio using your eyes and your ears. We think the Adobe Audition signal processing is second to none. We can’t tell you how many people coming over to Adobe Audition say their projects just sounds better since they switched. Music to our ears.

The next version of Adobe Audition will introduce Sound Remover, a powerful all-new technology that allows you to identify and remove specific foreground sounds just by using samples: Sound Remover then finds that sound pattern throughout the clip and … removes it!

Preview Editor is a super-versatile new split-screen view where you can visually compare effects results and view multiple sections of a file simultaneously. And there will be so much more in the next release of Adobe Audition: a whole bunch of multi-track enhancements, including some really neat drag-and-drop behaviors, and new Sound Design tools, such as Noise Generator, Pitch Shifter and Pitch Bender. The list goes on.

Adobe Audition (along with Adobe Premiere Pro) will also include the TC Electronic LoudnessRadar, so you can ensure all your projects meet the new broadcast requirements that are coming into force these days. 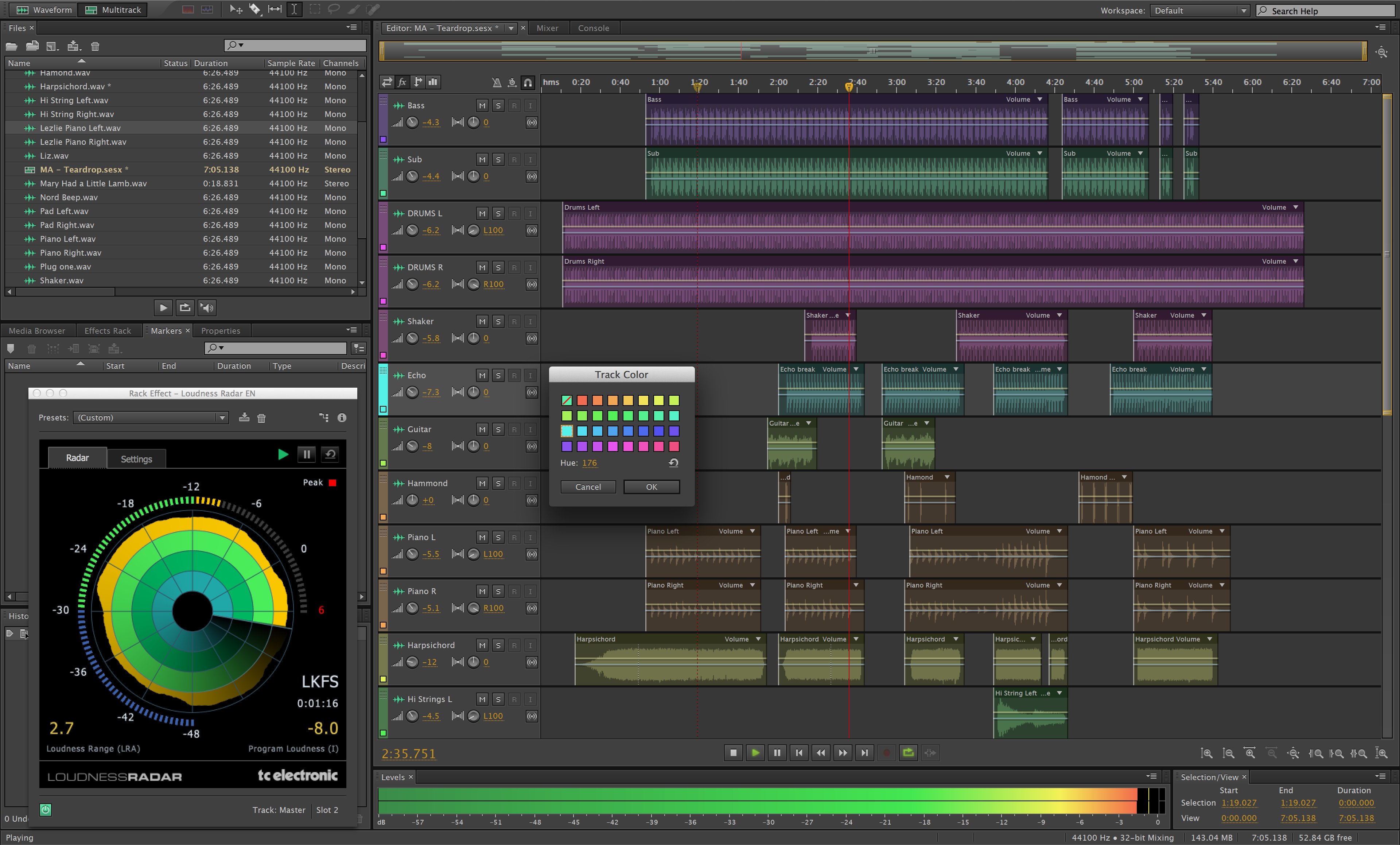 Ingest and logging: Adobe Prelude
Adobe Prelude provides a unified, easy-to-use interface for ingest and logging of file-based camera media. The benefit is that your files are all organized for a smooth postproduction workflow – think of it as the digital camera version of “an ounce of prevention…” to save time and trouble later on.

The next version of  Prelude will offer metadata templates, so you can define what information you want to have logged before you begin. You can also set Prelude to automatically rename files as they are ingested. It’s all about getting everything organized right from the start.

You will be able to assemble rough cuts right in Prelude  and export them for review by other members of your team. There will be a new Adobe Story panel where you can view scripts created in Story: just drag and drop scenes onto your clips to add them as metadata. 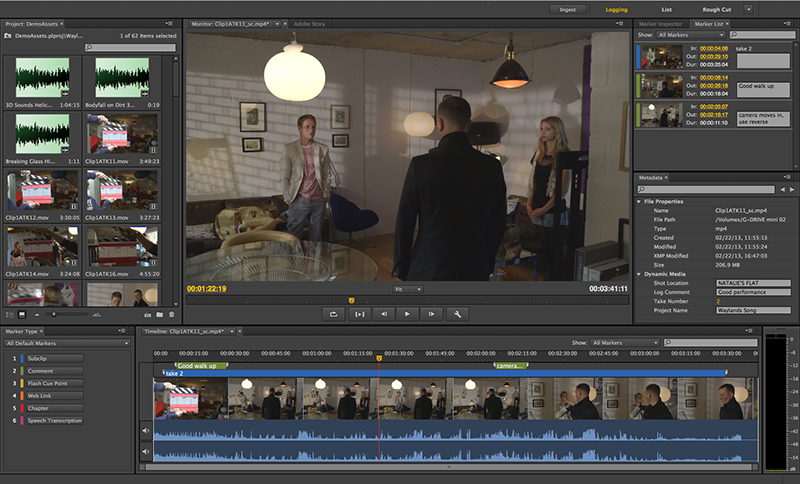 Color grading: Redesigned Adobe SpeedGrade
We believe that color grading will play a huge role in the future of digital filmmaking. Adobe SpeedGrade gives you the tools to apply precise color corrections and design rich creative looks that make your productions really stand out on the screen (wherever that screen may be).

The next version of SpeedGrade offers a fully redesigned user interface and we think that Adobe Premiere Pro users will feel right at home in it. The tools are right where you need them and the redesign helps you make the best use of limited screen real estate (especially useful if you are working on a laptop).

Shot Matcher is a powerful new tool for … well … matching shots. Instead of doing it manually the old-fashioned way, one shot after the other, with Shot Matcher you can match one clip to another with just a click. Yet another tool that can help save you countless hours. You can also bring in color corrected still images from Photoshop and match your shots to them in SpeedGrade. Visitors to the booth are loving this feature!

SpeedGrade will also offer a new Luma Waveform display providing easy-to-read left-to-right luminance values of your clip at a glance – perfect for quick and precise black- and white balancing (it's the bottom right scope in the image below…).

SpeedGrade will also include film stock emulations you can apply to your shots to give them, character and a richer, more cinematic look, an easy Continuity Checker for seeing how well your clips are matched, and a cool new Snapshot Browser for grabbing and storing reference stills as you work. We will also offer support for the Tangent Element control surface. We think you're going to love the next Adobe SpeedGrade!

Don’t miss our NAB Show Special
Sign up for Adobe Creative Cloud between April 4 through 19, 2013, and you'll get 40% off  for your first year  – that’s only $29.99/month. When you join Creative Cloud, you will be able to download and run all of the currently shipping Adobe CS6 applications immediately. As soon as the next version are released, you be able to install them as well, at no additional cost.

Learn more: at the show or online
If you are at NAB 2013, please drop by booth SL3910 to see the next versions of the Adobe pro video applications. Follow the action on Twitter – #TeamAdobe