We’ve been patiently waiting since April 2012 to find out exactly how compatible the T-TAP is. Now you can know… 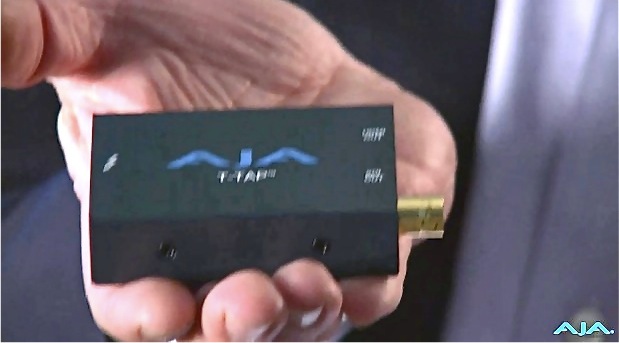 Back in April 2012 at NAB in Las Vegas , the USA-based AJA first announced and showed their US$295 T-TAP out-only audio/video Thunderbolt interface, which makes a lot of sense in the age of file-based video production. Since April, I have covered the product in a few articles, and kept pressing AJA for more details, specifically with regards to very detailed specs to meet the beloved (yet demanding) HP DreamColor monitor. Finally, AJA lent me a T-TAP so I could test it myself. Ahead you’ll find AJA’s own warnings, my findings, and then my observations about where and when the T-TAP will logically fit in a system.

What a T-TAP does, and how could it help you?

At US$295, T-TAP is a relatively inexpensive out-only Thunderbolt audio/video interface that allows you to monitor (with proper spatial resolution and proper framerates) onto a trusted (and hopefully calibrated) monitor or HDTV set with popular video editing applications from Apple (Final Cut Pro), Adobe (i.e. Premiere Pro), and Avid (Media Composer, NewsCutter, Symphony) in full screen, with its proper colors and framerates. (To accomplish some of those goals without such an interface is challenging and has drawbacks; to do all of them at all framerates requires hacking of the OS using a shareware app.) T-TAP has both HD-SDI and HDMI output to connect to a monitor or HDTV set. When I say inexpensive, I mean compared to other interfaces sold by AJA (and others) that also offer more features, like input capabilities, loopability (daisy chaining), and hardware-based color space conversions which many of you probably don’t need. The T-TAP is a self-powered end-point Thunderbolt device, so you’ll have to put it at the end of the Thunderbolt chain, i.e. after your Thunderbolt disk array or drive. If you need to connect yet another end-point Thunderbolt device to your system, keep in mind that many of the latest Apple computer models offer two Thunderbolt ports.

What applications will definitely work with T-TAP?

When I did my tests in early October 2012, both Apple’s Final Cut Pro (I did my tests with FCP X 10.0.5, since 10.0.6 hadn’t yet been released) and Avid’s Media Composer were working (I did my test with Media Composer 6.01). The day I had access to a DreamColor monitor (thanks to Orlando at Luna Studio), the necessary T-TAP plugin for Adobe Premiere CS6 wasn’t yet available from AJA, although it is now, and I have no doubt that that it will work just as well as it did for me with FCP X and Media Composer. Details about T-TAP’s behavior during my tests are ahead in this article.

What apps may work in the future with T-TAP?

Given non-binding predictions I heard from trusted sources, it is very likely that T-TAP will also work in the future with other Adobe applications, like SpeedGrade.

I also received a non-denial about the more remote possibility of a desktop mode further in the future, to record training from the Mac’s own GPU output. For that, AJA recommends AJA’s FS2. For that purpose, I know that Alex Lindsay records the Mac’s GPU output at 60.000p using a Pix recorder from SoundDevices and then conforms to 59.94p in post. Alex says that other recorders he’s tried reject the 60.000p signal.

What apps are unlikely to work -ever- with T-TAP?

It is highly unlikely that T-TAP will ever work with Blackmagic’s DaVinci Resolve grading application, unless AJA every buys the Blackmagic company, or vice versa.

Will the T-TAP work properly with an HP DreamColor monitor?/AJA’s cautions/My findings

If you have read my prior articles which cover the HP DreamColor, you know that the DreamColor Engine inside of the HP DreamColor is quite demanding: It insists on receiving pure progressive and pure RGB: no PsF; no interlaced video, and no component/YUV. If you send the DreamColor monitor any of those, the Engine will shut down and the monitor will go to Full, so you’ll no longer have your desired setting, like 601, 709, or DCI.

During the months after NAB in April (before AJA finally lent me a T-TAP for evaluation), I’ve been pestering the product manager about those details, especially when it might be necessary not only to request a realtime color conversion, but also a conversion from interlaced into progressive on the fly. Since April of this year, AJA clarified that (unlike higher-end products like AJA’s Io XT), T-TAP does not offer hardware-based color conversion to RGB/4:4:4, so conversion will be done in software and the computer’s CPU. In later emails, AJA became more specific:

As described to you on previous occasions, the T-TAP does not have RGB frame buffer modes. While RGB workflows may be able to be supported to a certain degree based upon your CPU's abilities for color transcoding in software and by setting the AJA Control Panel for RGB out HDMI, performance might vary due to frame rates, raster, application and monitor used.

In other words, if and when it works, it is possible that you might occasionally have a dropped frame on your monitor, depending upon the speed of your CPU and how many other things it may be juggling simultaneously.

So first I tested the basics, both in FCP X 10.0.5 and with Avid Media Composer 6.01. When I say basics, I mean things that would be less demanding. I tried all of the following with both apps:

The CPU in my 11″ MacBook Air with a not-so-fast 1.6 GHz Intel Core i5 handled the realtime conversion from YUV to RGB, and the DreamColor Engine was happy!

Then I tried something that would be more demanding, with both apps:

The CPU in my 11″ MacBook Air with a not-so-fast 1.6 GHz Intel Core i5 handled both the realtime transcoding from YUV to RGB and the realtime de-interlace, and the DreamColor Engine was happy!

Reminder of AJA’s caution, together with my observations:
My mission during the short time while I was at the facility with the DreamColor monitor and the T-TAP was to determine which modes (if any) were compatible with the Dreamcolor Engine. Fortunately all were, even the most demanding one, which demanded both color transcoding and (in the last tests) realtime de-interlacing. So T-TAP delivered everything AJA promised, and even some things that AJA didn’t promise. I was not there to determine whether there where any dropped frames, nor would I recommend using a not-so-fast 1.6 GHz Intel Core i5 to build an editing system nowadays. I am glad to know that the DreamColor Engine was happy with the results. I did find that T-TAP runs quite hot, and wrote to AJA to inform about that.

Although it is not yet shipping, Blackmagic recently announced its US$145 UltraStudio Mini Monitor, whose specs are very similar (although not identical) to those of US$295 T-TAP. I’ll compare them in my related three articles:

My recommendations regarding T-TAP


If you need an output-only Thunderbolt audio/video interface primarily for proper full screen monitoring of video editing of component/YUV material using Adobe’s Premiere Pro CS6, Apple’s Final Cut Pro X, or Avid’s Media Composer, NewsCutter or Symphony, and you need it immediately, T-TAP is an excellent and relatively low cost solution at US$295. If you have a DreamColor and can live with the possibility of dropping a frame occasionally, add yourself to the aforementioned qualification. If you expect to do grading with DaVinci Resolve on the same system (and view DaVinci Resolve’s output full screen on your video monitor or HDTV set), then don’t consider T-TAP.