The Winter Games are a chance for us to witness magic moments of incredibly artistry and athleticism performed by the amazing athletes competing there. But in order for us to do so, broadcasters around the world spent months preparing for that short period of intense coverage. For Swiss Radio and Television (SRF), a publicly funded broadcaster serving the German speaking part of Switzerland, the preparations included creating a stunning opener that builds excitement for audiences tuning in to the games. Patrick Arnecke, head of design and promotion, leads the creative team responsible for design and production of the on air campaign.

Adobe: Tell us about the Swiss Radio and Television.
Arnecke: The SRF is a publicly funded broadcaster that serves the German speaking part of Switzerland. We maintain two full blown 24/7 TV channels, a TV repeat channel for news programs, seven radio channels, and an extensive online portal.

Adobe: What teams do you work with at the SRF and what do they produce?
Arnecke: I’m the head of the design and promotion team. The design team consists of 25 designers who do all corporate design, motion graphics and interaction design for SRF. Creatively they are responsible for channel brandings, campaigns, image clips and labels as well as show packagings. We also do all of the 2D and 3D animation used for our TV magazines and news shows. The promotion team has 11 editors and promo producers who work on traditional on-air trailers as well as cross media campaigns.

Adobe: Tell us about the work you’ve done for the Winter Games?
Arnecke: Last year during the summer we started to rethink our overall sports design. We have various sports programs on air and wanted to repackage the whole set of shows for SRF zwei, our main entertainment and sports channel. We regularly cover huge events like the Winter Games for the Swiss audience, and we needed to come up with a solution for those events as well, and tie that into the overall design.

We decided to center our redesign around the core idea of the “magic moment” – these rare moments when extraordinary athletic performance seems almost supernatural. We then spent five days shooting all the necessary plates using RED Epic and Phantom Flex cameras, special camera rigs with a high speed camera carousel, and a huge 15m x 9m x 7.5m green screen area. Among others we staged ice hockey, alpine skiing, figure skating, snowboarding, ski jumping, and cross country skiing. Everything was conceptualized, directed, and pre- and post-produced by four in-house designers. From that footage we produced a 28-second opener for our Sochi coverage along with the show packaging, and the promo teasers that we used to ramp up the campaign in January. 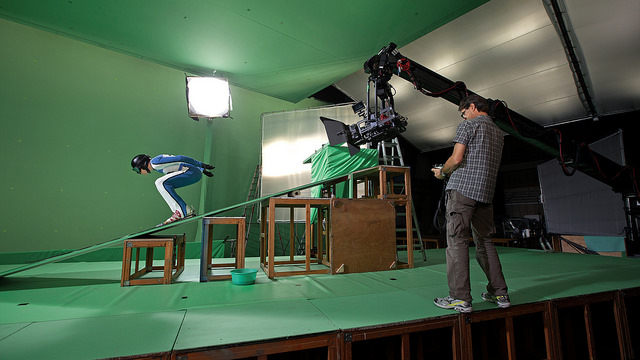 Adobe: What products are you using to produce your content?
Arnecke: Right now we have a mix of Adobe Creative Cloud and Creative Suite 6 software. On the design team we use Photoshop, Illustrator, and InDesign. Our main tool for 2D animation is After Effects, and we rely on CINEMA 4D as our main 3D package. The closer relationship between Adobe and MAXON and the strong connection between CINEMA 4D and After Effects comes in very handy for our pipeline.

At the beginning of 2013 we started using Edge Animate to create small, interactive HTML5 elements to give our online news articles more depth and interactivity. For our video content, we started to work with SpeedGrade to give content from different sources a uniform look. During the last months we switched to Premiere Pro as our main editing tool, which replaces Final Cut Pro.

Adobe: What was the workflow for creating the Sochi opener?
Arnecke: In pre-production the responsible designers Martin Bernhard (director) and Simon Renfer (co-director) used Photoshop, with Wacom tablets and screens, to create the storyboards. On set and after the shoot was completed, we used SpeedGrade to convert the Phantom material and then edited the content in Premiere Pro. Lead 3D Artists Jürg Dummermuth and Simone Nucci did all of the 3D CGI with CINEMA 4D. In addition to using After Effects for previsualization and animatics, it was also used for 2D animation, keying, rotoscoping, retouching, compositing, and grading. We’ve done a lot of smaller projects such as show openers and image trailers using Premiere Pro, but the Sochi opener is one of the biggest projects we’ve done to date with the new workflow.

Adobe: Why did you make the switch to Premiere Pro?
Arnecke: After Apple didn´t continue Final Cut Pro, we were looking for alternatives. The pipeline efficiencies that let us easily switch between Premiere Pro and After Effects are important to us. Premiere Pro is especially useful if we shoot on RED cameras because thanks to the Mercury Playback Engine we don’t have to convert and we can edit right away. We usually like to edit on set to see if what we’ve shot is exactly what we need. 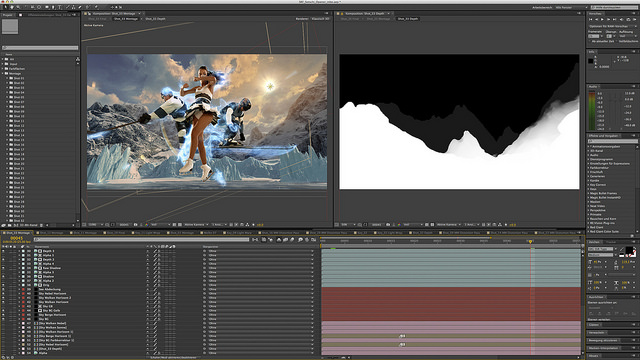 Adobe: Tell us how you’re using Adobe Edge Animate CC?
Arnecke: We have a small team of designers who work on infographics for our daily news shows. We use graphical content created for on air programming, add interactivity and repackage that content for our news articles online. For example, for the election of Pope Franziskus or the 50th anniversary of the President Kennedy assassination we created interactive explanatory pieces with Edge Animate. These interactives give more depth to our news articles online and typically take us one to three days to produce—last year we did more than 150 of these.

See examples of the infographics here

Adobe: What is next for your team?
Arnecke: We’re planning a seven day shoot that will take place in March for our summer sports. With the success of the winter sports workflow, we’ll be using a similar setup.

Read more about the use of MAXON CINEMA 4D