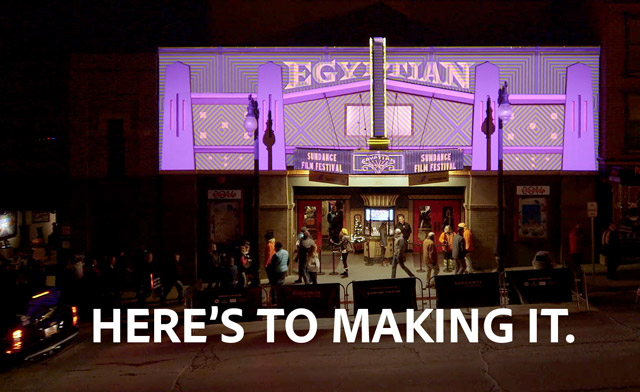 A hub of creativity, the Sundance Film Festival features filmmakers who aren’t afraid to break new ground. While much attention is paid to how the stories unfold in front of the camera, filmmakers continue to innovate and push creative boundaries after filming wraps.

Adobe is proud to report that 21 films debuting at the 2015 Sundance Film Festival were cut with Adobe Premiere Pro CC, more than doubling the number of films edited on Premiere Pro from last year’s festival. The seamless integration with Adobe After Effects CC, as well as the native editing, speed, and affordability of Premiere Pro make it an ideal choice for both up-and-coming and experienced filmmakers.

Bill Roberts, senior director of product management for video at Adobe, applauds the filmmakers who have put in the hard work to make it to Sundance. “We are thrilled to provide tools that independent filmmakers use to bring their stories to the screen,” he says. “Adobe is committed to providing filmmakers with a tightly integrated set of creative tools that offer the most productive workflow regardless of how big or small their production budget is.”

Below is a listing of the films edited with Adobe Premiere Pro CC that will premiere in Park City. In the lead up to the festival, we’ll be talking with many of the films’ directors and editors to learn about their projects and the role Adobe software played in bringing them to the big screen.

Advantageous (US Dramatic Competition) – Director: Jennifer Phang, Screenwriters: Jacqueline Kim, Jennifer Phang
In a near-future city where soaring opulence overshadows economic hardship, Gwen and her daughter, Jules, do all they can to hold on to their joy, despite the instability surfacing in their world. Cast: Jacqueline Kim, James Urbaniak, Freya Adams, Ken Jeong, Jennifer Ehle, Samantha Kim.

Fresh Dressed (Documentary Premieres) – Director: Sacha Jenkins
The history of hip-hop fashion from its birth in the South Bronx to its rise as a billion-dollar global industry, Fresh Dressed is supported by rich archival materials, in-depth interviews with individuals crucial to the evolution, and the outsiders who study and admire them.

Things of the Aimless Wanderer (New Frontier) – Director and screenwriter: Kivu Ruhorahoza
A white man meets a black girl, then she disappears. The white man tries to understand what happened to her while also trying to finish a travelogue. Things of the Aimless Wanderer is a film about the sensitive topic of relations between “locals” and Westerners, about paranoia, mistrust, and misunderstandings. Cast: Justin Mullikin, Grace Nikuze, Ramadhan Bizimana, Eliane Umuhire, Wesley Ruzibiza, Matt Ray Brown. World Premiere