Streamstar’s touch screen interface to a video mixer will please iPad and other tablet lovers, since they will press actual images instead of buttons. 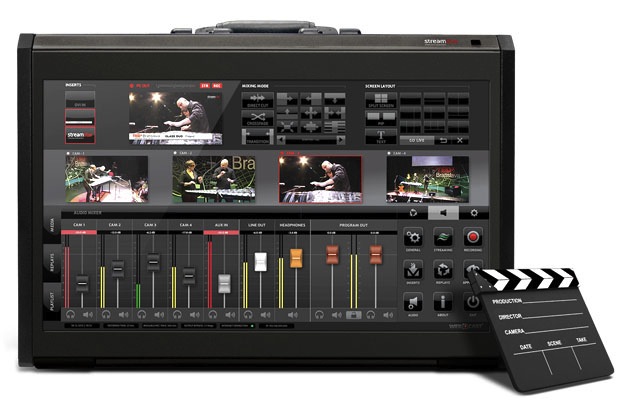 Straight from Bratislava, the capital city of Slovakia in Europe, Streamstar has announced two new products for live web streaming that I find quite intriguing, and I am sure that many ProVideo Coalition readers will too. Webcast Case is a portable device to switch/mix, record, and stream live from multiple local cameras with a touch screen user interface rather than a traditional button-based panel, so the Webcast Case is it: no external panel or video monitor is required! On the other hand, Webcast System is a DIY components + software kit for you to integrate into your own computer case. Both versions include instant replays with inboard slow/fast motion playback which will be very attractive for live sports production. This article will cover the specs and features of each, and make system suggestions. 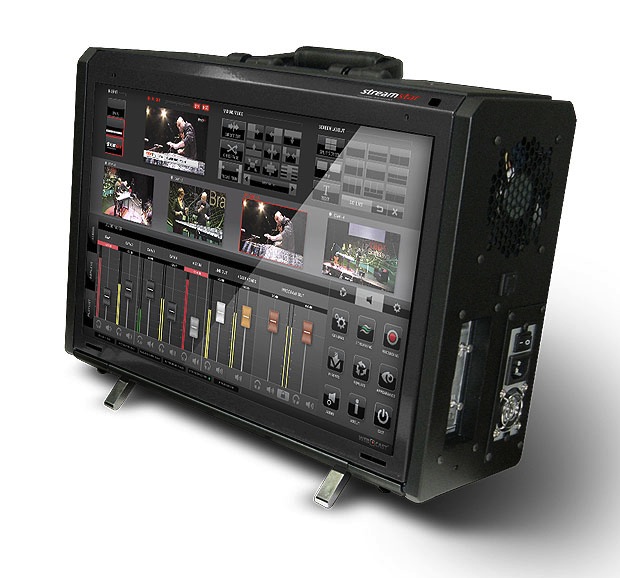 Webcast Case weighs 8 kilograms (about 17 pounds). Rather than using a traditional button based-panel, Streamstar has chosen to go with the new trend -set by tablets like Apple’s iPad- and use an inboard touch screen interface for the director to switch among cameras and inboard pre-recorded sources, and to set up transitions and keys (superimpositions). 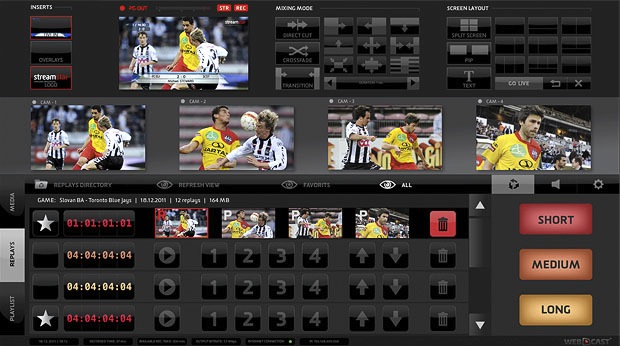 So for portable use, it is welcome not to have to carry separate video monitors and panels, although you’ll want to use headphones or powered speakers.

I was very glad to see that (unlike some other manufacturers which tend to segregate their products into regional versions), Webcast Case always ships as multistandard (NTSC, PAL, and their respective derived HD formats). I was also glad to see that Webcast Case accepts pure progressive over HD-SDI as well as PsF (in addition to interlaced formats, in case you have cameras that have no progressive modes). If your cameras offer any progressive mode(s), always favor one of them, especially for web and mobile delivery. And if your cameras only offer HDMI output (no HD-SDI output), use a Connect H2S converter from Átomos with each HDMI camera, since the H2S both converts to HD-SDI and eliminates the pulldown (2:2 or 2:3) that most 1080p HDMI cameras currently introduce on their HDMI output. I covered that issue in detail in this recent article.

I recommend the use of the last three (interlaced) formats shown above only if your camera has no progressive modes, in order to avoid an unnecessary de-interlace from a camera that does. Always use a progressive mode if available in your camera, either native progressive or PsF if it doesn’t offer native. 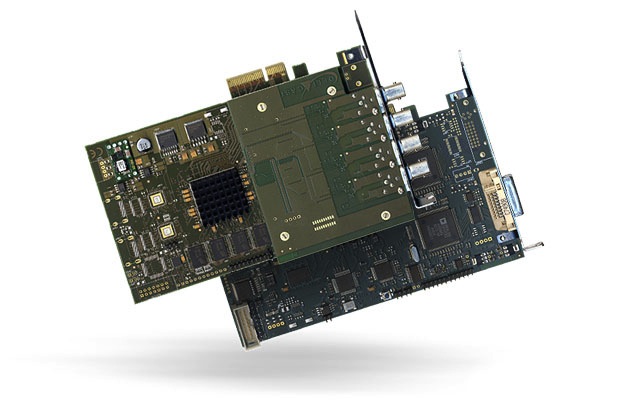 There is also a DVI capture card to receive graphics from another computer, including keying of that signal.

As expected, you must set your session for a specific framerate, and the camera sources must match that same framerate. Inboard and live web streaming can be either at SD or HD currently up to 720p. Inboard recording is MPEG2 at the following bit rates: HD 720p @ 18Mb/s (i.e. HDV 720p quality) or SD @ 8Mbps (i.e. DVD quality).

For live streaming in SD or HD, the built-in encoder currently has presets for up to HD 720p, and multiple CDNs are supported.

You can use this capability in Webcast Case to play pre-recorded intros, bumpers, commercials, and outros you may want to have during your live broadcast. Without this, you’d need a separate media player (i.e. HD tape deck or file player) and it would take a physical input. Having it available as an internal source alleviates both issues and reduces cost, space, and complexity.

Webcast Case’s live video output is a single DVI/HDMI output, which underlines the fact that Webcast Case’s primary mission is to webcast live (via Ethernet to your CDN via the Internet) and record internal files (onto an internal drive or an external drive or RAID). The DVI/HDMI output can show either program out or the Quadrator/Grid, so you can optionally connect an HDMI monitor with a built in waveform monitor like the V-LCD70MD from Marshall Electronics or the DT-R24L41D from JVC and match cameras’ white and black levels with more precision than you’d be able to do so by eye. However, if you want to stretch Webcast Case’s intention for live use in conventional over-the-air or cable TV station, you could certainly use an HDMI distribution amplifier and then one of its outputs to a converter to SDI/HD-SDI.

On Webcast Case’s inboard touch screen you can see:

Features of the Webcast Case video mixer/switcher section include :

For titling/lower thirds, you can either use the included templates (which include adjustments for position/font/size/color) or create them separately with a separate app (i.e Photoshop) with alpha channel.

Audio inputs and internal mixing
With Webcast Case, you can use embedded audio (4 channel) or connect external audio sources. 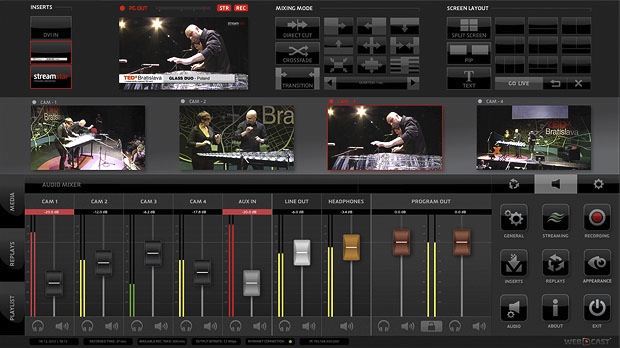 There is a built-in software based audio mixer for all audio sources. It includes:

Even though Webcast Case is a turnkey, luggable, self-contained device with a built-in touch screen display, it offers full access to all internal components for easy service and upgrades. Now learn about the DIY version ahead, before my conclusions and suggestions. 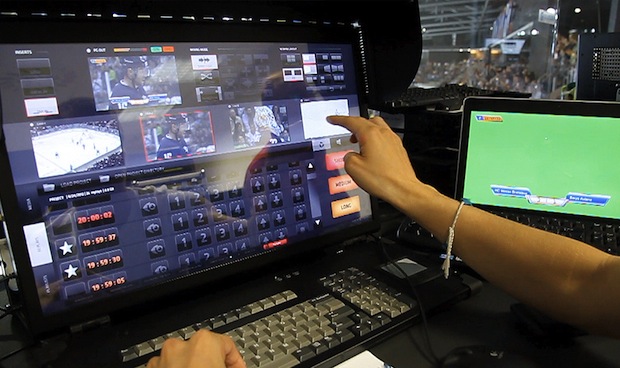 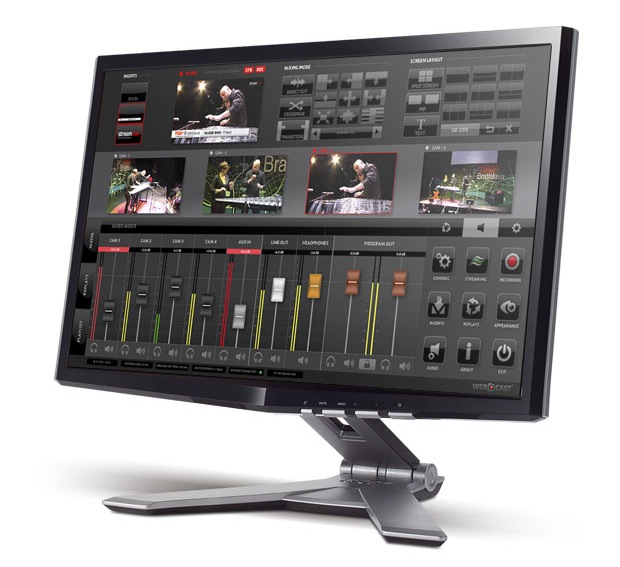 Both Webcast Case and Webcast System will soon be multilingual!

I am glad to tell you that both Webcast Case and Webcast System will soon be multilingual. I know because Streamstar’s parent company has contacted me to translate/localize the user interface for Castilian (aka “Spanish”). I don’t yet know what other languages may be coming out. In the case of Webcast Case, it ships with a multilingual version of Windows 7.

If you are planning to acquire a portable audio/video web streaming device, you’d like to to be streamlined, and you like the touch screen interface you have seen in tablets like the Apple iPad (or Android tablets) as an alternative to the traditional button panel, you owe it to yourself to look into the Webcast Case or Webcast System from Streamstar, which you can see on their website at StreamStar.com. If you already own cameras, then follow the advice I gave earlier in this article. If you don’t already own cameras, be sure to purchase ones that offer true progressive modes or at least PsF. This advice is not exclusive to the systems from Streamstar. It applies to any multicamera webstream system. If you purchase HDMI cameras without HD-SDI output, then purchase an H2S converter as indicated earlier in this article, since it will both convert to HD-SDI and remove the pulldown.

Streamstar’s parent company has hired Allan T©pper/TecnoTur LLC for consulting, technical writing and translation/localization services. However, the thoughts, concepts, and conclusions presented in his article are Allan T©pper’s own. Some of the other manufacturers listed above have contracted T©pper and/or TecnoTur LLC to carry out consulting and/or translations/localizations/transcreations. Many of the manufacturers listed above have sent Allan T©pper review units. So far, none of the manufacturers listed above is/are sponsors of the TecnoTur programs, although they are welcome to do so, and some are, may be (or may have been) sponsors of ProVideo Coalition magazine. Some links to third parties listed in this article and/or on this web page may indirectly benefit TecnoTur LLC via affiliate programs.