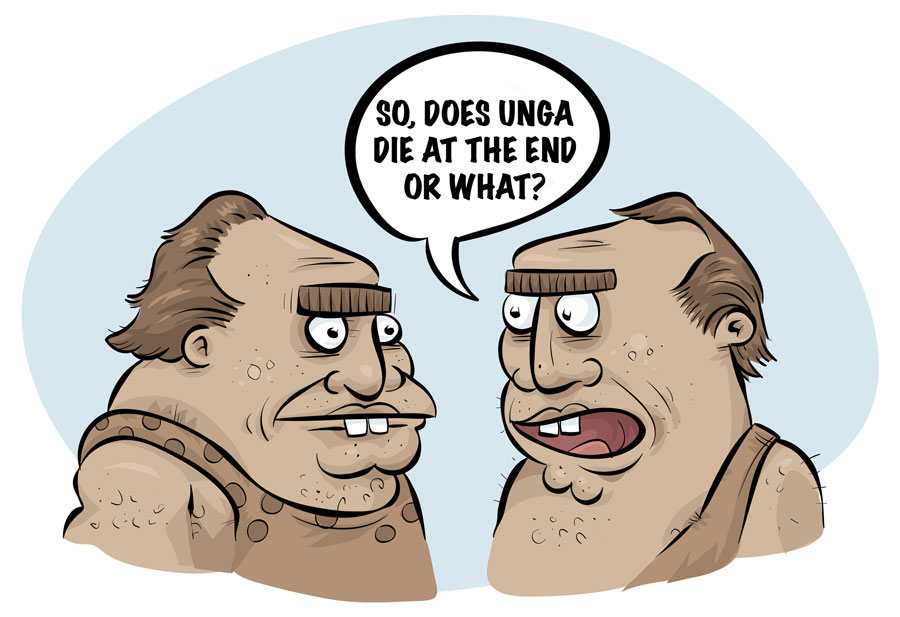 The first story told by humans probably went something like this:

We evolved the capacity for telling and interpreting stories as an important way to learn things from other humans. This created a fundamental relationship between two parties, storytell-er(s) and storytell-ee(s). This relationship has withstood the test of time, holding firm through every technology revolution – the spoken word, the invention of theater, the printing press, film & television, and the web.

My argument is that the latest of these revolutions, the epic explosion of devices and connectivity now networking our entire species together, will not change the foundations of storytelling either. It’s alluring to think that the rules have changed or will change so much that we will become free of the tyranny of plotlines and escape the prison cell of beginnings, middles and those dastardly endings.

And it is certainly true that things are different now, and getting more so every day:

However, this does not mean that the following are true:

While these ideas seem intuitive, unfortunately they are almost entirely false. I have spent more than a decade helping to explore these boundaries, being part of teams that have:

These were just a few of many pioneering projects I was lucky enough to be part of, which were, by and large, hugely effective. Billions of impressions were generated, and in the process we tried almost every possible way of inducing audience participation…

(OK. Shh. Here’s a secret… just between us… Almost no one (typically less than 1% of the total audience) actually participated in these projects. Most of the audience just watched the few people who did participate, or simply consumed any linear narrative that came out of the process at the end, or even more likely, just read about it and thought it sounded kind of cool.)

While building these projects, a crucial distinction came up time and time again, namely, the difference between active and inter-active. “Active” means that people are engaged in some way with the content – this could be looking up additional information through the web or using multiple devices to consume the content, or simply laughing or crying, but in all cases leaving the story itself intact. “Interactive” means that actions affect the content, giving you a role in the story, whether that’s as a character, a writer, or both.

I invite the reader to think about their wide circle of friends and family. How many of them are, or want to be, actors, or writers, or both? How many of them read Choose Your Own Adventure books? How many have actually played an alternate reality game?

How about yourself? Does the thought of role-playing a character within a story excite you, or make you cringe and want to run away? Think of your favorite stories… How many of them would be better if you, or some Random Person had chosen the ending, rather than the author?

OK, what’s the point of all this?

If we are going to collectively advance the concept of “transmedia” from a nearly meaningless buzzword to a powerful brand for next generation entertainment (e.g. “the movies” or “television”), we must buckle down and define it. By defining it, we must first decide what it is not.

In my view, transmedia is not:

I am absolutely certain that a new technology revolution is here that is going to have a severely disruptive effect on the entire entertainment industry. This disruption will bring nearly everything we know about entertainment into question, erasing creative boundaries, upending business models, and radically changing consumer behavior.

However, I am equally convinced that no technology, ever, is going to change the core concept of storytelling, and that if we want “transmedia” to have meaning, we’d better focus on how to tell stories in this new light, rather than deciding whether we’re telling stories at all.

Shameless plug: Go check out RIDES.tv. Is it transmedia? You tell me! I welcome all disagreement, derision and debate, as well as compliments, trophies, and large checks.