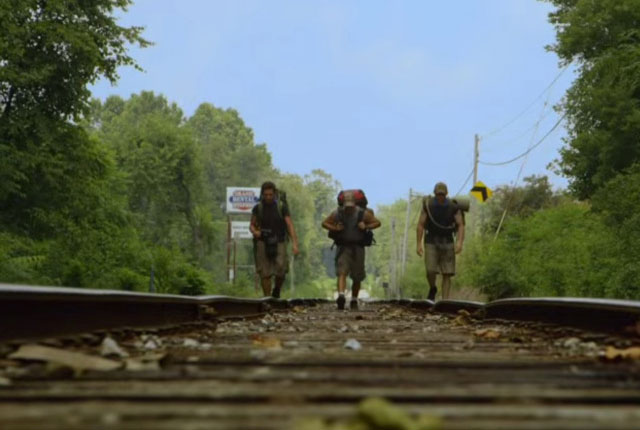 The Last Patrol, which premiered on HBO on November 10, 2014, is the third installment of Academy Award-Nominated director Sebastian Junger and cinematographer Rudy Valdez trilogy of war documentaries, which includes Restrepo and Korengal. The filmakers relied on the Canon EOS C300 Digital Cinema camera to capture The Last Patrol.

The Last Patrol follows Junger, photojournalist Guillermo Cervera, and combat veterans Brendan O’Byrne and Dave Roels as they hike the 300-mile stretch of railroad lines from Washington, D.C. to New York City – a trek Junger originally planned with his close friend and acclaimed war photographer Tim Hetherington before Hetherington was killed in 2011 while covering the Libyan civil war. The goal of the journey was to get to know America again after a decade of war and discuss why combat is so incredibly hard to give up. Because hiking along the tracks is illegal, they moved with a purposeful invisibility designed to echo the isolation felt by many who return from war.

”‘The Last Patrol’ is a compelling example of the kind of storytelling that the Cinema EOS system was designed to support,” said Yuichi Ishizuka, President and COO, Canon U.S.A., Inc. “We are honored that the filmmakers selected Canon professional cameras and lenses for their epic project.”

The Last Patrol was filmed under unique conditions, especially when one thinks they are working in the United States. The men lived outdoors and carried all of their own supplies, which presented an unusual challenge for the filmmakers.

“What I needed was, basically, the ultimate camera,” said Junger. “Not too heavy, easy to use with numb fingers, good in low light, rugged if you throw yourself in a ditch, and something that delivers absolutely gorgeous cinematography.”

After searching for a camera that would produce a consistent, top-of-the-line image under rough conditions, Junger and Valdez determined the Cinema EOS C300 digital cinema camera was the best camera for the job.

“The EOS C300 camera seemed like it was designed specifically for this project,” said Valdez. “It’s a lightweight camera with a large sensor that works really well in low light. With the added bonus of being able to shoot in Canon Log, it ended up being a pretty easy decision.”

Carrying the EOS C300 digital cinema camera on his back during the entire trek, Valdez shot using only natural light while the former soldiers and combat journalists dodged rail security and hiked terrain as varied as dense wilderness and urban streets.

The images Valdez captured exceeded Junger’s expectations: “When we watched the material, I was absolutely speechless. It all absolutely glowed with a kind of meaning. That glow came from the machine we were shooting on.”

“After some days on the trek, I started looking at the camera with a kind of reverence,” said Junger. “It was incredible. I can’t imagine making this film with any camera that lacked the power and capability of the EOS C300 camera.”

Read the Interview with  Sebastian Junger at HBO