People are still screwing up field order – on national TV. 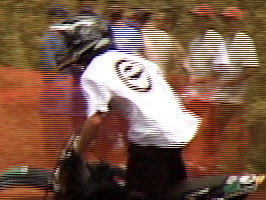 The two most-watched cable channels in our household are CNN and Speed (guess who watches which). Speed just started a new game show called “Pass Time” where several of the bumpers as well as in-show inserts exhibit the maddening two steps forward/one step back staggered motion of fields that have been reversed (maybe they thought it was a “look”…). CNN isn’t immune to this either; through the years some of their graphics have also exhibited this reversed-field judder.

This prompted us to upload an updated version of a classic column we wrote on interlacing, field rendering, and separating fields; you can find it here. But like any good motion graphics designer who tries to reverse-engineer any graphic they see on television, this has led us to speculate what might have been at the root of this particular problem.

Fields come in pairs, such as an upper field followed by a lower field (in the case of upper-field-first HDV). You need to keep the temporal order of these fields intact; if you don’t, they may play back in the wrong order, causing all sorts of motion madness.

One solution is to always separate the fields of all interlaced (but not progressive-scan) source material so that your software will treat each field as a separate entity from the beginning. But it seems a few users aren’t doing that – and that’s where problems can start to appear as you then attempt to process it through a program such as After Effects.

A similar problem can occur during rendering: If you have a D1 comp that you are field-rendering, don’t convert it to the DV format in the Output Module by cropping 3 lines from the top and bottom, or by scaling from 486 lines to 480 – you will either reverse or “mush” the fields. (Same goes for converting a 480 line comp to a 486 line render.) Either crop or add 4 lines to the top, and 2 lines to the bottom.

To convert a 486-line D1 composition in After Effects to a 480-line DV file during rendering, crop 4 lines from the top and 2 lines from the bottom in the Output Module. Whatever you do, don’t stretch it in the vertical direction!

Back to the “Pass Time” example: We’re not involved with its production, but if we had to guess, we’d bet the program is being posted at D1 resolution. We’d also bet some of the B-roll footage (which looks to be hand-held) is being shot with DV cameras, which have a different number of lines per frame. If they were to drop the DV footage into a D1 composition or timeline without separating the fields beforehand, you’d see exactly the kind of staggered motion we’ve seen in their first couple of episodes.

These problems are easy to solve – as long as you know what’s going on. That’s why we re-posted to our CMG Keyframes channel a column we wrote on fields and interlacing. The last page of the column includes a “Postscript” where we provide links to additional information, including some video training we’ve created on the subject (as well as a free 7-day pass to Lynda.com to view it).