Silhouettes and particles are two main features of this film festival promo.

As we mentioned in a recent post, we’d like to start featuring projects by other motion graphics artists, including some background on what went into their creation. First up is a promo for the Nordisk Panorama 5 Cities Film Festival 2008 created by Andr© Hedetoft. Two of the components of this promo that particularly caught our eye were the use of silhouetted figures, and the lovely particle effects.

DVCPRO HD camcorder. They changed the camera setup as needed to focus on the action (such as just on the feet, seen below), or by turning the camera on its side to best capture the length of her body. 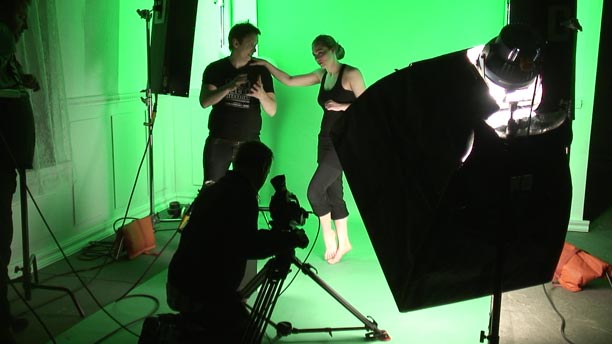 Andr© keyed the footage using The Foundry’s Keylight in Apple Shake, using a combination of a hard (for the core) and soft (for the edges). He used a lot of garbage masks to tighten up the key, as well as a touch of blur in the YUV colorspace to smooth out the resulting alpha channel. An example process tree from Shake is shown below (click on the image to get a full-size screen capture). The keyed footage was then brought into Adobe After Effects, where Red Giant’s Key Correct Pro was used to further improve the key. 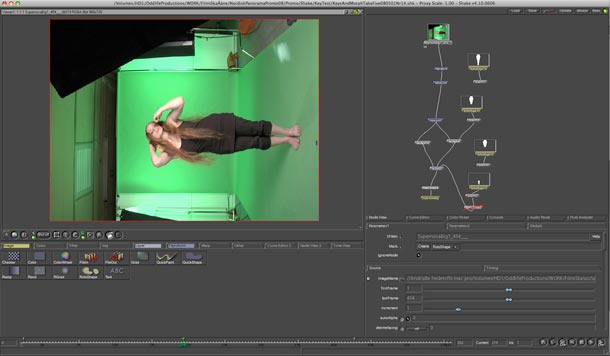 The particles were created in After Effects using a combination of Trapcode Particular and Trapcode Form. Andr© created the “tail” for the film festival logo using Particular. He tied the logo and Particular layer together using a null object, and animated the null. The backgrounds were created using Form. The “supernova” explosion is a combination of Form (used on the logo behind the woman), Particular (for the particle fields around her), plus Trapcode’s Starglow and Shine to brighten the explosion. Below is an example of the After Effects timeline during this shot (again, click on the image to see the full-size screen). 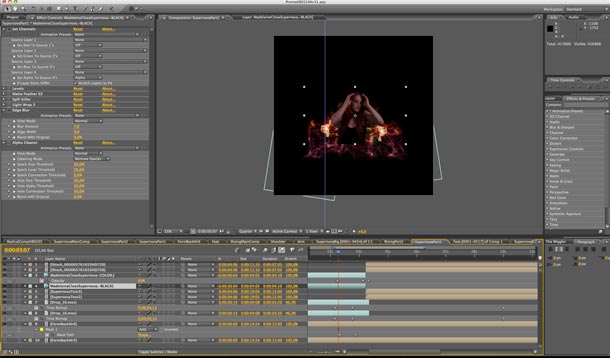 We asked whether the flames before the “supernova” were stock footage or a particle effect. It turns out that Andr© used Andrew Kramer’s Video Copilot Ink Drops tutorial employing CC Particle World as a starting point, “color corrected to look a bit like slow motion fire.” Rendering was assisted by GridIron Nucleo Pro to speed things up. The music came from Christian Wolf Productions; as it was almost finished, a local production company Scandvision with the help of Bengt Hagerman added sound effects.

If you’ve worked on an interesting project lately, please feel free to share it with us and the rest of PVC! Email us at cmeyer at the above domain (provideocoalition.com), point us at some images from the project, and give us a few details about its creation.