The sound edit is where the dialog, music and effects tracks are all laid out and prepped for mixing and for outputs. The editing of the location dialog tracks, the audio recorded on set, typically takes the most time, effort and diligence. There is a post discussing dialog editing here.

Sound editing for post audio is typically quite a bit different than the sound editing in picture editorial. Picture editorial assembles the correct sync takes of dialog from the location recordings, adds required sound effects as well as the temp music, but the emphasis, of course, is based on picture. Often, just by nature of the process, the sound can be hastily cut and added and the mixing is generally only very perfunctory. Makes perfect sense since it’s all about the picture.

As discussed in a prior post here, the audio deliverables typically won’t easily translate from picture editorial’s sound edit. A very specific set of tracks and layouts will be needed to properly route the audio for final mixing and for the final deliverables and stem requirements for any given show.

Pro Tools, the digital audio workstation (DAW) that I use, has the ability to create a template file that you can cut the media into. I create a template for each show that I do, tweaking things to make it easier as I go from edit to mix. In general, however, the templates all have similar attributes. In editing the usual elements of post audio – dialog, music and effects – it’s important to edit recordings onto tracks that are routed in a certain way and might have filters or processing to affect the audio on those tracks.

This example below includes a number of different dialog tracks. In this case there are “interview” tracks, a “foul” language track, character’s dialog tracks and a phone track. I use a standard set of processing plug-ins, that I may or may not reach for on any particular track, depending on the source and the usage. These are all set to unity, meaning that signal passes through without any processing. These settings change as the show gets mixed. 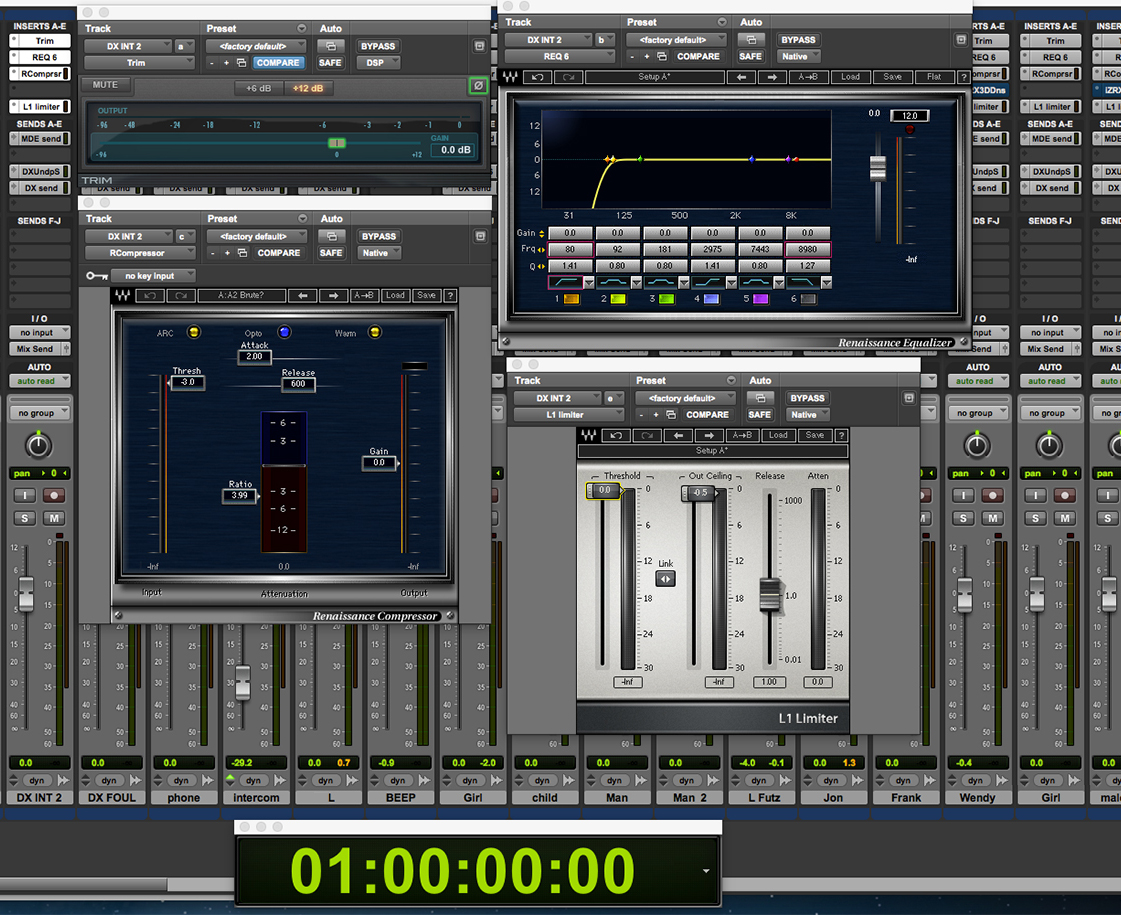 In Pro Tools, the plug-ins work in the channel strip from top to bottom, affecting each other in a cascading fashion. For this example, at the top there is a trim, which will add or attenuate gain on the signal from the track. This is followed by an EQ, then a compressor, and then the final part of the chain might have a limiter. Depending on the program and the sources running through the track, additional plug-ins or different EQs, compressors or limiters might be used.

The audio deliverables will fall into any combination of the dialog, music and effects sub-mixes of the full final mix. This means that the layout of the sources need to be routed to their correct final destination. In picture editorial, you could have an audio track with sound effects at one time code, and that same track can also have music recordings on them at a different time code. For mixing, these would need to be separated onto discrete sound effects tracks and separate music tracks for proper mixing.

There are a number of useful, specific tracks that can be created and used for the mix. For instance, a telephone dialog track is very handy if there are a number of phone conversations in a scene. This phone track, often called a phone futz, has plug-ins set to mimic a phone. I have a more complete post on EQ here. Once the futz is set, then you only need to copy the “telephone” dialog recordings to these tracks. Any sounds played through that track will sound as if sent through a telephone.

Futz tracks are also used for music and for effects tracks. These are always dependent on material but, for instance, if music playing in a car radio is used often, a musical futz track can be created for that. Whenever the music needs to sound as if from a car, edit the music onto the music futz. 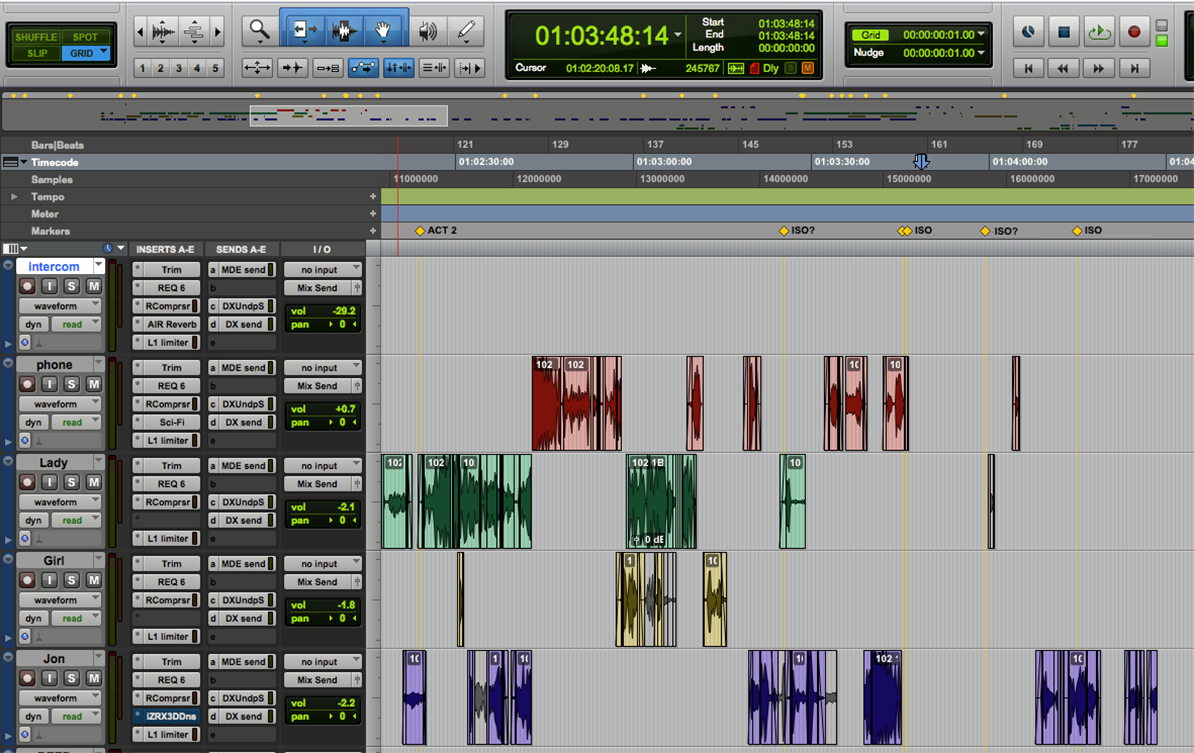 In the example above, the top track is an assigned “intercom” track, set with processing to sound as if from an intercom. The track below that is a “phone” processed track. Cut the dialog to those tracks for the correct effect. Cutting by track lessens the need to process the various audio clips separately. 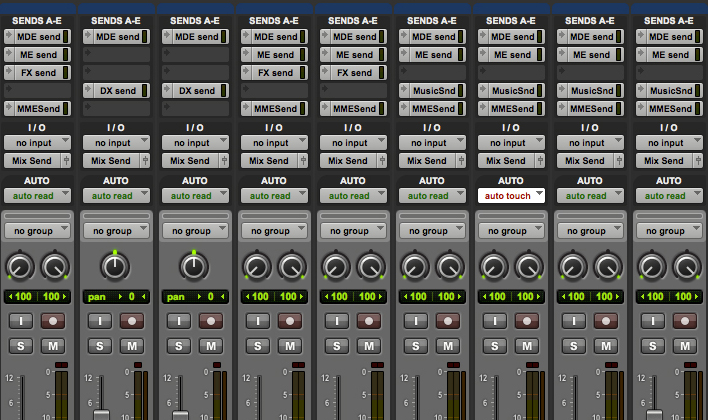 In the example on the right, a stereo mix, I’m using a series of sends and returns to route the audio to their respective places. Here the main outputs of the tracks all go to the mix send. From there the audio is sent to whatever place it needs to go. The dialog tracks go to the main mix but are also being sent to a dialog sub-mix and the MDE or the mix minus track. The sound effects are being sent to the effects sub-mix, the music and effects sub-mix (M & E), the MDE and a mono M & E. You can also see the music tracks are sent to the music as well as the M & E, mono M & E and the MDE. By the way, the “return” of those sends are the final mix record tracks.

This system is simple to set up and allows for simultaneous creation for the final required sub-mixes. There are many ways to set the routing up, all dependent on the final needs. If there is a surround mix, you may need to also fold down that mix into stereo and other outputs. Signal routing is a much larger subject to tackle due to an almost infinite number of possible stem outputs. 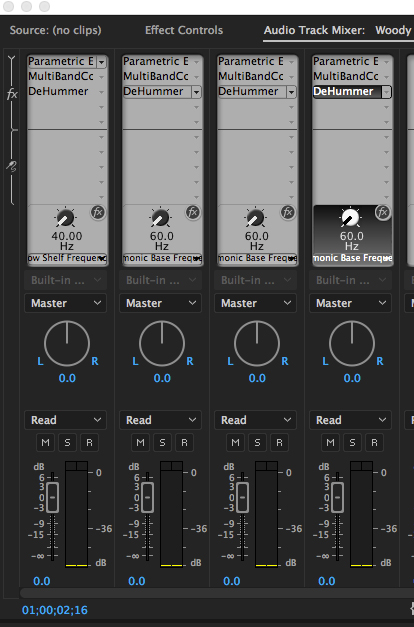 By laying out the tracks in this logical manner it makes for easier mixing. Although, this type of sorting is necessary in post audio it is also easily used in a picture editing program. This is a screen shot from Premiere Pro. These are dialog tracks that have a processing chain applied to them similar to what is shown above. Take advantage of the mix modules of popular editing platforms that allow for the same sort of usage.