29.97p is a vital framerate for producers in ex-NTSC countries. I’m glad Sony has recognized this fact and is finally adding it to the NX70. 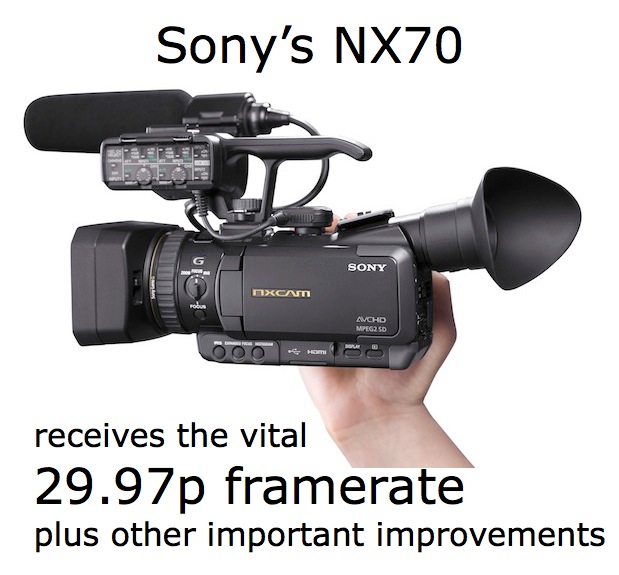 Sony has just announced that the NXCAM camera model known officially as the HXR-NX70 (often followed by a regional suffix) -but colloquially known simply as the NX70- will receive the vital 29.97p framerate via a free downloadable firmware, sometime in the first quarter of 2012. Well, let me get a little more specific: The 59.94Hz segregated versions of the NX70 will get 1080PsF29.97. This article will explain how vital this framerate is for many producers in ex-NTSC countries, and cover some other improvements included in this update, together with a few that are still missing.

This is not a review!

This article is not my promised NX70 review. That will still come sometime in the future, after Sony sends me a review unit, which has been promised by Sony, but has not arrived yet. This article is simply about the additional framerate added to the 59.94Hz segregated version of the NX70, its vital importance, and the other improvements included in the firmware update.

This article is not part of the PsF’s missing workflow series!

This article is not part of the PsF’s missing workflow series, which will continue very soon (and there are several episodes pending).

Framerates the NX70 (59.94Hz segregated version) has had so far

So far, the 59.94Hz segregated version of the NX70 has included:

Even though 1080/59.94p is not recommendable for general distribution (no over-the-air HDTV ratified standard supports it; Blu-ray video disks don’t support it; I wouldn’t presently recommend it for the web), here are some reasons why you might want to shoot in this mode:

There was a time when -for non-dramatic TV productions that weren’t going out to film- my favorite combination (for the sake of smoothness) was 720p50 (ex-PAL countries) or 720p59.94 (ex-NTSC countries). The reason that it was my favorite is because it offers the absolute smoothest progressive playback. The reason I stopped recommending it will be quite familiar to anyone who read (and remembers) my 2010 article Why the iPad will dictate your shooting framerate & shutter speed. To summarize:

That’s why nowadays I generally recommend production framerates between 23.976p and 29.97p (which of course also includes 25p), unless you are specifically producing for networks like ABC, ESPN, Fox News, Fox Sports, NRK, VRT or some other network that broadcasts 720p50 or 720p59.94 due to their preferred emphasis on temporal resolution over spatial resolution, which certainly has its merits. If you are, then of course you can shoot 1080/59.94p (for those in the ex-NTSC countries) or 1080/50p (for those in the ex-PAL countries) and then simply downscale to 720p while retaining the exact original framerate. (The new firmware for the 59.94Hz versions of the NX70 will also add 720p59.94, so the downscale will no longer be necessary if that’s your situation. Presumably, 720p50 will also be added to the 50Hz versions of the NX70 via a similar firmware update. At publication time of this article, there is sadly still no word on a WorldCam update or version of the NX70, but we can still hope!)

If you are in an NTSC or ex-NTSC country (like the USA, Japan, Canada, or any Latin American country other than Argentina, Paraguay and Uruguay) and want a dramatic “24p” look (or would like to transfer your video to 24fps film fairly easily), then by all means, shoot in 23.976p if you are shooting tapeless (or, if you are shooting on tape, see my 2008 article When 25p beats 24p…). However, if you are in an NTSC or ex-NTSC country (and want to produce the smoothest HD possible (without having a consistency problem when your video hits a tablet or phone, as explained in the prior section), then 29.97p is probably the absolute best progressive framerate for you. It’s relatively smooth, plays back fine on the iPad and iPhone, and plays fine on the web! (23.976p and 25p also play fine on the iPad, iPhone, and on the web, they’re just not as smooth as 29.97p.) This is probably the reason why Sony has decided to add 29.97PsF to the NX70. Perhaps its absence up-until-now is the reason why they hadn’t shipped the promised review camera to me so far. Who knows…

Other improvements included in the NX70 firmware upgrade

In the USA, Sony is adding the following improvements to their regional version of the camera: